About 12 years ago, when I moved into my current house ius when i first noticed them, I started to observe what I came to call the "march lights", fast moving lights, that are not conventional aircraft, generally moving sw to ne then east. They make large sweeping s turns and sometime seemed to appear out of nowhere.
I wonder if these are related


Late last week, a curious alert appeared in the Federal Aviation Administration's database of Notices to Airman, or NOTAMs, which, among other things, alerts aviators to chunks of airspace that are temporarily off-limits. The details strongly point to the comings or goings of a high-flying aircraft between either Area 51, also known as Groom Lake, or the Tonopah Test Range Airport, two of the U.S. military's most closely-guarded flight test facilities, and the Pacific Ocean to the southwest of San Francisco, California.

The NOTAM, which was first pointed out by users of the Dreamlandresort.com message board, was issued on March 12, 2021, but was only active between 5:45 PM and 8:15 PM local time the following day. This is a very odd time when military aviation training and test activity is usually at a minimum. The notice outlined a path 20 nautical miles wide and 426 miles long at an altitude between Flight Level 450 and Flight Level 600, or 45,000 to 60,000 feet. The exact route, defined by a series of named waypoints, can be plotted using tools available on the website ForeFlight, as seen below.

posted on Mar, 17 2021 @ 12:33 PM
link
I was in an FA-18 squadron in the early 90's. They could be controlled remotely back then I know that much. Never seen it happen but I know it was capable. Assuming these are unmanned flights in nature. Testing more high altitude aircraft...meh. No idea but this would make sense. Spying on citizens, monitoring threats from way above.

posted on Mar, 17 2021 @ 12:42 PM
link
Back in Sept. I caught this interesting thing. I had gone out to empty the trash and saw this moving in the general sw-ne-e path of the march lights, though this is a little slower than they usually are.


When I first saw it I checked to see if it may have been the ISS, which by the way had made a pass about the same time, buuut, 2 things; this light made two turns and this was during the week when the nearby creek fire exploded.
The smoke from the fire had brought visibility down to less than a quarter mile and had nearly complexly blocked out the stars.

I'll keep an eye on this. The only drone in the last week I've seen has been further South at NAS Point Mugu. The night's of the 11th to the 15th there were a number of military aircrafts squawking 7700 and showed no signs of difficulty flying stable. Those squawk signals remained on for the duration of those flights which lasted hours. One of the 7700 was out of the Tonapah area. I assumed it was training. There were 2 Dassault Mirages out of Nellis that went north to Tonapah then west over California. The other at that time was an F-35 from nellis that didn't leave north Las Vegas sqawking 7700 doing low altitude turns at good speeds before returning to nellis. Surprised nobody called to complain.

Here's the F-35 in red, the 2 yellows are the Draken dassault mirages. 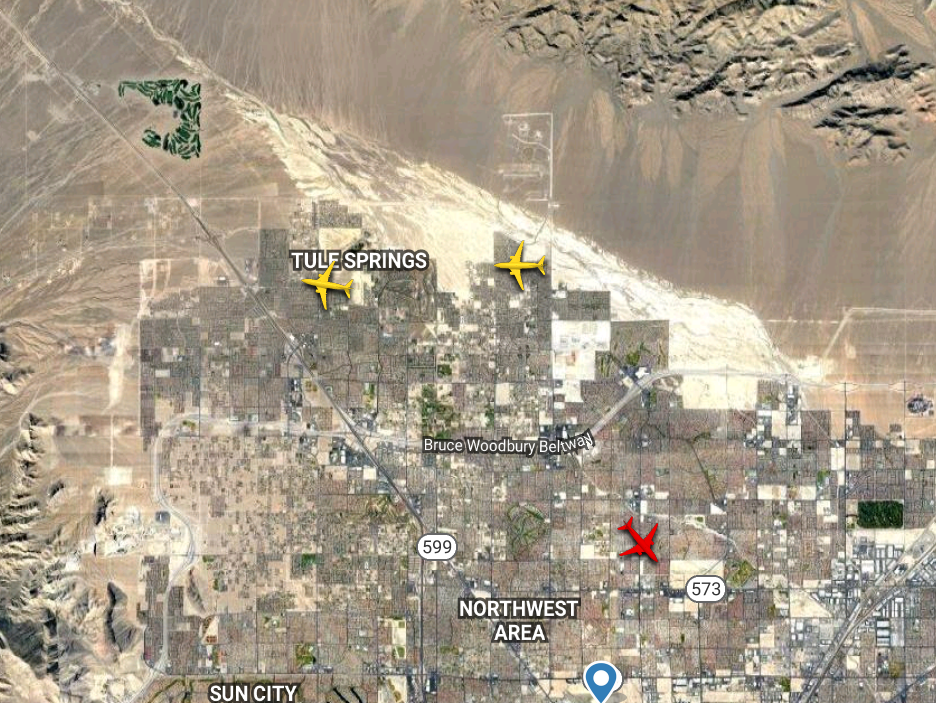 they went north then turned towards Monterey. The F-35 RTB 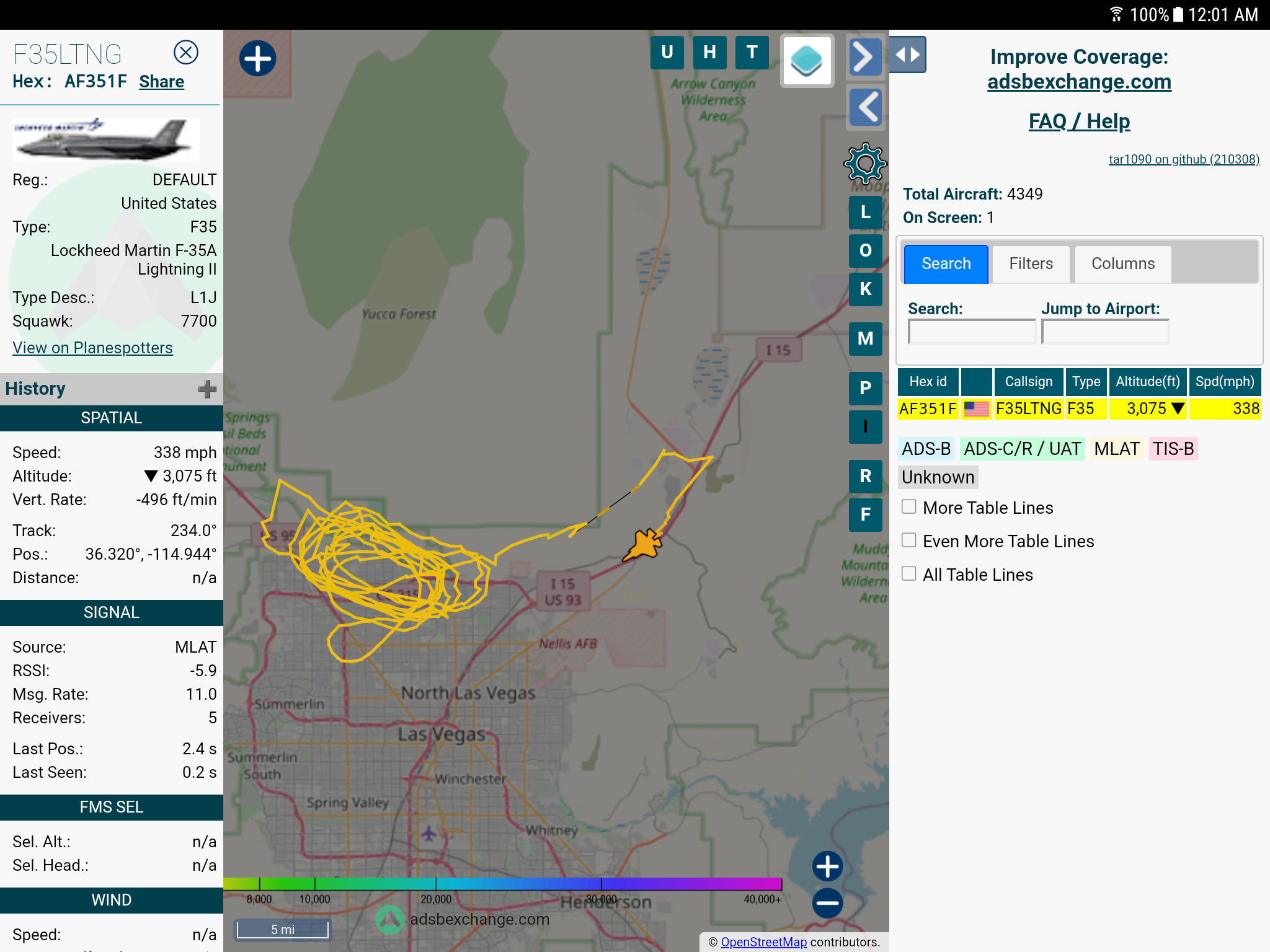 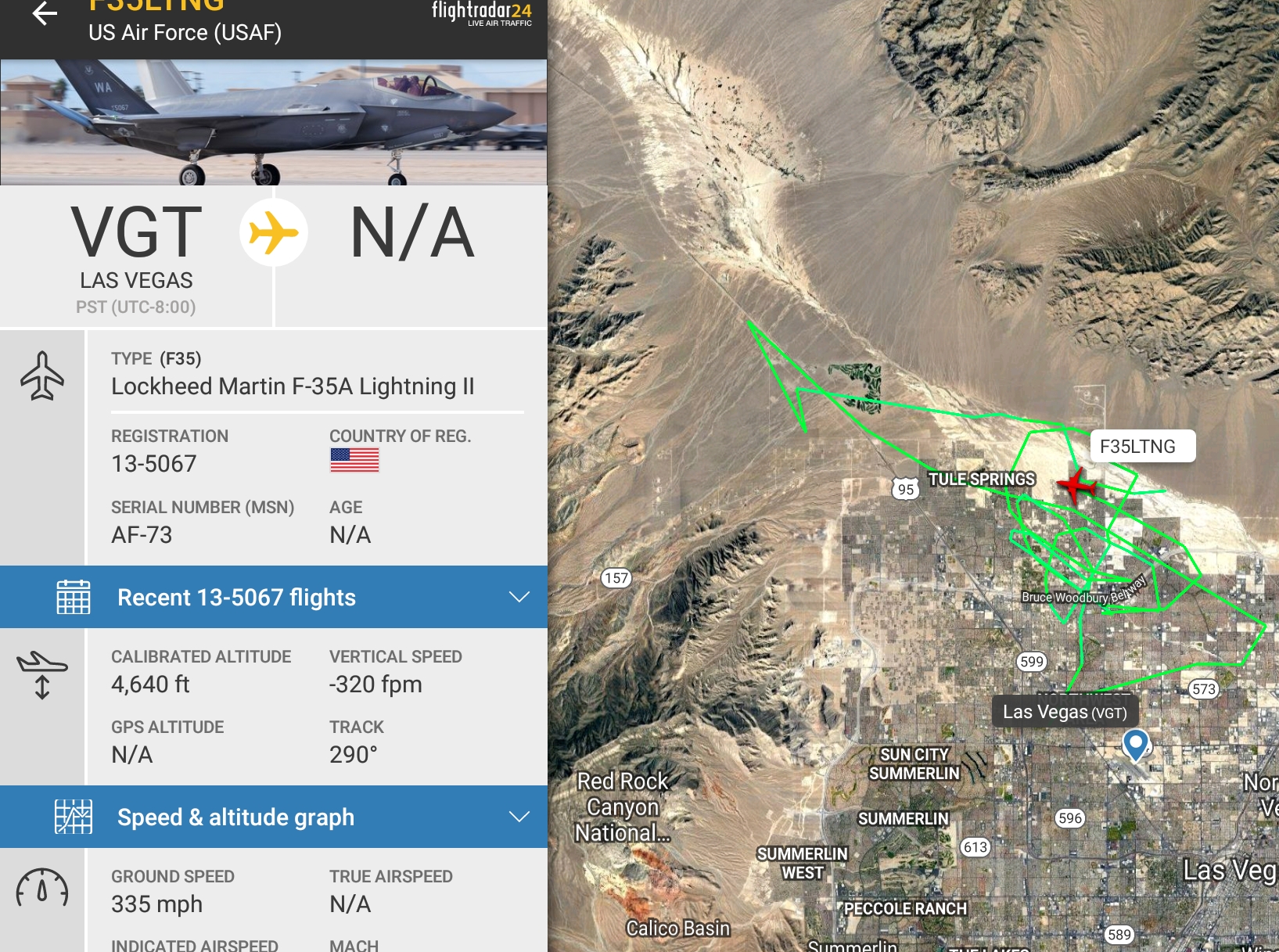 This was very late of the 11th into the morning of the 12th. This went on for a few nights. Mugu had the only noticeable drone on radar during this time around 500 ft.

Edit: this currently right now at 2:33pm est is what I'm watching off the coast. 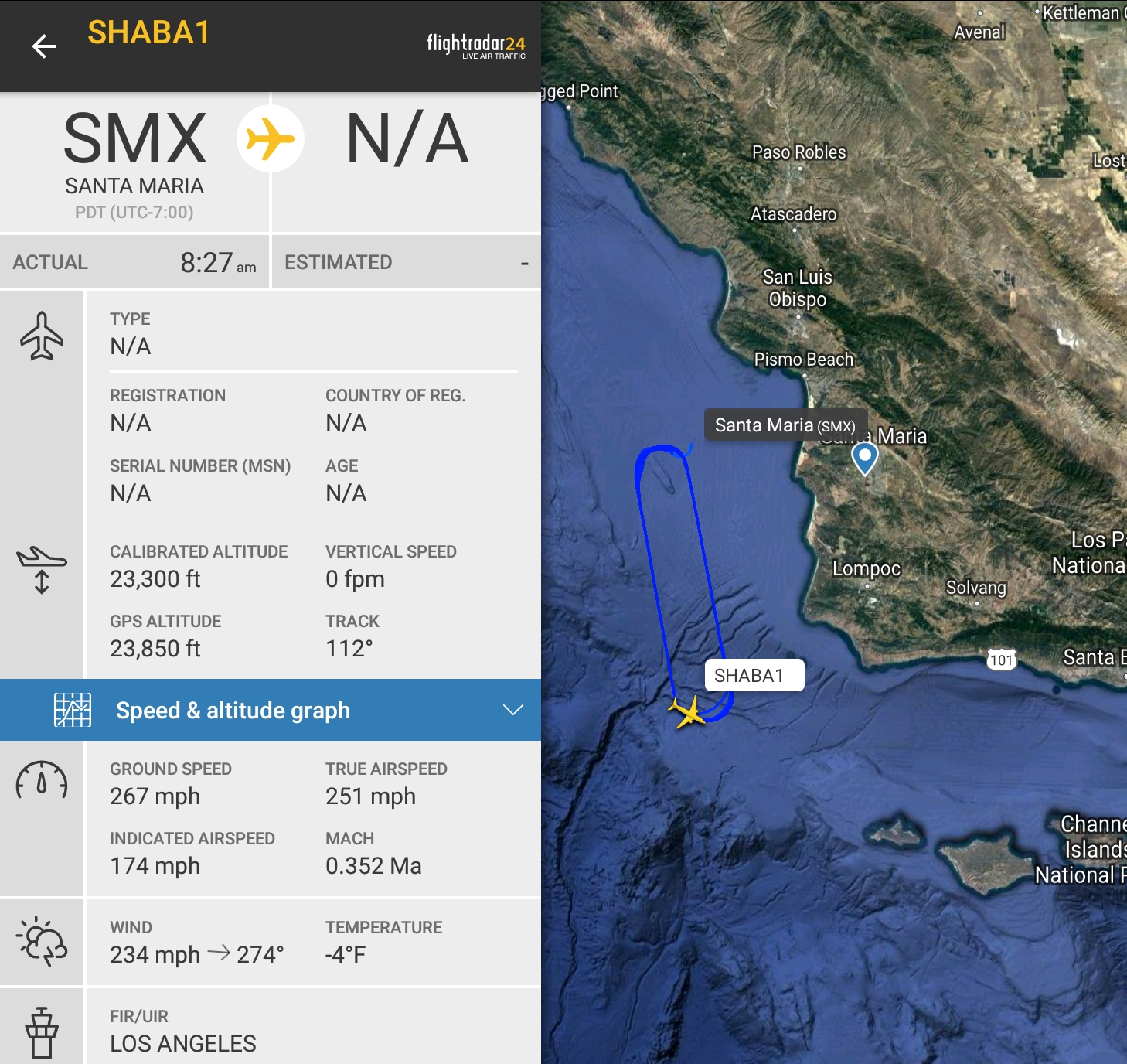 Pretty sure I heard the F-35 but never could see it. Pretty sure that was during one of the recent rainy spells we've had here, its actually been pretty cloudy here lately.

March 11 2021 at 11:31pm est is the screen grab time stamp. That would have made it 8:31pm in Las Vegas. I checked the North Las Vegas message boards and saw no complaints of the low flight.

Do you usually get nellis traffic loitering there? I'd be shaking with excitement looking for that sight😆

No...and I have been living within 5 miles or so from a commercial airport here and in Nashville and got really good at picking out the military engine from the regular commercial traffic. The flight path was for sure on the less populated area of vegas though. Usually if you wanna catch cool traffic you have to sit by nellis as most flights seem to go north west out to the ranges. It makes me miss living in VA beach...they flew wayyyyy more training over the city there...but this is friggin nellis. Can't think of too many other air bases launching cool stuff you can actually go see!
edit on 17-3-2021 by RickyD because: (no reason given)

I've seen the S turn aircraft. It's manned from what I've been told. I believe it's doing that to slow down sort of like the old space shuttle did. That tells you a little about where it was. Zaphod may chime in on this one.