I tossed this thread in the mud pit as it is indeed mud and a total disinformation play on most Americans as there is ZERO press coverage. It was so sanitized that I had to use my TOR browser to go onto the United States Department of Interiors Web Page to look it up to determine whether the original story I read on Washington Examiner wasn't FAKE news. Well it wasn't. I bet you haven't as I found only ONE article on it as I was doing research on stocks this fine Sunday 07Mar21 morning. I went deep. I dredged and drained and found the above story. I never heard of it. Why was this story NEVER reported? So if you are a card carrying progressive liberal or anything else and and hated him just ask your self why this great story was kept from the world and all Americans?

Why? So go ask Greta and AOC and others like Bernie; why?

Trump administration approves largest solar farm in US, expected to power 260,000 homes by Josh Siegel, Energy and Environment Reporter | | May 11, 2020 03:09 PM Print this article Sign up for Daily on Energy The Trump administration approved a proposal Monday to construct and operate the largest solar power project in U.S. history, issuing a final permit for a massive facility just north of Las Vegas. The $1 billion Gemini project would be the eighth-largest solar facility in the world, the Interior Department said, generating 690-megawatts of power, enough electricity for 260,000 homes in the Las Vegas area and potential markets in Southern California. Nevada utility NV Energy, a subsidiary of billionaire Warren Buffett’s Berkshire Hathaway, is providing financial backing to the project, which will be completed as early as 2022. It will generate more than $3 million annually in federal revenues, the Interior Department said. The Trump administration cast the decision as representative of its “all of the above” approach to increasing U.S. energy production on public lands, which critics say has been mostly focused on fossil fuels. President Trump has frequently criticized renewable power, questioning its reliability. The administration also touted the project as a job-creator for an area hit hard by the coronavirus pandemic.

Because if you really think about it anyway you try to explain it its simply wrong. Google? NPR? Go look it up. That's why I took a screen shot of the US Department of The Interior Bureau of Land Management web page. To to prove to those others out there it actually exists.

US Department of the Interior Bureau Of Land Management

Well as I listened to all the loudmouths in government and MSM over the last four years I though that he was a Coal and Oil guy out to trash all national parks and monuments. That he hated the environment and was against all things to reduce CO2 in our country and atmosphere.

This one story will show show how corrupted our world has become as it reaches beyond all. Or is this story hidden intentionally and to be credited to someone else? Think about it. That's why I launched this thread. 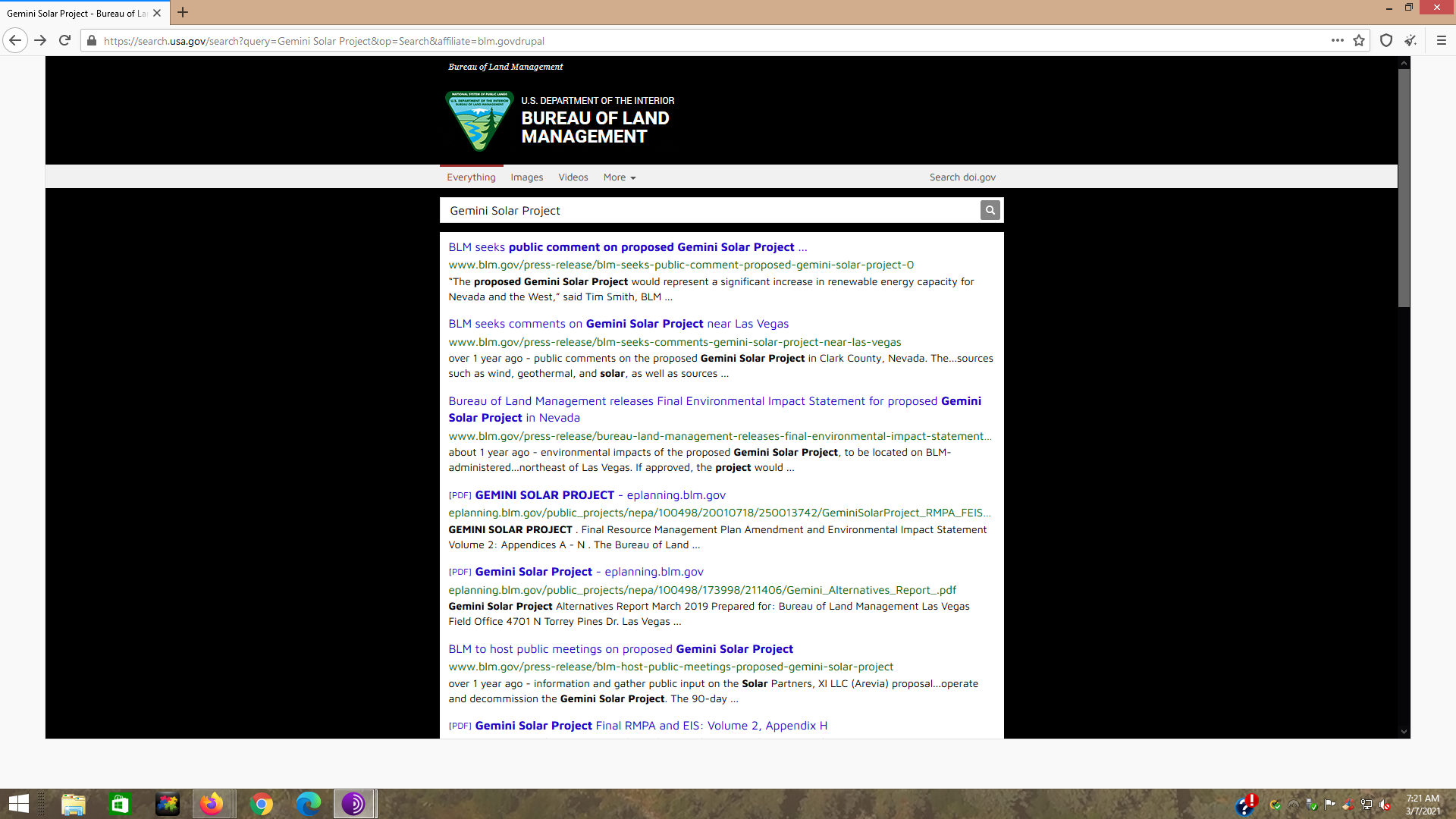 This country is NUTZ


The fact you decided to use for is amusing.
I found this in one search using NOT tor easily.
And also that bid is and always will be complete crap.
Maybe read more into it.

nope! the solar farm will totally replace every bit of the oil needed. it will power up all those green charging stations that litter the landscape to power all those electric cars. As long as we have sunny days, that is.

You make me smile bigley.

First of all I don't care for Trump nor that little girl Greta. So why is she over here and NEVER touted the largest solar project ever in the USA?

You know the answer but you wont tell us.

You found what in one search? Stories about the Gemini Space Program in the 1960's

I was against the XL pipeline as its unnecessary. All cars in USA will be solar power by 2050. That's what is being reported in stock reports among all solar battery manufacturers.

USA also needs to ween itself off Cobalt for solar batteries. Possible replacement is Manganese. Matter of National Security
edit on 7-3-2021 by Waterglass because: add

There were plenty of articles about this...and crediting the Trump administration...going back through feb-may of 2020.

I don't see why you think MSM has to be involved in NOT reporting it. This is news from last year.

Is that you Joseph Robinette Biden?
How's the Alzheimer's?

Except no sun during nuclear Winters after the bombs fly...o course we can store some....


I don't see why you think MSM has to be involved in NOT reporting it. This is news from last year.

THIS WAS A MAJOR NEWS STORY AFFECTING THE EARTH

Who gets their MAINSTREAM USA NEWS from the Smithsonian Magazine and all the small viewership, compartmentalized and other pay subscription sites. That only get minimal viewership.

When you say that the " Trump Administration Approved" it, what you really mean is that they didn't block it.

The only part that the Trump administration played was to sign off on them using public land. In reality this was a joint venture between Warren Buffett and a public utility company called NV Energy.

This happened under Trump's watch but in reality it would probably have gone ahead regardless of who was in the white house.

And this most definitely was reported by the MSM. LAST YEAR

This is an old news story.

originally posted by: Waterglass
a reply to: sunkuong


I don't see why you think MSM has to be involved in NOT reporting it. This is news from last year.

THIS WAS A MAJOR NEWS STORY AFFECTING THE EARTH

Who gets their MAINSTREAM USA NEWS from the Smithsonian Magazine and all the small viewership, compartmentalized and other pay subscription sites. That only get minimal viewership.


Well, it WAS reported by Bloomberg

NPR also reported on it www.facebook.com...

WSJ also reported on it www.wsj.com...

I can't be bothered to check the others but I think that at least half of them probably did.

Thus was a MAJOR international story that was tamped down.
edit on 7-3-2021 by Waterglass because: add

posted on Mar, 7 2021 @ 09:05 AM
link
The Biden Democrats and their allies THE NWO will be taking credit in increments as needed 🦥

You are still blinded by floating and flashing pictures of Trump 🤣

The pipeline is not necessary in my opinion. It would also dent the "fracking" sector.

USA and globe will morph from oil to solar cars by 2050. Possible homes also.

Powerplants to generate electricity for solar and electric cars and USA grid can morph into Hydrogen. That plant can be built next to the current plant.

originally posted by: Waterglass
a reply to: AaarghZombies

Thus was a MAJOR international story that was tamped down.


Not really. It was a major story in the Las Vegas region, which is why it was covered heavily there. Please explain why this story has international implications and why they would be MAJOR.

Only if you are an eco-tard that does not mind freezing in February like Texas did because they were using a large amount of solar and windmills installed WITHOUT the essential fossil fuel backup generators as is standard engineering practice, as basket weaving degree ecotards think, wrongly, they know better how to design an electrical grid than engineers.
edit on 7-3-2021 by M5xaz because: (no reason given)

posted on Mar, 7 2021 @ 10:31 AM
link
a reply to: M5xaz
He doesn't care. He's a foreign instigator that has somehow been personally affected by America.

But don't touch those crumpets or he may actually get a backbone.

Page after page of news stories about the Gemini Solar Project