He continued, “Well, I think there is all the difference in the world. I’m being slightly sarcastic here. There is a difference between getting the vaccine. I am not surprised that the system is rigged in Florida to favor wealthy people. I think it is a basic instinct of people like Ron DeSantis. I’m surprised he didn’t say, of course, I did. Everything I do in my administration is to serve wealthy people. You know, you can see that in public policy time and time and time again. And, you know, you look at all these voting rights cases. They’re not trying to stop wealthy people from voting. They’re trying to stop, you know, middle and lower middle class, people, African American people, Hispanic people, immigrants, anything else. That’s who they’re trying to stop from voting.”

I'm willing to let anyone get in line ahead of me for the vax (not really a vax). How long is this nonsense gonna continue to play out?

Still LMAO. At least he admits he's being sarcastic.

PraetorianAZ
+14 more
posted on Mar, 5 2021 @ 08:53 AM
link
How do you get poor people to line up in droves and take an experimental drug? Make them feel like they are missing out and the rich get the shot first. Watch how quickly they demand the same things the rich get. Idiots.

network dude
+1 more
posted on Mar, 5 2021 @ 08:58 AM
link
I heard Desantis on this. He said they concentrated on the elderly first. He didn't mention checking their bank balance before getting the shot. If Carvill has that information, it would offer validity to his case. If he doesn't, then it sounds like he an idiot.

I don’t believe that’s really the case. Money be damned. My wife and I along with most of the people I run with, will gladly step out of line and let our shots go to someone else.

posted on Mar, 5 2021 @ 09:19 AM
link
a reply to: network dude
I wonder if they offer a "quick will kit" along with the consent form for vaccinations.
Something leaving their assets to the state in case of death?
"Just a standard form sir, just sign here and you'll get your shot right away"


i guess he figures that dems and clintons don't favor rich white folks.


he use to have a snake head when he was younger, now he looks just like a old fool that is nothing but a joke. glad he's a dem. i use to joke he was one of them reptile aliens you hear about.
edit on 5-3-2021 by hounddoghowlie because: (no reason given)

posted on Mar, 5 2021 @ 10:32 AM
link
Who are these retards fighting over an untested tweaked version of an already rushed vaccine for a disease with a 99.9+% survival rate?

I had an appointment for a blood blood test at my general doctors office, there are several doctors in the building. I showed up a little early and there was a hospitals ambulance in the staff entrance and a hospital administration car in the main entrance. I have never seen this before and did not realize what was going on.

When I went into the main entrance, some of the questions had changed. They are now asking if you have tested positive for 6 weeks, it was 2 weeks just last week. While waiting, a line formed on the other side of the lobby for getting the vax. Last week, there were signs on the front door saying they did not have the vax yet.

I think someone had a bad reaction to the vax just before I arrived and they were stabelizing them and getting the paperwork straightened out for transporting them the two blocks to the hospital.

I had talked to several nurses and other staff there in the past couple of months to casually find out what they thought of the vax and most don’t know any more then the average news report. I did not talk to my doctor about it as she had a student with her and I didn’t know how the student would react to the questions.

I did notice a different fealing than usual when dealing with the office staff there. Like they knew something they were not allowed to talk about.

I do think the rich people getting the vax first is to make others want to get it more.

We are indeed living in strange times.

originally posted by: Asktheanimals
a reply to: network dude
I wonder if they offer a "quick will kit" along with the consent form for vaccinations.
Something leaving their assets to the state in case of death?
"Just a standard form sir, just sign here and you'll get your shot right away"

Given what I've read about the number of deaths following vaccination, they could probably crunch the numbers and make it quite lucrative...

It wouldn't be the first time government critters bet on the lives of people.

There isn't anything off limits anymore about the stuff they will make up to divide the country and create a civil war. It seems they are itching to incite a civil war.

I agree, it's the same with saying there is a shortage on the vaccine. Hardly anyone was at the drive thru vaccine clinic set up here until the news said there was gonna because shortage and shipping problems.

The next day the place was lined up 3 blocks with cars all day, people wanting the vaccine all of a sudden.

originally posted by: hounddoghowlie
a reply to: Snarl


i guess he figures that dems and clintons don't favor rich white folks.

originally posted by: beyondknowledge
I think I had my first actual experience with the covid vax yesterday. 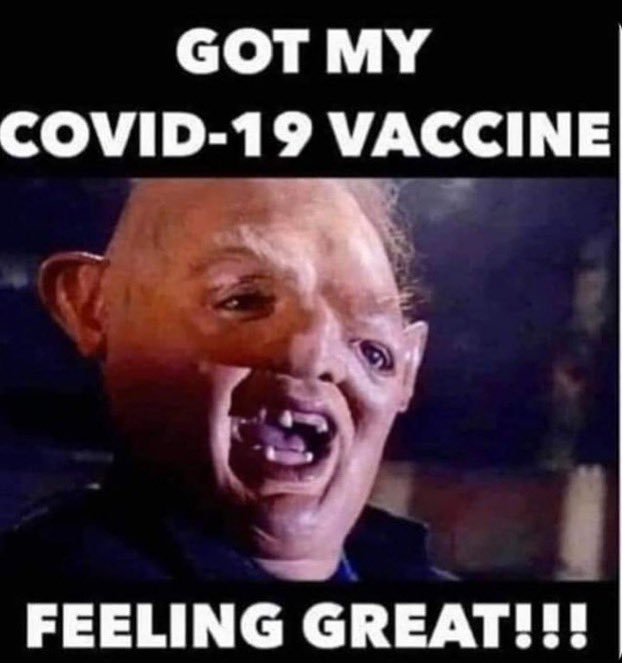 Why God Allow it?

This is sadly the mindset we're up against.

What does it profit a man to gain the world and lose his soul.

posted on Mar, 5 2021 @ 11:09 AM
link
a reply to: Lysergic
James.
Pure religion is this, to help the orphans and widows in their affliction and to keep oneself unspotted from the world.

posted on Mar, 5 2021 @ 11:10 AM
link
a reply to: Snarl
Personally, I think politicians should be required to get the vaccine first on camera and be observed for a few hours after by the public. The real one, not a placebo. Let them lead by example.

Why would God allows the atheists' CCP to do this to the faithful?

originally posted by: Klassified
The real one, not a placebo. Let them lead by example.


If the shot didn't hurt like Hell ... or make you sicker'n a dog for a couple of days after ... you got a placebo (or a regular flu shot). Who really knows what's in those little vials anyway?

posted on Mar, 5 2021 @ 11:19 AM
link
So the GOP has been saying all along give it to the high risk first as in 70+ and people with serious health conditions, and first liners that are around these other groups as part of their job. That is about it....

The Liberals started the whole poor people first, black people first, teachers first, so on and so forth. Why does the left come up with these stupid statements and then try to throw their stupidity back on the Right?

For the left it seems to always come back to the evil rich...Its their mantra in everything...geez