posted on Feb, 18 2021 @ 05:39 PM
link
A man, I don't know what possesses him to do what he is doing, but he follows and attacks a Sheriff until the Sheriff can't do anything but shoot to defend himself.

This is VERY graphic, if graphic stuff bothers you, please don't watch it, just read it. There is language in this too by the videographer...

Also, if the MODS decide this is too much, I definitely understand, remove it at will.

Again, this is really graphic, BUT, it goes to show you that even though you have a gun and someone comes up to you and wants to do ill will, we usually think that all we have to do is 'just shoot him' well, I guess sometimes it's not as easy as it might sound.
You don't see the man die, but he is definitely on his way.
The ONLY reason I am posting this because as a legal carrier of a firearm I feel this can help someone 'see' what can happen, it's not just BLAM-BLAM-BLAM! and you walk away.
This is pure insanity, crazy stuff.

"A crazed man’s rampage came to a not-so-sudden end Saturday morning in Montgomery County Maryland, and a bystander caught it all on video. After striking a lone deputy twice with a long stick, the attacker took a dozen rounds while still advancing on the officer.

It looked like the stuff of nightmares. The attacker looked more like a college professor with his sport coat and khaki pants than a would-be cop-killing lunatic. The wicked grin on his face added a freaky, horror-film feel as the man just kept advancing on the retreating deputy. That was after he broke a long piece of wood with a couple of blows over the deputy’s forearm.

The story from WUSA says the man caused a couple of accidents by ramming other vehicles before the deputy arrived.

The incident happened around 8 a.m. Saturday. Montgomery County police received several 911 calls Saturday morning of a man driving erratically in the area. Police Chief Marcus Jones said two cars were struck by the driver before the deputy arrived on the scene.

The deputy attempted to deploy his Taser, according to Popkin. When he wasn’t successful, the deputy shot the man, the sheriff said."

posted on Feb, 18 2021 @ 05:51 PM
link
Could be someone came home and found their wife with another man or some other heartbreak that cause a suicide by cop.
I didn't watch.


Edit: disregard, you have the full footage from the bystander's cellphone

The Suspect just kept coming even after being shot 12 times. Brutal video...


An incident in Maryland in which a driver attacked a deputy sheriff with a stick before being shot to death was caught on film by a witness. The man can be heard calling on the deputy to use his gun.

The fatal shooting happened near the town of Laytonsville in Montgomery County on Saturday morning, according to a police account of the events. The man that ended up being killed was driving erratically on the road to Olney, running one car off the road and into a telephone pole, and colliding with another vehicle before coming to a stop.

“He immediately got out of the car with a very large wooden stick of some sort with a very large piece of wood,” Sheriff Darren Popkin told the media. “He started going after the vehicle that he had just ran into.”

At about that time, the deputy sheriff arrived at the scene, and the last seconds of his confrontation with the person was filmed by a driver. The disturbing footage shows him coming at the officer with a stick and taking a swing at him, breaking it against his left arm and tossing the remaining piece at him.

The deputy sheriff then opens fire at the chest of the assailant, who takes at least 12 shots at point blank range. The man collapses on the road, with blood visible on his clothes and lips.

The person filming the incident can be heard saying the man is “about to get smoked” at the beginning and then repeatedly shouts out to the deputy sheriff: “man, shoot his ass!” When the deputy finally does, the person seems genuinely surprised by the outcome, exclaiming: “Damn! Oh, Shtt!” He apparently gets over the shock and says, “That’s what his ass gets! That’s the #t I like to see!”

The shooting victim was a white male who appears to have been in his late 40s. A longer version of the video that is not available on the account anymore includes several more seconds of the footage, in which the person filming says: “Thought his ass was privileged.”

The police said after the encounter that the deputy sheriff was taken to the hospital with a superficial arm injury and back pain. He is expected to be released on Sunday and will be placed on administrative leave while the incident is being investigated. The shooting victim was pronounced dead at the scene. Neither was immediately identified.

Before the shooting, the deputy tried to use his taser to subdue the erratic driver, according to the Montgomery County Police Department, but was not successful for reasons not immediately determined.

I watched it. Dude was obviously ripped out of his mind on some uppers, to not realize he had an entire clip unloaded in his chest.

Before watching, I expected a younger fellow. This guy had to be close to 60.

Who knows what kind of emotional trauma set him off. But there is no question he was hopped up on something or an alphabet soup of something’s. He didn’t even flinch until the last couple bullets.

posted on Feb, 18 2021 @ 06:10 PM
link
Good video and example, cop should have shot him the second he started advancing. He was to slow at shooting this man in my opinion.

posted on Feb, 18 2021 @ 06:33 PM
link
I just believe that the cop 'had to shoot' him, he sure didn't look like he wanted to.
If he wanted to at the beginning, to me, that would mean that he shouldn't even be a cop.
Like what was said, something triggered this guy, he could be a doting Grandfather to someone, maybe he had some mental problem, the fact is, he doesn't appear to be a gang-banger, I'm sure that his family will miss him, probably, maybe not. Maybe this isn't the first time that he's gone 'different'.

Anyway, it was really graphic, you don't see that many videos of that kind of stuff, and I do understand, but sometimes it can be beneficial showing it, it might help other cops if they see this, this should be in a training video at the Academy. They probably already have one like that though.

I carry a 9mm, that is probably what that Sheriff had too, so that goes to show you that even a 9mm won't take someone down, well, immediately.
I once saw a cop that carried a LOT of magazines, (like...4?) just in case, one day, out of the blue went through them in a giant gunfight. Of course, I can't remember what it was now, but he told his story that if you don't have it, and need it... Well, the rest is history. I carry one in pistol and one on my belt. Hopefully I never need it, and if I do, I hope I don't run into this kind of guy.
edit on 18-2-2021 by recrisp because: (no reason given)

posted on Feb, 18 2021 @ 07:48 PM
link
Wow.. that was bizarre.. I wonder what was going on with that man.. brutal to watch.. Hopefully he is at peace and the officer can rest knowing he did the only thing he could do.
Does anyone recognize the emblem on his shirt? 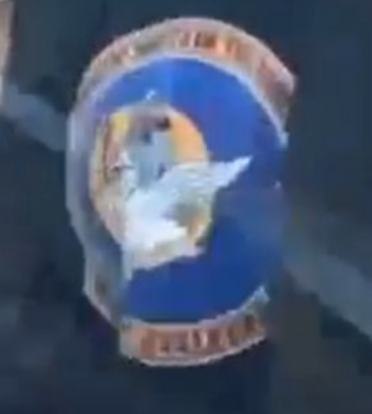 posted on Feb, 18 2021 @ 07:50 PM
link
The way he kept on coming I though for a second that he had a bullet proof vest on.
Probably just some guy who's had too much of everything and went off the deep end.
He was fixing to start in on him with that stick if he hadn't shot him when he did. Definitely justifiable what the Shurrif did!

"Thought his ass was privileged"

I wonder what color this loud mouth is ./s

posted on Feb, 18 2021 @ 08:00 PM
link
This should be a message to EVERYONE! Despite what people might say, people don't blow backwards and fall down dead after one shot...like in the movies! It doesn't work like that.

It's not even drugs either; I've seen examples of people who were shot and didn't even realize it at first. It takes a few seconds, minutes even, for the pain receptors to overcome the adrenalin in a gunfight...drugs or no drugs.

There is no pain initially, only pressure impacts. If the adrenalin is pumping, an attacker will keep coming. Yes, if you hit someone in the brain stem, or another part of the brain, they will drop immediately, but if you hit "center mass" (where you should be aiming), they're not going to go down with one shot.

posted on Feb, 18 2021 @ 08:04 PM
link
And...I should note...this is one of the problems I have with law enforcement tactics involving firearms. They don't shoot to disable you...they shoot to KILL you, and they'll keep shooting until you're DEAD.

Once you start shooting, it's not a license to continue shooting until your subject is deceased. How many times have we heard about cops firing hundreds of rounds at a suspect, emptying multiple magazines? They weren't shooting to "stop" the perpetrator, they were shooting to KILL the perpetrator.

Sorry, but it's true.

originally posted by: Flyingclaydisk
And...I should note...this is one of the problems I have with law enforcement tactics involving firearms. They don't shoot to disable you...they shoot to KILL you, and they'll keep shooting until you're DEAD.

Once you start shooting, it's not a license to continue shooting until your subject is deceased. How many times have we heard about cops firing hundreds of rounds at a suspect, emptying multiple magazines? They weren't shooting to "stop" the perpetrator, they were shooting to KILL the perpetrator.

Sorry, but it's true.

Especially when we mere citizens are expected to stop as soon as the threat is managed. If we go all out like that., we go to jail.

originally posted by: Starcrossd
Wow.. that was bizarre.. I wonder what was going on with that man.. brutal to watch.. Hopefully he is at peace and the officer can rest knowing he did the only thing he could do.
Does anyone recognize the emblem on his shirt?

I was wondering the same thing...he seemed to point at it a few times and say something, while he was first coming at the cop.

posted on Feb, 18 2021 @ 11:17 PM
link
I saw this video recently and while the guy deserved what he got. It's a shame it happened at all. The part I find offensive is the man recording it obviously acts in a racist manner but nobody will even confront or blame him for it. His behavior was disgusting and undeniably racist but I don't guess he'll be fired from his job or publicly shamed for his remarks.

This guy must've had some PCP.. a helluva amount of coke... Bath salts.. Flakka... or something wild..

Looks like that dude was on the drugs. And kind of asked for it.