The Real Agricultural Revolution and the Evidence to Support it 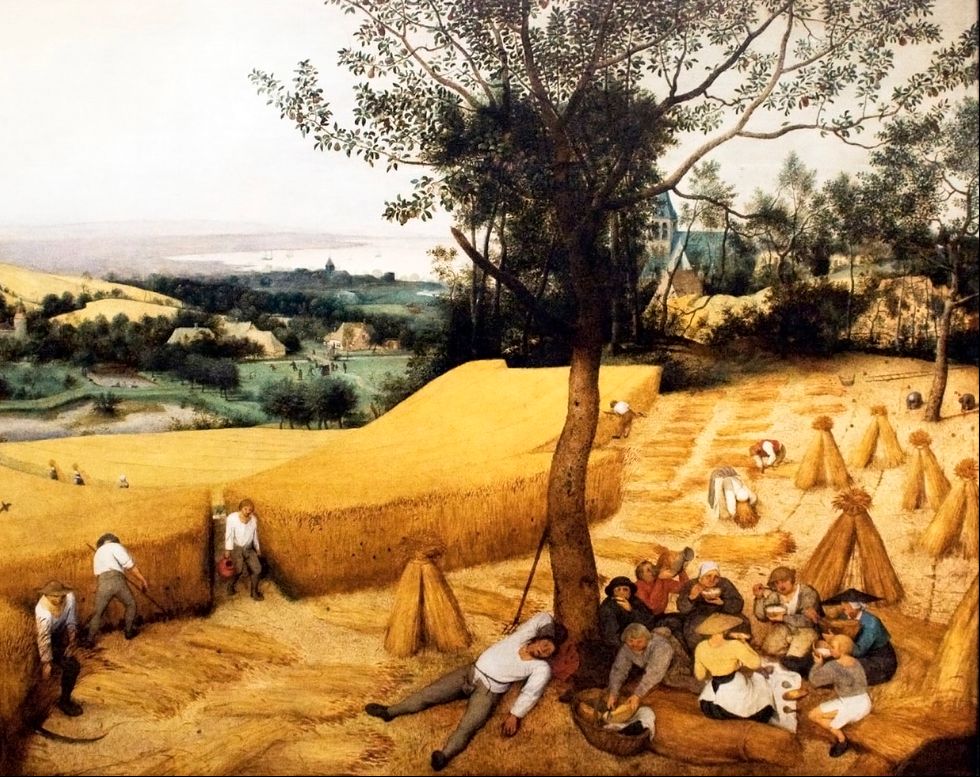 The Sumerians have a record that has been preserved through time called "the debate between sheep and grain". It talks about a time before even the invention of clothing or bread, shortly after the transcendent spiritual Force manifested the world and biological organisms. They are debating whether nomadic herding or a sedentary agricultural lifestyle is more preferable:

"Your shepherd on the high plain eyes my produce enviously"

The writing concludes that Grain (agriculture) is the preferable way to live, and therefore indicates the adoption of agricultural lifestyle.

"Dispute spoken between Sheep and Grain: Sheep is left behind and Grain comes forward -- praise be to father Enki!"

The Sumerians are one of the earliest sedentary civilizations known in history, and they record this transition and the adoption of agriculture over the nomadic lifestyle. This shouldn't be a surprise since they prided themselves in their agriculture. But from the nomad's point of view we have the same story with a different perspective. Herein comes the family feud between Cain and Abel.

Shortly after the creation by the transcendent spiritual Force in Genesis, Abel was a nomadic herdsmen and his offering was sheep, whereas Cain was an agriculturist and his offering was grain. As many of you know, Abel's offering was preferred according to Jewish history. This would be the precursor to all the major Jewish prophets being nomadic herdsmen - Seth, Abraham, Moses, and so on. Moses even put forth a code of ethics on how to live this nomadic lifestyle and keep peace among the community. Every time the Jewish people are punished for divulging into perverse behavior, they are sequestered into the ways of Cain and encaptivated by some totalitarian civilization (i.e. the line of Cain as Egypt, Babylon, etc).

The Egyptians record this same debate, and attribute it to the brothers Seth (the same as the Hebrew Seth) and Osiris (Cain). Seth is known to the Egyptians as a chaotic wanderer (nomadic herdsman), who is refusing to adopt the ways of civilization. They battle over kingship over the whole earth, or in other words, which sort of lifestyle will be the dominant way of existence. Since the Egyptians are a sedentary civilization, they prefer the way of Osiris. The Jews are the only people that I know of who insist upon the way of nomadic ways of Seth. This shows that three major cultures are describing the same historical debate between nomadicism and the development of cities which coincide with the agricultural lifestyle.

So the story of Cain and Abel takes a new light. It is expressing the agricultural revolution and the turn to a sedentary civilization. This is why Cain is known as the one who began to build cities. 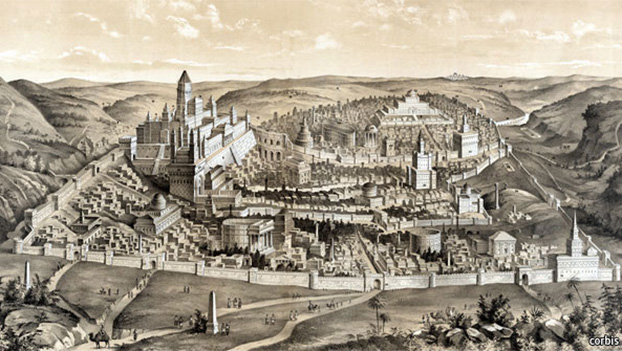 The totalitarianism begins immediately, as Cain kills the competition to his way of life. Seth is born to replace to Abel, and they are explicitly told not to fight Cain. Instead they make their own lineage, which often dies out or gets lost in history, only to eventually be drawn out of civilization again as shown by Moses, John the Baptist, Ezekiel, and so on.

Jesus in his time ridiculed the Pharisees for proclaiming the law of Moses, despite not actually replicating the lifestyle. Again, this is the same debate that happened at the beginning of time. It is likely that Jesus was an Essene, the third sect of Jews known during his time. The Essenes, unlike the Pharisees and Sadducees, were naturalists like Moses and John the Baptist. They were simple people but very intelligent and integrated with the natural environment.

A very interesting read for anyone who wants more information on the Essenes can be read here: Essene Gospel of Peace. It fills a void in scripture where Jesus is out in the wilderness with hermits and the Essene people teaching them the natural law of the land. You can decide for yourself whether it is a real account or not, but it resonated very well with me.

Another good read comes In The Hymn of the Pearl, where Thomas the apostle describes the journey out of the way of Cain into the liberated freedom of the Sovereignty of God's Kingdom.

I hope peace for all of you, and let your search for truth be abundant with joy and the love of God.

posted on Feb, 13 2021 @ 12:37 PM
link
So, the Sumarians figured grain was better than eating sheep. It worked well for them, the last writings from them were from around two thousand BC and most went extinct while some decided to wander off to other cultures. Probably died off because of eating grains that had some bad fungus on it.

I think they may have created beer in Sumaria too if I remember right, but that culture did get adopted by other civilizations. Mead was the choice of Northern Europeans, but they also liked beer too. The English chopped down all the apple trees because everyone was getting drunk a long time ago, seems Johny Appleseeds efforts turned out bad.

posted on Feb, 13 2021 @ 12:46 PM
link
Protein feeds the brain power, grain just make you bloated and gives you allergies, nope I think this whole brain vs meat is a metaphor.

The only good thing out of grain back in the days is to make mead soo people would be happier. But Jesus love wine, soo I guess wine is better than beer.

BTW itsn't Cain still alive among the living as of today as he is supposed to be immortal?

Fantastic perspective. Some stuff to consider.

It reminded me of Nimrod's attempt to congregate the people all in one place in order to build a tower to the heavens. In that story, God stepped in, confused their language, and scattered them to the four corners.

Although most believe that story is about man attempting to reach the throne of God, I always thought it was more than that.

We are not meant to crowd into cities all together as one big petri dish of miasma.

The Bible gives us no accounting of Jesus' whereabouts from age 12 to age 30. It is widely believed that he spent that time wandering far and wide.

Thanks for this thread! I didn’t know about their sheep vs. grain debate- fascinating! Thanks for the info and excellently laid out OP!


it is apparent humanity' two paths are both Not uplifting at all... we are essentially like the war obsessed Klingons portrayed in Star Trek shows

Wow, that’s a big hypothesis based on pretty much nothing but a, in my opinion, false assumption
You just assumed God rejected the grain offering, because?
edit on 13-2-2021 by Raggedyman because: (no reason given)

originally posted by: Raggedyman
a reply to: cooperton

Wow, that’s a big hypothesis based on pretty much nothing but a, in my opinion, false assumption
You just assumed God rejected the grain offering, because?


One account alone and it would be too vague. But the fact that 3 accounts describe the same story and all mention the beginning of civilization... I think it is referring to the time period where civilization began, as is said about Cain in Genesis.
God rejecting the grain offering is deeper than simply thinking, 'oh, God just doesn't like the taste of grain as much'. It shows there is a deeper point that is being made.


So the above verse would indicate that a grain offering is acceptable to God
Maybe the Cain “issue” was more about where Cains heart was, the simple fact Cain had murder and not worship already in his heart, hence why God rejected Cain’s offering

Actually no
Seems those who worship God are inconsistent
Like today, say and do everything to look like they are righteous but their hearts are astray

Isaiah 1:11
"What good to Me is your multitude of sacrifices?" says the LORD. "I am full from the burnt offerings of rams and the fat of well-fed cattle; I take no delight in the blood of bulls and lambs and goats.

its good you have your faith. Please do not expect everyone to share your zeal. Just like you can be a sane and intelligent person and have faith, i (and others) can be sane and intelligent and not have faith. The road you are going down will only get people insulting you, as you are quoting scripture to support arguments about faith. Proceed at your own metaphorical peril.

No peril, believe or don’t, it’s not an issue to me

OK. So which God? You mean the Hebrew one? Or the Christian one?

Which Hebrew one? Because God for them changed after they were enslaved in Babylonia.

OK. So which God? You mean the Hebrew one? Or the Christian one?

Which Hebrew one? Because God for them changed after they were enslaved in Babylonia.


Funny, you say I shouldn’t quote the bible yet you give an opinion based on the bible, wait what? Sorry, no you didn’t, you just said something based on...nothing

I believe the Hebrew and Christian God are the same, can’t explain cos I can’t quote the bible, evidently
As for your opinion on the Hebrew God changing after the Babylonian enslavement, please explain, no quoting the bible, don’t go all religion on me bfft

Your argument and line of questioning is inconsistent

Well you know me Raggedy man, I always have something cheeky to say. I mean that I think God is inconsistent, generally speaking. Maybe not necessarily with the grain offerings.

God sacrifices his own son.

i gave an opinion based on history, not the bible.

I think I have some more thought out replies for us to ponder, but I am at work and using mobile atm, so for now I only have short replies. Just saying, you've made some points I want to inquire about when I can.

God has been the same all throughout.

If that was the case, there wouldn't be an Old and a New Testament.