The Observable Universe in One Picture 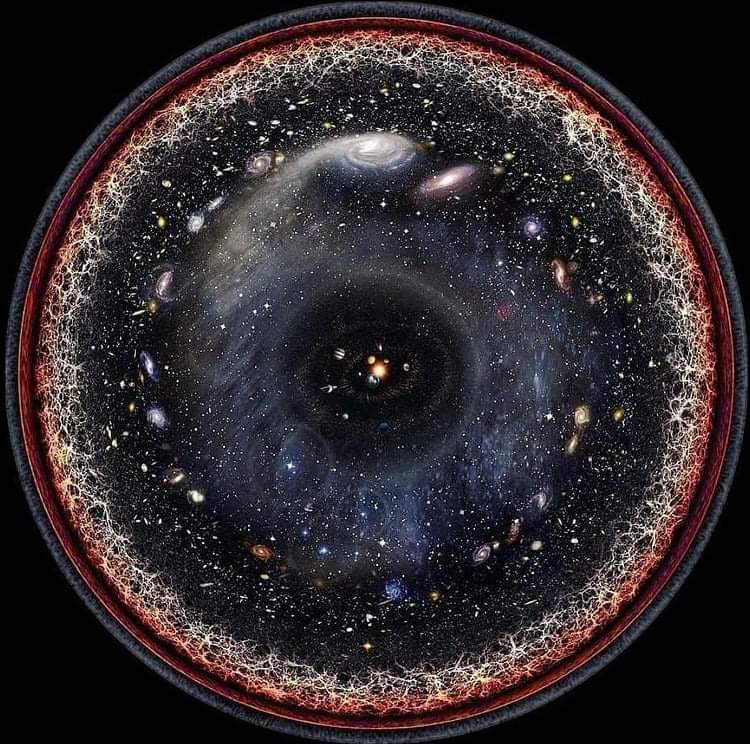 How far can you see? Everything you can see, and everything you could possibly see, right now, assuming your eyes could detect all types of radiations around you -- is the observable universe ...

... The featured image illustrates the observable universe on an increasingly compact scale, with the Earth and Sun at the center surrounded by our Solar System, nearby stars, nearby galaxies, distant galaxies, filaments of early matter, and the cosmic microwave background.

As an extra, here's one of my favourite videos: Hubble Deep Field. Somehow, Pink Floyd and space are perfect together.


Finally, just for fun, here's the educational 'The Galaxy Song' from Monty Python's 'The Meaning of Life'.

originally posted by: panoz77
Ironically, it looks like an eyeball.

Yes! Through the eye of the beholder!

originally posted by: panoz77
Ironically, it looks like an eyeball.

I was thinking it would make a pretty cool contact lens.
I want my eyes to look like that.

Excellent... You should add that as a quote in your signature!

Actually, you've given me an idea for something related.

Imagine if it was in 3D; that would really cause a major headache.

Looks like they added in Nibiru as well. (The winged thing)..

Absolutely stunning, humbling, and beautiful all at once

That'll be the coolest decoration for a birthday cake. Literally a "space cake", not like those from Amsterdam.

originally posted by: slatesteam
Yes! How cool is that! Thank you for this OP

Absolutely stunning, humbling, and beautiful all at once

The perfect words to describe it!

originally posted by: Trueman
a reply to: Encia22

That'll be the coolest decoration for a birthday cake. Literally a "space cake", not like those from Amsterdam.


I love the Dutch, but they are a little spaced out LOL. That's a grand idea for a cake; it would also make an interesting ornament for a Christmas tree.

originally posted by: NoCorruptionAllowed
Beautiful image, imagine being able to explore some of those galaxies.

Looks like they added in Nibiru as well. (The winged thing)..

Good eye! I had to examine the high resolution image to catch that.

originally posted by: FinallyAwake
a reply to: Encia22
Oh my days I hope that crazy flat earther doesn't turn up in this thread.

LOL! I thought the same thing as soon as I saw it, but avoided mentioning it for your same reasoning.

Ok... I gotta ask... Why does it appear we are in the center on the universe?

It almost looks like tree rings going outward from the center.

A few faint rings around our solar system, some sort of misty cloud going completely around us. Then a bunch of what do you call them, galaxies?

Then maybe some more smaller galaxies, and then finally, around the edge, there is some sort of white/orange briar patch "Great Barrier" (star trek's 'The Final Frontier') goin all around.

Even those RED & GRAY lines past that...

It just seems odd that those features seem equidistant from us ...

ETA: Also, just thinking about "The Great Attractor"... Where is that in this picture?

Ok... I gotta ask... Why does it appear we are in the center on the universe?

No matter where you go in the universe, you're at the center of a sphere of your observable universe, so some aliens 20 billion light years away could draw one of these from their perspective, it would be another sphere with them at the center. The sphere of course has been compressed to a circle for this image.

ETA: Also, just thinking about "The Great Attractor"... Where is that in this picture?

I think when you compress something as big as the observable universe down to this scale, you're bound to lose some detail and I wouldn't be surprised if it's either hard to see on this scale or maybe not really shown. Wikipedia refers to it as "Artist's logarithmic scale conception of the observable universe" and it may give us a general idea but I don't expect something referred to that way to have rigorous scientific accuracy.

I think there's an IMAX version of that. I would love to see it in an IMAX theater.
a reply to: akiros
The artist put the solar system at the center of the universe, an artistic choice.
I like the geocentric take in the Cosmic Voyage video. We are Earthlings after all, not "sunlings".

edit on 202128 by Arbitrageur because: clarification