no, not Antifa, show me any evidence that any "democrats and celebrities" bailed out SPECIFICALLY Antifa

Butterfinger
+10 more
posted on Jan, 20 2021 @ 04:10 PM
link
a reply to: Darth_Prime
You missed the part where Kamala asked for donations to bail them out during the summer.

originally posted by: Darth_Prime
why would anyone be surprised? only fools and pathetic people who follow biased websites, youtube, and Twitter accounts would believe that Antifa had anything to do with the Democrats

Exactly. People here can’t fathom that the left side of the spectrum isn’t a monolith. A lot of people on the left never liked Obama and don’t like Biden either.

Of course that never stopped right wing media from holding up Anti-Fascists as a scary boogeyman to get reality challenged right wingers whipped up into a hate frenzy.

show me where she specifically asked to bail out Antifa

Kamala Harris @KamalaHarris If you’re able to, chip in now to the @MNFreedomFund to help post bail for those protesting on the ground in Minnesota.

originally posted by: Darth_Prime
a reply to: LSU2018


Nah dude, it's not false at all. It's been documented. Kamala Harris had "charity drives" to bail these people out.

No, it is false, show me any evidence where Democrats or Celebrities specifically funded anything Antifa

Yeah that's right. Attack the source without your own source, because you know everything.

using memes with edited quotes shows your level of ignorance

I even gave you a link. Harris could have chosen not to include bail for Antifa.
But she did not.

For another clear example, the Democrat mayor of Seattle let Antifa act out for WEEKS, despite "CHAZ" zone, murders, burned-out police station, at the same time refusing the very same National Guard you saw quell a smaller riot in D.C. that lasted a few hours ( which was the correct thing to do, BTW - NO political side , NO ONE can be allowed to use violence)

originally posted by: Darth_Prime
a reply to: LSU2018

No, it is false, show me any evidence where Democrats or Celebrities specifically funded anything Antifa

You got a source, you ignored it because you didn't like it.

Butterfinger
+4 more
posted on Jan, 20 2021 @ 04:20 PM
link
The twitter doesnt say specifically Antifa of course, why attach yourself so blatantly? This was before she was picked for the VP.

If you cant see Antifa was everywhere in these riots youre being purposely obtuse or brainwashed.

No, I read it, show me where she donated to specifically Antifa

"Make no mistake, we will not let these vigilantes and extremists derail the path to justice," - Kamala Harris.

The money didnt exclusively go to Antifa, it went to all roiters, which included Antifa.

This is the part of the thread where you claim Antifa wasnt there.

By going against their ONLY backers, the ultra fascist terrorist organisation aNtifa has just lost ONE HUNDRED PERCENT of its funding

Why that is so upsetting to the leftists on ATS, I don’t know

ok, here is a horrible source, but since that doesn't matter you agree with it?

Antifa is affiliated with the Democratic Party.

In August, a fake antifa website began to redirect users to Joe Biden’s campaign site. Though it was clearly a ploy to associate the Democratic Party with antifa, right wingers seized upon the apparent conspiracy. Speaking about the Democrats that same day, Trump claimed that “in my book, it’s virtually part of their campaign, antifa.” According to Ann Coulter, the Democrats are “the Antifa Party.” And columnists have argued that “antifa riots may be part of [a] Democrat power grab” or even that “antifa is the militant wing of the Democratic Party.”

Not only is there no evidence to support such allegations — which are more of an effort to associate liberalism with lawlessness than anything else — but Democratic leaders have routinely condemned antifa and political violence more broadly. For example, in 2017 Nancy Pelosi denounced “the violent actions of people calling themselves antifa” after destructive protests against right-wing commentator Milo Yiannopoulos in Berkeley. When a reporter recently asked Joe Biden, “Do you condemn antifa?,” he responded, “Yes, I do.”

Nor is there any antifa love affair with the Democrats. The vast majority of antifa militants are radical anti-capitalists who oppose the Democratic Party. Some may hold their noses and vote for Biden in November, but many are anarchists who don’t vote at all.

If you had bothered to READ the link I gave you, you would have found THIS.
Kamala, could have chosen to bail out just BLM or just POC.

KAMALA CHOSE TO INCLUDE BAIL FOR ANTIFA 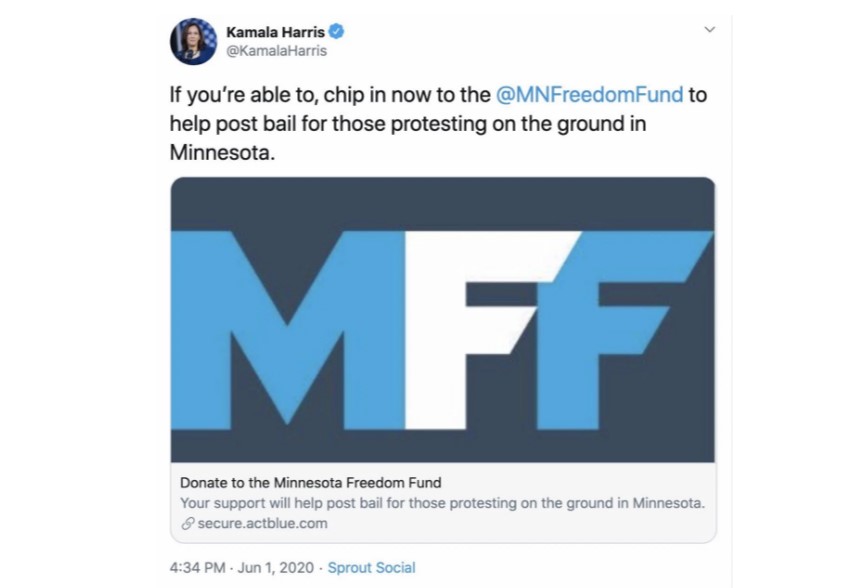 Time for QANTIFMABLAG to take over.