The Theme of the Presidential Inauguration is Unite America

1. Unite America means to put America back to the plan of the " reset " agenda. ( I'd like to say, I really don't have an idea what it is other then the 3 major powers are: Russia, China and India
Why did I leave out America, because that is what I'm talking about... Unite America with being little China's brother and or sister, depends who is in charge of the Oval Office.

2. Unite America means that it is only one party of those in power, doubt my word, wait till May of this year, Americans will be encourage by all means to join the united party of China and little brother/sister America. All the stepping stone for China and what was once called The United States will see that not being a patriot to the reset of the 3 major powers as stated above will not be in the spider web trap of China and therefore be classified as an undesirable to China/little brother/little sister party.

Those in congress with intelligence need to get off their seat and work with the US military to strengthen the patriotisms' loyality to only America.

Trump was begging people with the message of " America first ". I don't think he really meant to explain it in words what he really meant by his saying. All countries that have a leadership for the people will say that about their country for its citizens. I know this to be true, Prime Minister Suga of Japan is pro Japanese and for its well being for its citizens and he is still getting a hard time for it.

bottom line may just be this... military rule to save the Republic of America

posted on Jan, 20 2021 @ 06:25 AM
link
a reply to: musicismagic
The DNC defines "Unite" as Subjugate.
I think it was Huey Long who said something along the lines of "If there is ever a fascist party in America, it will under the guise of anti-fascism."

I will be boycotting the inauguration... 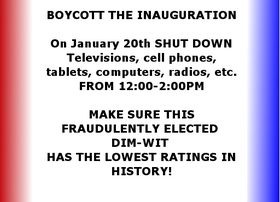 originally posted by: Klassified
a reply to: musicismagic
The DNC defines "Unite" as Subjugate.
I think it was Huey Long who said something along the lines of "If there is ever a fascist party in America, it will under the guise of anti-fascism."

I will be boycotting the inauguration...

I just change a few words in my thread, re-read it if you like.

I think that the theme for 2021 should be, "Learn From Our Mistakes - Unplug".

The internet has become a huge black hole of pure idiocracy. There are so many people vomiting and regurgitating anything and everything all over the internet that it trivializes everything.

Trying to find truthful, factual, honest, information, on the internet is like panning for gold in your bathtub.

Everybody has something they want to say. Be it comedic, serious, or concerning. When huge volumes of people are being bombarded with lies, deception, propaganda, with or without a sinister motive, it becomes a problem that is not easy to rectify. It also very dangerous.

Not just because it could cause people to respond inappropriately to a constructed deception, but because it will have exactly the opposite effect.

If we want to keep free speech free, we need to have to place more value in facts and truth. Sure you are free to think you are Superman and jump off a roof, because you feel it is your right, and you think you can fly, but actually doing it may not be wise.

Sometimes the best and wisest thing we can do, is to just listen.

originally posted by: musicismagic
Sometimes the best and wisest thing we can do, is to just listen.

There are many but the left are having them silenced and removed from platforms where they can share that wisdom.....

Flat out if it doesn't follow their narrative, they want it stamped out....

No one can deny this is happening, if they do they either know they are flat out lying, or they're so brainwashed they are beyond reach

Hell Joe Rogan just had. A podcast talking about it
edit on 1/20/2021 by ManBehindTheMask because: (no reason given)

posted on Jan, 20 2021 @ 07:06 AM
link
Donald Trump was the last president of the United States. We now have a commie/lite dictatorship being installed, and today is a funeral.

I have no interest in unity.

posted on Jan, 20 2021 @ 07:14 AM
link
The Democrats vision of "UNITE" means to bend the knee to them utterly and completely or face punishment.

They now have a movement beginning #StopTrumpsArmy which is about finding out which of your friends and neighbors voted the wrong way and then informing on them ... because, you know, unity and stuff.

That means even if all you do is dissent, you could have some angry-@ss leftist all up in your business trying to cancel you for it.

pee pads and teleprompters everywhere a long with random people to grope and sniff.

posted on Jan, 20 2021 @ 07:25 AM
link
I hope there is impeachment on day 1, and investigations into every single thing Biden and Kamala does. And God forbid if there's any SC openings stall for years.

Unite my ass!
More Orwellian doublespeak from the fascists. This is going to be so much fun calling out the actual fascists for 4 years.

posted on Jan, 20 2021 @ 07:40 AM
link
Unite? The Blue Party way? With the lipstick wiped off that pig, it's just intimidation, pressuring, coercion, threats, abuse, belittling, reverse racism PLUS P/A Uncle Tom insult slinging AND taking everyone else's earned # for one's self.


That's not a good "look" for "unity" there. I'll skip and be contrary and ornery. It'll vex someone big-time, so I'm good for now.

originally posted by: musicismagic
Sometimes the best and wisest thing we can do, is to just listen.

I’m not interested in the message. Last week the Biden’s followers were ready to punish conservatives. Hell, next week Trump supporters will be burned at the stake. No thanks. In the last four years we observed the left doing everything they could to oppose the President. Now is the time to put that knowledge to use.

posted on Jan, 20 2021 @ 08:15 AM
link
Of course, it's interesting that they suddenly want to "unite" what they have spent all this time splitting apart through "diversifying" it.

posted on Jan, 20 2021 @ 08:23 AM
link
Lets see if Biden demands in his speech today that Twitter-FaceBook reactivate conservative accounts.

A small but important gesture that puts his mouth where his "Unity" theme is.

In unite does that mean close the gates and double the sentries?
edit on 20-1-2021 by CharlesT because: (no reason given)

posted on Jan, 20 2021 @ 08:43 AM
link
You better unite you dog faced pony soldier deplorable right wing terrorists cause we're coming for you if you don't....

The party of tolerance and acceptance has spoken.

They're great at tolerating everything except what they hate.


Gonna be kinda hard when the media runs headlines like the Drudge Report:

What freaking war in the Capital? Did I miss something or did the Capital magically become Somalia?