The Acting AG has said so 😎

This now contradicts what some Fed Prosecutors actually alleged in some court filings !! 🤣

This old trick of spreading a wild lie and later "correcting" after the damage is done gets old but stays very very effective.

and, Mr "Qanon shaman" is somehow involved with the lie !!

The acting U.S. Attorney for the District of Columbia Michael Sherwin announced on Friday that there is no "direct evidence" indicating that the crowd of people who breached the Capitol on Jan. 6 had any intention of killing or kidnapping members of Congress.

He told reporters, "We don't have any direct evidence of kill-capture teams," which seemed to contradict federal prosecutors in Arizona who had alleged on Thursday in a court filing that there was evidence rioters wanted "to capture and assassinate elected officials."

Reuters reported that Sherwin was attempting to "walk back" the claims filed in Arizona, which were about Jacob Chansey, the so-called "Qanon shaman" who was shirtless and wearing horns in the Senate chamber. He allegedly left a note saying, "it's only a matter of time, justice is coming."

Sherwin said that his office in D.C. is taking the lead on prosecuting crimes related to the breach of the Capitol, adding that there may have been a "disconnect" with other offices on some of the evidence. 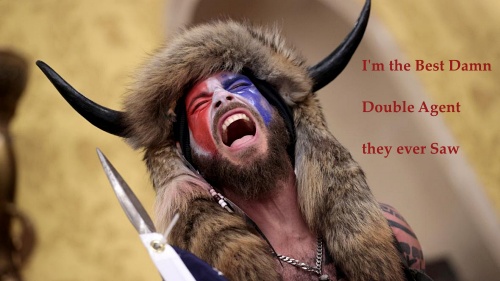 just my guess but some of them or maybe even just that one guy thinking they were going to make citizen arrests, considering why they were there, thinking the election results were rigged.

like they said, there was no evidence of an attempt at kidnapping or killing anyone, just a single picture of one person with plastic tie handcuffs and some paranoid sensationalism comparing them to ISIL in an attempt to invoke imagry of their atrocities and implying terrorism, even though it was just idiots rioting and nothing more sinister.

posted on Jan, 16 2021 @ 08:59 PM
link
MSM will be along soon surely to make the correction and apologize to the American public and world at large...

Zip tie guy and his mom have both been charged/in custody.

The mother-son duo appear to join the chase, and are both seen holding flex cuffs in their hands while in pursuit. Both officers ultimately escaped to a lower level of the building, and Eisenhart then appears to shout at the officers while leaning over a banister.

Munchel and Eisenhart then appear to enter the Senate chamber through the same area that the officers were guarding.

posted on Jan, 16 2021 @ 10:56 PM
link
He could have impaled someone with the horns. They could be considered weapons if they were sharpened. One of the females arested probably had a nail file so she was an accomplice.

originally posted by: rickymouse
He could have impaled someone with the horns. They could be considered weapons if they were sharpened. One of the females arested probably had a nail file so she was an accomplice.


The only thing they won't be walking back is the insistence Biden won fair and square. They are petrified their own people will see through this blatant fraud.

The only thing they won't be walking back is the insistence Biden won fair and square. They are petrified their own people will see through this blatant fraud.

Yeah, they probably won’t walk back the claim that it was all Trump’s fault either. You know; that he incited a deadly riot. Apparently, it was all coincidental but definitely planned by Trump 🙄

Dude is carrying an iron-tipped spear, Greece conquered Asia Minor with those things yet he gets to walk freely around inside the capitol openly displaying a deadly weapon THAT NOBODY MENTIONS?

posted on Jan, 17 2021 @ 05:56 AM
link
a reply to: rickymouse
Yes and having a nail file is preparation for the resulting jailbreak later. We all know the bad things the Beagle Boy's had on mind robbing Dagobert Duck. They also wanted nail files a lot, so guilt by association.

- inciting unrest
- sedition
- insurrection
- the wish for clean nails
- planned jailbreak
- probably would hurt someone during the jailbreak so manslaughter, too.

They're an excellent pair of acting geniuses 😁

Leave X alone, he's on the jelly beans again...he'll only say the ties were for fixing a loose pipe, and in any case, The spat is between Arizona Feds and AG Johnny-cum-lately!

To add,
So, just a pyjama party eh!
Cleveland Grover Meredith Jr is the guy with all the MC's, ammo and a rifle stashed. He's the guy who said he'd put a bullet in Nancy's noggin, or run her over.

Dude is carrying an iron-tipped spear, Greece conquered Asia Minor with those things yet he gets to walk freely around inside the capitol openly displaying a deadly weapon THAT NOBODY MENTIONS?

In all the chaos going on there, having that spear was really dangerous, swing it around and people could get hurt, even people you are protesting with. That guy is an attention seeker, and attention seekers can very often get people hurt or in trouble. He is wearing a costume that symbolizes radical. Or he is just BULL headed naturally and is proud of being able to STEER people into trouble. No matter what, his BULL headed tactics are not really appropriate in that situation.