The internet, and Critical thinking

posted on Jan, 15 2021 @ 07:01 PM
link
I remember years ago, we had the Daily news, National Enquirer, the star etc sold all over the country.
Often they would have sensational headlines about celebrities' UFOs, sometimes conspiracies, BAT BOY, etc. We would laugh and scoff at these stories but would NEVER entertain them as serious news.
Now, here we are several decades later, and you have the INTERNET, which is rife with the same kind of sketchy news fare that we saw in those old mags. Except now, a scary amount of people BELIEVE what they are reading and don't even question it, or its source. So stories circulate round and round the net, and many times mutate and become convoluted more and more and embellished with time. So after a while you don't even know what the original story was or where it originated.
Some of the net conspiracies are mostly harmless. And some are not. You can have huge populations of people now totally believing something that is absolutely fictitious, but is presented as truth. We have seen the damage it can do.
We need to stop accepting what we read or watch on the internet at face value. We need to start testing the validity of assertions made. We need to start DEMANDING concrete sources and proof. Carl Sagan said of science once, that "Extraordinary claims require extraordinary evidence". Well this is at least as true of the political and social sciences.
In short, employ a little healthy skepticism in everything you read and watch. That's it. Good luck to us all and lets hope this is a better year than the last one.

I was just thinking the same thing earlier today.

What happened to the forum where the members were known to doubt everything? The forum with the motto deny ignorance, the odd forum where most members didn't believe anything on the internet without combing through it with a magnifying glass and a fine tooth comb, rejecting anything that was possible deception, or fit for the hoax bin?

We have become those mentally conditioned and mind controlled creatures that were once just conspiracy theories, and we were laughed at for warning about. 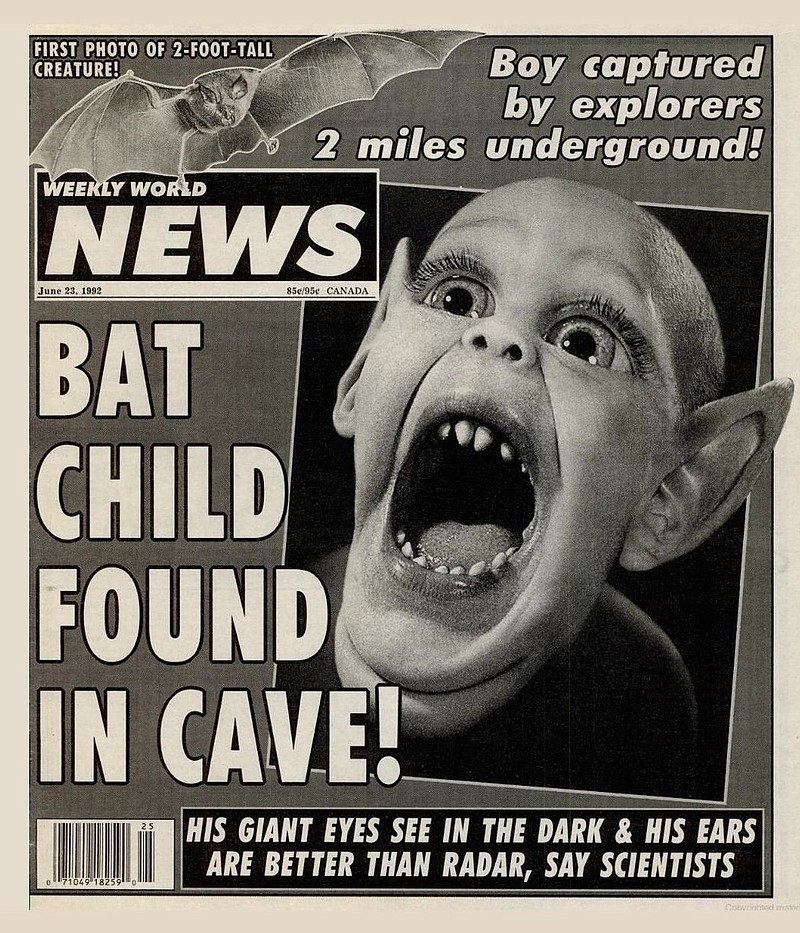 I remember years ago, we had the Daily news, National Enquirer, the star etc sold all over the country.

There's some very relevant (and very interesting) background research on those publications explored below by journalist Terry Hansen.


In the 50s and 60s there was some mainstream press about the subject, and then it quickly fell away and the story was left to be covered by rags like the National Inquirer. The mere fact something appears in the National Inquirer is taken as being fake by most people. This book goes into the background of the government's connections with the press.


“By clever and persevering use of propaganda even heaven can be represented as hell to the people, and conversely the most wretched life as paradise.”—ADOLF HITLER, MEIN KAMPF.

AS MEANS of communicating have expanded—from printing to the telephone, radio, television, and the Internet—the flow of persuasive messages has dramatically accelerated. This communications revolution has led to information overload, as people are inundated by countless messages from every quarter. Many respond to this pressure by absorbing messages more quickly and accepting them without questioning or analyzing them.

The cunning propagandist loves such shortcuts—especially those that short-circuit rational thought. Propaganda encourages this by agitating the emotions, by exploiting insecurities, by capitalizing on the ambiguity of language, and by bending rules of logic. As history bears out, such tactics can prove all too effective.

A History of Propaganda

Certainly, the handiest trick of the propagandist is the use of outright lies. Consider, for example, the lies that Martin Luther wrote in 1543 about the Jews in Europe: “They have poisoned wells, made assassinations, kidnaped children . . . They are venomous, bitter, vindictive, tricky serpents, assassins, and children of the devil who sting and work harm.” His exhortation to so-called Christians? “Set fire to their synagogues or schools . . . Their houses [should] also be razed and destroyed.”

A professor of government and social studies who has studied that era says: “Antisemitism has fundamentally nothing to do with the actions of Jews, and therefore fundamentally nothing to do with an antisemite’s knowledge of the real nature of Jews.” He also notes: “The Jews stood for everything that was awry, so that the reflexive reaction to a natural or social ill was to look to its supposed Jewish sources.”

Another very successful tactic of propaganda is generalization. Generalizations tend to obscure important facts about the real issues in question, and they are frequently used to demean entire groups of people. ...

Some people insult those who disagree with them by questioning character or motives instead of focusing on the facts. Name-calling slaps a negative, easy-to-remember label onto a person, a group, or an idea. The name-caller hopes that the label will stick. If people reject the person or the idea on the basis of the negative label instead of weighing the evidence for themselves, the name-caller’s strategy has worked.

Playing on the Emotions

Even though feelings might be irrelevant when it comes to factual claims or the logic of an argument, they play a crucial role in persuasion. Emotional appeals are fabricated by practiced publicists, who play on feelings as skillfully as a virtuoso plays the piano.

For example, fear is an emotion that can becloud judgment. And, as in the case of envy, fear can be played upon. ...

Hatred is a strong emotion exploited by propagandists. Loaded language is particularly effective in triggering it. There seems to be a nearly endless supply of nasty words that promote and exploit hatred toward particular racial, ethnic, or religious groups.

Some propagandists play on pride. Often we can spot appeals to pride by looking for such key phrases as: “Any intelligent person knows that . . .” or, “A person with your education can’t help but see that . . .” A reverse appeal to pride plays on our fear of seeming stupid. Professionals in persuasion are well aware of that. [whereislogic: these ones are used extensively on the origins&creationism subforum by those arguing in favor of evolutionary philosophies including the one referred to as "the chemical evolution theory of life" on the wikipedia page for "abiogenesis"]

Slogans are vague statements that are typically used to express positions or goals. Because of their vagueness, they are easy to agree with.

For example, in times of national crisis or conflict, demagogues may use such slogans as “My country, right or wrong,” “Fatherland, Religion, Family,” or “Freedom or Death.” But do most people carefully analyze the real issues involved in the crisis or conflict? Or do they just accept what they are told?

In writing about World War I, Winston Churchill observed: “Only a signal is needed to transform these multitudes of peaceful peasants and workmen into the mighty hosts which will tear each other to pieces.” He further observed that when told what to do, most people responded unthinkingly.

The propagandist also has a very wide range of symbols and signs with which to convey his message—a 21-gun salvo, a military salute, a flag. Love of parents can also be exploited. Thus, such symbolisms as the fatherland, the mother country, or the mother church are valuable tools in the hands of the shrewd persuader.

So the sly art of propaganda can paralyze thought, prevent clear thinking and discernment, and condition individuals to act en masse. How can you protect yourself?


The next page with an answer and useful tips regarding that last question is linked in my signature.

Good post, I've said this a lot recently, critical thinking has gone right out the window.

I've been into CT topics since i was in late Primary (Grade) School and it wasn't until I was a good bit older I started applying critical thinking, probably around the time of 9/11 and all the different theories whirling round about that, I found how easily one can lose ones head to them.

I think the most damaging, at the moment, is the lack of critical thinking when it comes to Covid-19 v TPTB taking our freedom.

originally posted by: NightSkyeB4Dawn
What happened to the forum where the members were known to doubt everything?


They got removed because they knew certain things that TPTB didn't want to be made public or questioned.

posted on Jan, 26 2021 @ 11:33 AM
link
This topic reminds me of the film "The Social Dilemma". In short, the various online algorithms that track your interests feed people content that will keep the viewer engaged, and that usually means shocking content that reinforces the viewers beliefs. Most people are so distracted these days that they can't mentally manage doing deep research and develop their own opinions based on critical thinking. They just go from headline to headline blindly choosing what to believe.

Its a strange concept that in the "information age" we are going through a dark age where people are devolving.