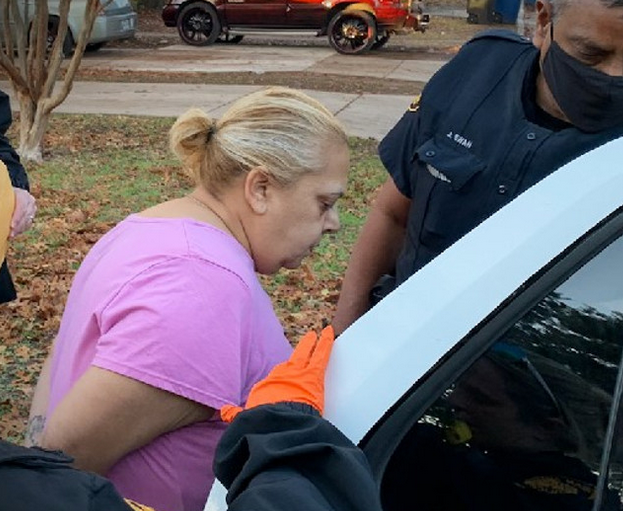 AUSTIN - A woman has been arrested for multiple charges including election fraud, illegal voting, unlawfully assisting people voting by mail, and unlawfully possessing an official ballot.

Each charge constitutes a felony under the Texas Election Code.

Texas Attorney General Ken Paxton announced Wednesday that Rachel Rodriguez has been taken into custody stemming from an investigation after a Project Veritas video surfaced last fall showing her taking part in vote harvesting leading up to the 2020 election.

Don't mess around in Texas.

posted on Jan, 13 2021 @ 04:53 PM
link
I'm pretty sure she wasn't the only one in the country that did this. But, it's Texas. She got caught. Had she done it in Detroit or around Atlanta or Philadelphia, or a few other places, nothing would have been said much less done about it.

She only got caught because of Project Veritas....You know, that 'extreme right wing propaganda hit organization' the left keeps trying to discredit and shut down.

Yup, and you don’t need to see the ballots either, we counted them you can trust us.

At this point I trust no democrats.

Good start, dont care who she harvested for every one we can prove needs to go down.

Also I enjoy the fact it was veritas that got the ball rolling.

originally posted by: Nivhk
From,


Meh, only a fool believes there is zero fraud, there is always some..I doubt anyone here said that there was 0 instances of fraud.
As for her..good!

Was watching Abbott the other day responding to a question about booming business and keeping Blue politics out as a result of the mass exodus occurring from Blue states.
Abbott claims that numbers side overwhelmingly with Red state metrics as those polled who moved to TX didn't vote Democrat in their first election.
In otherwords, seems like a lot of those people who came over weren't hardcore Democrats, rather, independents and Moderates.

Texas may be Red, but it's more like Centrist Red, pretty close to the center.

Abbott is cracking down on fraud and making examples of them.

posted on Jan, 13 2021 @ 05:31 PM
link
I’m very curious to know the origins of Veritas and this woman setting up the interview/story. Did they tell her they weren’t recording anything and she would remain anonymous, then give her some diluted contract to sign that was completely the opposite of that?

Why the f*ck would she tell ANYONE this stuff, even anonymously, for $500?

The one thing I thought was odd though (aside from a woman divulging multiple felonies for $500) was the time frame they were trying to convey in the video; at one point she says “I have to get these ballots to the post office”, but when they’re in the diner, the guy goes “I guess Trump was right.”, in regards to election fraud. So when was this footage filmed, before the election or after the election? She also said she was visiting several women the following day, I think she said 8, so that would indicate it was pre-election.

She also called that woman “Mom”. Not “Mommy” or “Mama” as is popular in Hispanic cultures, but straight up “Mom”. It seemed more to me like she was demonstrating how she would carry the act out, using her mother.

I dunno, some parts of this are a bit odd to me....it’s also Veritas.

My knee-jerk reaction is that this was set up and this woman is getting paid to take a fall, like once it goes to court they show that it was all staged and the case is dismissed, charges dropped, then she gets a big hunk of cash for going along with it. If this is some stupid attempt to get the left to admit there was election fraud, or buy into the idea of there being election fraud, it was f*cking stupid.

originally posted by: carsforkids
a reply to: loam


FFS....this is the most brainwashed, disturbing sh*t I’ve ever seen on this site.

posted on Jan, 13 2021 @ 05:38 PM
link
a reply to: Bicent
Funny how the only ballots I've seen, besides my own, was in a Illhan Omar administration worker car filled with ballots he was on recording to have stolen and was taking them back to fill out.

originally posted by: loam
a reply to: Drucifer

Ah, right on, I think I was just shocked by how openly she admitted to doing all this. That’s f*cking nuts.

And I didn’t even consider the one-party consent aspect, thanks!

Edit- I’m still not 100% sold. We’ll see what happens when this goes to court. I just can’t believe someone would be that f*cking stupid. I don’t doubt the fraud aspects of it, I just don’t see someone incriminating themself for $500. She’s intelligent enough to know the laws, she’s quick with her words and confident with them, she doesn’t come off as a run of the mill dumbass. It’s just really odd to me.
edit on 13-1-2021 by Drucifer because: (no reason given)

originally posted by: queenofswords
I'm pretty sure she wasn't the only one in the country that did this. But, it's Texas. She got caught. Had she done it in Detroit or around Atlanta or Philadelphia, or a few other places, nothing would have been said much less done about it.

Nothing done? Pfft, she would have received a bonus. They pumped more money in to these fiasco than any other election in history. All for little "favors" like this.

posted on Jan, 13 2021 @ 05:42 PM
link
The left gonna sacrifice a few pawns to try and appease the masses. I don't think it's gonna work this time, that's just me. Hopefully the pawns start waking up, but it's doubtful.

Hurting is the last thing I’m doing right now, wrong or not. I’m actually quite content and comfortable, after quite some time of not being so.

This mixing of God and Trump is just too over the top for me. I’ve heard of people doing this and have seen it in various media, but I didn’t think we had one of you on this board. Damn.

posted on Jan, 13 2021 @ 05:44 PM
link
Another thought, keep an eye on if some players on the left step up and help with her defense lawyer, or if she is able to use crowdfunding against their TOS. Should be interesting.