Koh-i-Nur The Mountain Of Light 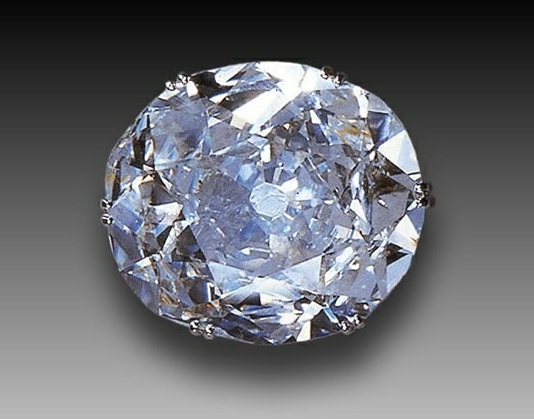 "Born" probably in Andhra Pradesh, though some say he was stolen from Krishna, he once was 793 carat(!around 159g!) well worthy of his name Koh-i-Nur Mountain of Light.
It could be the legendary ancient Syamantaka Jewel about which Krishna said:
"...everyone of us will derive benefit from the jewel. Because of the jewel's presence in the city of Dvārakā, there will be no more famine or disturbances created by pestilence or excessive cold or heat."
Jāmbavān

The legendary Ala-ud-deen (that's right the Aladdin) had it in his possession when he lost the battle against Barbur of the Mughal Empire in Malwah 1304.
That's where Koh-i-Nur entered recorded history.

In 1739, when the Persians invaded and conquered India, the Indian Emperor, Muhammed Shah, hid the Koh-I-Noor in his turban.
Alas, the Persian leader, Nadir Shah had been tipped off about the secreted gem by a member of Muhammed's harem, and before returning back to Persia, Nadir invited Muhammed to join in with their celebrations, part of which included a well-known Oriental tradition whereby Shah and Muhammed would exchange turbans to symbolize their new found friendship and lay down peace between the two nations.
The Mogul leader was unable to refuse the gesture and this became famously known as the 'turban trick'. When Nadir later unraveled the turban and first laid his eyes on the large brilliant stone he was believed to have proclaimed 'Koh-I-Noor!', which translates as 'Mountain of Light'.

Then he went through many hands, stolen, or won through battle, until he ended up in the possession of Queen Victoria, only a shadow of his former glory, but still impressive 105 carat (21g).
After his long turbulent life he gained the reputation of being cursed, that who holds him has the right to rule the world, but also that horrific extinction is sure to follow.

So it's kind of smart the British royal family so far made sure that he is owned only by women...

Is it worth the risk?
What if people like me start spreading rumors it's the Brits' fault there's hunger 'inconvenient' weather ie climate change and such?


So it's kind of smart the British royal family so far made sure that he is owned only by women...


100% agree with giving it back, particularly given that it was taken as a spoil of war by what was essentially a mercenary, one of many who looted India because of a sense of English exceptionalism.


If it was in Dwarka which is not definite then it was probably stolen before that, the Hindu's too went to war, looted and fought one another, India was once the most wealthy nation on earth and even the Taj Mahal which some Hindu's make a very intriguing claim is actually a Temple to Shiva that was merely repurposed by the Islamic ruler - as indeed do others about Mecca being another Hindu site (the REAL mecca was actually Petra of the Nabateans as evidences by the earliest Muslim Mosques being oriented not toward Saudi Arabia but directly toward Petra) - was once covered in Gemstones and not the white plain edifice we see to today but once so encrusted in precious and semi precious gem's and gold that it glittered in the sun.

All that trouble over a bit of carbon?.

Also how do we know it is even real, they have covered up theft's in the past?.

That diamond ring you may have on right now could potentially have a chip of the Koh-I-Noor in it?.

Anyway being that it is only a fraction of it's original size is it really still the Koh-I-Noor after all that cutting?.


So it's kind of smart the British royal family so far made sure that he is owned only by women...

100% agree with giving it back, particularly given that it was taken as a spoil of war by what was essentially a mercenary, one of many who looted India because of a sense of English exceptionalism.

We know what you mean but I still winced at the thought of passing that sharp edged object, it would be like crapping a pack of razor blades especially for anyone already suffering piles.

Sorry I didn't do it on purpose. It's natural to me as woman diamonds-men that's a connection deeply engraved.

originally posted by: Peeple
So it's kind of smart the British royal family so far made sure that he is owned only by women...


How do you make that out? The present Queen (God bless you, ma'am) is a woman and so was Queen Victoria, but there was a fifty-year interval of male kings between them.

Since arriving in the UK, it has only been worn by female members of the family.[10] Victoria wore the stone in a brooch and a circlet. After she died in 1901, it was set in the Crown of Queen Alexandra, wife of Edward VII. It was transferred to the Crown of Queen Mary in 1911, and finally to the Crown of Queen Elizabeth (later known as the Queen Mother) in 1937 for her coronation as Queen consort.

You can hire some bots to push the narrative on social media. LOL

In all seriousness, and back on actual topic, that is a stunning gem. The saddest thing about it all is that they have cut it to reduce its size as years went by. I wonder what is actually looked like at first? Was it originally only somewhat finished, but not with the facets we know modern finished diamonds by? Was its size reduced the create a better gem?

Interesting story, thanks for sharing it.