Freedom of Speech, just watch what you say!

posted on Jan, 10 2021 @ 06:15 PM
link
When I was a teen, there was a song by Ice-T called “Freedom by of speech”. In this song he takes umbrage with the PMRC, a group of “Washington Wives” who got together to take aim at pop culture as it related to parents controlling access to what their kids listened to. The PMRC lasted about a decade...

Although the songs they had issues with were normally of a sexual, violent or occult nature, none of the categories were listed as “sedition”

Recently the owner of Parler gave an interview in which he alleges that his first amendment rights are being infringed.

The problem with this is that the first amendment only covers what the government can do, not what business can do. An owner of any bar can throw you out for causing problems.

So why does this guy, who is most assuredly an educated person, keep claiming his first amendment rights are being infringed?

Apple demanded that Parler begin moderating. They were given an option in which this bar tender would let them stay in the bar. The owners of Parler are opposed to moderating, and as such are being asked to leave. Yet this guy keeps going on about his first amendment rights?

Does he not want to play by the social norms of society? Ultimately this isn’t just an attack on government, this is an all out assault on society.

Parler is using the ruse of allowing the people who believe the lies Trump and his surrogates have said, not to actually help them in their cause, but to completely undermine anyone in society from stopping the kind of discourse that ruins the atmosphere of the bar.

If I can refuse to bake a cake in my bakery for a gay couple, then what’s wrong with Twitter, Apple and Amazon refusing to host seditious speech?

This reminds me of another song from my youth, by Red Rider.... Lunatic Fringe...

Your post quota for the month has been filled on ATS and your social credit score will soon reflect it.

Your post quota for the month has been filled on ATS and your social credit score will soon reflect it. 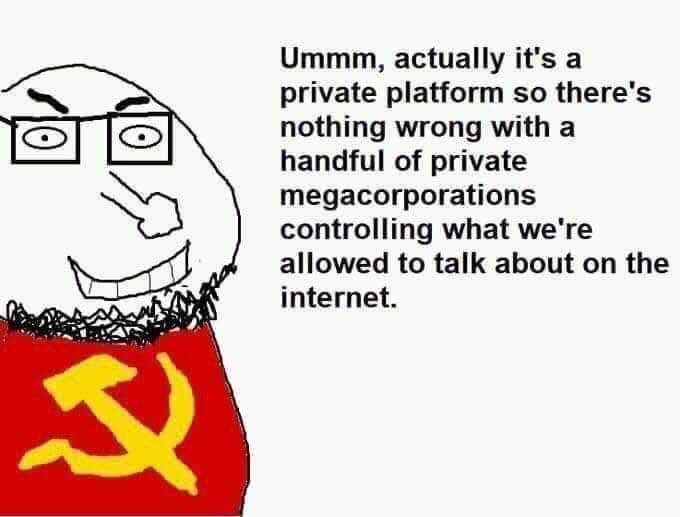 I remember when Alex Jones first got banned and removed. He said " I am the canary in the coal mine." Well I dont know how to complete the saying but.. I tseems a lot of people are now getting removed and banned.

I think we let gradualism and acceptance take part.

Oh its just Alex Jones that crazy conspiracy guy, it can;t happen to any one prominent can it??

So I'll watch what I say.

Social media platforms are acting in the interest for a political ideology soon to take power in America. They are doing the proxy work for the Biden administration.

It most certainly is against the 1st Amendment for government or an agent of the same ideological bent to infringe upon the rights of free speech.

All other social media platforms aren't.

Social media companies, after doing the bidding of their ideological partners in Congress, won't have to worry about any laws impacting their actions.

posted on Jan, 10 2021 @ 06:43 PM
link
Furthermore lets look at what censorship will do. its goign to further divide people =. because people will only have discourse with people and venues that they feel are safe, meaning they will only have conversations with people of thier own tribe.. That twitter will only be for democrats and what not and you might have another platform for republicans.

censorship does not help discourse. and is only goign to further divide.

posted on Jan, 10 2021 @ 06:49 PM
link
Funny you mention cakes and bakers... because the precedent was set that it was ok for a baker to refuse making a wedding cake for a gay couple

originally posted by: HunkaHunka
Funny you mention cakes and bakers... because the precedent was set that it was ok for a baker to refuse making a wedding cake for a gay couple

I thought the Public Accomodation Law basically forced the baker to make the cakes.

posted on Jan, 10 2021 @ 06:52 PM
link
I've recently distanced myself from most of my acquaintances, mostly because of political ideas. I have also lessened my 'chatting' at my places of employment and stay to myself a bit more. Even though we are mostly in agreement I don't want to appear passionate one way or the other. I trust completely only a couple people in my life. I have been thinking a great deal recently about the loss of freedoms and the government using citizens to spy and narc on each other. We won't need a lot of LEO's in many areas, the people will police each other. The government will press harder and harder for social conformity.

And before the deniers come out of the woodwork, it's already happening. People tattling on each other for too many in the same place during the Covid19 shutdowns. Even the elite are getting nailed for their actions of hypocrisy albeit justifiably so, while we all cheer. Although it isn't happening in large numbers...YET, it IS happening. And if you look around the world at many other countries, you can see it. If you look at history, you can see where it has happened. So, it isn't anything new. And now we hear it constantly, at least I do: We need to get along, we need to heal, we need to unite blah, blah, blah. It all sounds good, kumbayaish and all. But the left is really pushing this agenda. They don't want any problems while they hold the reins. They don't want the discord they so generously dumped on the people of the USA, the businesses they shut down, the harm they did to so many others, the millions of dollars in damage they caused. No, they want it all peaceful and quiet now and for everyone to forget the violence and hatred and mahem we have all been living with the last few years. And they will do all they can to make sure everyone tows the line.

The loss of freedom of speech is very connected to freedom of thought. All speech needs to be more 'careful' so as not to offend others. It seems so many of us are walking on eggshells because everything seems to be offensive these days.

Reminds me of the Stepford Wives or Invasion of the Body Snatchers.

That is the point.

You cannot refuse to bake a cake for anyone.
At least not to anyone on the left


But Apple can certainly refuse to bake Parler's conservative cake.


Quite aside from the fact that you do not seem to understand that free speech is exactly that: FREE, as in UNMODERATED.

originally posted by: HunkaHunka
Funny you mention cakes and bakers... because the precedent was set that it was ok for a baker to refuse making a wedding cake for a gay couple


Several similar cases had dozens of conflicting laws, nobody knew which law had priority over other laws 😎

Which case are you referring to? 😎