I Found Who Created Covid 19, The Process, And The Why

Unless I see a real reason to not believe this is how Covid19 was created, I will be sharing this post tonight to millions by putting my marketing firm on it. 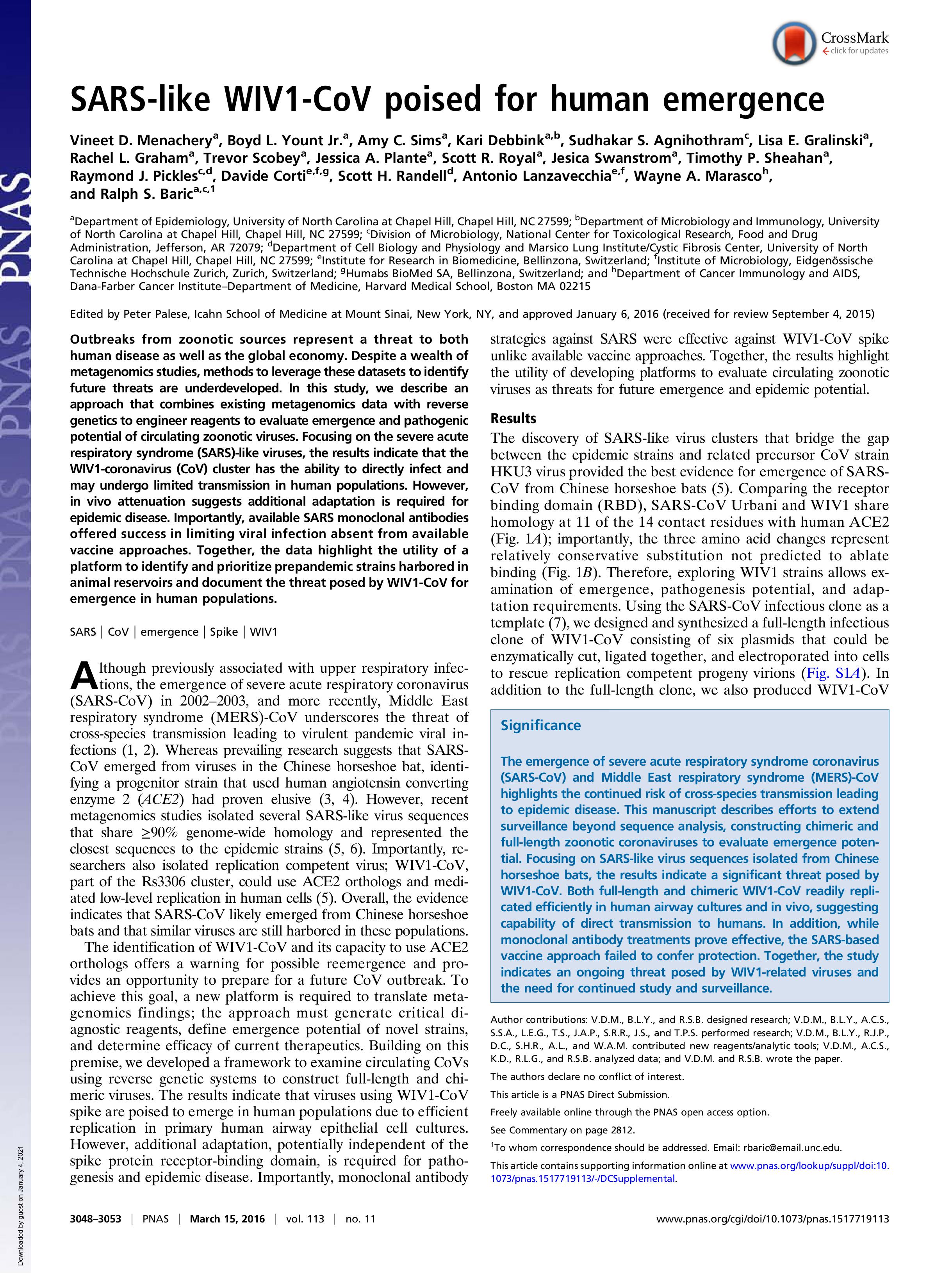 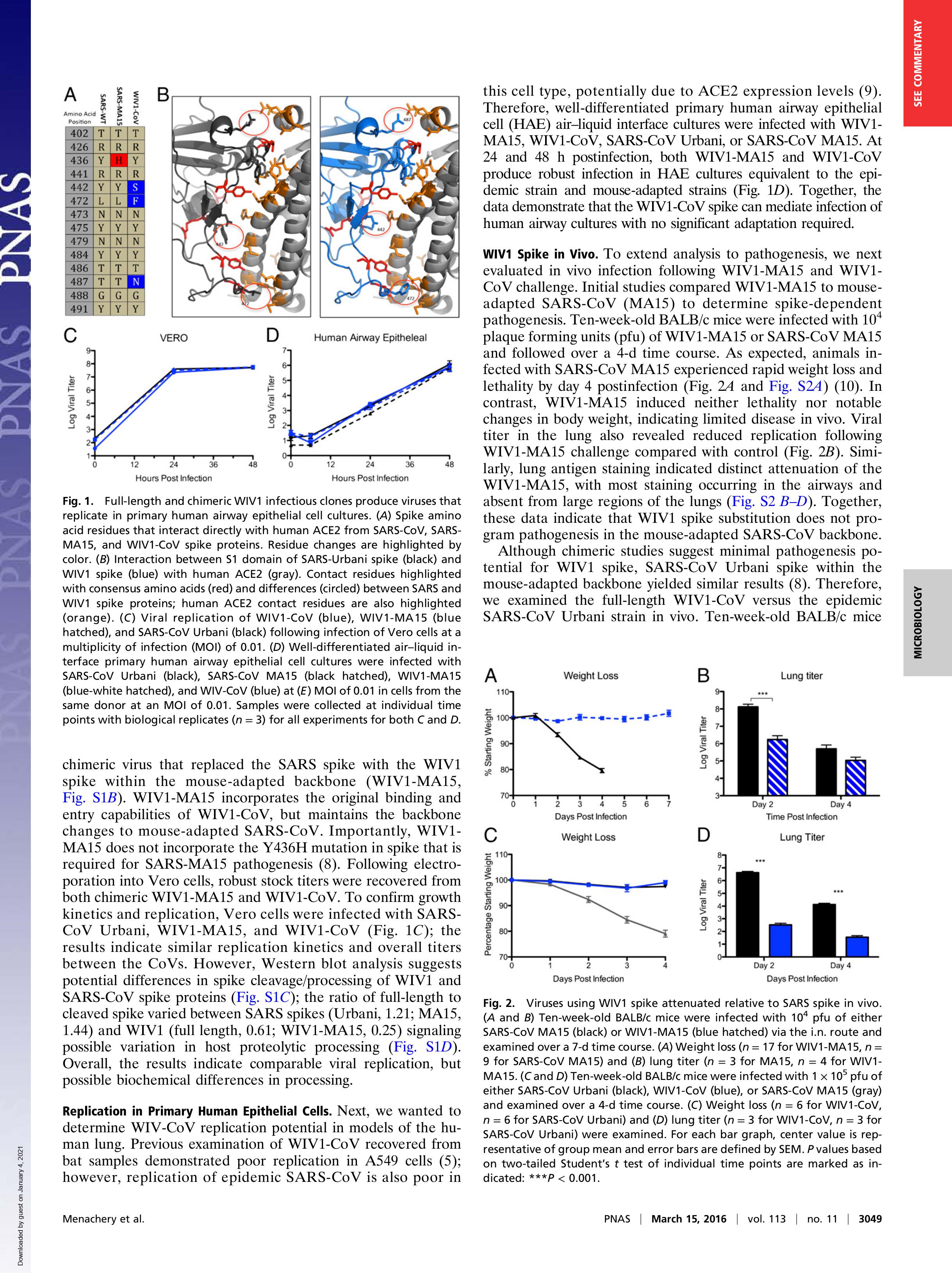 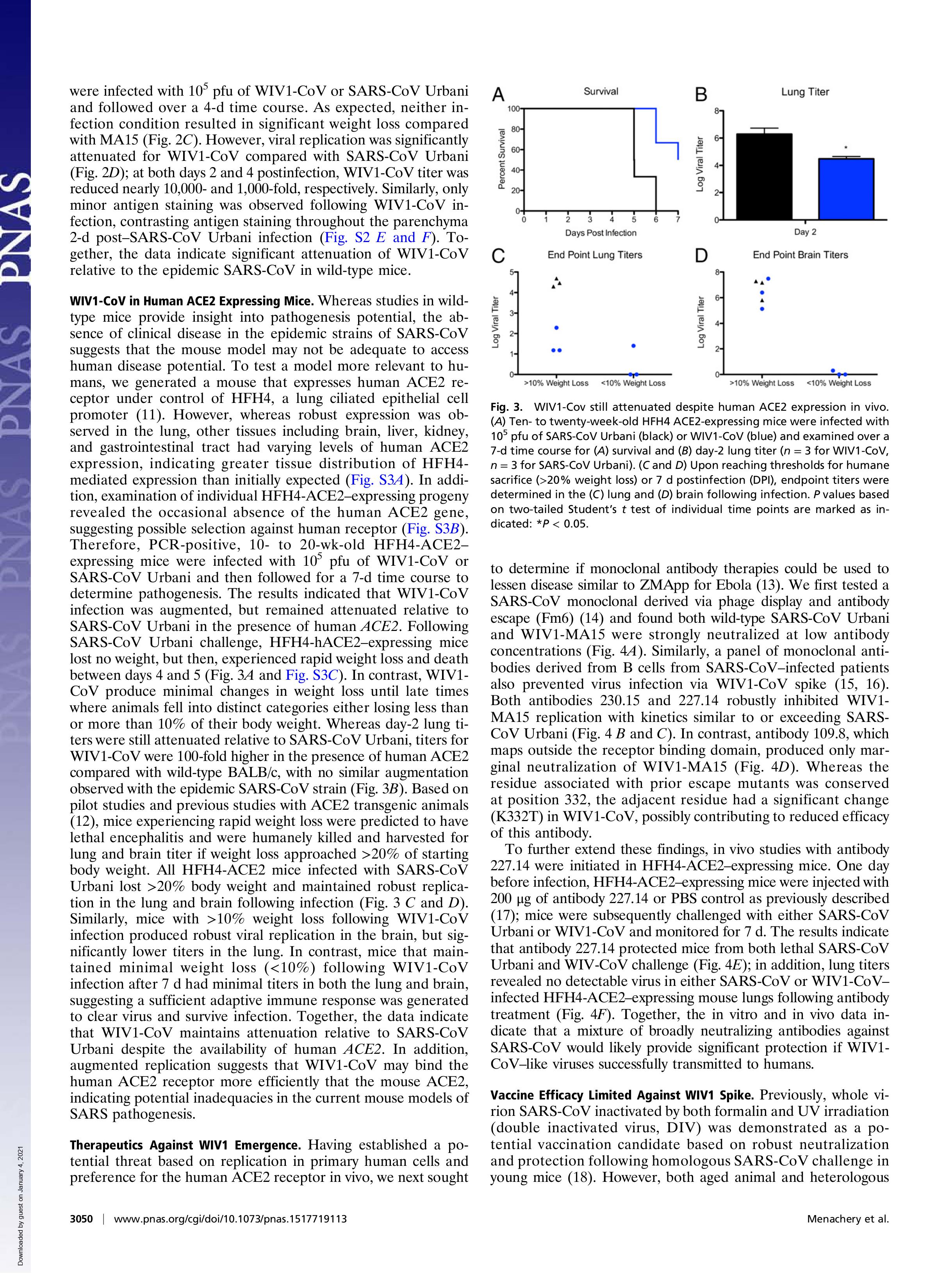 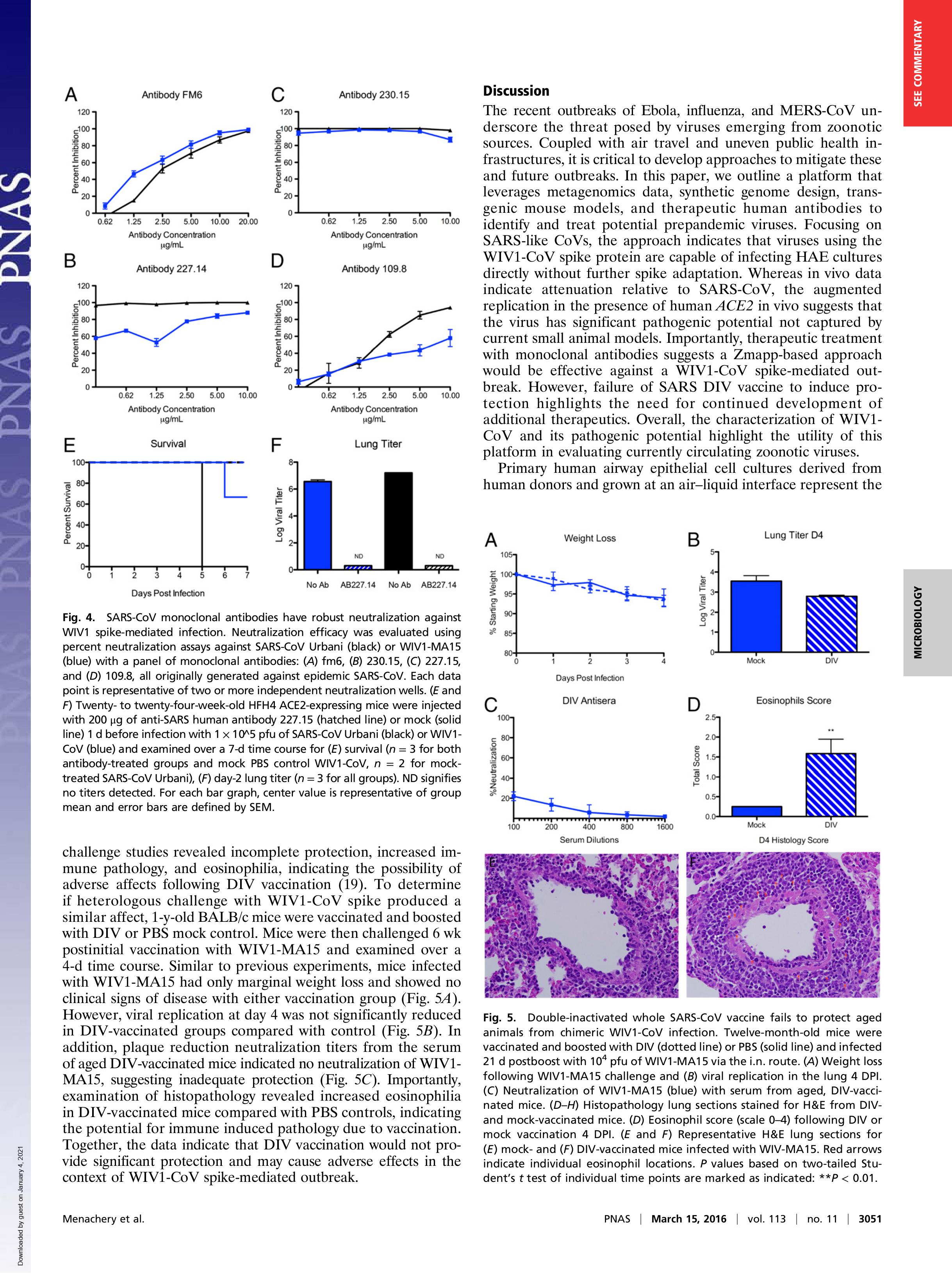 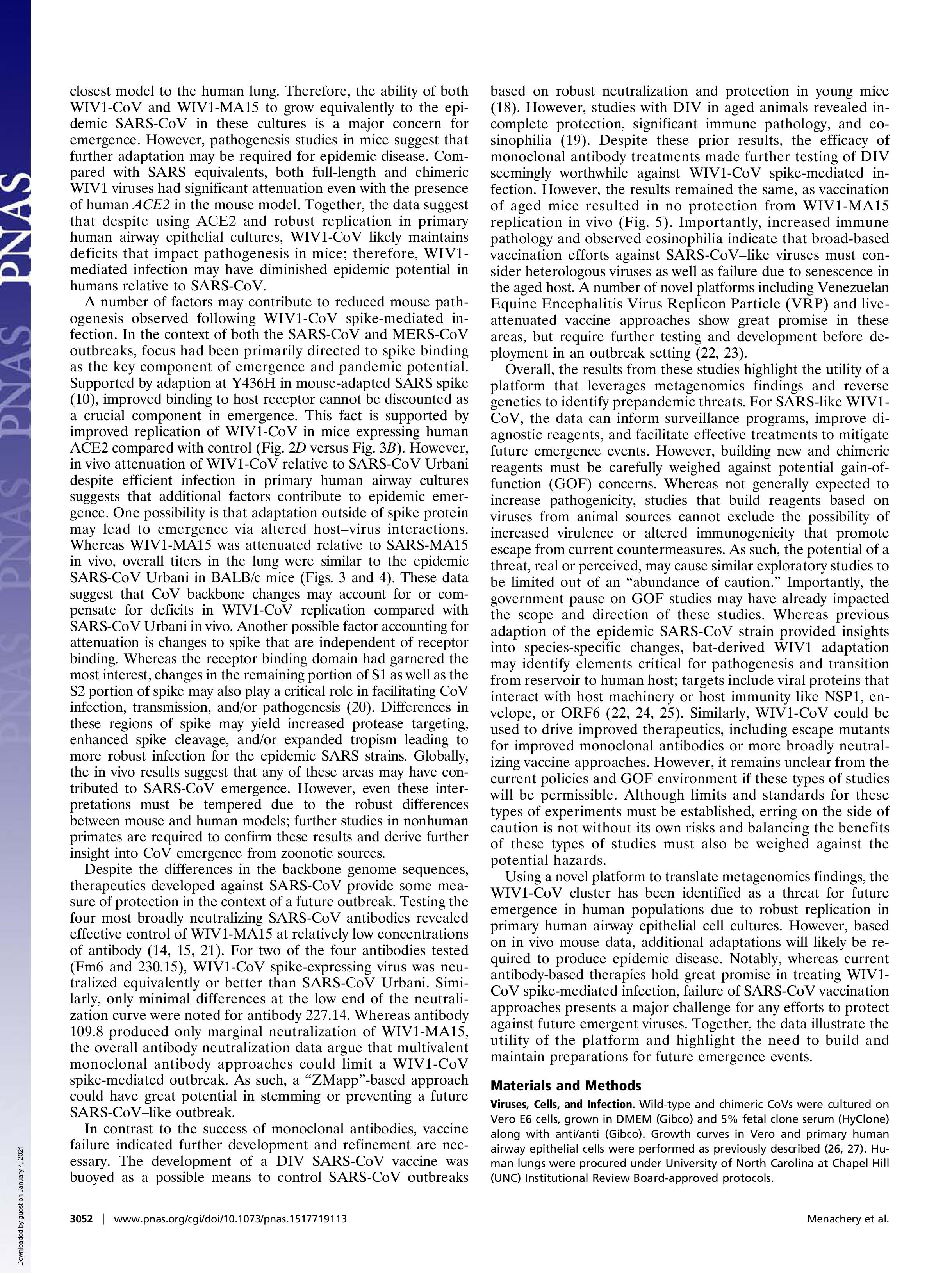 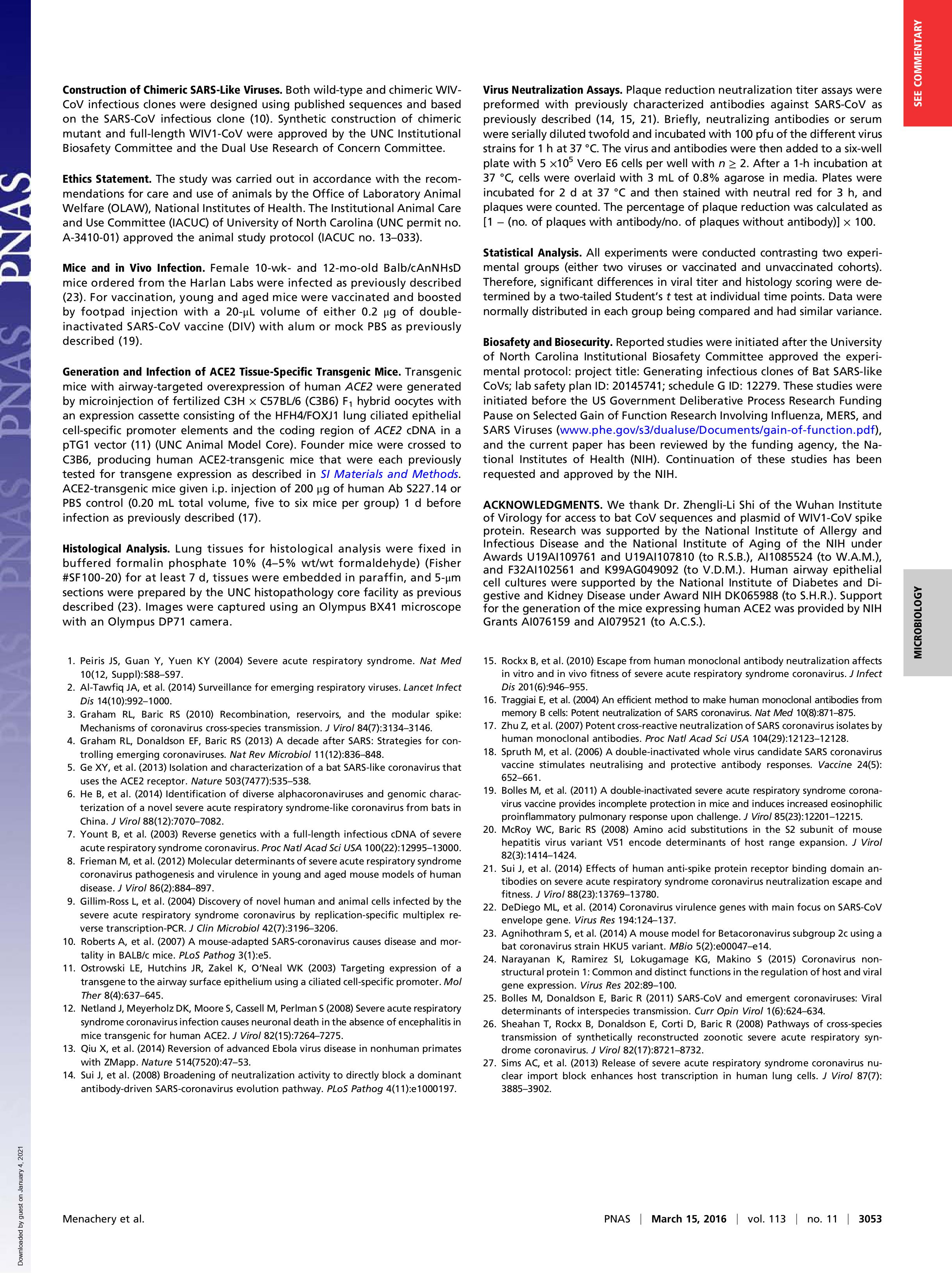 These are screenshots of a press release that was posted the same day as the docs above and was made to defend the fact they were making Covid 19. Links below to actual press release. 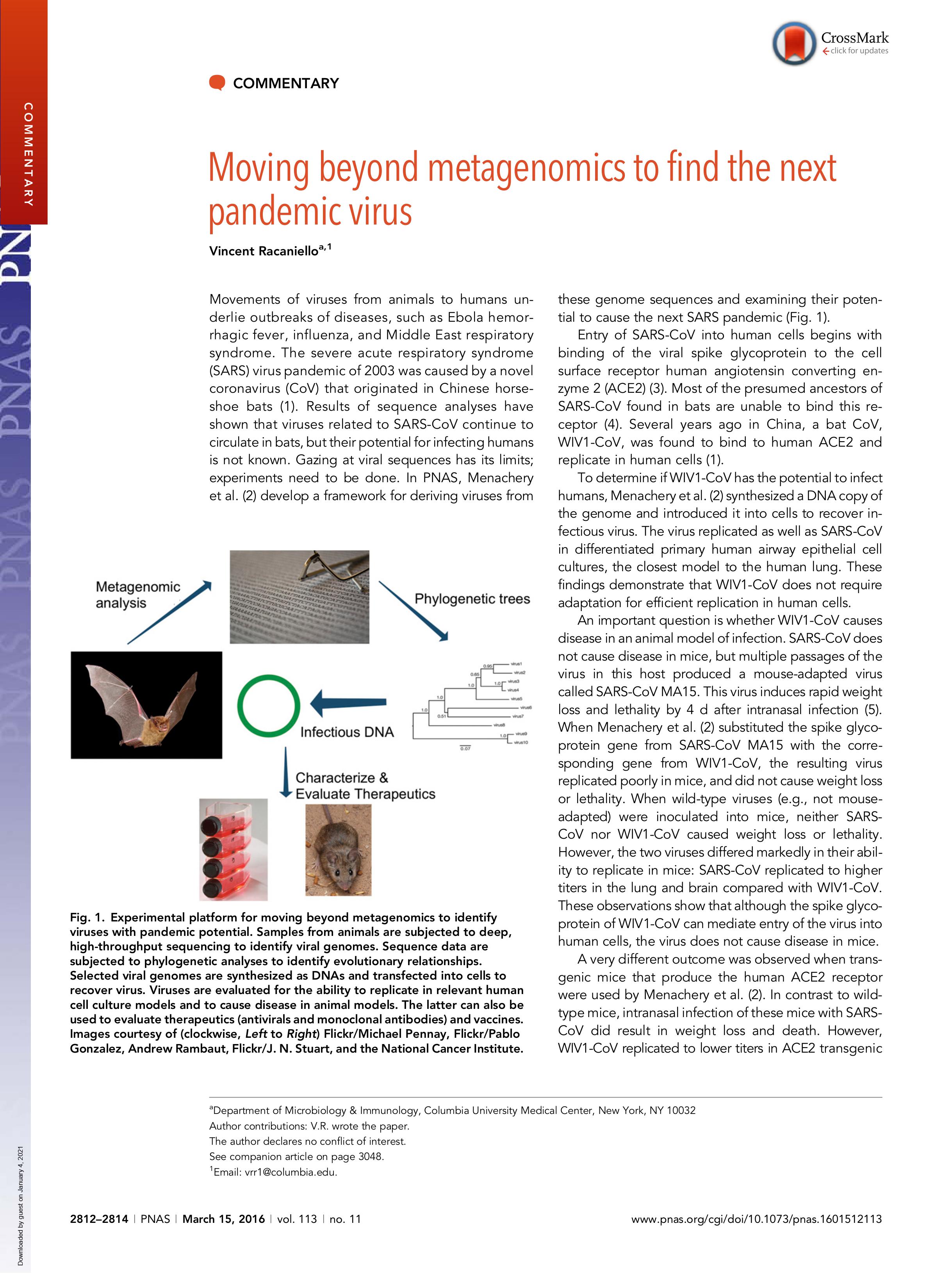 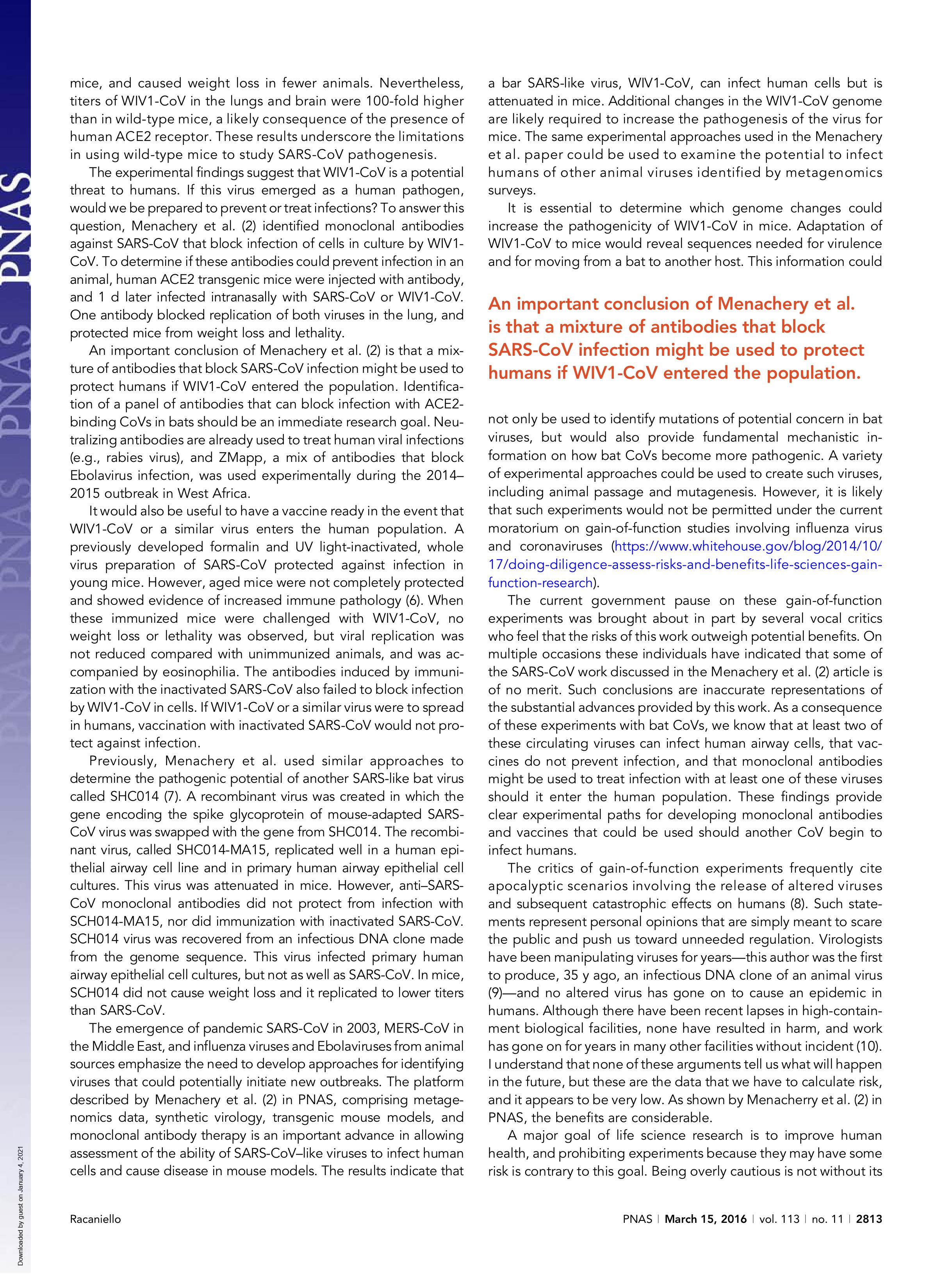 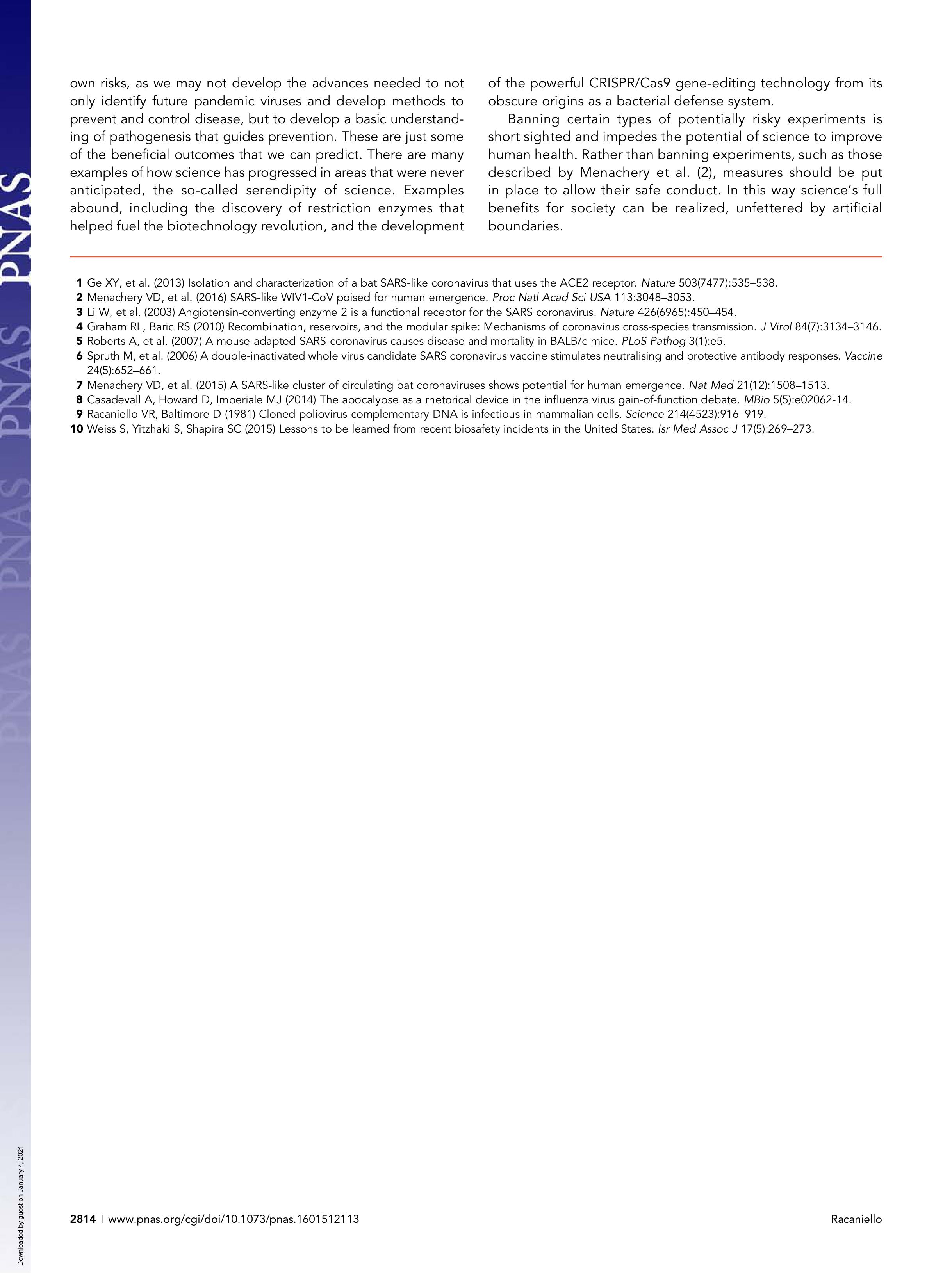 
These reports came out March 2016 right when Trump was gaining steam and calling for a trade war with China. 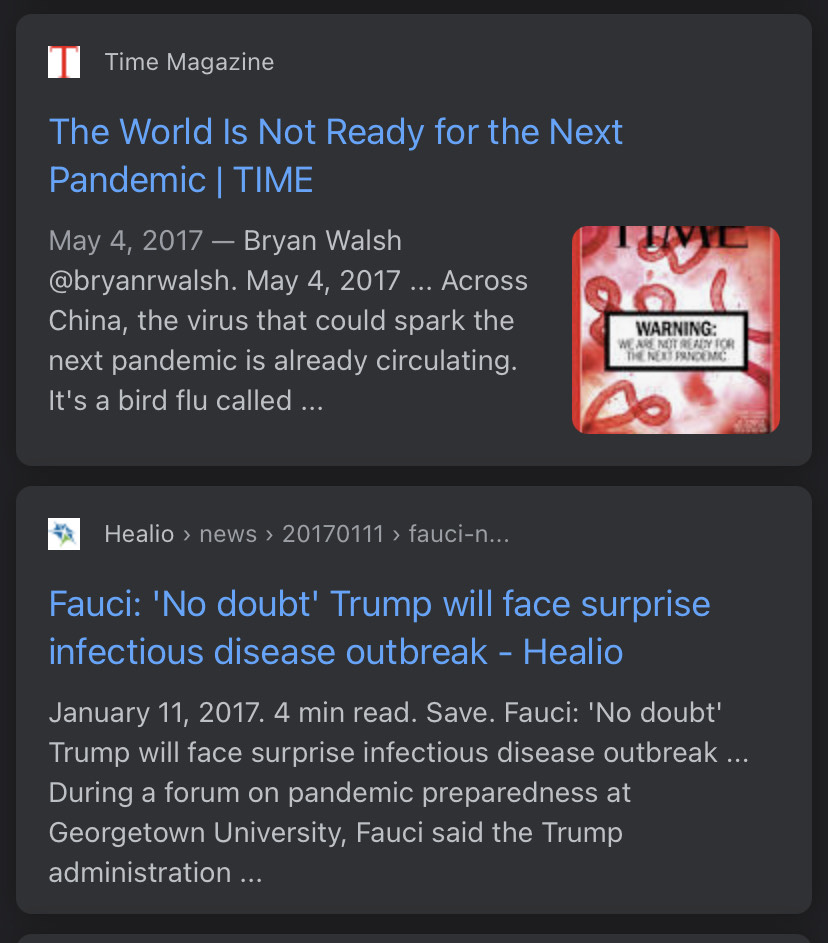 That's all I got. Probably easy to tie any individuals named in the PDFs to the final result we are experiencing today with a little bit of Google Research.
No Trophies

I feel more comfortable putting this here than doing anything else with it. So let me know bc I didnt post this as a joke and I feel confident what im reading is what I am claiming.
edit on 4-1-2021 by tonycodes because: (no reason given)

Anyway. I also heard there was no fraud or peculiar abnormalities with this year otherwise political, economic, social, etc so I guess we are good.

So. It couldn’t be an act of war, or even retaliation.

Edit: anybody heard anything about the HK protests or yellow jacket revolt lately? My sources gone dark.......

posted on Jan, 4 2021 @ 05:29 PM
link
Most of this information has already been posted here in previous months. We know about the warnings, so did our government. There are no more secrets, especially in publicly available information.

"Thank You indeed", Take it easy, Happy New Year, and Full Best Wishes for Years Ahead.

I feel more comfortable putting this here than doing anything else with it. So let me know bc I didnt post this as a joke and I feel confident what im reading is what I am claiming.

Pretty sure that hardline grizzled CCP general that gave the speech about “the America problem”
agrees with you....
edit on 4-1-2021 by slatesteam because: (no reason given)

Big pharma might have something to say about an antidote. Just a thought.

originally posted by: tonycodes
Like a cat on a hot tin roof to see what yall think. Just trying to do my part as not just an American, but also a human. Let me know. This would be the source of an antidote too. A real one.

Antidote or anecdote? Because Hoo boy if it’s the latter and you weren’t in the “Update Threads” there’s more reading in there than I ever care to do again about such things. Pretty sure it fried my nervous system.

So can everyone go back out to play yet?


That's all I got. Probably easy to tie any individuals named in the PDFs to the final result we are experiencing today with a little bit of Google Research.

Extensively studied by Mark Oliver on listverse, and published there March 2020....it's a long story though, and you have work to do.

Zhengli-Li Shi (Bat Lady) is very interesting given that she publicly said that, 'they' had come across this virus in February 2020.

Ralph Baric (Team Leader) was heavily criticised by his peers for carrying out the, international experiment at all, and it was in Wuhan.

'Recombinent' is the operative word.

So, whatever the gameplay is, it's not confined to the Trump era, although Trump would be a useful idiot down the road.
edit on 4-1-2021 by smurfy because: Link.

originally posted by: Cobaltic1978
Have you handed this information over to the appropriate law enforcement agencies?


Thank You. And I completely agree that the wheels have been in motion for a while. Harvard and Switzerland literally are named in the docs too.

posted on Jan, 4 2021 @ 07:32 PM
link
I almost got the full path of the coronavirus variations being genetically changed and made to its Covid19 form using CRISPR-Cas9 in stable labs here in NC. The natural version of the original Cov variants were constantly changing and random which is why they existed sometimes mysteriously appearing in places doctors didnt expect and the symptons could change from person to person. This is why they wanted to make it stronger so it would be more obvious what the strongest traits were. Nature got it right, these idiots played God and made this into a weapon.

The obama admin paid out alot of money to research lots of outbreaks around the world. That funding was eventually pulled. Once I find where the variants made in NC pop up in Wuhan, Ill post it. The trend im seeing is leading me to believe once funding was pulled, the nasty versions of Cov made in the USA were sent to Wuhans unsecure lab. Also all the other diseases that were being funded to be studied never became an issue, only this one that was specifically being genetically altered AND it seems it was being altered to trigger the other diseases that funding was sent to study. I have a feeling that funding was sent worldwide to just pay off powerful people for support, and they were tweaking these diseases to be more like weapons.

Here is another link and info from what im looking through. If they think this overly technical crap, hidden in plain site, wont show a linear progression to whats happening today, they are highly mistaken. Criminals are stupid inherently based on their adoption of the title.

I aint no criminal.

ARTICLE DETAILING HOW THEY MADE COVID STRONGER

Intravascular crawling and signaling through RhoA induces actin, microfilament and microtubule reorganizations and the production of endothelial cell docking structures, which surround the inflammatory cell and span tight junctions [56]. Although controversial, myofibril contractile structures may also contribute in to the assembly of these structures. In any event, inflammatory cell transmigration requires the formation of actin-myosin II contractile structures which are attached to tight junction membranes by VE-cadherins, resulting in increased endothelial tension, and programmed separation and expansion of the tight junctions which allow for leukocyte/monocyte passage into the surrounding tissues [61]. It seems likely that Trim55, with its roles in myosin and myofibril maintenance and microtubule organization, contributes to the programmed formation of endothelial docking structures and regulation of inflammatory cell transmigration; key features associated with the formation of perivascular cuffs around vessels in the lung. Our data (Figs ​Figs55 and ​and66) demonstrate that Trim55 contributes to vascular cuffing following SARS-CoV infection. While the mechanism is not yet fully understood, the data strongly suggest that Trim55 is important for extravasation of inflammatory cells, and thus overall SARS-CoV pathogenesis, by altering intercellular junctions and chemotactic signals. Increased studies of Trim55 and Cdhr2 function within the CC population, either via specific crosses of lines with high and low alleles at the HrS1 and HrS4 loci, or via CRISPR-Cas9 modification of these loci will allow further insight into the role that these two genes play during SARS-CoV pathogenesis and recovery, as well as increasing understanding of the more general process of extravasation.

The Collaborative Cross was conceived of as a resource to drive insight into a variety of biomedically important diseases via the reassortment of genetic variants and expansion of phenotypic ranges [62]. Indeed, previous studies with various preCC subsets have demonstrated expanded phenotypes in preCC mice body weight and hematological parameters [23,63,64], response to Aspergillus [65] and susceptibility to Influenza A infection [27,66]. More recently it has been shown that novel combinations of alleles have also resulted in new models for human disease such a spontaneous colitis [67], and that F1 hybrids of CC mice were used to create an improved mouse model for Ebola virus disease [68] including hemorrhagic signs of disease previously not observed in a small animal model. Within our study of SARS-CoV infection within the preCC, we showed more extreme disease phenotypes than those seen within the eight founder strains of the CC. These disease phenotypes included virus titer, weight loss, pathology and lethality. Further, we saw the emergence of new phenotypes including ARDS and DAD not traditionally seen within young inbred strains [11]. Importantly, our results highlight another exciting aspect of the nature of CC genome: transgressive segregation, or the release of cryptic genetic variation [69,70]. As the three wild-derived CC founders all showed mortality early in the course of SARS-CoV infection, genetic variants within these three strains impacting later-stage SARS-CoV responses would normally not be seen. Only via the reassortment of these alleles into a variety of genetic backgrounds (some resistant to clinical disease, some susceptible) were we able to show that alleles from all three wild-derived founders impacted perivascular cuffing or viral titer levels independent of their effects on clinical disease or SARS-CoV mortality. Collectively, these data support the hypothesis that the CC population represents a robust platform for developing improved animal models that more readily replicate disease phenotypes seen in human populations. All told, our identification of multiple QTL related to SARS-CoV pathogenesis, identification of a novel function for Trim55, and the development of new models of acute lung injury, further solidify the utility of the CC as a valuable community resource for research of infectious diseases and other biological systems driven by complex host response networks.