Avi Loeb, the chair of Harvard’s Department of Astronomy, believes he’s already found some of that garbage.

In his upcoming book, “Extraterrestrial: The First Sign of Intelligent Life Beyond Earth” (Houghton Mifflin Harcourt), out Jan. 26, the professor lays out a compelling case for why an object that recently wandered into our solar system was not just another rock but actually a piece of alien technology.

Here's some of the points he makes:

A number of unusual properties about the object helped Loeb make this conclusion.

Astronomers looked at the way the object reflected sunlight. Its brightness varied tenfold every eight hours, suggesting that was the amount of time it took for it to complete a full rotation.

Scientists concluded the object was at least five to ten times longer than it was wide — sort of like the shape of a cigar.

No naturally occurring space body we’ve ever seen has looked like it — or even close.

“This would make ‘Oumuamua’s geometry more extreme by at least a few times in aspect ratio — or its width to its height — than the most extreme asteroids or comets that we have ever seen,” Loeb writes in his book.

He likens its surface to that of shiny metal.

But the anomaly that really pushed Loeb toward his E.T. hypothesis was the way ‘Oumuamua moved.

“The excess push away from the sun — that was the thing that broke the camel’s back,” he said.

Using physics, scientists can calculate the exact path an object should take and what speed it should travel due to the gravitational force exerted by the sun. The sun’s pull will speed up an object massively as it gets closer, then kick it out the other side, only for the object to slow considerably as it gets farther away.

But ‘Oumuamua didn’t follow this calculated trajectory. The object, in fact, accelerated “slightly, but to a highly statistically significant extent,” Loeb writes, as it moved away from the sun.

In other words, it was clearly being pushed by a force besides the sun’s gravity alone.

He thinks the object looks more like a sail than some of the usual artist renditions. 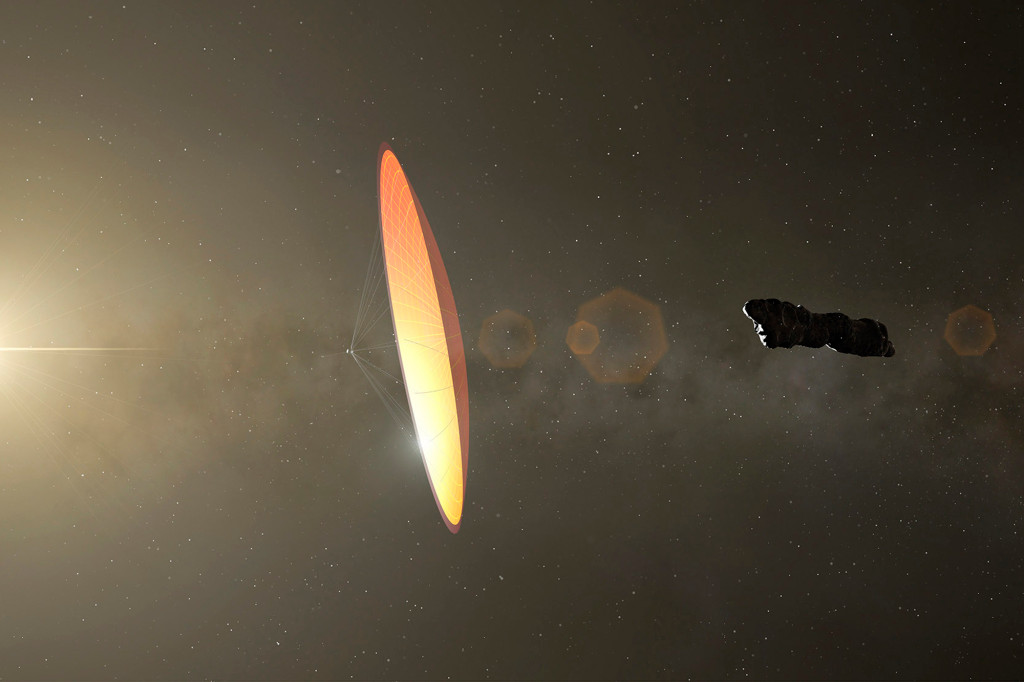 I think this is a conversation that's needed. Personally, I believe there's more than enough evidence to support the existence of extraterrestrial and extradimensional beings and their visitation to our planet.

We're in a place where pseudoskeptics accept any explanation without weighing the evidence. These things should be put on a prability scale which includes the extraterrestrial/dimensional explanation. You just can't throw out any natural explanation and then shut off critical thinking.

If you look at the evidence, there's clearly things that say Oumuamua wasn't a comet. If you noticed, they blasted ou an artist rendition of it that was everywhere. 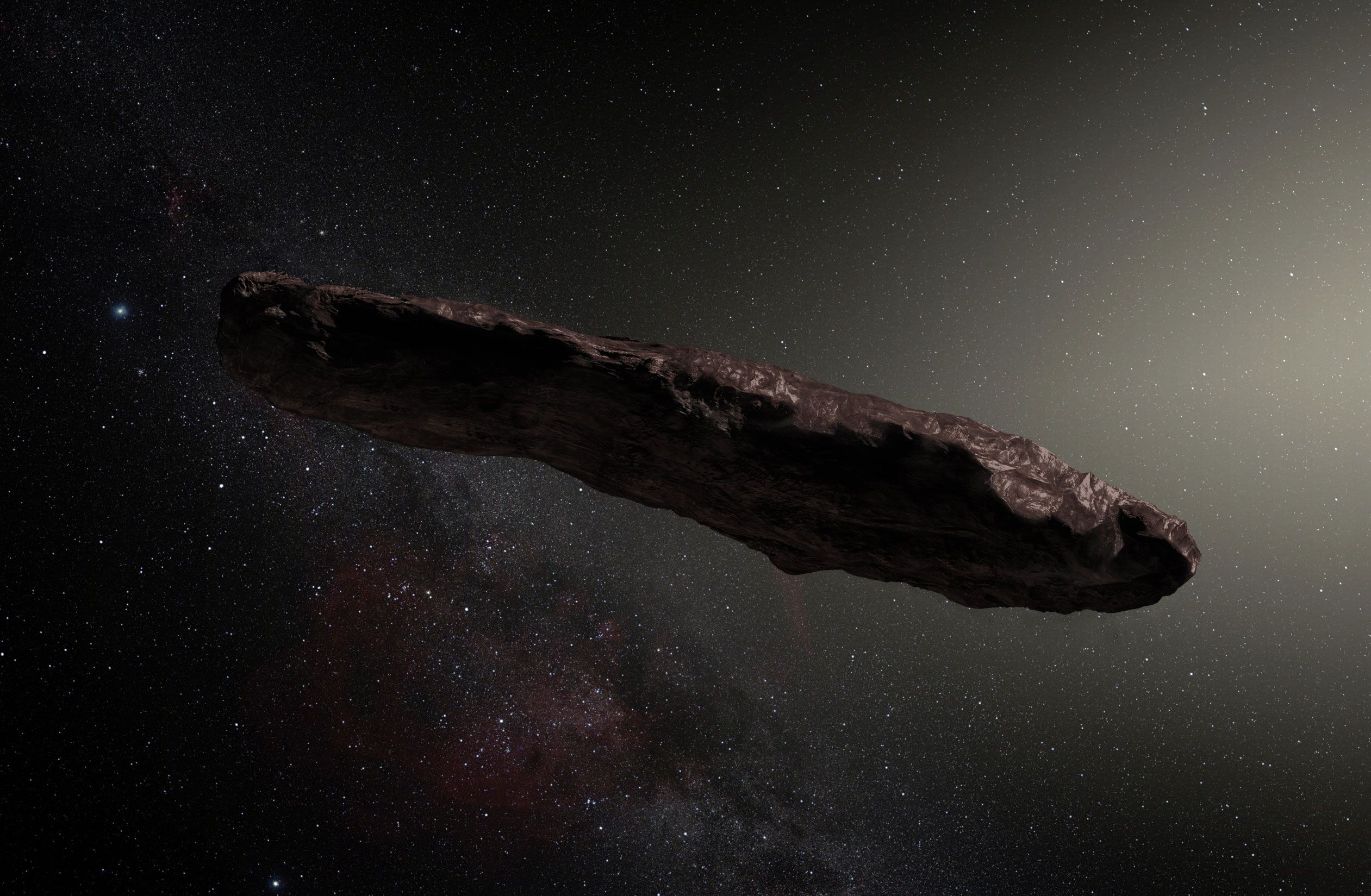 Of course this was designed to make it look like a floating rock. So most people stopped asking questions once they saw the artist rendition.

“What would happen if a caveman saw a cellphone?” he asked. “He’s seen rocks all his life, and he would have thought it was just a shiny rock.”

Article says it just might be interstellar discarded tech.

Trash
edit on 2-1-2021 by TheAlleghenyGentleman because: (no reason given)

posted on Jan, 2 2021 @ 02:56 PM
link
a reply to: neoholographic
Well,true or not I like the idea of it being an alien ship.
But the worrying thing is why it didn't stop by for a visit.

I can only assume it was one of the more sensible alien species who sussed us out from a safe distance,before deciding we are too crazy to risk interacting with.

However, this from the article.


The object, in fact, accelerated “slightly,

Therefore it was more than just discarded space junk.

posted on Jan, 2 2021 @ 03:03 PM
link
The part about the object pushing away from the sun with MORE force than just the sun's gravity is quite interesting..

Wouldn't NASA already have known that as well? NASA isn't known for sharing everything they know about "things", so now hearing about this from a college professor. It's a start I suppose.

posted on Jan, 2 2021 @ 03:12 PM
link
The most intriguing thing about it, is the fact that this has many academicals scratching their heads and pointing the finger to it being of a 'alien' origin.
We dont often see this, its normally the UFO buffs who push this kind of thing. It's so out of the norm, much like the object itself.

What if the "probe" was communicating using some technology that was utterly indecipherable/unrecognizable to Earth. Using some form of quantum entanglement to permit FTL data transmission is something that is raised in a lot of sci-fi novels, and some (more fringe IMO) corners of science, but there are doubts about the feasibility of this. However, for the sake of argument, if this were viable and in use, we'd simply have no way to recognize it, being an entirely different paradigm than radio transmissions.

I think many in the field of astronomy, based on the reading I've done in news stories, are /highly/ skeptical of this man's claims, and feel he is deliberately hyping his theory of the object as an alien probe for publicity, and to get his name out in the media. Based on that, I have taken this notion of it being some type of alien craft, with a grain of salt.

I am very skeptical but remain open (even hopeful) to the idea that this could be something other than a stray asteroid with a strange pattern of movement; the odds of it being so are very low IMHO.

.....but if it was a " probe " would it not have been sending transmissions back to it's home planet ?

Could it be that it didn't see anything worthy of writing home about?

Or maybe it waited until it was out of our hearing distance before delivering its report?

I think it's safe say that whatever that thing was made of, to us it's a yet to be discovered element.

What if that shard held the secrets to interstellar space travel and we missed it because we were too busy bickering and not advancing?

Maybe it will come round again and we'll be more prepared to investigate it properly but I doubt it.

originally posted by: Gothmog
Free advertisement for his upcoming book.
That is all to see here.

posted on Jan, 2 2021 @ 05:14 PM
link
Well, it was going pretty fast, but in a few decades we'll have probes probably able to catch up with it. It's still in the "neighborhood.". Might be worth it to the Japanese to make a mission of it.

Not sure how that word works


Just did , and answered.

However, the person using 'Harvard Professor' as an appeal to authority might want to reconsider as one Harvard Prof urged everyone to take acid and drop out and another thought little unknown beings were abducting and buggering folks in their sleep.

I happen to think both of those Profs were ahead of their time and somewhat right thinking ... but I'm a textbook kook.