Remember When There Wasn't Enough Sanitizer?

page: 1
41
<<   2 >>
log in
join
share:
ketsuko
+15 more
posted on Dec, 31 2020 @ 12:04 PM
link
You can recall, right? People were panic buying it left and right, and they couldn't keep it on the shelves. At the same time, a lot of distilleries were in danger of going out of business because bars and restaurants were shut down, tourism was gone, etc. So what did a lot of them do?

They stepped up and converted their operations over to distilling alcohol for sanitizer.

Guess what their gift is for supplying a public health need and doing their level best to stay in business for themselves and their employees?

Then this week, just as it seemed they'd made it through the worst of a terrible year, the Food and Drug Administration (FDA) had one more surprise in store: The agency delivered notice to distilleries that had produced hand sanitizer in the early days of the pandemic that they now owe an unexpected fee to the government of more than $14,000.

Not only did the distilleries step up, but they also invested in a denaturing process because ethanol for sanitizer has to undrinkable. So they were out money on top of the losses from not being in the regular business.

At issue is a provision of the CARES Act that reformed regulation of non-prescription drugs. Under the revised law, distilleries that produced sanitizer have been classified as "over-the-counter drug monograph facilities." The CARES Act also enacted user fees on these facilities to fund the FDA's regulatory activities. For small distillers, that means ending the year with a surprise bill for $14,060 due on February 11.

But a lot of the distilleries who did this did it solely as a public service and as a means to stay afloat meaning they charged typically barely enough to bring back furloughed employees and keep in business donating as much of what they made as they could. So being caught with this bill is insult to injury especially where it's not like they're flush with cash at this point anyhow. And to make matters worse, if they can't change their listed status with the FDA before tomorrow, they'll be hit with the same fee next year no matter what they end up producing.

And the regulatory changes were never intended for businesses like the distillers in the first place even though the FDA website says businesses producing sanitizer are not exempt.

Paying a surprise $14,000 bill would be a challenge for small businesses in any year, but it's a particular challenge for craft distilleries in 2020. An industry survey conducted earlier this year by the Distilled Spirits Council of the United States and the American Distilling Institute projected that sales revenue at craft distilleries would decline by more than $700 million this year, amounting to approximately 40 percent of their sales.

For many distillers, the unexpected fee assessment from the FDA thus arrives as one more substantial blow in an already devastating year. "If you were making sanitizer for your community at a limited capacity, this should not be something you have to deal with," says Harris. "It will be a slap in the face to make it through all of this and then get hit with this bill."

Just one more example of government "helping" small business out of business.

The scariest words know to mankind.

"I'm from the government and I'm here to help."

If Biden and his club are serious about ''pulling together'' to stomp out this virus, it seems to me that his new administration has about ten days before that February date to rescind those fees as a thank you to those small distilleries. He should do that. For that matter Trump should do it now. Make a final showing for small businesses.
Will either of them do it? Hah.

The federal government might as well give itself a slogan; “F*ck you, pay me.”

Those of us who have started businesses and dealt with the bureaucracy know how asinine some of this stuff can be. It is maddening. 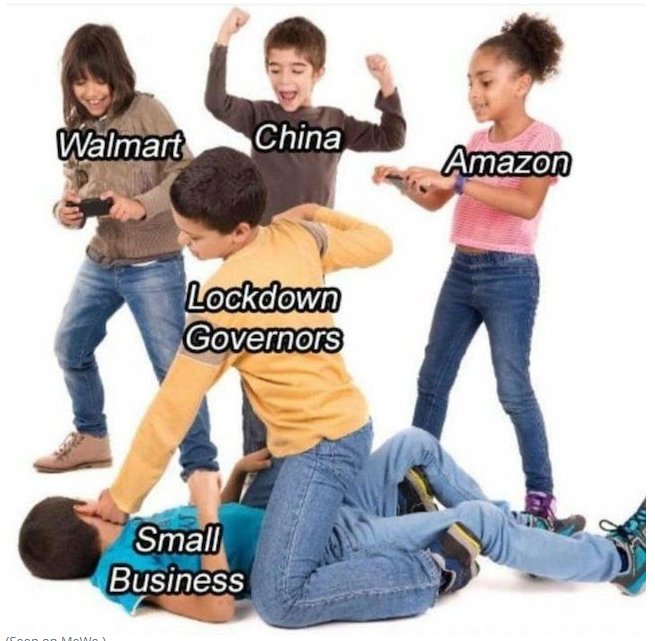 Those of us who have started businesses and dealt with the bureaucracy know how asinine some of this stuff can be. It is maddening.

Between QC and now Reg Affairs, when I told my husband this story, his face got tight and his hands balled into fists, and he just said, "That is the sort of thing I hate about dealing with regulatory."

posted on Dec, 31 2020 @ 12:41 PM
link
I've said many times and in many places that the next "stimulus" should come with a complimentary tube of KY jelly.

Looks like it's coming rather with a sandpaper wrap.

Also, the hand sanitizer is all anti-BACTERIAL, right? And everyone was getting it to stave off covid?

originally posted by: KansasGirl
Also, the hand sanitizer is all anti-BACTERIAL, right? And everyone was getting it to stave off covid?

It needs to be a minimum of 60% alcohol to kill viruses but optimally it needs to be 90% or higher which is also good at drying out your skin and creating cracks that permit all kinds of happy things to enter through which is why persistent use can cause warts.

Also, the hand sanitizer is all anti-BACTERIAL, right? And everyone was getting it to stave off covid?


Because people are generally stupid. And they do what they are told without reasoning, without questioning, without critical thinking.

It's part of the process of training people to blind, subservient obedience.

We would voluntarily stay home.

Is this what we’re being reduced to now? Hurting people that are not only just trying to survive but whom also want to help others in need? This is insanity.

The government is always waiting around the corner to give you a good shafting. Thanks for helping American in such a time of media created uncertainty. Bend over!!

Unfreakingreal
edit on 12/31/2020 by Kangaruex4Ewe because: (no reason given)

posted on Dec, 31 2020 @ 01:31 PM
link
a reply to: ketsuko
Here is another case of the government lending us a helping hand:
There is a nationwide bucatini shortage. It is like hollow spaghetti noodles.
The reason for the shortage is that environmentalists have taken to using the uncooked noodles as a replacement for plastic straws.
That didn't cause the shortage.
The government heard that people were doing this and decided to halt production and importation of bucatini because using the noodles as straws carries a risk of the user contracting salmonella.
I guess the government will outlaw the sale of eggs next?
The Great Bucatini Shortage