I've been next to cars that tell me to move away...or else. Particularly in Los Angeles.

posted on Dec, 25 2020 @ 01:54 PM
link
The message was coming from the vehicle, and some people are already calling the bomber the polite bomber.

There's some speculation that the bomber is more of a Kaczynski bomber than a McVeigh.

The thing is no one will know until either a manifesto is released or more bombs are set off.

Cell phone coverage has been #ty all day. I can only use my phone if it's using wifi.

It would be weird if the the thing shooting up into the air was a flare to set of the explosion. That would mean that it was set off by a remote detonator, perhaps a back up to the timer, or if the bomber was in the vicinity would be able to set off the bomb at a more opportune time.

But the flare thing? That's weird. Why would there be someone within proximity to shoot off a flare? Could have been a last ditch plan.

Or could there have been a trip wire for the flare?

Or it could have been a trick of the camera and it may not have been near where the explosion was and merely a coincidence.

I'm sure we'll find out soon enough. Bombers have big egos, and that's usually what gives them away.
edit on 25122020 by AutomateThis1 because: (no reason given)

posted on Dec, 25 2020 @ 01:55 PM
link
Just Talked to my Sister who lives in Tennessee and I used to work around that area a lot years ago. They said they have lost all the local Nashville news channels about 30 minutes ago. They do have Direct TV so no telling it it's a problem with Direct TV or the local feed. She said there were reports of gunfire in the area before the explosion.
The site seems to be right at 178 2nd Ave North. That's only a block or so from the State Capital building.
The warning before hand reminds me the Irish Republican bombings of the 1970-1990 during The Troubles. If it was meant for civilian casualties even that area is not very good. Not a whole lot of foot traffic on that end of Second Ave. And most of the bars and restaurants will be closed today.

Something else that has not made the national news that may or may not be related
Dec 23 2020, 21 Injured, 9 Critically, In Explosion At Baltimore BGE Building; Company Says Natural Gas Not Involved
baltimore.cbslocal.com...

At least 21 people were taken to area hospitals after an explosion at the Baltimore Gas & Electric building in downtown Baltimore Wednesday morning. Eyewitnesses told WJZ they heard and felt a large explosion just before 8:30 a.m. Then, they saw scaffolding fall from the building in the 100 block of West Fayette Street.

So that happened in Baltimore at a Gas and Electric office building, some one targeting Infrastructure?
Electrical substations would be easier targets since they are usually not guarded and out in the middle of nowhere.

Pretty clear that this was to send a message. Only other thing I can think of is for insurance money or something like that. The bomber didn't want to hurt anyone.

Possibly, also may have been a bombing gone wrong. The reports of gunfire before hand may be someone with knowledge of the bombing trying to stop it. It's all speculation at this point.

The recording telling people to evacuate is weird.

I hope they find the bomber before they can bomb again.


ETA - This reminds me a little of the bomber that was sending duds out to people.

Thanks that helps didn't think to do that.

I agree this is weird ... almost like a preview.

I agree this is weird ... almost like a preview.

Yeah the warning kind of makes me think like something is not entirely stable and can't make up their mind whether they care whether to kill people or not? Like I'm going to blow stuff up but it'll be nice not to kill anybody.

Hopefully not some kind of recurring thing with this person like serial killer by bomb, especially since it's a really big bomb. They could definitely kill a whole lot of people doing this kind of thing.

(post by wantsome removed for political trolling and baiting)
Irishhaf

Yea but for who..

False flag from a Govt..

also wondering, if this is a suicide bombing. Was the perpetrator in that RV? We don't know yet one way or the other.

All downtown Nashville roads, including interstates leading into the city, are shut down.

As of about 9:45 a.m. all roads leading into the city inside the downtown loop were closed including the following interstate systems:

The downtown area will be "sealed off" for further investigation and to make sure everything is "completely safe," according to Nashville Mayor John Cooper.

Nashville explosion: What we know about downtown explosion on Christmas morning

also wondering, if this is a suicide bombing. Was the perpetrator in that RV? We don't know yet one way or the other.


They still haven't confirmed if there was a body in the RV yet.

I think all they've confirmed in terms of human cost is three taken to hospitals. 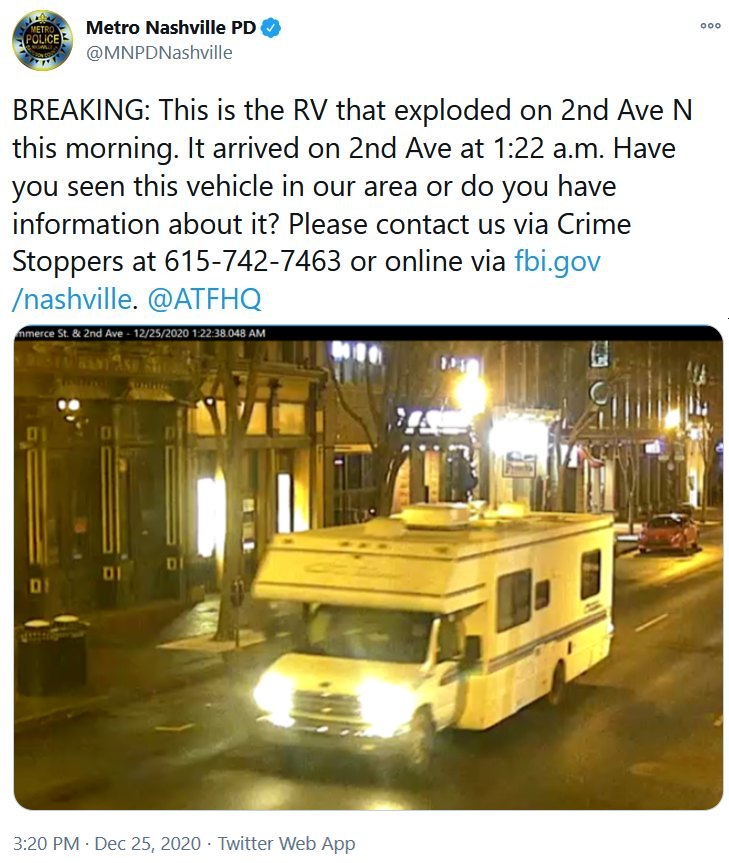 posted on Dec, 25 2020 @ 02:42 PM
link
Woman who lives in one of the buildings describes that this area is 4-5 story old-brick-warehouses and is mainly Air B&Bs with very few permanent residents. This time of year it is usually booked up with Holiday visitors.