originally posted by: CharlesT
a reply to: Vasa Croe

No it wasn't. It wasn't intended for either one you suggest. It was meant to send a message...
It was timed especially to avoid any casualties.

They have to know the odds are that they're going to be tracked down. A message isn't very good unless they can follow through on the promise it sends. And if that's the case, it's a very large problem indeed. That's a large bomb, and they're counting on losing some to the investigation but having enough others left to be able to follow through on that promise.
edit on 25-12-2020 by ketsuko because: (no reason given)

unless they can follow through on the promise it sends.


That is to be determined, isn't it?

posted on Dec, 25 2020 @ 10:52 AM
link
Maybe this was someone who was finally driven over the edge by the lockdowns on their business and decided to blow the whole thing up.

Here is security camera footage of a condo at 309 church in the Exchange Lofts. Video from Aaron and Tiffany Trevethan
#nashvilleexplosion 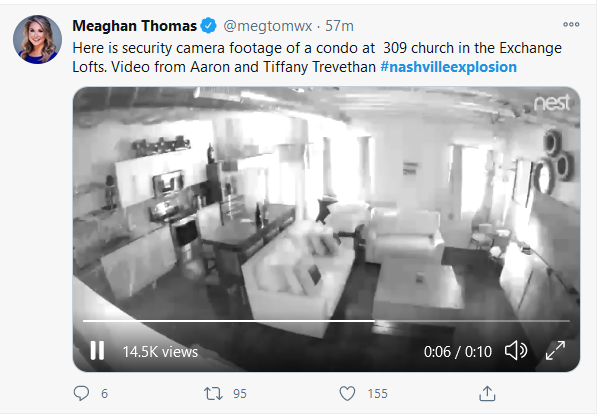 posted on Dec, 25 2020 @ 11:00 AM
link
This doesn't specifically name Nashville but it does mention ATT. Is this another of their collection points?
theintercept.com...

Atlanta, Chicago, Dallas, Los Angeles, New York City, San Francisco, Seattle, and Washington, D.C. In each of these cities, The Intercept has identified an AT&T facility containing networking equipment that transports large quantities of internet traffic across the United States and the world. The NSA considers AT&T to be one of its most trusted partners and has lauded the company’s “extreme willingness to help.”]The Intercept
edit on 25-12-2020 by CharlesT because: (no reason given)

It is being rumored that some folk are really upset about the pardons that Trump has given, especially the Blackwater pardons.

May or may not be related.

That wouldn't make a whole lot of sense either.

People angry about Blackwater pardons blow up a random downtown at a nonsensical time for any real anything to make a statement about nothing at an outgoing president?

There's no connection there. I'd expect something more direct I guess.
edit on 25-12-2020 by ketsuko because: (no reason given)

Not a lot of fire with tannerite. There's fire, but not that much, not like that explosion. That looked like a hell of a conflagration, flames above the buildings, etc. I'd say there was some sort of an accelerant like fuel oil, or something. 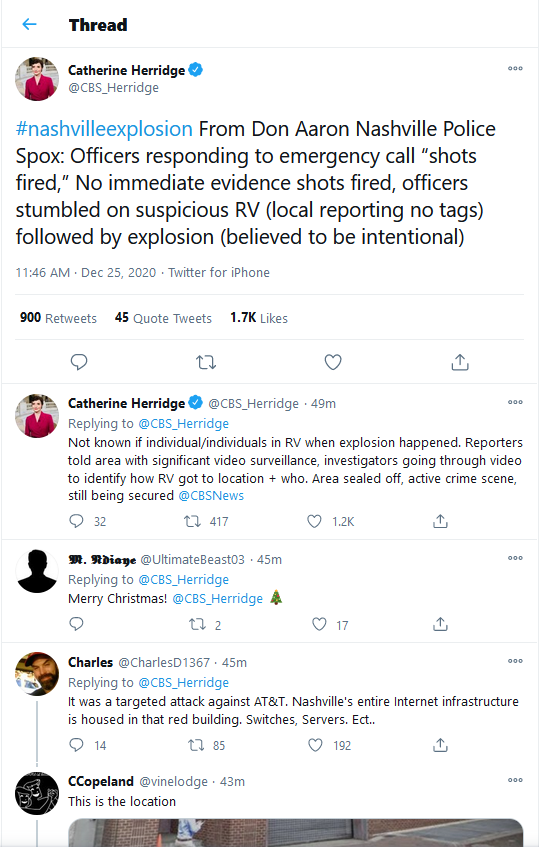 posted on Dec, 25 2020 @ 11:46 AM
link
The bomb was reportedly intentional. 911 call - shots fired. Law enforcement responded and called in bomb squad because of what they found.
Suspicious un-tagged RV. Bomb squad was either en route or perhaps just arrived - that's not clear. Timing was either as intended, law enforcement may have been targeted as they were on scene investigating or perhaps it was set off early to destroy evidence. 3 injuries reported thus far. Would expect far more casualties from the size of the damage area. M.O. almost looks the same as an arsonist who targets a building when they knew it would be empty.

Fact is it's Christmas morning, so somebody is looking for major media coverage. Could be religious fanatics, but those types usually go after more casualties, so probably not the typical foreign based terrorist attackers. More likely domestic type terrorism. Somebody mad about current politics, angry at law enforcement or the election etc. Judging by the multi block damage I'd speculate the bomber was hoping for more significant damage, but they didn't know what they were doing with the exception of concealing the device in a large mobile vehicle with a significant amount of explosive material.

My speculation is someone has some serious hatred issues, wants lots of attention and this is their message. Lots of ways to kill people with a lot less effort, so I really doubt killing was their main intention. Probably a small offshoot of one of these domestic [snipped] extremist hate groups we hear about in the media recently.
edit on 12/25/20 by verylowfrequency because: sp

posted on Dec, 25 2020 @ 11:51 AM
link
24 second video showing explosion from a distance where "something streams up in the air" beforehand.

posted on Dec, 25 2020 @ 11:55 AM
link
THIS IS A FALSE FLAG. CNN AND FOX ARE BUILDING THE NARRATIVE SAYING TRUMP IS GOLFING. ON THE HEELS OF THE BILL VETO. NOT BUYING IT AND YOU SHOULDN'T EITHER.

You're not. I used to call that the Sauron building when I'd drive through the area at night. 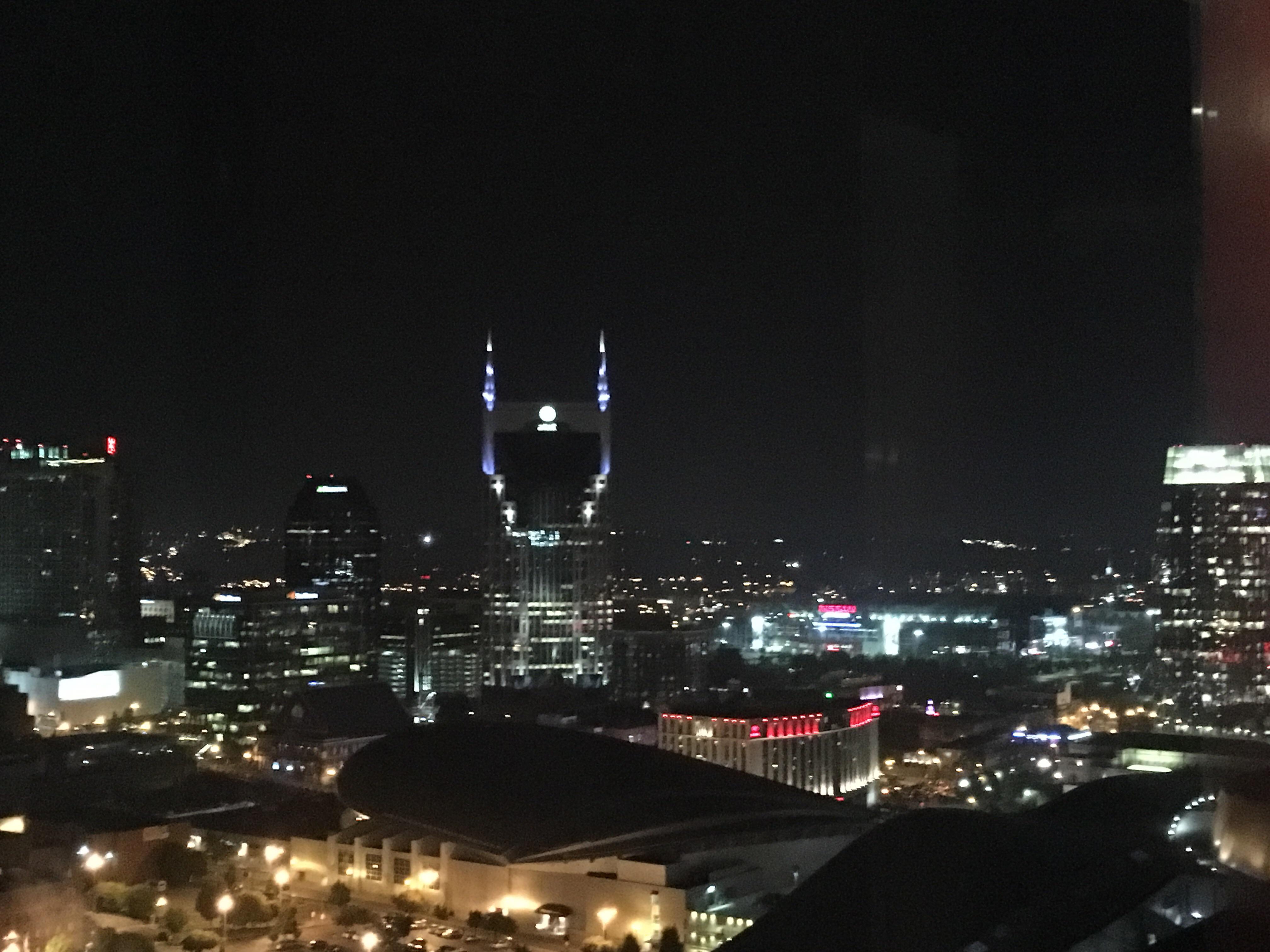 posted on Dec, 25 2020 @ 11:56 AM
link
Was a message to evacuate being broadcast by the RV seconds before the explosion?

posted on Dec, 25 2020 @ 12:02 PM
link
Based on the fact that there was a bogus call regarding shots fired in the area, I'm assuming law enforcement were being deliberately lured into what would become the blast zone.

And then the bomb went off while they were responding and checking out the area, so I don't think there's an issue with the timer going off at the wrong time. Sounds to me like it went off exactly when it was supposed to, assuming it was a timer at all and not set off manually.

sounds to me like it was intentionally done early enough in the morning, that they were trying to minimize civilian casualties while simultaneously target law enforcement.

Consequently I have to conclude it's probably some anti law enforcement / anti-government group or individual.

Which absolutely disgusts me.