originally posted by: Identified
a reply to: LookingAtMars

It could be fake. I posted the link around noon today on page 4 of this thread and I still haven't figured out who gave it to the youtuber I linked nor what camers this came from. But...

It wouldn't be unusual for an explosion to rapidly move the surrounding air and quickly dissipate smoke ahead of it.

It's very weird how it just kind of fades.

Maybe the heat of the blast caused it to fade like that?


If it was something like a missile..I can't see it. Water vapour on the other hand, or smoke from something ejecting, getting sucked back in.
edit on 25-12-2020 by vonclod because: (no reason given)

No. It doesn't look like that at all. We have an RV, we have video of the warning to vacate the area before it exploded. It wasn't an air to ground missile what are you talking about?

And by the way, EVERY data center has an offsite backup in case of disaster, so blowing this place up would be pointless if it was for that reason. This is nonsense.


You're right about the "missile", that's just ridiculous. However this is a conspiracy site.

But pointless? Hardly, it knocked out communication in a very large portion of that area of the country.

AT&T said the affected building is the central office of a telephone exchange, with network equipment in it. The blast interrupted service, but the company declined to say how widespread outages were.

The AT&T outages site showed service issues in middle Tennessee and Kentucky. Several police agencies reported that their 911 systems were down because of the outage, including Knox County, home to Knoxville about 180 miles (290 kilometers) east of Nashville.

AT&T said that it was bringing in portable cell sites and was working with law enforcement to get access to make repairs to its equipment. The company noted that “power is essential to restoring” service.

Nashville explosion: Here is a timeline

6 a.m.: Nashville police respond to reports of shots fired near Second Avenue and Commerce Street in the downtown area. Police said they saw a suspicious vehicle outside a nearby AT&T transmission building.

6:32 a.m.: An explosion occurred along Second Avenue North, The Tennessean reported. Police said it was linked to a recreational vehicle and appeared to be an “intentional act.”

Betsy Williams, who owns the Melting Pot building on Second Avenue, lives in a third-floor loft apartment near the center of the blast, The Tennessean reported. Williams said she left the area after she heard the recording play a countdown to the explosion.

“Evacuate now. There is a bomb. A bomb is in this vehicle and will explode,” Williams told the newspaper she heard from the recording.

At 6:32 Christmas morning, @MNPDNashville and @NashvilleFD responded to the scene of an explosion on 2nd Ave, approximately one block north of Broadway. Metro Police confirm the source of the explosion came from a vehicle.
— Mayor John Cooper (@JohnCooper4Nash) December 25, 2020

6:45 a.m.: Emergency crews shut down streets in the downtown area and federal agents were called to the scene. Emergency crews closed off a 10-block radius around the site of the explosion, WSMV reported. Three people are hospitalized for unspecified injuries, according to the Nashville Fire Department. One officer suffered hearing loss as a result of the explosion, WZTV reported.

Footage from the scene on 2nd Ave North as multiple agencies continue to work and investigate an explosion from earlier this morning. pic.twitter.com/5g40RhwNNl
— Nashville Fire Dept (@NashvilleFD) December 25, 2020

Rest of the timeline at the link.

Well there you go, it's official. It's an AT&T "company office", "CO" or "switch site" (pick your term all means the same thing).

And, that is why various telephone services in the immediate area are impacted.

posted on Dec, 25 2020 @ 09:09 PM
link
Pure speculation, but the big telecom companies are in a massive bidding war right now for control of the airwaves.
Could be a corporate war.
link
edit on 12 by Mandroid7 because: Sp

originally posted by: Mandroid7
Has anyone seen this vid yet?
The plot thickens.
Laser beam right before the explosion.
Check it b4 it's removed from yt.
Watch closely, it's right at the beginning of vid.
@2sec..by 3rd light pole


Could that footage be any crappier?

posted on Dec, 25 2020 @ 09:20 PM
link
Would AT&T benefit from using this explosion to shut down a network rather than switch over to a redundancy?

Say they didn't really lose anything in the explosion other than the ability to get into the building. Would it benefit them to shut down the network and blame the explosion for the outages rather than just switch over?

Maybe an Alias style covert operations to remove files or who knows what from the courthouse?

posted on Dec, 25 2020 @ 09:30 PM
link
a reply to: Identified
Locally, there is no redundancy. This is the building where the wires in your house go to if it's a landline CO. Those wires only go to one place they don't go to two different COs.

If it's a mobile equivalent to a CO, then that might be a little bit different. Because individual cell sites could have connections back to two COs (or MTSOs as they are commonly called in the cellular industry)

Beyond the CO or MTSO there are lines from those locations to various other interconnects with other carriers as well as connections to other CEOs and MTSOs, and no doubt all those connections are redundant.

Thank you for the explanation.

I'm assuming this place would have employees on Christmas Day?
Could the interruption be because the place was evacuated and not because of damage?

Speculation tho if there are water sprinklers or a fire suppression system then I suppose the crystals broke in the blast and that would cause damage...
edit on 25-12-2020 by Identified because: (no reason given)

Minimal staff if it's just a CO. If that location is only a CO and not any other functions, then there's way more equipment in there than there are people.

If they also have call center staff in the same building, then that's a little bit of a different story. Then there might be some more people on site even on Christmas.

AT&T is being tight-lipped about whether the facility does anything besides being a CO, and that's kind of expected. As has been said by others here, telcos are really supposed to be very tight-lipped about such things, exactly because of this type of action.

I remembere when the local mobile carrier I was working for in Los Angeles, built a new data center / call center, we intentionally did not publish anything about it and did not put any markings on the building.

In offices obviously what's at stake is people's lives directly, at data centers and CO's, it's the infrastructure that services the nation. That's kind of why I was surprised to see that locally in my area at some point AT&T got in the habit of putting the giant death Star logo on the sides of the buildings.

edit on 2020-12-25 by EnhancedInterrogator because: Mobile automatic incorrect

Which goes back to my worry this potentially exposed some infrastructure security problems even if that was not the intended purpose.

posted on Dec, 25 2020 @ 09:53 PM
link
a reply to: Identified
also regarding fire suppression, you have to expect them to have something either sprinklers or sprinklers plus FM 200 (The gas that can be used to smother all the oxygen out of the air).

I guess the FM 200 stuff is probably more common in the data center, cuz CO is tend to be older facilities.

posted on Dec, 25 2020 @ 09:58 PM
link
Here in Nashville & have been watching all of the updates since early this morning. Knowing the landscape intimately there were pieces of footage that gave me pause and contributed to some theories. First, every sidewalk basement entry (flat heavy metal) was missing after the explosion. This could have only happened from an explosion originating from beneath. Per the wreckage on the street of 2nd ave & 1st (these are gigantic shotgun buildings) I just can’t imagine that whoever did this didn’t gain access to the sewage system, Nashville’s underground tunnel network (a well documented structure during prohibition), or the basements of these buildings to place additional explosives between the hours of 1:22 (arrival) and 6:30 ( the explosion). That’s 5 hours to accomplish.

According to all reports we are told the RV was producing the warnings and was the source of the explosion. They say they saw it driving and then parked, but never saw anyone exit the vehicle. Could they have parked over a sewage drain or manhole and gained access? Could they have been familiar enough with existing cameras to use the large vehicle as a means to cover them while they gained access to a sidewalk basement entry? Also, there’s a white sedan that is questionable in several videos. From some angles, it actually looks like it explodes. Could bombs have been placed underneath vehicles as well during that 5hours?

So the why...I’ve read several comparisons to IRA tactics in terms of countdowns mainly. Then there’s the Twitter accounts, 1 made by S Mr G in 2014 with no posts, another made last month made by S Mr G with its first post being this morning and providing camera footage of the warning and explosion. Camera footage that I don’t believe anyone had access to until S Mr G posted it. Lastly, 6:30am Christmas Day is Catholic mass. 6:30am was the intentional moment this explosion occurred.

"First, every sidewalk basement entry (flat heavy metal) was missing after the explosion. This could have ONLY happened from an explosion originating from beneath."

edit on 2020-12-25 by EnhancedInterrogator because: Mobile automatic incorrect

(post by Mandroid7 removed for a manners violation)
usaman1983

originally posted by: usaman1983
I wonder if the investigators and police and if they go back to June to see if any connection?


Well it's been mentioned a few times here on in the thread. But until investigators identify the body or who was in possession of the RV, they're not saying. Hasn't been a whole day yet.


originally posted by: LookingAtMars
This does not look good. Maybe not related.

There was an ad taken out in the newspaper saying there would be an attack.

A major Tennessee newspaper said Sunday it is investigating what its editor called a "horrific" full-page advertisement from a religious group that predicts a terrorist attack in Nashville next month. The paid advertisement that appeared in Sunday's editions of The Tennessean addresses the "citizens of Nashville" and warns that the attack would happen on July 18, 2020.

The ad from the group Future For America claims Donald Trump "is the final president of the USA" and features a photo of Trump and Pope Francis. It begins by claiming that a nuclear device would be detonated in Nashville and that the attack would be carried out by unspecific interests of "Islam."

Save those. With how quickly the FBI responded this has all the hallmarks of a distraction or false flag. That story could be scrubbed pretty quickly. It's circulating on chans of some sites going down already.


#UPDATE: NEW up close video of the #nashvilleexplosion 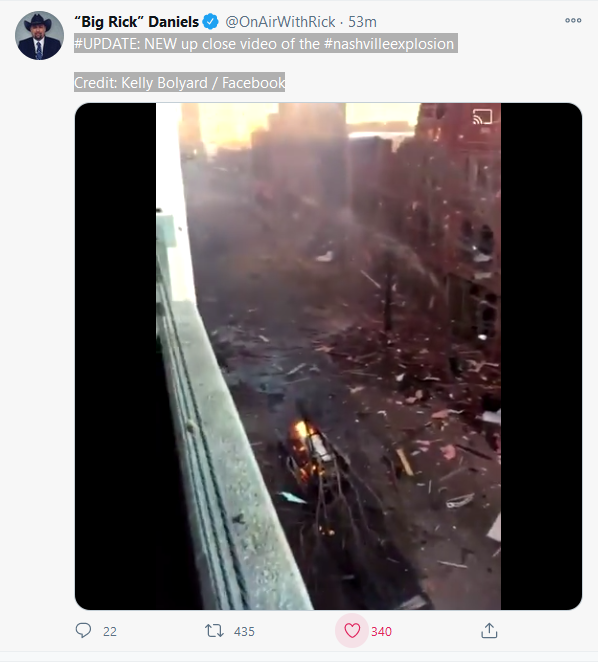