Mark Levin is the s--t

The OP's comment after the link sounds a bit Spammy: "He might have a real treat for you or someone you love."

In which case I apologise for helping to promote it.

originally posted by: daskakik
a reply to: carsforkids
Can you at least post the name of the article from braitbart?


Big Pharma in outrage over Mark Levin's latest business venture-
He fires back with this.

iy isn't spam you guys. It's about big pharma pricing and one man
giving them some competition in at least one acre of their empire.

Searching on braitbart doesn't bring anything up either.

Mods just toss this f&^%$#r in the corner some where please?
Preferably where people traverse frequently. like a hall that
leads to a bathroom that women with high heels use. Stilettos
are nice.

originally posted by: spiritualarchitect
Here in southern California I cannot hear Mark on the radio 870 AM because there is always static interference on his station when he is on. It is happening a lot to that little Jewish boy who is on at the same time 790 AM. I think the lefty Mexicans beaming out of TJ are blotting out the conservatives signals on purpose, so we cannot hear what they are saying. Mexico does not have to follow US radio power rules and so they can get away with this.

I'm sure Mark Levin wouldn't be too happy about that. Send him an email or give him a call. Maybe he will look into it.

What's this? That link has nothing to do with Mark Levin. It's a blog post about drinking water by someone named Tamara.

I think you're just trying to drive traffic to your blog.

The link is to a Breitbart page for craps sake. I'm sorry you're having truoble.

When I follow the link, this is the page that it goes to. Yesterday it did this and today it did the same. Nobody else gets this?

Some posters said they thought OP was spamming but I think it might be malware.

I never spam anything with the subject of my post taking on a
plethora of evil giants? It does have me wondering about this
freak cyber occurrence. Being old school self learned I'm at a
loss. I can still click on and go straight to the page. Is that odd
or what?

Could you just repost the proper link?

Something I try to copy and paste something but for some reason my attempt to copy doesn't work and I paste the previous thing I'd copied. Maybe that is what happened.

No I already did it twice that's why I have this hammer next to
me. So I can fix it if I find out it's my computer messing up
some how. I'm happy to try again NP.


Here it is in the ATS code

And here is the copied URL.

Okay now that's weird. I just tested those two links in this post
and the site it is taking everyone else to. Flashed on my screen
for a split second. But then went to Breitbart.

Here is a screenshot of your post, the copied url says thedecortalk.com. If you are seeing breitbart then there is something going on on your machine. 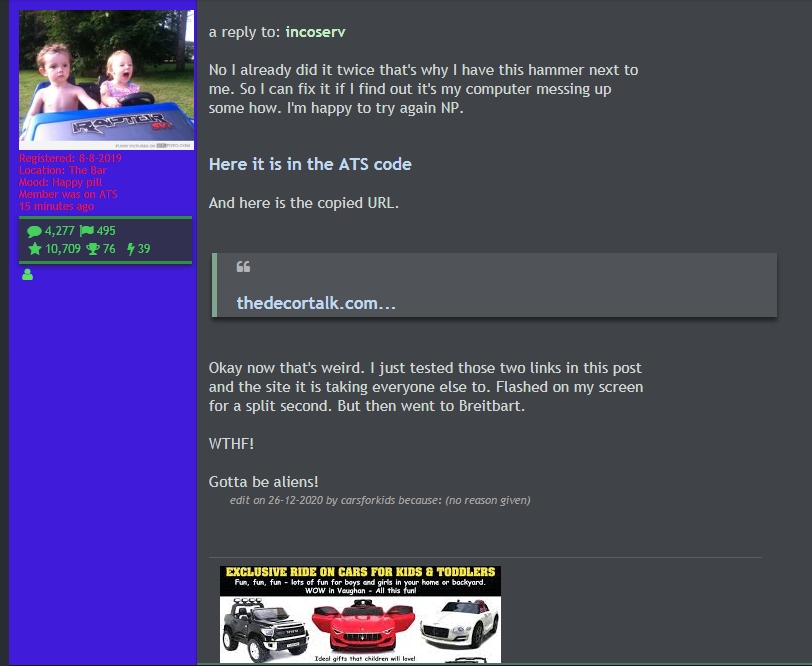 You want me to use the hammer don't ya?
But wait a minute my machine is the only one that
goes to the right page! I don't understand this because
I've been linking to other sites since that one just fine.

Maybe paste the address without the ATS url and some spaces so that it shows up as plain text?

Now I put the two spaces on the top line of the url.

Here I can quote it for ya's at least.


BIG PHARMA IN OUTRAGE OVER MARK LEVIN'S LATEST BUSINESS VENTURE - HE FIRES BACK WITH THIS!

(Breitbart) - In an insightful 1-on-1 interview, one of the world’s most followed political commentators reveals how he wouldnt be here without CBD.

Gifted lawyer, author, radio personality and business genius Mark Levin made headlines after revealing his new CBD line on Live TV last week. Pharmaceutical companies were outraged saying they will be filing a lawsuit against Levin and his partners for violating their contract and undercutting their prices. He responded with this:

"When I started this whole thing back in 2015, it really was just a part time passion project and a way for me to give back. After being given so much, I figured there was no better time to make Ceremony CBD Oil available to everyone, as it can help thousands of people experience life pain-free and live much happier lives."

His product, Ceremony CBD Oil, has been flying off the shelves within minutes and Levin says his number one struggle as CEO is being able to keep up with demand. His CBD wellness line is 90% cheaper and five times more effective than those being offered by Bayer and other Big Pharma companies.

Bayer and Purdue Pharma were furious after seeing a massive dip in their sales, calling for Levin to be indicted, saying: "We're happy Mr. Levin found something to replace prescriptions, but his announcement was a direct breach of contract. His network should fire him immediately and he should formally apologize."

Mark Levin appeared on Live TV again the next day, not to apologize, but to offer viewers free samples


“I’m not going to let these companies intimidate me,” Levin fired back during his appearance. “Our product, Ceremony CBD Oil, has helped me my family not just cope with our what ails us but to thrive! I am so confident in it that I’m offering free samples to everyone. Ceremony CBD Oil is the product of thousands of hours of research and development. I wouldn’t talk about something on air I don’t believe in and give to my family.”

Levin eventually admitted that big pharma companies are furious with him after noticing a large decline in sales since Ceremony CBD Oil was launched on the market.

“Users of Ceremony CBD Oil are experiencing results that before now were only possible through prescription medication. It’s obviously a much cheaper, and safer alternative and because of that pharmaceutical companies are finding it harder to keep patients using their prescriptions.”

His words coupled with online reports of amazing results got us curious about Ceremony CBD Oil so we did some research — here’s what we found.

IS CEREMONY CBD OIL RIGHT FOR YOU?
The short answer is Yes.

Ceremony CBD Oil has been found to have a positive impact on key body functions including - neurological, physical, and psychological.

This Includes but is not limited to:

While making an appearance on Live TV, Levin gifted the cast and crew with CBD products and made sure every guest was given a sample of the life changing supplement. Since then, he has cultivated a huge celebrity clientele who are regularly reordering the products. See for yourself!


IDK if this will fly with mods or not but I did try to have the thread scrubbed.
edit on 26-12-2020 by carsforkids because: (no reason given)

Thanks for your fruitless patience .

posted on Dec, 26 2020 @ 06:59 PM
link
a reply to: carsforkids
Looks like a scam of sorts. These links have the same story just subbing different famous peoples names doing the firing back like Steven Tyler, Wayne Gretzky and the Lagina Brothers

originally posted by: daskakik
a reply to: carsforkids
Looks like a scam of sorts. These links have the same story just subbing different famous peoples names doing the firing back like Steven Tyler, Wayne Gretzky and the Lagina Brothers

So no hammer? Thank you Das for your patience where I obviously have very little.
And for your help. Much appreciated.

posted on Dec, 26 2020 @ 09:15 PM
link
a reply to: carsforkids
I remember when the Queen of England banned Mark Levin from the country, and he thanked her for it!


I remember when the Queen of England banned Mark Levin from the country, and he thanked her for it!

I never heard that before! But that is all Mark Levin big time. LMAO