posted on Dec, 23 2020 @ 07:38 AM
link
One of the things which always fascinated me about the TV series The Walking Dead was the zombie characters. If you ever looked closely some of the zombie costumes and makeup would have you scratching your head wondering how they did that. Here's some interesting, but completely useless trivia...

Did you know there were three (3) different kinds of zombies used in the filming of the hit TV show The Walking Dead?


"Heroes" were the ones you saw up close, and some of their makeup was fantastic. It took several hours to do and was extensive

"Midgrounders" had makeup, but it was mainly shadows and coloring (along with clothing of course)

"Deep Backgrounders" wore little makeup at all, usually just a mask and tattered clothing. You never saw closeups of these zombies.

Completely useless trivia, I know, but I thought this little factoid was interesting.


Movies use things like mat paintings in the background with surprisingly little detail to achieve the correct atmosphere so it makes sense.
Miniatures also.

posted on Dec, 23 2020 @ 08:09 AM
link
I was shocked to learn that Greg Nicotero had worked with George Romero and Tom Savini, which should have been obvious based off of his work on TWD.

Every episode became the exact same and it was a waste of time.

posted on Dec, 23 2020 @ 09:52 AM
link
Is there any explaniation as to why the zombies lasted longer than a year or so? Logically they would have finished off the easy people quickly and the rest only had to wait for them to starve or rot away. Any zomby outbreak is self defeating within a year and a half or less.

I've always found it best to not over think the details.
Like in movies where aliens invade earth for its resources.. They travel light years for water which is readily available all over the universe.

The zombie thing never caught my attention either.

posted on Dec, 23 2020 @ 10:22 AM
link
a reply to: Bluntone22
Or Jurassic Park.
When the T-Rex first approaches, we hear every ground shaking, thunderous footstep and even see ripples in the glass of water.... A grand entrance, indeed..

Later, it sneaks up on them in total silence.


I made it most of the way through season 8 before I had to quit. When they veered radically away from the storyline of the comic I was out. Plus the direction they were going was completely incoherent then. I have no idea WTH they were thinking!

Carl dies - Major deviation (unrecoverable)
Carol WON'T die!- She should have been dead 1,000 episodes ago, and she...just...won't...DIE!

That was the great thing about TWD, it was never really about zombies. Zombies were just a metaphor for society. It dealt with every social ailment we face in modern society. It dealt with societal collapse, it dealt with minorities and racism, it dealt with crime, and murder and survival. It dealt with every taboo there is. It dealt with issues which were so politically incorrect they would never be shown in a movie and certainly not on television! Zombies were the perfect metaphor because nobody would get all butt-hurt when those issues came up; they were just zombies so no one cared. That, and the situation was so dire that you either lived or died, and nobody was better than anyone else. The perceived elites proved to be just as mortal as everyone else.

At least up until season 8. After that they tried to go all dramatic with it. Spoiled the whole series.

I made it two episodes and quit.
When the wife was sleeping with a new guy I turned it off.

Even if she knew her husband was dead, she didn't, she wasn't exactly grieving his death.

Hey man, T-Daddy knew how to tip-toe too ya' know!!

The wife hated Lori too. But she got what was coming to her...killed by her own son.

posted on Dec, 23 2020 @ 01:42 PM
link
a reply to: Flyingclaydisk
I know that's a possibility.
I've watched it a few times now and, don't tell the others but im starting to think that those aren't real dinosaurs.

I wish that they had varying degrees of zombie sounds as well.

If you listen carefully you'll notice that in alot of zombie media the undead all sound similar.

Imagine a swarm of zombies with some deep sorrowful moans thrown into the crowd.

That would definitely up the creepy factor.

Here's some Zombie trivia I found interesting yet strangely amusing given our present situation...

Gen. Glen D. VanHerck nominated by Trump who as of this past August is now the Commander of North American Aerospace (NORAD), Northcom, and the obscure COG. Gen VanHerck was leading these mock zombie apocalypse exercises in 2013 on several Air Force bases. An Op on how to stop hordes of people from getting into Cheyenne Mountain. Gen. VanHerck is also connected to the Roswell incident in strange kinda way regarding the 509th Bomb wing. 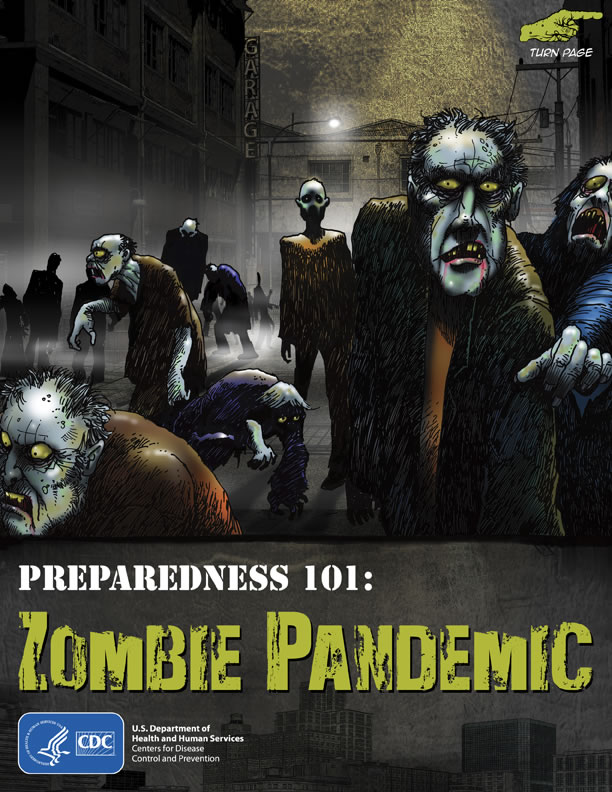 Page thru the illustrated CDC Zombie Pandemic novel - Eerily prescient about events in 2020.

Or worse. Have the occasional zombie show flashes of humanity. As if they remember they used to be a living being and as they moved in for the kill they remembered who they were for a moment and let their victim go.

Or walk up to a live one and beg to be put down. Killll mmee Please! Raaaa!!!

That reminds me of the first 2 runs of marvel zombies.

What was cool about that story was the longer the zombies went without eating flesh the more they reverted back to their old selves.

The hunger would fade like an addiction and they'd have all their mental facilities but were still undead.

But if they ever tasted living meat once more, the monster inside would reawaken.

A Hangry Hulk ruined their best chance at salvation.

... They travel light years for water which is readily available all over the universe.
...

They might want liquid water instead of ice, who knows. Liquid water has only been confirmed to exist on earth.

Plenty of speculations about the presence of liquid water on other planets though.
edit on 7-2-2021 by whereislogic because: (no reason given)

originally posted by: Flyingclaydisk
a reply to: PurpleFox
...
Carol WON'T die!- She should have been dead 1,000 episodes ago, and she...just...won't...DIE!


The short-haired 'Strong Woman'-armor is one of the strongest plot armors around in today's 'promoting wokeness' environment. Add some kills of dominant stronger men and that armor gets thicker and thicker (an extra layer of 'female badass'-armor, they love showing women killing or generally kicking ass, the more violent and gory, the better, the 'excessively violent badass' character itself is already very popular amongst the audience, as can be seen by the popularity of characters like Negan, Daryl, Rick, or Billy Butcher in The Boys, Amos in the Expanse). With her 'Ellen DeGeneres'-look, she already fares well in the LGBTQ section of the market/audience, but if they'd make her an actual lesbian or bisexual, she'd be totally invincible; like Althea from FTWD.

I like how the show The Boys shows how it works with the marketing of superheroes. What I don't like is when they do it themselves in their own show after just condemning it in their writings by making fun of the behaviour or exposing some hypocritical aspect of it (such as the point about sexual exploitation with the dress and how that affects young girls that are fans, and subsequently, they have Starlight running around in that dress for the majority of the show, making sure to get the right camera angles to obey the mantra in entertainment: 'sex sells'. Whereas the same can be said about bloody violence by the way, as the phrase goes in the news entertainment media: 'if it bleeds, it leads'). In that sense, Starship Troopers does it much better, you don't get the switch from showing the marketing/propaganda tricks by means of exaggeration, to a more subtle use of the same tricks where they don't exaggerate to make the point that their audience* is being played in the same manner. (*: the audience of the show, not the audience in the show that they're already showing as being played by marketing/propaganda tricks and rules of acquisition, Ferengi-style)

Personally, I don't like modern shows at all, I just fast forward through them, I prefer shows where they don't put so much emphasis on scoring cheap points with excessive depiction of bloody violence and gore (sometimes it's just a fistfight, and they make it extra gory or violent for shock value and catering to an audience already conditioned to want to see these sort of scenes), or revolve around the 'sex sells' mantra. Also modern shows seem much more targeted at women or so-called progressives. I prefer the older shows, mostly Sci-Fi:

1. Stargate SG-1
2. Stargate Atlantis
3. Babylon 5
4. Star Trek DS9
5. Blackadder. His sarcasm is my absolute favorite form of humor, especially starting with season 2 and onwards, where Rowan Atkinson recognized that was the most popular aspect of his Blackadder character; but I'm also a big fan of history, and I loved the ideological historical points being made:


This scene always reminds me of those heavily affected by scientism and those philosophers posing as scientists marketing their philosophical pseudoscience under the marketinglabel "science", and exaggerating the value of their research and publications because of the phenomena in the sciences described by the phrase 'publish or perish'; and those falling for these tricks and actually think these people are making groundbreaking discoveries or are talking about those (Neil deGrasse Tyson, Stephen Hawking, Lawrence Krauss, Bill Nye, Michio Kaku, Richard Dawkins, Jack Szostak with his glorified soap bubbles that he calls "protocells", euhm, excuse me, 'it's green', they're glorified soap bubbles, not cells in any sense of the word, proto- or otherwise):

And this scene often reminds me of the behaviour of those debating various subjects on ATS but are unwilling to acknowledge certain inconvenient facts and use some form of agnosticism or agnostically motivated code feigning both humility and ignorance in the process to avoid having to acknowledge these inconvenient facts/certainties/realities/truths, or that they are well-established or the evidence for them (including that this evidence is conclusive when it is):

It happens a lot on the Origins & Creationism, Religion & Theology and Philosophy and Metaphysics forums.
edit on 7-2-2021 by whereislogic because: (no reason given)

I had towatch the season where Neagan killed off the good characters because I thought he woukd be dead, nope MF lived. The show went to crap after that season. I don't even watch it anymore.