evidence that spices, fruits from Asia had reached the Mediterranean earlier than thought

A market in the city of Megiddo in the Levant 3700 years ago: The market traders are hawking not only wheat, millet or dates, which grow throughout the region, but also carafes of sesame oil and bowls of a bright yellow spice that has recently appeared among their wares. This is how Philipp Stockhammer imagines the bustle of the Bronze Age market in the eastern Mediterranean. Working with an international team to analyze food residues in tooth tartar, the LMU archaeologist has found evidence that people in the Levant were already eating turmeric, bananas and even soy in the Bronze and Early Iron Ages. "Exotic spices, fruits and oils from Asia had thus reached the Mediterranean several centuries, in some cases even millennia, earlier than had been previously thought," says Stockhammer. "This is the earliest direct evidence to date of turmeric, banana and soy outside of South and East Asia." It is also direct evidence that as early as the second millennium BCE there was already a flourishing long-distance trade in exotic fruits, spices and oils, which is believed to have connected South Asia and the Levant via Mesopotamia or Egypt. While substantial trade across these regions is amply documented later on, tracing the roots of this nascent globalization has proved to be a stubborn problem. The findings of this study confirm that long-distance trade in culinary goods has connected these distant societies since at least the Bronze Age. People obviously had a great interest in exotic foods from very early on.

Two additional protein findings are particularly remarkable, explains Stockhammer. In one individual's dental calculus from Megiddo, turmeric and soy proteins were found, while in another individual from Tel Erani banana proteins were identified. All three foods are likely to have reached the Levant via South Asia. Bananas were originally domesticated in Southeast Asia, where they had been used since the 5th millennium BCE, and they arrived in West Africa 4000 years later, but little is known about their intervening trade or use. "Our analyses thus provide crucial information on the spread of the banana around the world. No archaeological or written evidence had previously suggested such an early spread into the Mediterranean region," says Stockhammer, although the sudden appearance of banana in West Africa just a few centuries later has hinted that such a trade might have existed. "I find it spectacular that food was exchanged over long distances at such an early point in history."

posted on Dec, 23 2020 @ 07:34 AM
link
a reply to: TheAlleghenyGentleman
These things escape being recorded because of the absence of writing. People just do the journey and make the exchange.

Professor Stockhammer's team examined 16 individuals from excavations at Megiddo and Tel Erani, both in what is now Israel. The region in the southern Levant served as an important bridge between the Mediterranean, Asia and Egypt in the 2nd millennium BC. The aim of the research was to investigate the diet of Bronze Age Levantine people by analysing traces of food remnants, including ancient proteins and plant microfossils, that were preserved in human dental calculus over thousands of years. The human mouth is full of bacteria, which continually petrify and form tartar and this can trap tiny food particles. Analytical techniques allow researchers to look at these particles inside the tartar, which is also called calculus. 'This enables us to find traces of what a person ate,' Professor Stockhammer explains. 'Anyone who does not practice good dental hygiene will still be telling us archaeologists what they have been eating thousands of years from now.' 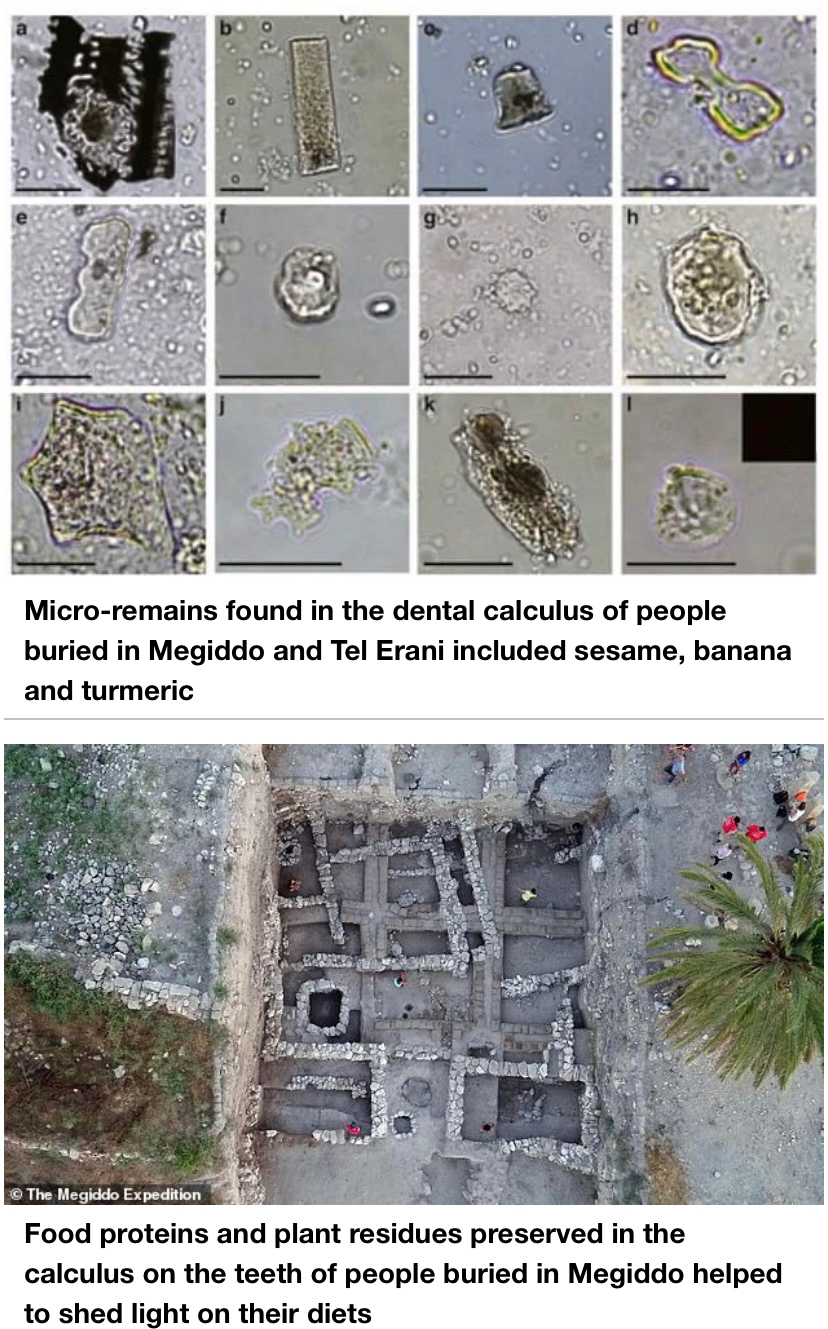 edit on 23-12-2020 by TheAlleghenyGentleman because: (no reason given)