They're both forced to wear masks under threat of punishment.

Because, going on near 20 years ago now, the CIA 'enhanced interrogation' experts learned, forcing someone to wear a surgical mask is an effective method to increase someone's discomfort while undergoing torture.

Most people are probably familiar with this image to the right. It is a photograph taken at Camp X-Ray in Guantanamo Bay, Cuba, January, 2002. You might even be familiar with the caption that often accompanies this photo. 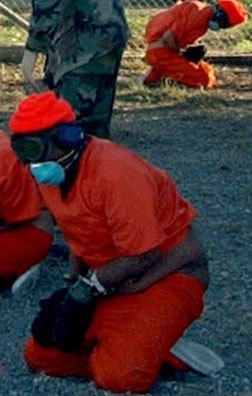 Detainees in orange jumpsuits sit in a holding area under the watchful eyes of Military Police at Camp X-Ray Januaryt 11, 2001 [sic] at Naval Base Guantanamo Bay, Cuba, during in-processing to the temporary detention. The detainees will be given a basic physical exam by a doctor, to include a chest x-ray and blood samples drawn to assess their health, the military said. The U.S. Department of Defense released the photo January 18, 2002.


Let’s come in a little closer to get a better idea of what we’re looking at. Perhaps the first thing to note is that this detainee in the foreground, like all the others around him, is goggled and is wearing noise-blocking earmuffs. And yes, his hands are bound, but even more to the point, he is wearing thick mittens, limiting his sense of touch. The surgical masks make breathing more difficult and limit the sense of smell.

Time published a report containing excerpts of the interrogation logs, which revealed that Qahtani was forced to strip naked, told to bark like a dog, deprived of the opportunity to use a toilet after having been force-fed liquids intravenously, ordered to dance with a mask on his face

GUANTANAMO BAY NAVAL BASE, Cuba — A group of men in orange jumpsuits are kneeling. Their hands are shackled and their mouths are covered with light blue surgical masks. Military guards stand watch.

A Red Cross spokesman told the media, however, that the United States had contravened the Geneva Conventions by releasing photos that showed the men kneeling shackled and blindfolded, wearing surgical masks and earmuffs.

Taken by itself, sure one could argue

'But it's not the same, nobody's being tortured'

Is Isolation a Form of Torture? U.N. Expert Says It Is

A lengthy solitary confinement can cause serious mental and physical damage and be considered torture, according to Juan Mendez, the United Nations rapporteur (investigator) into torture.

Forced face coverings and social isolation are both recognized forms of toture.

And let's not forget 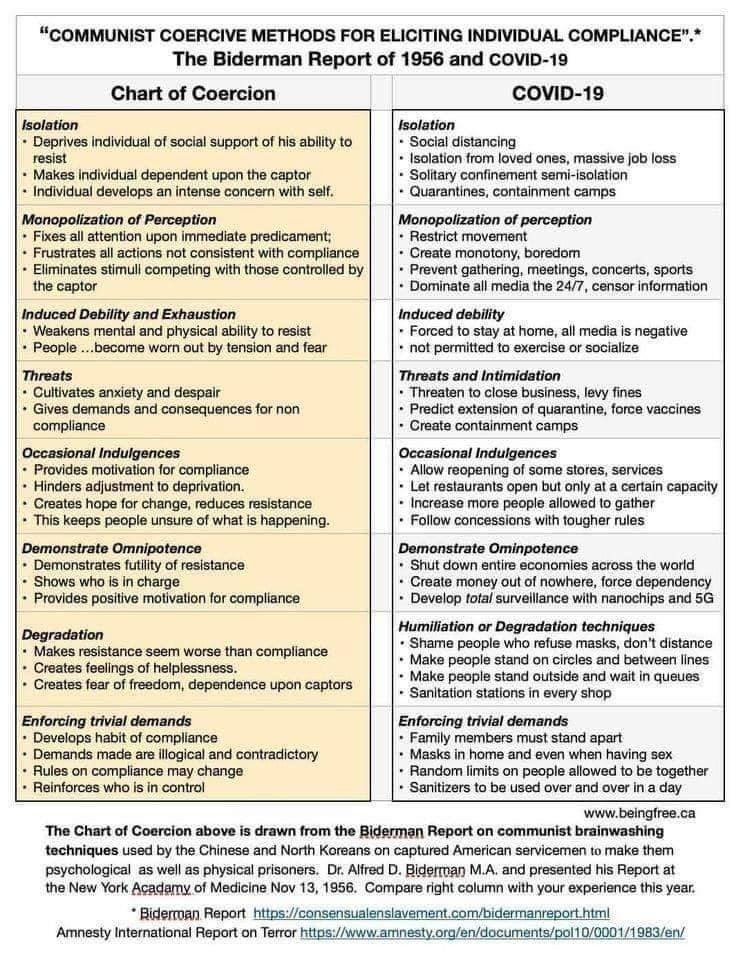 As a little slightly related addendum

The Mask of Infamy.

The mask of infamy brings about two different inflictions: a spiritual one and a physical one.

The victims were both staked out to public ridicule...The mask with long ears represented a silly ass person, while the one with a snout or with a pig face symbolizes the animal being considered dirty.

Just wanted to throw that in to finish with, masks as a form of torture are nothing new. That's just one example from history. Go look some more into it. Humans forcing other humans to cover their faces has been a regular part of torture and oppression for a long, long time.

I'm not sure...i could see it being a slip up by the government accidently admitting guantanamo bay was running longer than they said. The red cross report is from january 2002 so maybe the caption has a mistake? They do have a [sic] in front showing that it's a requoted mistake.
edit on 17/12/2020 by dug88 because: (no reason given)

I could see them being used for the purpose discussed but they still have the information wrong.

We are being muzzled!


I see daily now in my work environment childs with mask, on age of kindercarden and school.....so this new normal likes to get get tiny kids wear the mask, and they are being taught that wearing mask is normal.

That was one of the reasons he was supposedly elected.

I worked a lot of construction in rain with dust masks on to know it's hard to breathe.

But it's hard to prove it's being used for torture.

posted on Dec, 18 2020 @ 06:14 AM
link
Yup, TPTB are pretty pissed off at all the Pesky Patriots around the World, wanting to be Free and challenging their vision of the future. We called for the Globalist Traitors to be locked up and this is our “ punishment “ !

They also had to wear adult diaper and hand cuffs, so they had something in common with skat and bondage fans as well.

Lets stop with the ridiculous comparisons, it's beneath this website to keep drawing false equivalents.

posted on Dec, 18 2020 @ 07:13 AM
link
a reply to: dug88
Just to play devils advocate for a moment-I imagine the reason the captors would give for the prisoners wearing masks would be to stop them from spitting at the guards.
Our cops will do that-make people wear a "spit hood" if they start spitting.

That said,the "communist coercive methods"chart does seem ominous to say the least when compared to the covid lockdown rules.

Sure the virus is real and can kill the vunerable,but does that warrant turning the planet into an open air prison,where neighbours snitch on each other for "rule breaking"and the fabric of society breaks down?

I would say No it does not.
Its obviously being used to re build society into a high tech open air dystopian prison system by the same people who have tried to use every crisis to do the same.

The difference is,this time it sems to be working.

Yeah let’s pretend it isn’t the equivalent of putting up a chicken wire fence to keep mosquitoes out. Or that it isn’t one big pay-op and social engineering.

posted on Dec, 18 2020 @ 11:10 AM
link
When you hear hoof-beats thin of horses not zebras. The most likely reason for the masks is to prevent detainees from spitting on staff or being able to put anything in their mouths. Yes, they're handcuffed but they could still face-plant and suck dirt in to suffocate themselves. Face it, if they really wanted to torture these people they certainly wouldn't be using paper face masks.

originally posted by: jtma508
When you hear hoof-beats thin of horses not zebras. The most likely reason for the masks is to prevent detainees from spitting on staff or being able to put anything in their mouths. Yes, they're handcuffed but they could still face-plant and suck dirt in to suffocate themselves. Face it, if they really wanted to torture these people they certainly wouldn't be using paper face masks.

It's painful to watch these people twist everything they can to find another thing (or just lie outright) to cry about & claim victimhood.
It's just so hard! 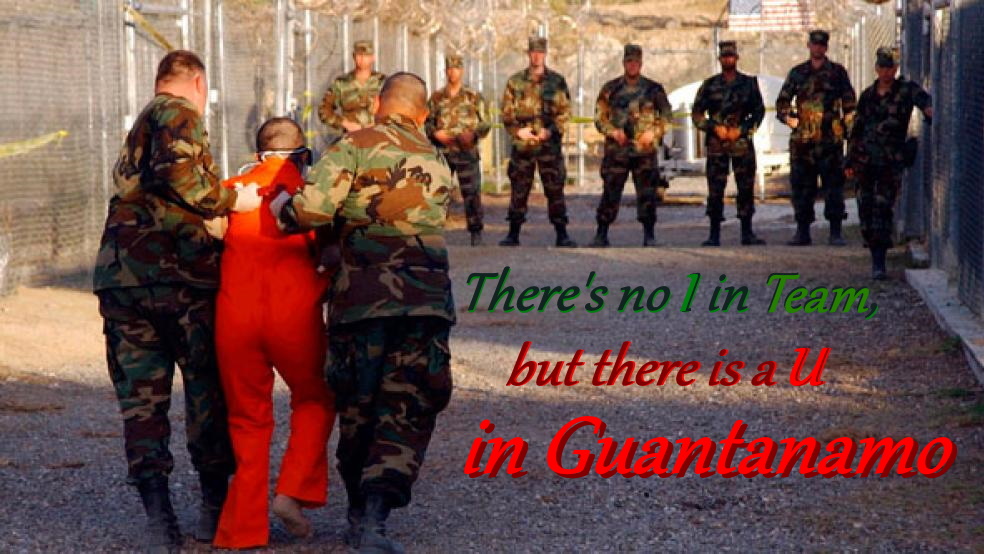 posted on Dec, 19 2020 @ 09:12 AM
link
Man's inhumanity to man has been well documented through the ages. It's part of the human condition, the dark side that Dick Cheney was so fond of.

posted on Dec, 19 2020 @ 12:15 PM
link
I wonder if medical staff that wear masks everyday for hours on end feel tortured too. The story says they were being processed, so yes until they are medically clear they wear masks as who knows what diseases they have. The earmuffs and goggles is to force true isolation from one another. They are not used as torture, but are psychological in nature....