The evidence comes out quickly. There are hundreds of whistleblowers and thousands of pages of documentation.

The problem is the judicial system not being willing to look at it. They are either lazy or compromised... or both.


I'm not ready to go down the path of systemic fraud across massive Goverment levels to include the judicial system. No matter how much evidence you think is out there it is just not enough...yet, sorry to say...

A theory requires some evidence. Not pure speculation.

Is it true that the supreme court is now going to hear the MI & GA case?
I see it is on their docket, but I don't know enough to know if that means they are actually going to hear it?

There are two more waiting to be docketed. Wisconsin and Pennsylvania.

If what you are seeing are cases brought by Sidney Powell, they are the Big Texas case repackaged and split...with each state having plaintiff's with "standing".

The only reason the Big Texas case and all of its supporters were turned away from the Supreme Court last week, was due to a lack of standing.

2020 hasn't been proven to be about mass fraud, said for the 101st time now. You speak of possibilities, rumors, hopes and dreams...I speak of courts and decisions, ballots cast legally under the laws of each state.

Would you have said that Nov 4th too? It has been looked into and you are right no mass fraud was found, so we move on...I'm not speaking of anything...just pointing out a fact that it was within Trump's Constitutional right to investigate like it was with Gore... Now with his Tweets...do you think anyone really cares? Are they any different than what we have seen in the last 4 years... Will this be another Trump ho-hum moment or do you see it ripping the fabric of time apart...lol

I called Biden's win a landslide because that is what, with the same electoral college tally in 2016, Trump called his win. And in this case Biden got around 8 million more of the popular vote, so...I'd call it a landslide - by Trump standards if no one elses.

Whatever...don't care call it what you want.... If the Dems do not take GA they still lost big time and 2022 will be no better, so whatever point you are trying to make is moot, or did you just admit you just pulled a Trump stunt of inflating the facts... good job...

No I wouldn't have said it Nov. 4th. And yes, even regardless of the Georgia outcome the Republicans did really well this cycle, picked up 14 seats in the house I believe? Many governorships. Just not the Presidency. Honestly I don't know why the Right is so angry. I'd agree the dems lost pretty bad, except at the very top of the ticket. Really conservatism won, it's just Trumpism that lost.

But, yeah, some people definitely care about the tweets. For sure. Lol.


originally posted by: xuenchen
Peter Navarro (a White House Trade Adviser and economic PhD) has written a report on how the Democrats did it !!

Massive cheating and all being covered up by the MSM !! 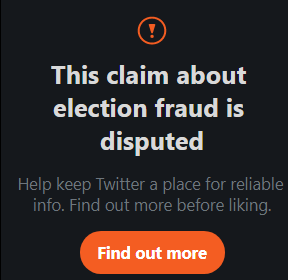 Twitter is changing back to the old system now that the changes have served their purpose.

Twitter is one of the companies that could be financially punished for interfering in the November election.

Look what the US state department and US Treasury did today...

The United States has begun leveling sanctions against companies involved in election interference in Venezuela.

Could domestic U.S. targets be next?

It is likely the federal government knows more about election interference here at home, than they do about what happened in Venezuela.

I will when that report is put in front of a court and found factual.

There are two more waiting to be docketed. Wisconsin and Pennsylvania.

If what you are seeing are cases brought by Sidney Powell, they are the Big Texas case repackaged and split...with each state having plaintiff's with "standing".

The only reason the Big Texas case and all of its supporters were turned away from the Supreme Court last week, was due to a lack of standing.

I think they used that excuse to cover their own cowardice.
I suppose we will see soon if they do the right thing or not.

posted on Dec, 18 2020 @ 11:51 PM
link
Common folks. I love this site, but the MAGA-in-mourning business is just getting ridiculous.
Save yourselves some embarrassment, roll in a pile of extra-strength butt-hurt cream, and get on with life.
These inane threads about the steal and fuh-RAWD
are sounding worse than all the left-wing crying that you guys made fun of in 2016. Full-on wingnut meltdown mode here. Sad and kind of funny at the same time.

posted on Dec, 19 2020 @ 06:31 AM
link
You know how the post office says don’t mail cash, because it’s not secure? But ballots, iron fortress of impenetrability.

posted on Dec, 19 2020 @ 06:33 AM
link
That’s why you were so actively telling everyone GET OVER IT in 2016. You guys divided the nation in 2016 by not accepting a damn thing and being indignant for the past 4 years. Surprised we do t trust you? Look at how you speak to us. Elitist telling us to take the butt hurt.

Call us “common folk” says a lot about how you think of yourself, Freud.

a reply to: Gandalf77

The Cybersecurity and Infrastructure Security Agency (CISA) issued an emergency directive on the evening of December 13, 2020 in response to a massive data breach due to a critical software vulnerability that impacted several federal agencies. Agencies were instructed to shut off the Solarwinds Orion software, which hackers used to compromise federal email accounts. The software is used to monitor and manage IT infrastructure in a large-scale environment. Government officials suspect the hackers responsible are a part of a Russian government intelligence unit called “Cozy Bear,” who also infiltrated the Democratic National Committee in 2016. CISA’s emergency directive instructed all agencies using the Orion software to disconnect the software by noon on Monday. Agencies were then required to submit a report to CISA to ensure they had followed the protocol. The directive states, “Until such time as CISA directs affected entities to rebuild the Windows operating system and reinstall the SolarWinds software package, agencies are prohibited from (re)joining the Windows host OS to the enterprise domain.” SolarWinds, in a December 14 filing to the Securities and Exchange Commission, said fewer than 18,000 customers were impacted by this breach, and the company provided 33,000 customers with information on how to mitigate potential damage on their website. The Departments of Treasury and Commerce were affected by this data hack. The extent of the breach at other agencies is still being investigated. CISA is currently without a permanent director. Former CISA Director Chris Krebs, who was fired in November for disputing election fraud claims, tweeted after news of the hack, “Immediately activate your incident response team. Odds are you're not affected, as this may be a resource intensive hack. Focus on your Crown Jewels. You can manage this.” The 2021 National Defense Authorization Act (NDAA) reestablishes the position of National Cybersecurity Director in the White House and places a significant focus on improving cyber security. While the full scope of the breach is still being assessed, email accounts may have been compromised as early as June 2020. Sue Gordon, a former top deputy in the Office of the Director of National Intelligence, said of the breach, “It is massively disruptive once you have long-term penetration by a nation-state.”

The whole country has been over run 😧

It will not come as a surprise to many, but chief justice John Roberts is participating in the election steal.


Roberts showed his true colors in the Obamacare fiasco by offering pure sophistry in the decision.

originally posted by: Rob808
That’s why you were so actively telling everyone GET OVER IT in 2016. You guys divided the nation in 2016 by not accepting a damn thing and being indignant for the past 4 years. Surprised we do t trust you? Look at how you speak to us. Elitist telling us to take the butt hurt.

Call us “common folk” says a lot about how you think of yourself, Freud.

a reply to: Gandalf77


I didn’t vote for Shrillary, and I absolutely accepted the outcome of the 2016 election. Trump’s campaign saw opportunity in the so-called blue wall and exploited it. He won by a razor-thin margin in places, but he did win. I never argued otherwise.
Plenty of folks on the left were melting down about it, and plenty of folks on the right were going on about the butt-hurt snowflakes.
What I’m saying is that the right may need to take a little bit of its own medicine, accept that Trump lost fair and square, & quit making up absurd lies and fan fiction.


originally posted by: Phage
Once something happens, probabilities become irrelevant.

All of a sudden extremely low human error while having a 50%+ increase in mail in ballots is not a flip of the coin luck...lol
That typically means ballots were not checked as close as they were in the past, or errors were simply ignored. It was like 6% in 2016 and now .2%?

Dude, you can't go back and forth with Phage. I've been a long time lurker and remember his posts from years ago. It seems he must have been hit in the head and lost some brain cells and common sense. I actually used to look forward to when he posted in other threads/topics.


It is things like this that will trigger the military option, the suspension of habeas corpus and military tribunals. It needs to happen or America is finished forever.

You would destroy America in order to save it.

You would destroy America in order to save it.

As usual, you have it completely bass-ackwards.

It is the acceptance of lawless, rigged elections by people like you when it soothes your raging irrational TDS that will destroy America.

Do you honestly believe that the military would obey unlawful orders by Trump? The Insurrection Act is a long standing Statute. Invoking it to arrest and try seditious, treasonous, traitorous rat bastards is well within the purview of said law.

What I can say is, if he doesn't have the goods - meaning, indisputable proof that can be understood by anyone with more than two brain cells to rub together - then he shouldn't invoke it, and if he did, and didn't provide such proof to the military, then they would be well within their rights to refuse an unlawful order.