Has anyone considered that maybe Trump didn’t want to win?

I don't think so. I have been seeing this idea around other sites, and I am really thinking its a idea that a group (unknown) is trying to plant in peoples mind.

Again it's about perspective.
$250 million isn't really that much money to men like trump. He plays monopoly with real buildings.

Tesla would love to have only lost that much in a year... And everything thinks musk is great.

The fact that he plays monopoly with real buildings is distasteful in itself.

Tell you one thing, he's not getting $200 for passing go this time around, and i don't think he has a get out of jail card left to play.

As to "haters gonna hate" well with good reason given the last 4 years.

Lol... Best president of your lifetime.

That's rather presumptions, I'm not that old yet.

Might be best to see what history has to say about the fellow a few decades down the line before coming away with such nonsensical statements, Yosemite.

Two ways to look at this one.

1) True beyond all doubt.
2) Biden would just set it on fire before walking away.

Given the media and impeachment nonsense, I think held up pretty well until the sham of an election. Hasn’t flipped the board and thrown the bank around the room yet, though. So maybe not that bad after all.

And maybe Joe wouldn’t set it on fire, but I wouldn’t put it past him to prove why he needs Depends. 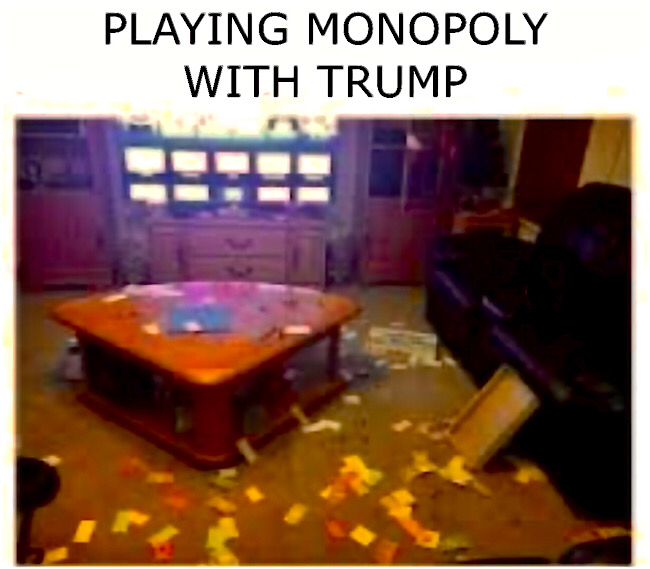 Trump is probably saying "screw it"...
The American people are going to suffer the consequences of sleepy Joe and heels up Harris.

Trump and his family will be just fine in their mansions.

Well, let's see Trump ride a bike or play with a dog?

Animals ken the score, it would bite the hand off him sharpish i imagine.

And that's how we are going to beat China.

On a lighter note, it's Trump that's been beaten like a drum in the real world.

Look at your boy Phillip Green, how many peeps gonna go hungry after dude mismanaged his holdings? But he is still rich....and a Lord.

posted on Dec, 15 2020 @ 10:11 AM
link
I can't believe that after all the Dems and media put Trump through that he would even want to run the second term. Maybe he didn't really want to win, maybe this was his last ditch effort to stop fraud in elections. But it didn't work, the big swamp creatures have gotten stronger when he drained the small creatures out that were hindering their growth.

I don't even recall his mother. LoL

Turned 4 years into a loss as well so there's that.

It's gone from "he's going to win" to " wah wah wah the other boy cheated" to " yeah well he didn't want to be president anymore anyways, he lost on purpose......"

I don't think so. I have been seeing this idea around other sites, and I am really thinking its a idea that a group (unknown) is trying to plant in peoples mind.

Never read/heard this from another site. It is just my own observation on how things work sometimes.
Just like I do not believe the Queen of England dislikes Meghan or Harry. I think she might be trying to protect them (but that's another story)


Oh yes calculating for his business, that's why he's lost billions while in office! Genius take there bud!

Let's just ignore every other congressman, and previous president who enriched themselves in office making exponentially more than their pay, but the guy that lost billions trying to run the country, we'll say he was trying to enrich himself! What a reality you live in

Very short sighted of you. Think long term. You got to spend money (or lose) to make money sometimes...

Do you think that the Trump brand has more potential customers now, or before he was president?
I'd say after. Shoot, there were people saying they were willing to give their LIVES for him.
I bet those same people will buy his books, Melania book (which she is already writing) stay in his hotels, watch his
entertainment channel when he creates one, etc etc! Look at how many people supported people that supported Trump,
like that My Pillow dude. Support Trump, sell a pillow!

Think in one hand and crap in the other.

See which one fills up first. x

We did not seem to have a problem colonizing the USA.

Hence the reason your own powers that be are mostly all 33rd-degree Scottish Rite Freemasons.
edit on 15-12-2020 by andy06shake because: (no reason given)