Walking down this road

posted on Dec, 4 2020 @ 06:04 AM
link
Right now everyone is focused on the potential outcome of the American election.

The United States are standing at a fork in the road, and in a couple of weeks we will know the direction the nation as a whole will take.

Both sides are convinced that if the opposition is victorious it will be an unmitigated disaster that will have far reaching effects that will be felt outside its own borders.


Does this election cycle have the ability to destroy the losing party?

People who voted for Trump in particular will feel that the election was stolen from them. Will it lead them down a road of political apathy?

What about the democrats. A lot of people are sick and tired that Bernie Sanders once again got cheated out of the nomination. Or perhaps he played along? Either way, if Trump wins, I have a feeling that the democrat party carcass will be picked clean, heads will roll. This will spill over to certain corporations who played a part in this very, very strange election.

My question is this: if your party loses this election, do you foresee the end of that political party?

If so, where does that leave the United States going forward? Will we see a Streisand effect with numerous parties popping up all over the place or will political apathy become the societal norm?

Whatever happens, will the United States be weaker for it, how, and to whose advantage?

Many, many signs point to where the destination is regardless of party affiliation. youtu.be...

originally posted by: 19Bones79
Right now everyone is focused on the potential outcome of the American election.

I hate to break it to you but the majority of people are already aware of the election's actual outcome.

posted on Dec, 4 2020 @ 07:21 AM
link
Until the two parties have politicians bashing each other's skulls in, live on the floor of Congress like in the 1850s Democrat attack of Republican Senator Sumner, I would say we haven't hit the lowest low yet: 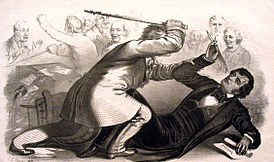 posted on Dec, 4 2020 @ 07:31 AM
link
Maybe the right-wing will splinter, you’ll have the Trumpublicans, Republicans and Conservatives. They’ll all still be considered right wing, but the Trumpublicans will take on the role that the Progressives now hold in the left wing; they’ll always be fighting with the rest of the right-wing, the Republicans and Conservatives will never be Trumpy enough and they’ll always be pushing for more Trumpy-ness in the party.

The next election we’ll have a Republican candidate who will be pandering to the Trumpublicans, telling them, “I hear your voices, I want to see an orange world as well. Together we can make it happen! With your help, I’ll be able to hire and fire my own people more than any other president in history!”

Call the "trump" faction what they are -- populists.

It's my feeling that Sidney and Lin are setting themselves up to be those "Trumpublicans" as you call them.

It seems that Newt agrees: Gingrich: "Lin Wood and Sidney Powell are totally destructive' - The Hill

If all this results in breaking the hegemony of the extraconstitutional "Two Party System" then it's all been worthwhile.

The left could also splinter between progressives and establishment-style Democrats.

Eventually both will give way before the inevitable force of socialism.

The progressive left has been rejected twice in recent history by the DNC unless they were useful idiots.

Biden is a corporatist.

posted on Dec, 4 2020 @ 11:32 AM
link
a reply to: Drucifer
I doubt that. Record numbers of republican voters voted for Trump. They are tired of the establishment and want to see America prosper.

No career politician has the ability to achieve anything meaningful for the country.

They tow the line and have begrudgingly supported Trump in order to stay relevant.

Oh. I guess it's official then.

Will check that out later, I have guests...

originally posted by: 19Bones79
Oh. I guess it's official then.

Yeah, pretty much, the whole 'wait for the Supreme Court' thing is out the door now that Alito is telling the Pennsylvania plaintiffs to respond after the safe harbor date and the Wisconsin Supreme Court told those plaintiffs to work their way up through the court system like they're supposed to.

Everything he says resonates with me but I have one question.

Why not endorse the socialist Bernie Sanders?

posted on Dec, 5 2020 @ 03:43 AM
link
Destroy probably not but the main parties splitting would probably be a good thing for American politics.

* I know there already is a libertarian party but they are pretty niche.

In my opinion, Trumpism is, at what little philosophical core it has, rebranded populist nationalism. The problem is, that is merely an objective creation to explain the subjective actions of a man that does whatever his instincts tell him is best for him who has learned to repeat a few key phrases that the populace (or some of us) have been programmed to respond to, like "America First."

Trump has far more in common with Huey Long than Adolf Hitler in my opinion. However, it is not Trump that we need to concern ourselves with.

What we've seen in response to Trump is the pro-business moderate right, moderate left and extremist left formed a coalition (which will soon, if it hasn't already, fallen apart).

This party is only getting started. Trump was merely a symptom of a deep-seated resistance to enforced egalitarianism.

Humans like many primates are xenophobes. We only act cooperatively when it is "us vs. them."
edit on 5-12-2020 by Gryphon66 because: NOted