Basically, they have a general area, of where it might have originated.

Still cool, that they have narrowed it down.

The biggest problem with the WOW! signal is that the telescopes have been pointed at that part of the sky on multiple occasions and no other signals of a similar nature have been detected.

This is not to say that the Signal itself is not extraterrestrial. I tend to lean on the side that it may very well have been alien. But it may have been a fleeting signal. An echo of the past shouted across the galaxy 1800 years ago. A cry for help fallen on the ears of civilizations that could not respond.

originally posted by: chiefsmom
A bit misleading title, not from you.

Basically, they have a general area, of where it might have originated.

Still cool, that they have narrowed it down.

I'm in general agreement the title is misleading.

However, it is not determining the general region of the sky of the signal's origin that is new as you suggest, that has remained unchanged.

What has changed is the 2013 European Space Agency launch of the Gaia space observatory, which created an improved star map of the sky, including the two regions where the signal may have originated, outlined in red in the following illustration:

An approximation to determine the source of the WOW! Signal 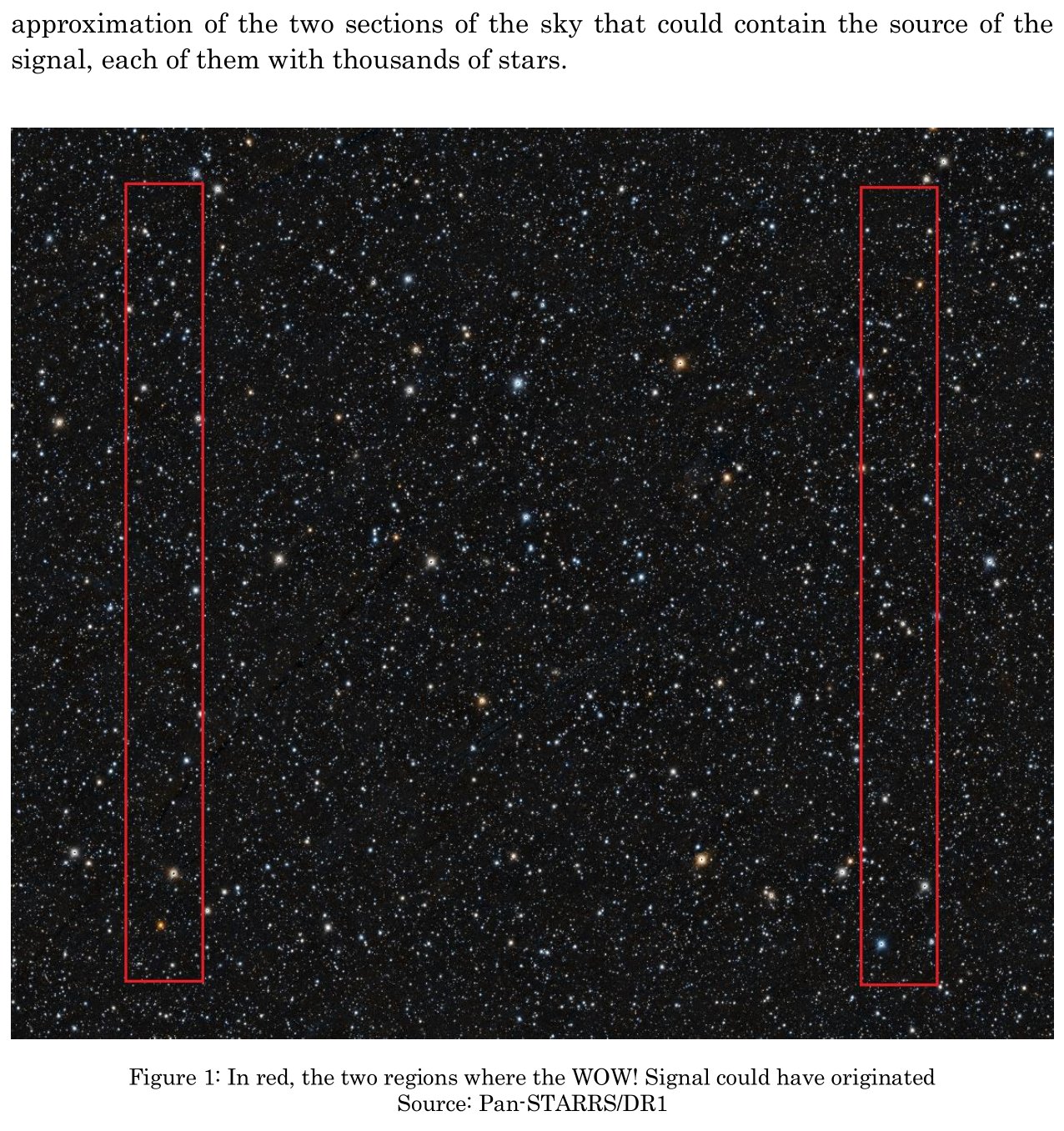 So according to the paper on which the OP article is based, that image shows thousands of stars in each of the potential source regions, so I'm not sure why they aren't all potential sources.

Apparently the partially implied and partially stated assumptions to narrow it down to one star out of those thousands goes something like this:

First, though the frequency is banned by earth-bound transmitters, that doesn't rule out some military or rogue transmission originating from Earth and reflecting back, either from a classified project which chose to ignore the frequency ban or possibly even from some country which never agreed to the frequency ban.

Second, while natural sources seem unlikely, it's hard to say there is no possibility of a natural source. Some other astronomical phenomena which were suspected of having alien intelligence as sources at first were later found to be the result of previously unknown natural phenomena.

Third, I don't think the assumptions leading to the idea that the candidate star must be like ours are supportable. We have already speculated that liquid water is what is really desirable for intelligent life, but this can occur not only with our type of star, but also with planets orbiting hotter stars at greater distances, or planets orbiting cooler stars at closer distances, which could also have liquid water. So this alone would open up the possibilities to probably at least several dozen stars in those two regions, from the new star map. To the author's credit, he does mention several dozen other stars in his paper also, which aren't quite like our sun but maybe could still be possible candidates.

So I'd say it's premature to pop the cork on the champagne bottle and say it's anywhere near "solved", it's not even close. This after the 2017 media claims that the source was thought to be a comet (which is now discounted as an explanation by most astronomers):


The internet is buzzing today over new evidence from Antonio Paris – an adjunct professor of astronomy at St. Petersburg College, Florida and ex-analyst of the U.S. Department of Defense – suggesting that the famous 1977 Wow! signal was most likely generated by a comet.

Unfortunately the WOW signal was actually a distress signal sent out right before the planet was overtaken by the Borg.
Best we leave things alone.

Personally i think nothing has been identified, maybe the area but nothing else.

The internet is buzzing today over new evidence from Antonio Paris – an adjunct professor of astronomy at St. Petersburg College, Florida and ex-analyst of the U.S. Department of Defense – suggesting that the famous 1977 Wow! signal was most likely generated by a comet.

Which is who the OP is claiming to be, see the thread i linked to above

originally posted by: SecretKnowledge
a reply to: Arbitrageur

The internet is buzzing today over new evidence from Antonio Paris – an adjunct professor of astronomy at St. Petersburg College, Florida and ex-analyst of the U.S. Department of Defense – suggesting that the famous 1977 Wow! signal was most likely generated by a comet.

Which is who the OP is claiming to be, see the thread i linked to above

No, that's not the same person. The comet possibility was proposed by astronomy professor Antonio Paris, who is not the author of the paper this OP references, Alberto Caballero, who is not proposing a comet, but rather apparently an alien civilization sending a signal from a planet like ours orbiting a star like ours as the source.

They were thought to be two objects inline of the sensors to create the signal.

The telescope is shutting down anyway.

originally posted by: MissSmartypants
a reply to: alfa015222

Unfortunately the WOW signal was actually a distress signal sent out right before the planet was overtaken by the Borg.
Best we leave things alone.


What??? We're humans, we don't know how to leave well enough alone.

Cool, this is where in countless millennia some future being or intelligence from earth finally reaches that place and if something is still there to greet them and remembers it them it just answered or sent back a signal it once received from the region of space were the earth is long ago, an answer to a hello by a civilization that fell long ago and a conversation that may have began here or perhaps the ancient civilization that first sent out the first hello that was so long gone and forgotten itself was only answering another hello over the vast gulf of time and space.

Sorry I used to read science fiction comics as a kid and one of them had a series of story's called future shock in it.


Wasn't there another signal were when one of the astronomers/researchers/students or something idly joined the binary print out joining the dot's on a print out (1s or binary dot's if you like were the 0's are empty space) it shockingly showed a image pattern of a man like stick figure and radio telescope and I am not talking about the crop circle possible answer to the similar signal WE sent out or our own signal but something that was thought of as just background noise and pushed under the carpet so to speak I remember it from a documentary a long time ago, the print out was at one of the Radio Astronomy's maybe even Jodrell Bank an aging facility in the UK, the Dot's in question were the 1's in the binary print out and the researcher just idly joined the dot's with his biro before getting a bit of a shock at what it turned into, a three stick figure with a triangular head, three fingers at the end of the arm's and a upturned triangle that may have represented a radio telescope.