The game is on and it is incredibly suspicious that Hillary Clinton has been absent from the campaign trail in the final days of the presidential race, even as former President Barack Obama ramps up his role as surrogate-in-chief for Democratic nominee Joe Biden.

Clinton's twitter acct shows activity about 16 hrs ago and one retweet re: Chelsea's plea to voters.

October 29, Clinton revealed she is listed by New York State Board of Elections as one of 29 Democratic electors for the state.

This is curious: "Pretty sure I'll get to vote for Joe and Kamala in New York ... I can't wait," Clinton said in an interview aired on SiriusXM Progress.

Notice the words "pretty sure," coming from a women who knows how to phrase a sentence. I have searched for this article and it is being edited to change pretty sure to sure.

Currently, USA TODAY says pretty sure -
Hillary Clinton joins Electoral College 4 years after it cost her the presidency: 'Pretty sure I'll get to vote for Joe'

Where in the world is Hillary? 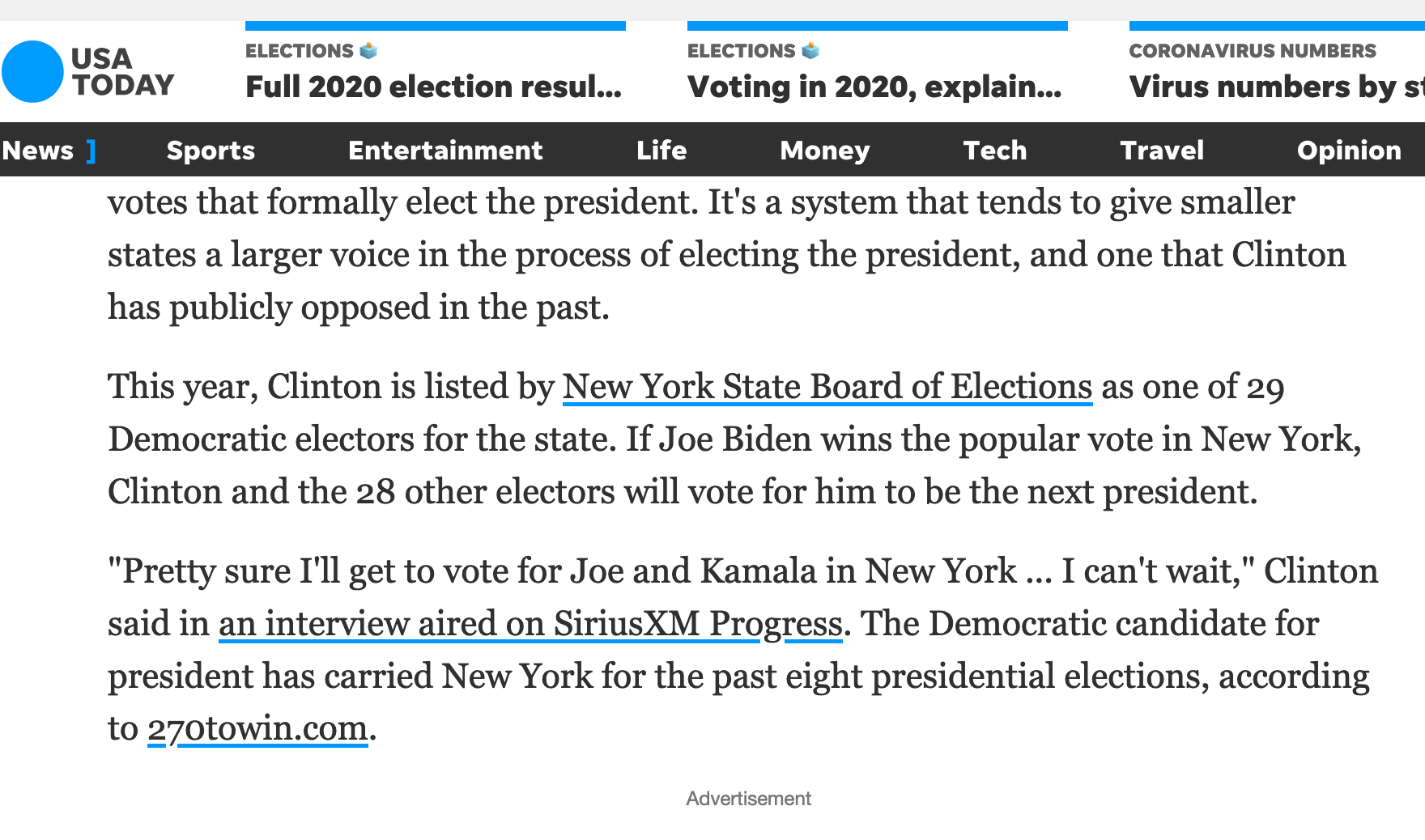 Why should she be on the campaign trail? That seems like a risky move for the Biden campaign.

Yep, she has been hidden by the Democrats ever since she added to Deplorable which was her #1 downfall in 2016

A few weeks ago she added to deplorable, racist, sexist, homophobes

She loves to insult voters.

It is like the Queen Bee at school who mocks and insults most of the kids at school. She thinks she is popular, but in reality the vast majority hate her and will never forget or forgive how she treated them, ever.

The Democrats know she has so deeply insulted conservatives and 60+ million actual voters (Trump voters 2016) that they will never, ever, ever, vote for a Democrat as long as they live. She has that special talent.

That is why Biden went soft with his insults and only called conservatives ugly chumps.

While it may seem that way, it didn't stop Clinton from fundraising, her last event was in Sept with Amy Poehler, Maya Rudolph along with Kamala Harris. Clinton carries a sizeable group pf supporters and her "disappearance" is notable none the less.

posted on Nov, 3 2020 @ 08:54 AM
link
The equivalent would be like wondering why Jeffery Dahmer wasn't out campaigning for Trump.

Maybe it's the likability factor....

For Dahmer I think it was the lickability factor.

They know that the public hates that woman more than anyone else. They probably think that if she shows her goblin face then it'll ruin their chances even more than they already have.

Don't forget that biden even called one of his own supporters a "dog faced pony soldier". Whatever that means.

Don't forget that Donald told everyone at his recent Michigan rally that if he lost he'd bring back Japanese car plants. 😂 They're both idiots.


What good do you think one of the most reviled people in American politics could do for Biden's chances of winning ?
Is it really surprising to you that she is absent from the campaign trail ?

Clinton was a very, very unpopular candidate, in fact thats why I get a little annoyed when Trump supporters think hat being anti-Trump is to be pro-Clinton, its really not, that woman was very unpopular.

Thats why she is absent, the dems know how unpopular that she was so they've asked her to keep distant from the election as much as possible.

It really is that simple.