Personal anecdotal BS I hear and see on a regular basis

I see people talking about and sharing graph after graph showing whatever the current infection rates are, but they never show graphs that depict deaths.

Here's an image I saw earlier. 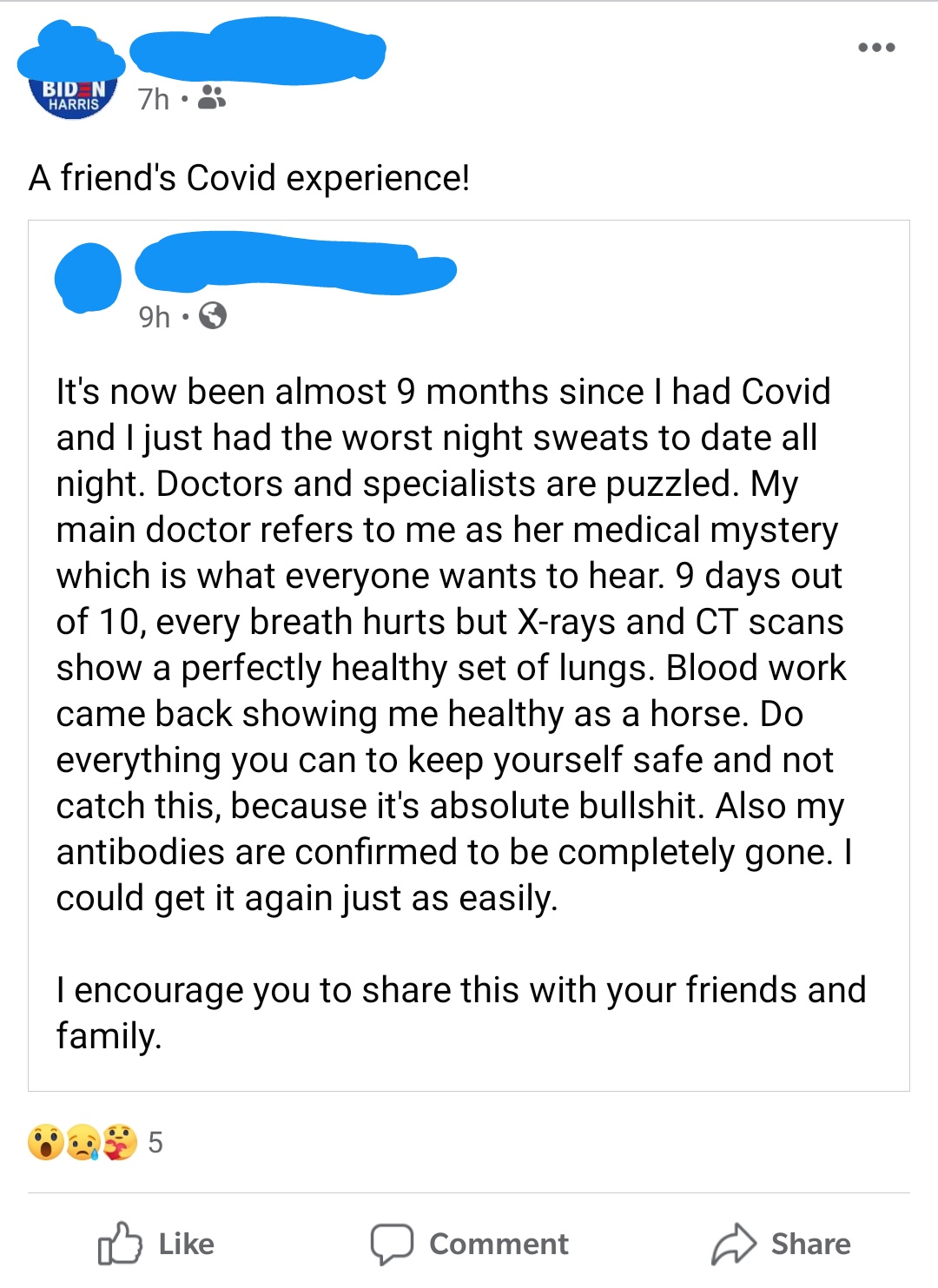 This guy claims to have had Covid, but almost 9 months later he had "night sweats," and "9 days out of 10" every breath hurts, even though his xrays and ct scans show his lungs are perfectly healthy.

Also his "antibodies are confirmed to be completely gone" and he worries about getting it "again."

This reads like BS to me. And apparently to some other of his friends as well, because they called him out on his all day every day smoking which he deflected from.

He supposedly had what is supposed to be the scariest new virus in the world and he recovers, only to claim that he now has trouble breathing, even though the scans say that his lungs are healthy, even despite his daily smoking.

This kind of stuff is why I don't take people seriously. I'll be honest I don't believe the guy. He's just trying to get some pity support.


What are some BS anecdotes you've heard?
edit on 2112020 by AutomateThis1 because: spelling

posted on Nov, 2 2020 @ 04:56 PM
link
All of the posts that claim # like this or that they knew 12 people who were peRfEcTlY HeaLTHy and DIED FRAMTEHCOVAIDSZ all read the same way. Bull#ty.

posted on Nov, 2 2020 @ 05:00 PM
link
Yeah smoking will do that to you. So will anxiety.
C19 is real, sure, and I wish the best to everyone who's gotten it for a speedy and complete recovery, okay, but same and so as with the flu, colds, etc, strep which can also kill you, I could go on, there is all kinds of microscopic BS on this planet out there just hoping to bring some unwitting human to their untimely end, but anxiety, stress, smoking, excessive drinking, etc will do a nice job giving you night sweats and or other "symptoms."

People enjoy pity. They love to make you feel sorry for them, it's called "layin' it on thick."

posted on Nov, 2 2020 @ 05:00 PM
link
I’m personally tired of the media and politicians using non peer reviewed studies to scare the beegeezes out of people not educated in the field. The removal of peer review was facilitated to share data, save lives and benefit society. Now we have researchers rushing to publish, violations of scientific integrity and a pissed off society that will be resistant to productive measures to put an end to the crisis.

Between the election and whatever the second wave may be it’s going to be a crapshow this winter and it really didn’t need to be....

posted on Nov, 2 2020 @ 05:03 PM
link
It is known that ventilators can cause scarring of the lungs, COVID can damage the heart and lungs.

Oh look isn't he speshul...he's a medical mystery. Now he gets to tell everyone forever how speshul he is. Oh man, now in the future instead of listening to how speshul everyone is because of their anxiety or their depression, we'll get to hear how speshul everyone is because of their mystery covid symptoms. Oh boy, I just can't wait to hear what kind of speshul little unique snowflakes Covid will make everyone. No two are the same. Covid affects each of us in our own speshul way. Mystery covid symptoms, the next generation identity politics. The 2020's are gonna kick so much ass.
edit on 2/11/2020 by dug88 because: (no reason given)

Around the end of June one of my neighbors actually tested positive for the 'rona. He's in his late 60's, so he was a little worried. Said it was basically a head cold, and felt better in a week or so.

I was talking with one of my other neighbors, stating that I only knew one person "personally" that had gotten covid-19. He informed me, "Well, now you know 2." He had it, too, but didn't have any symptoms at all. (in his 40's). He has a large family, but his wife and kids did not test positive, only he did in his household.

So, later in September, my wife had some knee surgery scheduled, so she had to get tested before her procedure. We went and got her tested on a Saturday (with zero symptoms). On Sunday they called to tell us her test came back positive. Monday she had a pretty high fever which worried me a little bit with her asthma. (We're both 54). Myself and my 2 adult children that still live at home also got tested on Monday after her result. We all had zero symptoms, and all of us tested positive. Put on your tinfoil hats, but none of us had any symptoms until after we got tested.

Anyway, I would have just thought it was the flu if I didn't know it was covid. Fever for maybe a day, dry cough for about a week. I did feel really tired in week 2 of our quarantine, but nothing major. Luckily, I was already working from home, so not a big deal. It's been 6 weeks now, and none of us have any lingering problems. We did stay away from my 80 year old parents just to be safe, and I think my Mom was more worried about it than I was.

That's what is so baffling, and who do you actually believe? None of us had any issues, yet others are heading to the ER and dying from this thing. What is the truth? Did we just get lucky? Got a different strain? Conspiracy: did the test actually give it to us? So, now my area (Utah) has cases spiking up and people are freaking out. I'm trying not to be cavalier about it 'cause it is serious for a lot of people (obviously), but part of me is like, "What's the big deal? Been there, done that." (I also don't want to sound insensitive. I'm sure if my parents got it my perspective would be a lot more serious because I think they would really struggle with it 'cause my Dad has copd, but that's what happens when you smoke 2 packs a day for 50 years.)

CT, X-Ray, and blood work all come back healthy...and there is nothing in the post about even being hospitalized on a ventilator. So what's your point?

My favorite thus far is from a Democrat relative living in Alabama who told me yesterday, he was not going to vote tomorrow because "the numbers keep going up".

posted on Nov, 2 2020 @ 05:17 PM
link
Most of the claims on here of "I know so-and-so, and they're #ed up from covid now", I categorize as bullcrap. It's always from the same staunch nitwits in favor of balls-to-the-wall heavy-handedness, with the added suspicious factor of no new folks backing them up all these months in. Stinks like quite the pile of manipulative BS to me.

If guy is in the range of, say, age 50, then it's ENTIRELY possible he's got some male menopause gearing up (aka andropause, you dudes really do get a version of menopause) And being a smoker won't help andropause out any.

posted on Nov, 2 2020 @ 05:42 PM
link
Thing that gets me is fake stats: "30,000 cases resulted from a Trump rally." and similar BS. What we have here is someone with a spreadsheet gone wild. Spreadsheets can calculate totally nonsense statistics to 8 places past the decimal in half a second. Assumptions gone wild.

I still don't know anyone

who has had covid-19 and I have family in 5 states.

However there are about a million BOTS posting crap every minute of every day. Some of the Covid findings and "some" of the longer term effects are genuinely scary, but it's a crap-shoot if it'll happen to you or not.

As far as anecdotal stories go, some of us at work are petty sure we had it end of January, beginning of February. But because our workplace pretty much fires you if you test positive (past or present) none of us are willing to be tested for antibodies. I can't believe only my workplace has this attitude so I'd guess many more people have had Covid than will ever mention it.

posted on Nov, 2 2020 @ 05:56 PM
link
Sounds like some neurosis and psychosomatic symptoms. That disease is not funny and capable of simulating any disease. From rash to heart attack.
edit on 2-11-2020 by KiwiNite because: (no reason given)

Makes sense since covid is just a new cold virus.

I never knew how deadly the cold and flu viruses were till this new cold virus came along.

The OG cold viruses have been killing people for a long time. They just have never gotten the proper respect.

The 5G activates COVID, I think is my favorite one.

originally posted by: Hushabye
All of the posts that claim # like this or that they knew 12 people who were peRfEcTlY HeaLTHy and DIED FRAMTEHCOVAIDSZ all read the same way. Bull#ty.

That was my reaction as well. You can tell some of them are just repeating # they heard elsewhere for attention.

We had a user here pretend to know a ton of people who had died from Covid a few weeks ago and got called out on it.

What are some BS anecdotes you've heard?

“We have more cases because we test more!”

Probably the most idiotic thing I’ve heard during this pandemic.

That guy is bull#.

Sh!t like that is what people say all day, or that their friend’s mom’s son had it, etc.

That’s why when I say that I’ve known more than 20 people who have gotten it, I say “first- hand” because these are people I have in my phone and we actually talk and text. I was at a gathering the other night and several people there were telling stories about people they know who have had it (all, by the way, who had no troublesome symptoms, not even fever), but I will never count those as people I know who have had it- because I don’t know those people.

Those 20+ people I know personally who had it, my 76 year old dad had fever and aches for over three weeks; and an 18 year-old student of mine lost her senses of taste and smell for a while. Everyone else only even knew they had it because they had to be tested to return to work or school.

The media and politicians and REGULAR COMMON CITIZENS are lying and sensationalizing with their “deadly virus!” bull#. It’s like the flu- for some folks, a small percentage, it’s a problem and can even kill them. But for the vast majority, it’s a non-event. Well actually, it’s less of a thing than the flu, because unlike the flu, most people don’t even have any symptoms with this thing.