originally posted by: Nyiah
When cowering in fear and denigrating those who aren't is the New Normal, we have a very serious problem going on. Other than refusing to acquiesce, and literally showing people via continuing to live life that it's not an inherent Instant Death to do so, I'm not sure how to get through to people. You cannot make someone open their eyes and ears, they will only turn into massive hypocrites and wail about being disrespected & forced, etc.

originally posted by: DougHole64
I thought that it was all one big liberal hoax until I caught the bloody thing from one too many trips to Wetherspoons. I was very sick, could barely breathe and being a lone divorcee was unable to take care of myself. Fortunately, I was able to fly to the United States where I convalesced with my sister before deteriorating and ultimately
landing myself in hospital. I'm lucky to be alive. Everyday I thank God and President Trump of course for allowing me to fly to be with my sister and get the best treatment in the world.

Congrats, you drew that Get Sick short straw. SOMEONE has to, for any illness. Now you know what it's like for the folks who draw that straw for the flu every year, and for regular colds --yes, regular non-covid colds even do that to people and you don't have to be immune-compromised or a geriatric invalid in the home to strike that stretch of bad luck, either. I think this is what people flat refuse to open their brains up to try to understand, it doesn't match their bias in any manner. Therefore, "ZOMG, it really was the microscopic devil!" takes over where common sense should have said, "Well #, my luck really sucked this time, didn't it?"

Exactly! This is what I keep trying to tell my sister. Of course she won't hear any of it! The fact that her on/off lazy excuse for a husband happened to catch this whilst I was staying with them is purely coincidental. If it's your time. It's your time. And in Hank's case, sadly it was just his time. I was lucky, other than a very mild case of trichomonasis I had no underlying health issues. Hank on the other hand was crazy and drank at least a bottle of Johnny Walkers for breakfast. Technically he killed himself, that's what I keep telling her but will she listen to me?

originally posted by: daskakik
a reply to: Zanti Misfit
I think the real choice is Fake Safety or Fake Freedom, just sayin'....


No Such Thing as Fake Freedom , you either Demand it in your Personal Life or Grovel for Crumbs from those that Own your Ahass Son...........
edit on 26-10-2020 by Zanti Misfit because: (no reason given)

posted on Oct, 26 2020 @ 06:08 PM
link
a reply to: Zanti Misfit
Groveling for crumbs and thinking you are free would be the fake version so I guess there is fake freedom.

Of course, someone convinced that they are really free when they are not probably wouldn't be able to tell the difference....

Groveling for crumbs and thinking you are free would be the fake version so I guess there is fake freedom.


For once I agree with you.

posted on Oct, 27 2020 @ 10:48 AM
link
a reply to: ChaoticOrder
Actually, I recall us agreeing on many occasions over the years. I might be remembering wrong.

On this topic I have to disagree based on the two camps thing. First of all you lumped lockdowns with masks. Seems to me that there are a lot of people who have no problem with masks but think lockdowns are wrong. That alone makes for an additional camp. I'm sure there are those who don't agree with masks or lockdowns who also don't "think it's all just fearmongering".

Like I said, I'm thinking most people would rather err on the side of caution and think some measures are fine but that is a far cry from prolonged lockdowns.

Do you think any are interested in erring on the side of the rule of law?

Is the rule of law suspended during times of universal deception and mass hysteria?

If the entire population of the US rioted then things would look quite different.

Fortunately a few courts are weighing in favorably, but many if not most Americans are walking around with face diapers on.

If people are not breaking the law one would infer that they are erring on the side of the rule of law, which was your question.

Now, the point I brought up was about people ok with masks but not lockdowns, which doesn't fit the false dichotomy posited in the OP.

I was not clear enough in my first post.

By rule of law, I was referring to the legality of the various lockdown orders by governors in the US.

So far, 2 different courts have ruled that the orders by the governors of Pennsylvania and Michigan.

The governors have violated the law.

Seems to me that there are a lot of people who have no problem with masks but think lockdowns are wrong.


Like I said there are exceptions but I doubt there are many people who think wearing masks should be mandatory anywhere in public but disagree with the lockdowns. I have nothing against people who want to wear masks, the issue is forcing people to wear masks. In fact I would say there is far less evidence of masks working than there is for lockdows working, at least lockdowns do have some impact on the spread of a virus. Once again I'm not against lockdowns, I'm against prolonged lockdowns when there are is barely anyone dying, I'm against over-flattening the curve, I'm against fearmongers who are now trying to eliminate Covid-19 all together as if it were even remotely possible.

posted on Oct, 31 2020 @ 05:47 AM
link
Some Germaphobes have Obsessive-Compulsive Disorder OCD , and some pro maskers have signs of psychosis . People with psychoses lose touch with reality, and when looking how people think that face mask will protect from virus i see that they lose touch with reality ...it`s not nice to watch. 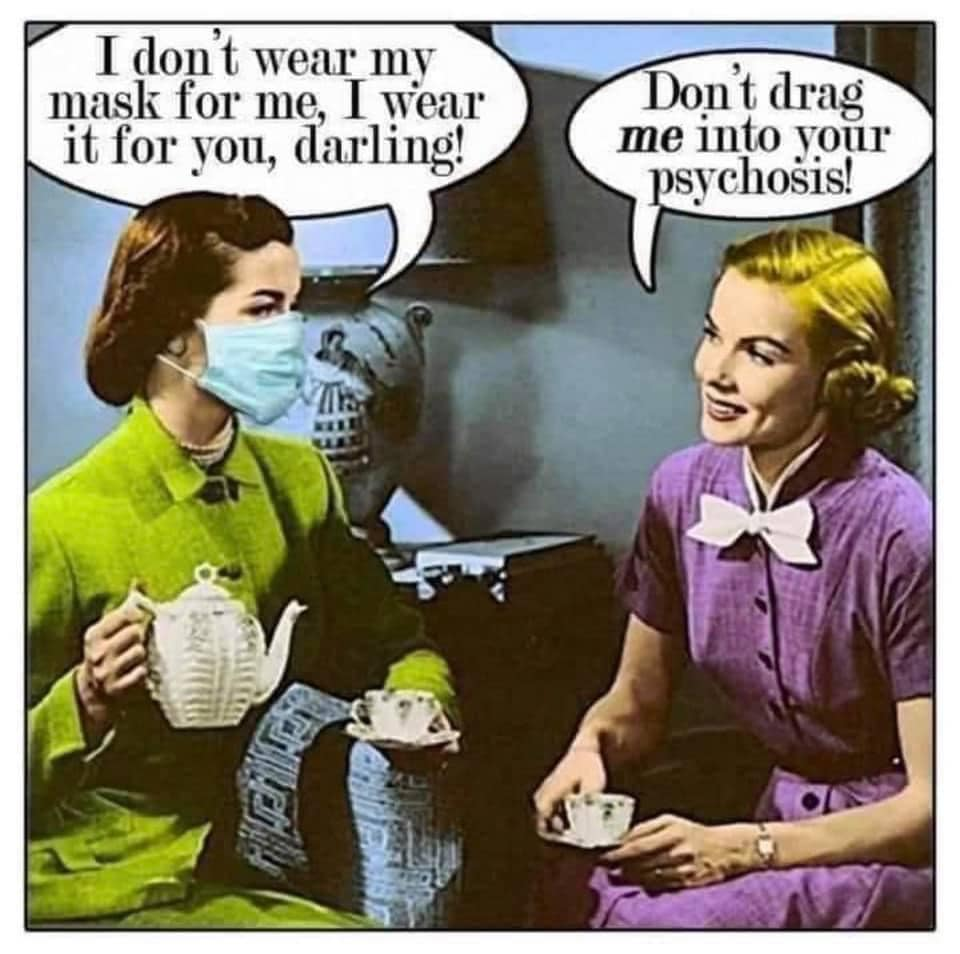 I just pointed out that you lumped a whole lot of people together to come up with just two camps in the OP, one of them being "either they think masks and prolonged lockdowns are a good idea".

Not saying some of them germaphobes have not as well.

People lumped themselves mostly into two camps, I didn't do it. I believe it's the result of divisive politics more than anything else. It's no coincidence that all the members I used to debate about socialism etc are all the same members I'm debating about the lockdowns and masks. Obviously I'm generalizing to an extent and there are exceptions but my underlying point is valid.
edit on 1/11/2020 by ChaoticOrder because: (no reason given)

posted on Nov, 1 2020 @ 01:01 AM
link
a reply to: ChaoticOrder
I don't know who you are debating here about lockdowns and masks but I see a lot of people who don't agree with lockdowns (in general, let alone extended lockdowns) but are OK with masks.

You lumped those two groups together in your OP and that undermines the point because you are trying to say that these people fit into a group that champions both. I don't see it that way and honestly you are the one who seems to be perpetuating divisive politics.

posted on Nov, 1 2020 @ 09:52 AM
link
Religions supersitions have been used play similar games, just like it was believed that the Black Plague was a punishment by god, and even Gods chosen people were to blame. Or that guy from River Monsters was believed to be the cause of a disappearing tribal chief when he showed up, and may or may not wanted to eat him.

Luckily, for him the leader showed up. Ironically, used hand sanitizer much like using holy water, cleans all an burns all the sins away in "Eternal Sterilization" of the Bacterium of Old into a lake of fire water. Or getting a back hand for having your sleeves rolled up in church, thinking it will incur the wrath of a heathen god.

Fear a prime motivator when it comes to these thing, much like how the Nazi used to say "it for your safety."
Or like a bunch of monkeys who dont want to get hosed because of one monkey, so they attack that one.
edit on 1-11-2020 by Specimen88 because: (no reason given)[/editby