The state Supreme Court was still reviewing whether to take further action in the case and ordered both sides to file their responses by 5 p.m. Monday. By then, there will be just more than one week left for voters to return their mail ballots in person to early voting clerks around the state.

Several Texas chapters of the Anti-Defamation League, the government watchdog group Common Cause, and two Texas voters filed suit against the state, saying Abbott’s order overstepped the governor’s authority in the Texas Constitution and violated equal rights of voters.

For those of you unaware of the story, Gov. Abbott issued a last-minute order earlier this month directing Texas counties to provide no more than one hand-delivery location for voters casting absentee ballots in the November election, one day after the state's solicitor general had signed off on the legality of multiple locations. The impact of this decision unfairly targeted more liberal and minority counties; 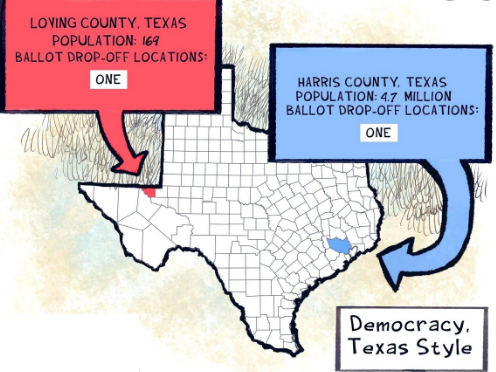 There was an obvious political motive behind the move and thankfully the State courts had taken appropriate action, something unexpected. This is a battleground State apparently, with reports that Biden leads by one percent there against Trump. With that said, reports are in that registered Republicans are outvoting registered Democrats in both Florida and Pennsylvania, so Abbott may be doing his side a disservice if anything. I anticipate more State shenanigans in the days ahead.

The problem you have here is that I have read proof of DNC shenanigans till the cows come home over and over again. Actually I have witnessed them personally where I live. I once had a DNC pal ask me to help him as he drove a van around the inner city picking up bums and giving them smokes if they voted Democrat. And that was well over 20 years ago.

I am not so foolish to believe that the RNC doesn't ever do similar things, but I do also know that the DNC has activist judges that are far more likely to overturn or find law that doesn't exist to keep their pals in power. And it seems they do so much more than Republican judges.

Anyway, I will read the link at some point and see whom this judge is aligned with. I am almost positive that will shed some light on the matter for me.

Does anyone ask why Common Cause (an activist group for the Democratic party) and the ADL (a leftist group) are pushing for more absentee ballot drop-off locations?

Is there a motive behind it that will help the Democratic party in Texas?

Unlikely, but there would be a fair number.

Do you expect all 4.7 million people to fit into your tiny box? Different people from different strokes, different circs.

No, it's fairly evident he did it to limit votes in more liberal counties. We all know this, it's just a cat and mouse game at this point with how we choose to address this.

Also, without looking into those cases you've linked, in a country of 320 million people, with some 160 million odd eligible voters, there's bound to be some degree of fraud that will occur through all methods of voting. The frequency is just far less than what rightwing nuts claim to be. voter impersonation is still by far the more common case of voter fraud overall, so by your logic we should be limiting in-person voting as well.

Always great doing the dance with ya Lum.

As for the rest of us, we will be voting Trump.

Why is it such a hassle to have an ID and go vote in person??

There is probably only one court house in each county. And a good possibility of only one DMV.

What’s your point? That people have to travel to a centralized business office to conduct county related business?

originally posted by: Southern Guardian
a reply to: TexasTruth


Ummm, that's not accurate at all, the economic engines ARE the rural areas of Texas.

Dallas, Austin and Houston are Blue, Everything else is DEEP red and Purple.
Take San Antonio, Purple.

Harris County, or Houston, is ripe with voter fraud. However, that's the beauty of the electorate.

Also, I don't have an issue at all about the drop off locations in Houston either, as Republican turnout is much higher during Presidential elections.
Texas is pretty strict, Me and the Wife voted in person already.

As a Texan, some facts. Houston is so large it takes up two area codes. It also has the largest black community in Texas.

Thank you! Where I live is a very small but wealthy area. Tons of land with gas/oil wells on them along with cattle, cutting horse ranches, and hay fields.
Now the corporate side of those oil companies are in the Dallas/Houston areas. So the super rich and all those other groups I mentioned live In those Democrat “utopias”. Lol