What I will do if Biden and the DNC types "win"


originally posted by: neo96
a reply to: oloufo

If Biden wins, and they instititute Medicare for all. The STATE monopoly on healthcare.

How many people do think are gonna get fired from the middle class paying jobs at health insurance companies, and others that all make that entire industry?


in germany, it's quite normal that every citizen automatically has health insurance. you don't have to pay for an operation unless it's a cosmetic procedure, for example. the doctor's visit is free. only dentist is expensive! why doesn't that work in america but in most of the western countries?

I pay about 120 bucks a month for health and dental combined. With little to no copay on my private plan.
It's not that expensive

You misunderstand the post. I will not have the money to pay the 50 employees. I have worked 6 days 12+ hrs for years I am no king of the hill. Unfortunately, I am a slave to my government, look at your paycheck and how much you do not see every week you get paid. You will receive the majority of yours back with tax refunds. I never see a tax refund yet I take bigger risk, I employ fifty plus tax payers, I put far more hours in then every one of my employees.

You think I would want to throw away my life's work to be "King Of the Hill" lol your part of the problem with our country.


i'm in germany and the king of the hill wasnt my quote.(;
but good luck, maybe there is a happy end for you. you never know.

Its just politics to most Americans but its livelihood to small business.

competing with slave labor in china drives wages down for American workers and probably has the heaviest impact on wage stagnation.

and the cost of doing business rises substantially with above factors and on top of that increased taxes on small business.

Biden says hey no one is taxed higher that make under 450k, but what most folks dont understand the company makeing more than 450k is spending that money on 50 plus employees and he doesnt disclose how it affects small businesses as a tax raise across the board.

Truth is it trickles down so all employees suffer in small business because business owners can no longer afford to pay decent wages when factoring in the list I mentioned above.


If you are a supporter of Antifa or BLM you are and you do not know it. If not, then no, disliking Trump alone is not indicative of being a Marxist.

You obviously have never owned nor had any stake in the success or failure of a business. You know nothing.

I am in the exact same boat. 300% jumps on lumber 20-50 on steel costs.
This has all happened under Trump.
All of it.
I could care less about politics.
It's a literal choke-out of small business.
The sheep eating up political theater, while being condescending about how good their side is while pretending there are 2 different governments basically makes me want to scream.
I have a kid due in a few months and there is a giant "sabotaging" of society going on, while people have zero street smarts about the good cop bad cop grift.
Our markets are getting decimated all at once.

edit on 10 by Mandroid7 because: Sp

Sorry if I jumped on you about your sh!t.
I just didn't want to see your people suffer over some political theater.
They elect who they want.
Good luck, I hope you will experiment with different buyers and distributors to stay afloat.
We should hopefully see some market reversal after the elections.
I'm done with ATS politics.
Absolute trash waste of my time and resources.
I'll be around for any cool topics though.
Politics are for absolute brainwashed sheep.
I'm out

1 Who exactly are these Marxists?

2 and volunteer at the senior center in my village

3 I guess because I think trump is a dushebag, I'm a socialist eh?

1 Well BLM is a Marxist movement supported by the Democrat Party. Their core is a hate group like Antifa and if you vote Democrat you are supporting both groups. The only people who do not want police around are the criminals and those who get speeding tickets.

Carl Marx invented Marxism as a society where there was no class system. Like Socialism, it sounds good, but in real life it never seems to be good for the people.

Does that all sound correct?

2 Aha! You live in a village. Doesn't that make you a marxist/socialist?

Very mature of you Fools. I hope people from both sides will do so.

in germany, it's quite normal that every citizen automatically has health insurance. you don't have to pay for an operation unless it's a cosmetic procedure, for example. the doctor's visit is free. only dentist is expensive! why doesn't that work in america but in most of the western countries?

You're confusing health care with health insurance. But you're not alone, our politicians have been trying to confuse Americans that way for decades.


The reason no one in US politics is calling for government health care like you have in Germany or similar countries is because it would mean the end of the health insurance industry. That's the opposite of what the lobbyists want. Also, they can see the problem it would cause. Do you have the same health care as Merkel? Why aren't you complaining about that? Americans would.

Imagine Americans demanding that a homeless person get the same level of health care as a Congressman. They would be perfectly justified in doing so.

originally posted by: tinktinktink
I will lay off 50 plus employees and close up my furniture shop. We have been putting in years and years of our lives building our business and I just dont see struggling if the American people lack the common scene to vote with some intelligence rather than electing a thug, that's just gonna hand the country over tp a group that have no moral code and dont care to take from small business as if our risk,time, and hard work stands for nothing.

I'm right with you.

I have put my business on hold since March of this year.

If Biden wins I will sell my equipment (while I still can) and retire.

If my accountant is correct, our government and state will lose over a miilion and a half a year in tax revenue from my little company.

I am but one of hundreds of thousands of small business owners who will do the same thing.

But there is no sense attempting to move forward with the Democrat's ideas.

I would just work my butt off for a few years to lose everything and then my equipment would be worth nothing in a no fracking environment.

So nope... if Harris wins I will cash out of the game and watch the world burn from the comfort of my home.

Pull every penny out of my 401k and take the tax hit now. I've read about what Biden wants to do with the 401k system, so I'll get the jump on it and move my investments elsewhere. I'm moving out of the suburbs and into rural SC by the end of the year, so as long as the riot crap doesn't get worse by then I'll be far enough removed from that as well. I will certainly push for 100% work from home as I wouldn't want to go to a city after this year, it's been a friggin' nightmare. I'll be very disappointed in my country as well, but oh well, I'm just one guy.

originally posted by: DBCowboy
I want to be Leader of Sector B, Area 37 of the New People's Republic of North America.

I WILL be wearing the outfits like the movie, Little Sister.


I WILL be wearing the outfits like the movie, Little Sister.

And the mental image of that just made me pop a cork.

On a very nice bottle of wine.

And the hopes that it will completely obliterate my short term memory.

originally posted by: tinktinktink
I will lay off 50 plus employees and close up my furniture shop. We have had our ups and downs but the Obama years really hurt and we barely made it through.

Wow
laying off 50 people because a mild tax alteration will put you under.

sounds like maybe running a business isn't your forte. don't get me wrong, its hard running a business, but if you can't figure out how to make a profit (and hired 50 people who aren't making your margins steady under any circumstances) then I think maybe the problem isn't who the president is but rather how you are running things to begin with.

posted on Oct, 16 2020 @ 11:40 PM
link
The OP is a prime example of how we all should be come election year. The fact that the left could not get over the 2016 elections go to show how fragmented that ideology is.

If Trump loses, I will certainly be disappointed and sad. However I won’t riot, move or cause general mayhem. Like the OP, I will be that much more invigorated in the Political scenes to really come out in force.

That being said, I too don’t believe Trump will lose. His campaign is just as engaged as the Democrats, if not better. Especially their ground game where they literally are decimating on the door knocking front. Never have I seen a mobilization engaged for Voting in person since, ever.

originally posted by: oloufo
a reply to: Fools

what do you understand by marxism? in my understanding (and i can be totally wrong) it is about the working class overthrowing the powerful and destroying or redesigning the 'apparatus/system'. all this should lead to a classless society. the last sounds good but in my opinion we humans need institutions, guidelines, an order, common rules, otherwise we will end up in the middle ages again. biden is not a marxist. neither is obama. or any other democrat. this is absurd. i don't know if there is a communist party in america, but this system is not applicable to a liberal, open and diverse society. marxism is a fighting term and is used for scaremongering - and it was established by right-wing radicals in the early days of the internet.

An example of a communist movement in the U.S. 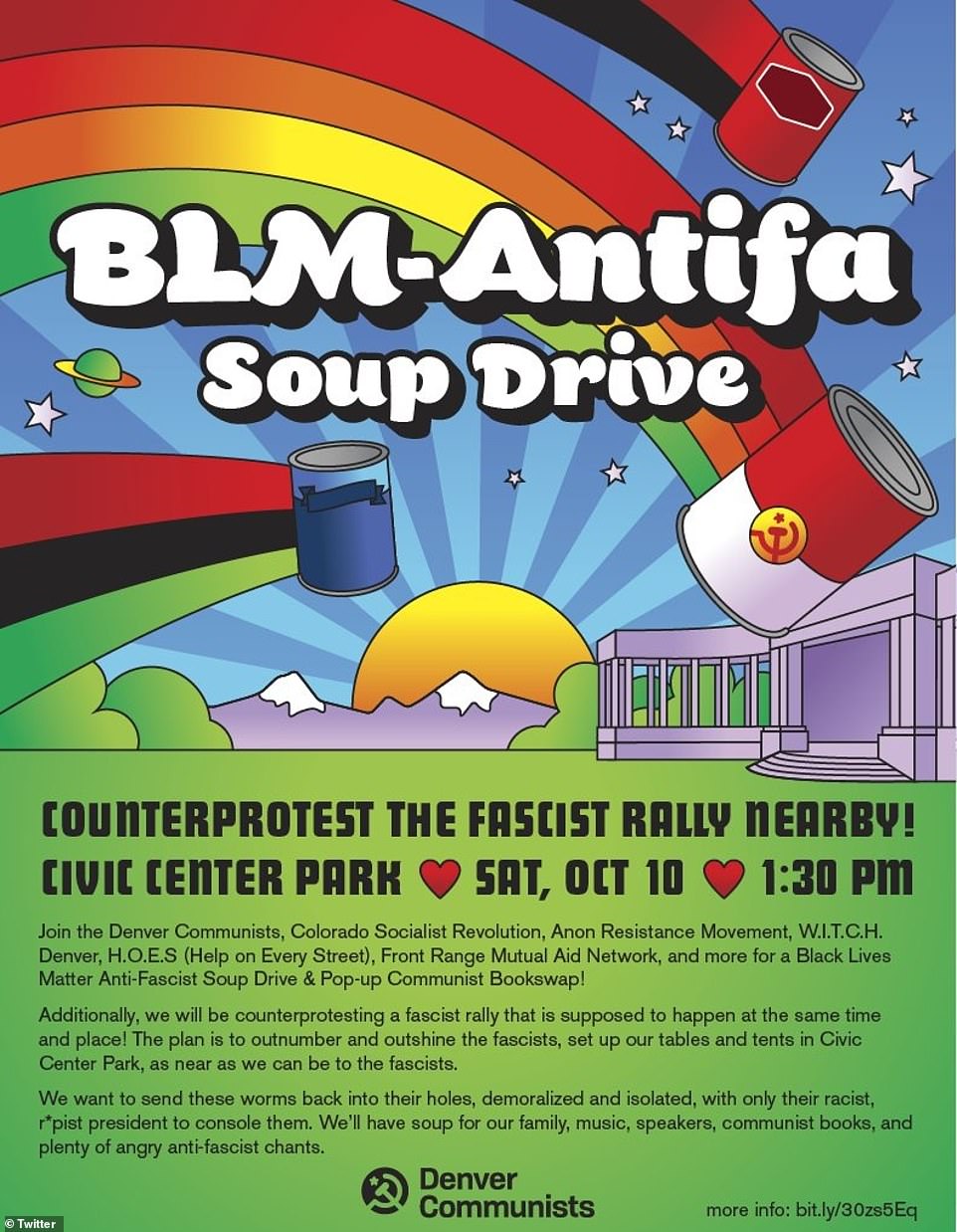