During a Town Hall tonight hosted by NBC, this very nasty moderator spoke far more to President Trump than the Miami citizens participating in the Town Hall.

She was particularly nasty and disrespectful on the subject of wearing masks during the Covid-19 epidemic.

The Center for Disease Control (CDC) published a study this Summer showing that 85% of those who contracted Covid-19 wore a mask most or all of the time. In other words, the mask was ineffective 85% of the time.

Here is a video of the full 1-hour Town Hall. But the mask hysteria from (whatever her name is) starts at the 28min19sec mark.
President Trump tweeted earlier today that he was willingly heading into a "CONcast NBC Ambush" tonight. The network proved him right, once again.

FYI: The lady who had a question for President Trump at the 57min15sec mark is labeled as "controversial" by Twitter this evening. (She's a Trump fan, and the videoclip of her interacting with the President is being circulated on Twitter.)
Example: twitter.com...

As you know, there was supposed to be a Trump vs Biden debate tonight, but the Democrat-controlled debate committee wanted it to be "virtual", due to concern over candidate Joe Biden's frail health. President Trump refused to participate in anything other than an in-person debate, so it was cancelled.

Which is just as well, because the man who was to host tonight's debate, Steve Scully, was indefinitely suspended from C-Span earlier today.

Scully falsely claimed that his Twitter account was "hacked", after it was discovered that he was using that account to contact a former Trump administration official (Anthony Scaramucci) in an attempt to dig up something negative about President Trump.

He apparently wanted to use whatever he learned against the President, in what would have been tonight's Trump vs Biden debate. (Debate 2 of 3)

Here's an article about what Scully did, and his suspension today: www.foxnews.com...

posted on Oct, 15 2020 @ 11:22 PM
link
The masks slow the spread, that has been shown all over the world now. But still, the more you wear the mask, the more you are in public places where you can get infected. You can even get it from opening a box from Amazon sent UPS. This virus is very transmittable, we are not going to stop people from getting it and the vaccine estimates are coming in at effective rates of fifty to sixty percent. Even if we get the vaccine, we should wear masks and do social distancing. Once you get it, you probably have some immunity, research shows three months, but it is limited by the fact that it has only been out there for six months or so, we may have a year immunity, we may have lifetime immunity and some people may not get any immunity if the metabolism or chemicals added to food destroys the antigens.

I am not afraid of this virus, but then again I am older and I am not worried about dying, it is all downhill from here anyway. I don't want to wind up in a nursing home or having myself being a burden on my family or wiping out everything I worked for and giving it to the medical industry....I would rather die in my sleep before that happened.

I don't want to spend the rest of my life I have living in fear, the reason I wear a mask when in public is to protect others and because I hate even having a cold because being sick sucks, I have too strong of an immune system and it hopefully will kick this viruses butt right away and I won't have a problem. Fear disrupts our immune system function too, it causes it to act inappropriately that can either cause it to dump it's chemicals leaving a deficiency of chemicals or it can increase the risk of it to overreact and kill us.

Fear mongers piss me off, they do more harm to people than help them.

shooterbrody
+1 more
posted on Oct, 15 2020 @ 11:25 PM
link
a reply to: rickymouse
Gee
I thought the cdc just said the other day:
CDC guidance on masks has clearly stated that wearing a mask is intended to protect other people in case the mask wearer is infected. At no time has CDC guidance suggested that masks were intended to protect the wearers

I've listened to about 5 minutes and this broad deserves a slap.
Talking over him, putting words in his mouth, cutting him off...
I don't understand why these twits think they can talk so disrespectful to the God damn president.
With a little luck, she will be fired by morning.

originally posted by: rickymouse
The masks slow the spread

posted on Oct, 16 2020 @ 12:53 AM
link
Stupid post so a guy has a cold you are standing 2 feet from him in a close room .
One you have a mask he sneezes in your face two you do not have a mask and he sneeze's in your face and Trump really pushes the mask dont help at all LOLOL .

Go get sick if you want most people will ware a mask when in enclosed spaces fact IS the rates people are getting it have dropped .

Trump is FULL of garbage it takes a amazing streach to go from NO MASK miens you have less chance of getting a virus .

Breathing in toxins makes you sick. This includes re-breathing things your body was made to expel. It’s not a stretch, and the numbers prove it.

Your scenario is ludicrous.

And no, masks don’t change the trajectory of cases. In fact, in some places like Hawaii, cases exploded after mask mandates. And as the CDC HAS REPORTED, you are much more likely to contract covid if wearing masks almost or all of the time.

The lower the number the more significant. The higher, the less. Read about it.

posted on Oct, 16 2020 @ 01:23 AM
link
a reply to: midnightstar
So nobody touches their face before giving it a full wash after going out in public?? And you admit that you yourself have always fully washed your face every moment of your life after returning from going out in public??? When are you going to listen to the fact that it is foamites that are the primary vector for respiratory viruses and have akways been so, not mofos sneezing in your face. How many colds have you caught in your life, and how many came after being directly sneezed in the face??

The fu ny part is how predicatable your answer will be. One of three or a combination of 2.
Completely ignore the question and pretend you were not forced to actually think and realize what i said is true.
Simply repeat the same horse manure propoganda that continues to be disproven with supressed data the media terrorists refuse to publicize.
Make an emotionally charged statement about our callousness and indifference towards others.

Let me help explain that mask data to you and why the perma maskers actually get infected at a higher rate. It becomes the one constant surface that is touched multiple times all day by the wearer as they carry on their day making contact with every other public surface imaginable from door knobs to store shelves to walls and cojnter tops table tops chairs faucet sinks etc.. Etc..
Most perma maskers in fact utilize the same mask all day and several days in a row while parroting the same ig orant tripe you repeat.
"When someone sneezes in your face when someone zneezes in your face!!!"
Please tell us all how often in a given year a stranger had sneezed in your face?? Here is another question you will predictably give either a non answer to or ignore.

posted on Oct, 16 2020 @ 05:57 AM
link
Anecdotally, I work with the public going to multiple facilities in a week. Several of them have been covid "hotspots" of thirty or more people sick. People I know personally have gotten it. From my experience, the people who have gotten covid have been, more often than not, the same people who strictly wear the masks and use sanitizer. The half-@ssers who pull the mask down/off every chance they get don't get sick.


originally posted by: rickymouse
The masks slow the spread

That could be for a whole host of reasons not directly related to the mask itself though.

How often do you see people wearing the mask wrong, like under their nose?

How often do you see people with masks not social distancing?

How often do you see people with masks touching their face constantly for whatever reason?

And that's before we get into the debate over how effective cloth isn't at stopping viral particles going and coming. I got a cold last week and I pretty much wear masks where they are required. The only place I don't is in the aerobics studio where we all have space to spread out to work, but none of the rest of the ladies there do either -- and we're talkin' some grandma age gals there (one tough ol' bird is in her 80s).

Yeah, sounds a little rediculous when you say it that way though.

They should have reduced restrictions in the beginning of the summer so people would get it during a time when other seasonal viruses were not infecting us so much. But they just postponed the second wave to make it so we will get more viruses at the same time, meaning no lives will be saved because the people who are fearmongering messed up. I blame the severity of this next wave on the ones running the show at the state and Federal level.
edit on 16-10-2020 by rickymouse because: (no reason given) 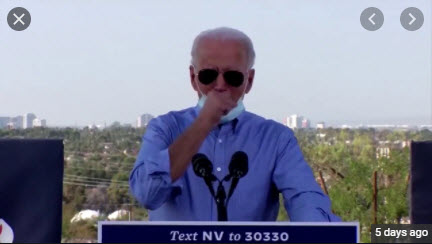 
The masks slow the spread, that has been shown all over the world now.

I disagree, there have been many studies that showed no change in spread with the kind of masks used.
It seems pretty clear that even the politicians are touching the masks all day, showing them into pockets and touching surfaces as they pull them up and down.

it is highly possible the masks are actually making matters worse, people have stopped focusing on hand washing.
The other day I saw a video where Biden lifted his mask coughed into his hand and put it back up.

There are many studies around the world that show it does not help.

The masks slow the spread like The Emperor's New Clothes are beautiful. Somebody, many people, have drunk gallons of the Fauci Kool Aid.

People should consider wearing masks all the time for the rest of our lives.. if they are effective at helping us stay free of Airborne diseases.