posted on Oct, 13 2020 @ 05:01 PM
link
Really, you couldn't just pull out one from the thousands that appeared outside Trump's Blexit event last week?

An account featuring the image of a Black police officer, President Trump, and the words “VOTE REPUBLICAN” had a brief but spectacular run on Twitter. In six days after it became active last week, it tweeted just eight times but garnered 24,000 followers, with its most popular tweet being liked 75,000 times.

Then, on Sunday, the account was gone — suspended by Twitter for breaking its rules against platform manipulation.

The remarkable reach of @CopJrCliff and other fake accounts from supposed Black Trump supporters highlights how an account can be effective at pushing misleading narratives in just a few days — faster than Twitter can take them down.

Seriously? Kanye West, Candice Owens to name a few. As a matter of fact, Trump's support has actually increase among black supporters as well, so why the difficulty? 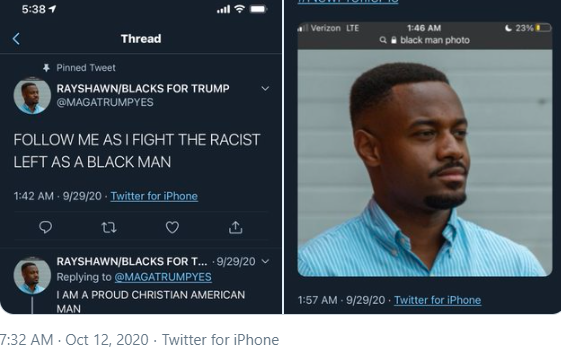 I just did a 'black man photo' search on google myself and this image was the first result.

Look, I get it. We get close to the POTUS elections and things are bound to get dirty right up to the last minute for voting. It's almost just part and parcel of our political process these days.... but between this, the GOP admitting to placing fake ballot boxes in California and conservative operatives sending out fake robocalls, it's getting a bit too dirty and messy to be ignored.

Is he not supposed to have 95% of the black voters in tow by the end of the first 4 years?

Every bit helps I guess.

Assuming Trump gains the same support as 2016, plus the additional black votes, he should then perform better this time around.

This is all unnecessary.

I mentioned this on another post. Some of them did not even crop the "black man photo" label or other labels out of the photos. They of course used just other people's photos as well, even though those people had active social media accounts. They are getting desperate and lazy, or they were not paid enough rubles.

Personally, i don't imagine many African Americans will be supporting Trump at the ballot box.

Certainly, nowhere near 95% anyroad, which was what he claimed was it not?

originally posted by: Southern Guardian
Also... 'RAYSHAWN'....?? could there be any more of a stereotype name for a black man?

The Russian bots are back.

UKTruth
+16 more
posted on Oct, 13 2020 @ 05:11 PM
link
Leftists haven't realised that their accusations are now rightfully seen as projection.
Yes, it's getting dirty - the Democrats have been setting up cheat by mail and ballot harvesting for months.

The Russian bots are back.

We ALL know there weren't many Trump supporters left on twitter.

Herr Dorsey made sure of it.

" Rasmussen: Black Voter Approval for Trump Has Surged to Over 40 Percent "

posted on Oct, 13 2020 @ 05:19 PM
link
Twitter banned seven of my accounts so far, for no damn reason. Three of them, I never even tweeted, just "liked" stuff from like ron paul. Every time they want me to use a cell phone to unlock it, I tell them I do no own one, and they just keep giving me instructions to unlock with a cellphone over and over until I give up and make a new one.

Leftists haven't realised that their accusations are now rightfully seen as projection.

You understand that these aren't merely 'accusations'?

Twitter actually removed these fake accounts. There's visual evidence right in the OP. Jacob Wohl, a conservative operative, had actually been caught and charged with his fake robocalls. The California GOP admitted to placing the fake ballot boxes and a judge ruled that they must remove it.

Actually pay attention to the OP before you jump the gun to avoid looking stupid.

Twitter banned seven of my accounts so far, for no damn reason.

They banned seven of your twitter accounts? How many accounts do you have exactly? And why do you need that many? Jesus I don't even have a twitter account. Is this necessary?

So much to unpact from that one admission of yours right there.

Well if he takes 95% of the African American votes i will indeed be rather supprised ""admittedly skeptical"" type that i am.

I guess time will tell but that might just be the ""protective glow"" i suppose.

originally posted by: andy06shake
a reply to: Zanti Misfit

Well if he takes 95% of the African American votes i will indeed be rather supprised ""admittedly skeptical"" type that i am.

I guess time will tell but that might just be the ""protective glow"" i suppose.

Trump is Thinning the Herd on the Plantation , and the Peoples are Grateful........

Trumps doing nothing more than playing to his base.