If it’s a pond...it certainly is a nicely somewhat uniformed arc shore line....

Looking from this perspective it.... looks like a pond/lake ?? drops in with a higher shoreline. Lest not forget some of Antarctica ice is melting.... jus saying.

I certainly am not claiming hoax .... I’m merely showing geological topography given what’s seen with google earth... nothing more. You make the judgement..
edit on 12-10-2020 by Ophiuchus1 because: (no reason given)

posted on Oct, 12 2020 @ 05:28 PM
link
Obviously it's a hoax because no way science would completely miss a gigantic flying saucer buried under ice. Only to be discovered online after the ice melts. C'mon.

originally posted by: game over man
Obviously it's a hoax because no way science would completely miss a gigantic flying saucer buried under ice. Only to be discovered online after the ice melts. C'mon.

Because we do not have a answer yet, we just jump straight on the hoax train?
That is no way to treat your human brain.

Yes a hoax, explain to me how science would miss this under the ice.

posted on Oct, 12 2020 @ 05:51 PM
link
a reply to: Ophiuchus1
Imo
It's not a pond, but a melted hole in the ice...unless you mean the whole area being a pond.
Perfectly round melting is common in nature.
Like bubbles.
Even on Google maps you can see where water/snowmelt has run down hill into it.
This video posted has quality reduction and some weird color filter on it that is obscuring the waterflow into it.
Pretty scammy.
The pic really takes a disc shape when you flip the entire image like they did.
The actual sat image in north to south view doesn't even pop out as a disc.
The ring around the "craft" is probably the section of the lake/ice hole/water that is throwing out a dark hue. Darker than the snow because it's nearly clear as it melts and takes on the waters darker(vs snow) hue.
Still cool to see possibly anomalies in Antarctica..It's a mysterious place with suspicious activities and creepy stories.
...like hollow earth nazis

originally posted by: putnam6
what are the co ordinates. video alone makes it suspect

If you view it facing north, it loo,s like a circular pond.
It's 21 meters across, so it's not that big.
A lot of critical detail is lost on the pixelation in that image.

originally posted by: Mandroid7
a reply to: Ophiuchus1...Even on Google maps you can see where water/snowmelt has run down hill into it.

posted on Oct, 12 2020 @ 06:30 PM
link
I ran the image through the wash a couple of times. After the first run I noticed three roundish areas on the object. I ran it again and the areas became more pronounced. It almost appears as though we are seeing three of four features nearly radially equidistant from each other. At least the part we can see appears to be. Interesting... 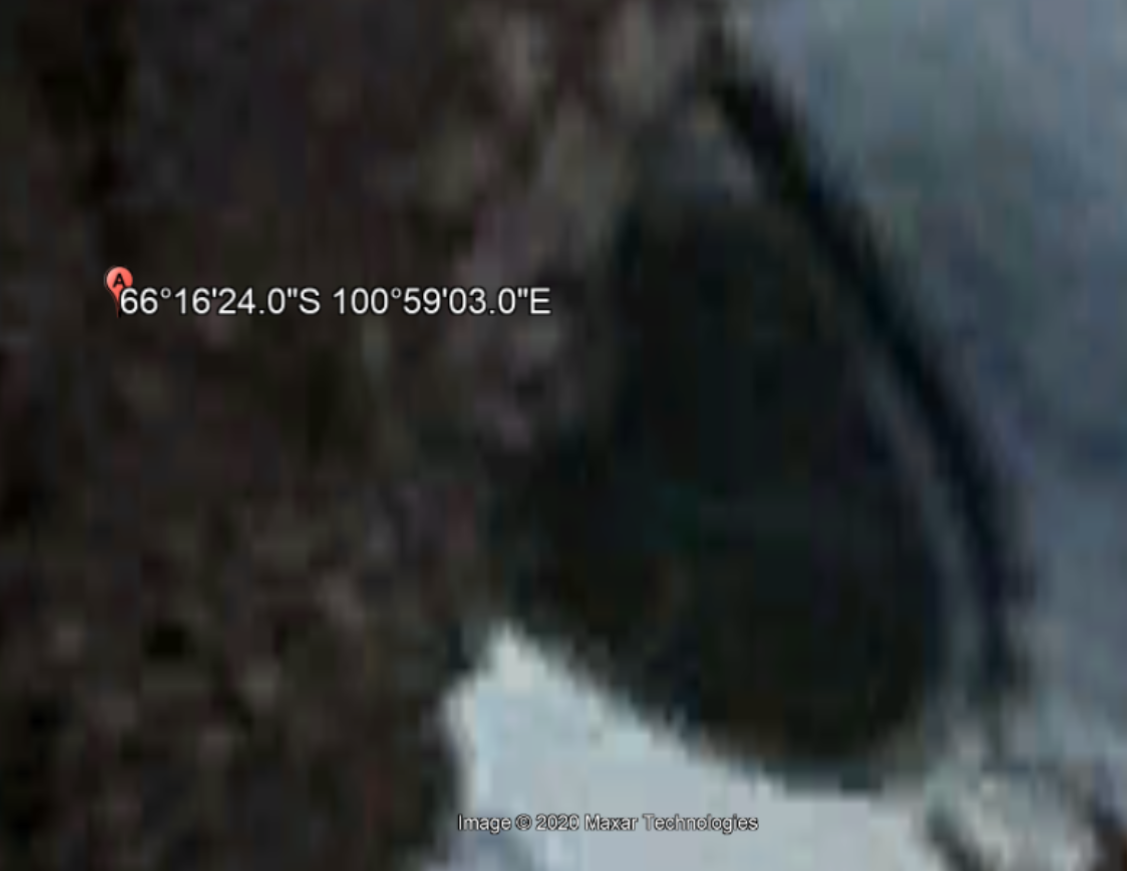 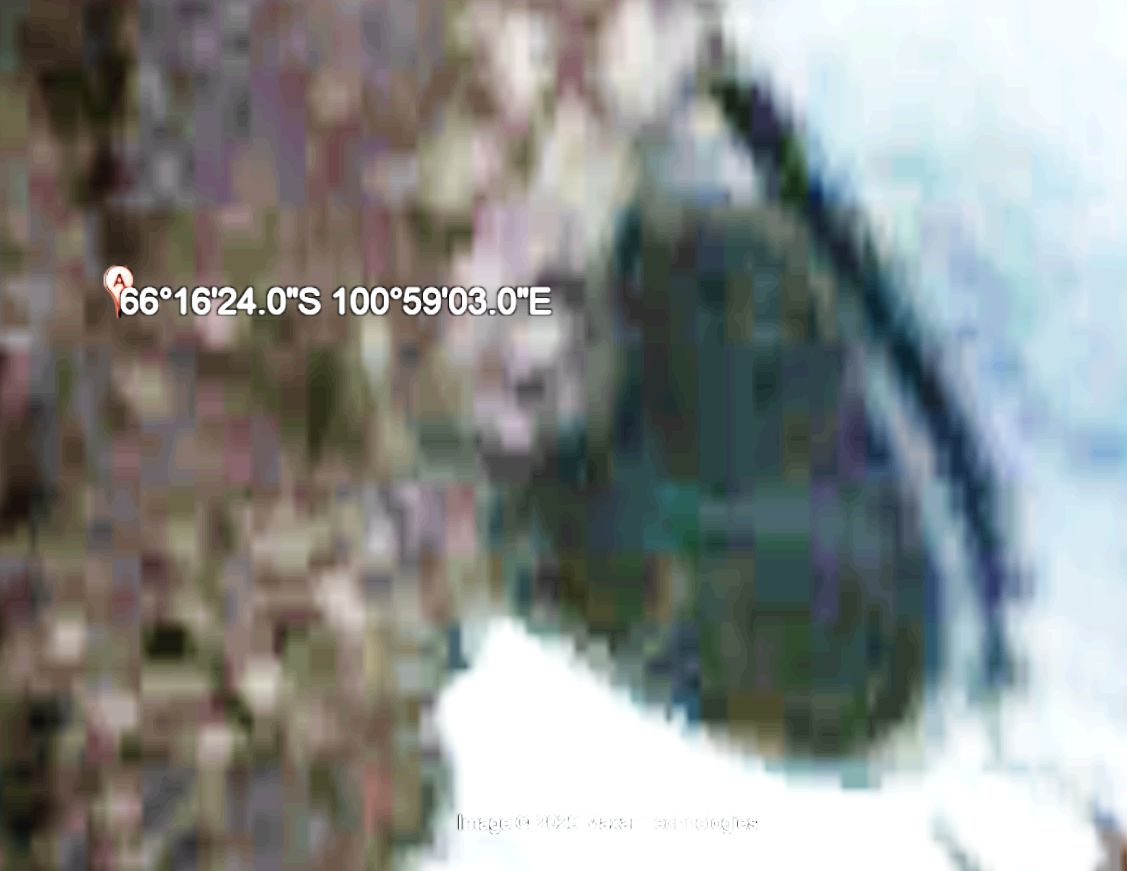 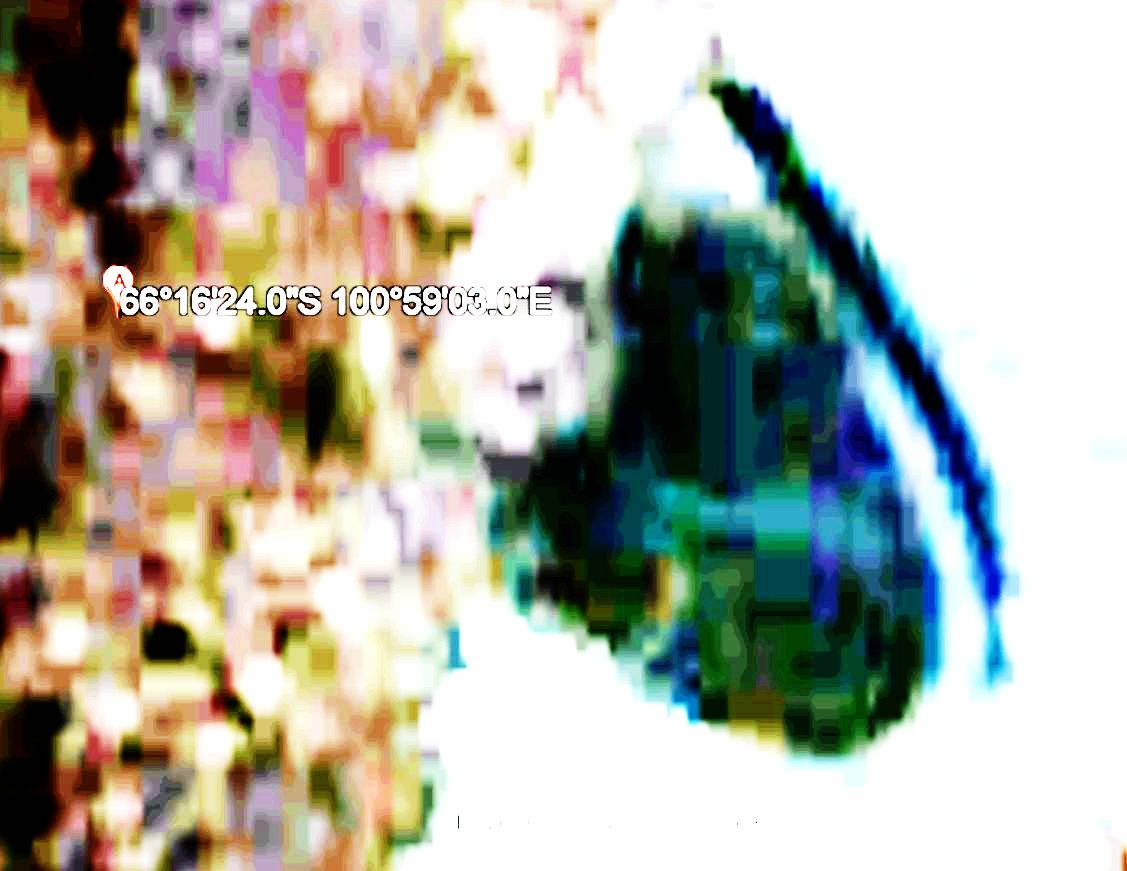 posted on Oct, 12 2020 @ 06:41 PM
link
If it's natural it's a pretty frickin' perfect circle. It looks man-made to me but not necessarily extra-terrestrial. I looked at it from different angles in 2D and 3D GE and it does not look like a natural anything.

originally posted by: Mandroid7
a reply to: putnam6 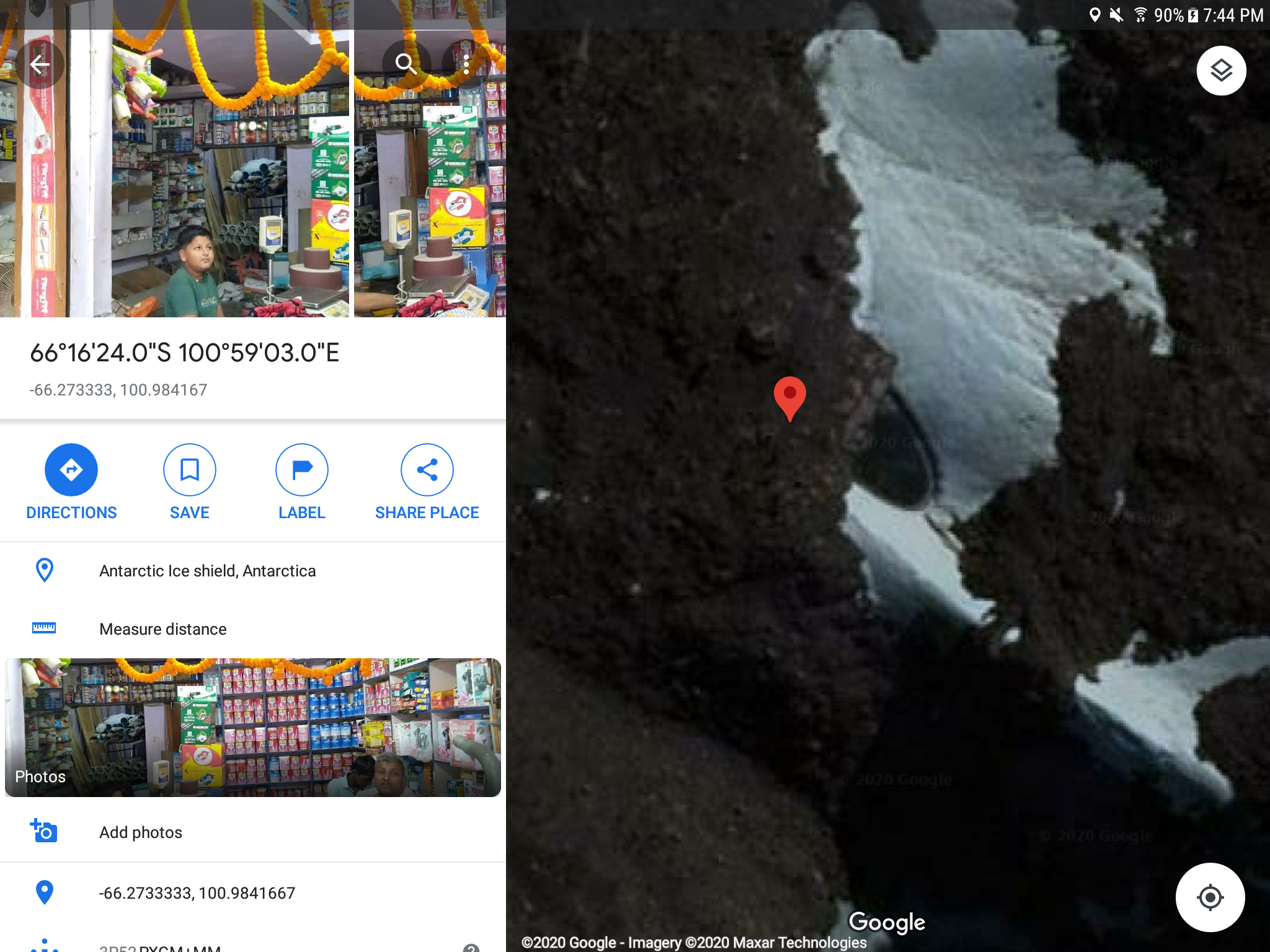 Thanks for the coordinates, extremely helpful.

Why would aliens fly on a spacecraft which has mass? Simple question.

Any spacecraft with mass would be bound by the laws of physics and relativity. In other words, it would take them EONS to get from one place to another, generations.

No, any REAL alien craft will have no mass. Quantum physics won't help here either, folks.

Aliens may well be here already, but we don't see them, know them or even perceive them. Why? Because they have no mass. They are just energy life forms who are able to take advantage of things like what we're currently seeing in the quantum physics sector (which I take complete exception to, but that's another thread).

Aliens didn't travel to earth on "flying saucers", silly rabbits...tricks are for kids!


originally posted by: Mandroid7
a reply to: Ophiuchus1...Even on Google maps you can see where water/snowmelt has run down hill into it.

Until an expedition.... no one will ever really know, huh?


That's mental, at the other pics I was like "that's definitely a metal disc"

Perspective is a b1tch 😒


originally posted by: Mandroid7
a reply to: Ophiuchus1...Even on Google maps you can see where water/snowmelt has run down hill into it.

Until an expedition.... no one will ever really know, huh?


This is the correct orientation and aspect. It is a pond. The shadows are correct and if you look to the north (by changing your angle upward toward sky), you will see the ocean in the same horizontal aspect.

One could say that what’s to the left of the red line is a rocky hill in the foreground.....the red arrows point to a ridge line of a hill snowy/thawed overlooking and down to the what I’m calling a shore line. You can now say that the dark area, perhaps of water with possibly shallow thawed ice over it, is as you see it...but what you don’t see is the rest of the dark area from behind the rocky hill on the left of the red line...If that’s the case...then nobody knows what the rest of the dark shape looks like. It could extend to varies irregular shapes as bodies of water trapped inland would do. Imo...

posted on Oct, 12 2020 @ 07:07 PM
link
Look at where the shadows are. Look at the ice freezing around the edge of the obvious pond of water. Look at the channels where the water is entering the pond. It's obvious this is not a disc with a shadow beneath it, just from the other shadows.

I don't see a hoax, just wishful thinking and no sense of what shadows mean and failing to notice the ice around the edge of the water is visible. Spinning it around to create an illusion does not change anything.

How many times has this one been debated?

posted on Oct, 12 2020 @ 07:11 PM
link
I was going with > sediment covering an ice-shelf,
which naturally forms when melting.
However . . . it just seems too round to be natural.
*don't know*
ATS will have to assemble a squad for
an expedition to find the answer.

originally posted by: Macenroe82
Can anyone choose a different date in Google Earth?


There are only three photos for that area. The older and the most recent one have cloud coverage and almost nothing is visible, so this is the only good(ish) photo Google Earth has of that area.