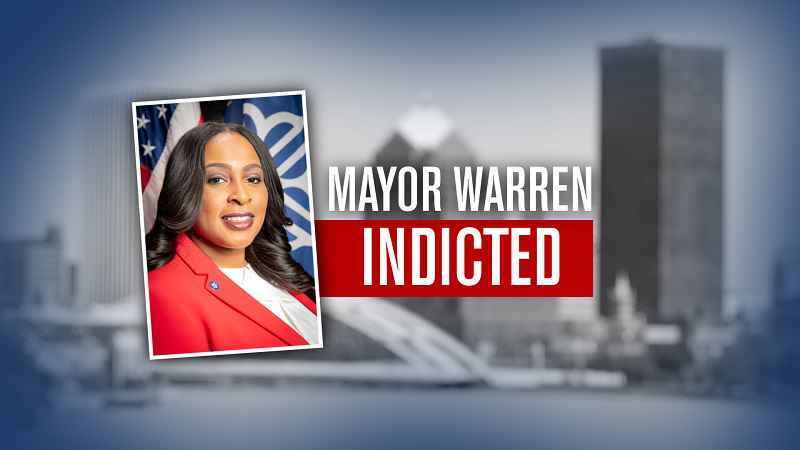 The mayor of Rochester NY who encouraged rioters to riot and called for defund the police has been indicted on felony campaign finance laws including scheme to defraud. Hopefully she cooperates in identifying the spies and foreign agents leveraging her to be placed in a sensitive position to further the communist globalist agenda.

Monroe County District Attorney Sandra Doorley announced that Mayor Lovely Warren was indicted on two felonies, including scheme to defraud in the first degree and violation of election law related to her last re-election campaign.

The AP reported, “The indictment dramatically increases political peril for Warren, who was already facing calls to resign for the city’s handling of the suffocation of Daniel Prude. The Democrat is midway through her second term as the first female and second Black mayor of Rochester, a city of more than 200,000 by Lake Ontario.”

Elections officials began fielding complaints about Warren’s campaign finances in 2017, when Warren defeated two challengers in a Democratic primary prior to her reelection. In March, the state Board of Elections presented Doorley with a 35-page report “that found considerable evidence” that Warrren, Jones and Brooks-Harris may have violated the law, the prosecutor said at a news conference.

Warren’s arraignment, on charges of scheming to defraud and violating election laws, was scheduled for Monday. If convicted, she could face a maximum of 16 months to four years in prison and removal from office.

edit on 10-6-2020 by worldstarcountry because: stupid typo in the title, one missing letter for Pete's sake

Just one of many more corrupt dominoes to fall, one hopes.

I'm not convinced Warren will collect her pension and ride off into the sunset but a quick Google search (wiki) of American state and local politicians convicted of crimes has me flabbergasted.

I'd list them but I'd run out of characters to post. $hitheads and corruption on both sides (mostly the left). It's disgusting.

posted on Oct, 6 2020 @ 02:18 PM
link
I wish they would bust all the high ranking public officials who are gaining power by corrupt means.

But, who would we have to vote for on election day then?

New York and California and Illinois are cesspools of corruption


Didn't see the sarcasm bit there.

This kind of reminds me of the Councilwoman from Pittsburgh a few years ago. She kept accusing the Police of arresting too many blacks in her district. She said "85 percent of the people arrested in my district are Black." When it was pointed out to her that 96% of the people IN her district WERE Black. She didn't want to hear it. I think she should be getting out of jail soon. Funneling City money to her brother-in-law for studies that were never done doesn't work.

Yea, I got a text today from "blabby" from moveon.org from a Chicago phone number; 224-267- 9413. They quoted Michelle Obama and said to get out and vote Trump out. I texted back that Monique Jo_ _ _ hasn't owned this phone number since I was assigned it in July 2018. To date I get over 60 calls a year from bill collectors looking for Monique. I finally started talking to them and provide the known location of Monique who continues to use this phone number either when she bounces a check or uses a credit card as I know she used this number in July 2019.


And that is exactly how it will be spun.

Michelle is on the circuit today, defending an extremist
three letter organization.

She does accuse all of racism if they do not support
these burn loot and murder extremists.

originally posted by: Irishhaf
So what will happen... shut up and do her time, flip and spill some beans, or get arkancided before she can spill the beans.

There are too many that are about to get indicted to keep arkancide under wraps.....

Possibly that's why US DOJ announced today Wednesday 10-7-20 the indictment of ISIS terrorists. This could be a veiled threat to the Obamas.

They coined the press conference "National Security of the United States"

I truly and honestly hope so...

But I have been hoping for that for some time now and keep getting disapointed.

Good. Now let's get the rest of these corrupt bastards!