Paradise Lost: For Want of a Water Jug - WRITE-OFF

posted on Oct, 5 2020 @ 10:52 AM
link
Everything I could possibly want. The old stage coach station jail-house with half a roof, enough to block the rain. All the cactus I cared to eat.

Wide open spaces with no one in sight. Water proofed matches for fires on cold nights. Fish hooks a plenty along with line. Rock bass in the stream down the mountain. Not to stay down there though, where the people are, with their law and wanted posters. Wish I had a water jug for those night runs.

The stream bed up here not totally dry. Dig a shallow hole for the water to pool. I look longingly at the spring with its clean fresh water, while I sip dirty water from the cup of my hand.

Why must it be surrounded by poison oak? My bane. My kryptonite.

Two weeks of drinking dirty water is enough. I'm leaving this almost paradise. Down the mountain to the other jail. The one with the complete roof. 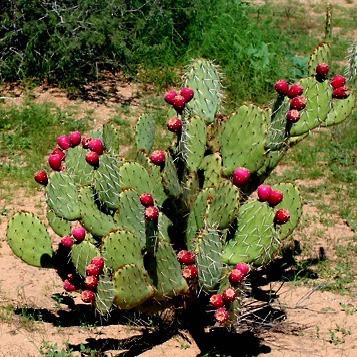 edit on Mon Oct 5 2020 by DontTreadOnMe because: mod edit...the end

Excellent story bud !
One man's exile, is another man's prison.

Am left wondering why the protagonist was staring at the clean water, while drinking the dirty water ?
Is it because the spring was way down the mountain, but he could see it from his vantage point ?

Is it because the spring was way down the mountain, but he could see it from his vantage point ?


The spring was feeding the almost dry streambed. So yeah, he was looking at the spring from a safe distance while drinking the dirty water.

If he had had a water jug, he could have carried water from the stream at the bottom of the mountain.
edit on 5-10-2020 by pthena because: (no reason given)

I once drank from a spring and it had the sweetest taste too. Came home from the camping trip only to wake up with my eyes sealed shut, I was unable to open them as if they had been glued that way.

Once I was able to slowly spread my eyelids open I became aware that a whole lot more was going on. My face was like a over-filled balloon, I did not look human. My skin was looking like some flesh-colored marshmellow. And yes... being who I am I quickly grabbed my videocamera (remember those?) and shot footage of my Alien-looking face.

I remained that way for several days. After a return to the area several weeks later, we found that just above about 50 feet from where we were drinking from the spring was literally a forest of Poison Oak growing in and around the spring.

On a roadtrip to Idaho to do some mineral exploration and we pulled over to spend the night near a nice little brook. Since it was already dark, we simply gathered up what little dead wood and brush was nearby and made a fire. Woke up about 4am in the morning and was having trouble breathing.

Once the Sun came up, we scanned the area we had pulled over at and it was in fact another Poison Oak forest and everything we were burning the night before was dead Poison Oak. So all the time that the wind kept blowing that smoke in my face, I'd inhale the urushiol (yur-oo-shee-aal) oil. I learn't later that many folks have died from complications of breathing in Poison Oak smoke, really messes with the lungs.

Yeau... Me and Poison Oak don't get along. All I have to do is look at it from a distance and I catch it. And now some 20 years later I learn that DAWN dishsoap will wash it off quite effectively. But I'll still steer clear the best I can fro it.

All I have to do is look at it from a distance and I catch it.


During the flowering the wind blows the pollen.


With a high enough allergy it will kill.

Once upon a time the Butterfield Overland Mail in California (1857-1877), had a spur line running West from the Laguna Mountains. The protagonist was born in a house on the main street of a town that grew up on the Westernmost loop of that spur line.

One day he got the idea in his head to go East, toward the Laguna Mountains. Along the way is a long forgotten ruin of another stage coach station of that same once active spur line. A rather ghostly place; not big enough to be called a ghost town.

It was a pleasant place to visit, but not suitable for re-inhabitation due to the poison oak. 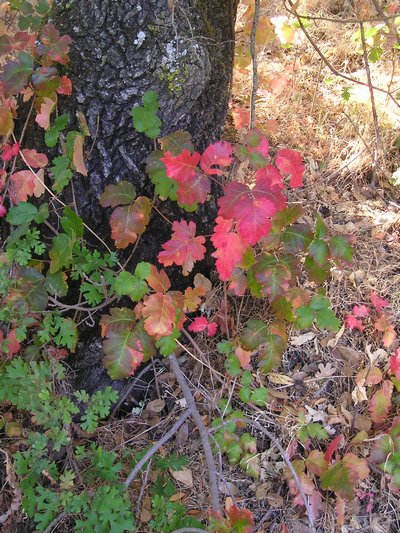 Upon further reflection: I do believe that had the protagonist not seen a certain movie, he may have not had his wonderful adventure.


It was a pleasant place to visit, but not suitable for re-inhabitation due to the poison oak.

I want to say that I almost started itching after viewing that pic of yours!

My Father and I camped a bit while I was growing up and he ingrained into me this; "Leaves of three, let them be"! Meanwhile about a week and a half before our going camping, he'd start taking these small little tablets from the Drug Store that had small amounts of the Poison Oak Oil and would build up his immune system.

When I was very young I would never get the rashes, but my Mother who washed our clothes would get it from (mostly) my pants. I was the adventurous one, always trudging through the forest brush with not a care in the world just enjoying the experience of blazing a trail.

As I got into my teens everything changed and I would break out something fierce with rashes. Won't go in to any details, but imagine everywhere you touched on your body getting the rashes.... yeau, not fun. Then there's this weird feeling you get when you take a hot shower and it hits the rash... hard to describe the hyper-sensitive feeling.

Yeau, I hate Poison Oak.... frightened more of it than the Coronavirus.
Johnny

Then there's this weird feeling you get when you take a hot shower and it hits the rash... hard to describe the hyper-sensitive feeling.


Back in the old days, before cup holders, I was waiting in the car for my mom to come out and drive me over to the doctor's office.

She came out with a fresh hot cup of coffee and set it on the dashboard and started backing down the very steep driveway. The cup slid off and dumped the steaming hot coffee all over my thighs. She freaked out, "Oh my God! I'm so sorry! Are you okay?"

"I'm just fine. Don't worry about it." I replied, without describing the feeling.