posted on Oct, 4 2020 @ 12:24 PM
link
A year ago, this alternative planet nine hypothesis was launched and picked up by popular science magazines and sensation seeking papers alike. I thought it was an amusing idea and moved on, knowing it would take a while to have the equipment to prove or rule out the slight chance it could be true.

For nearly 5 years, growing numbers of scientists have blamed the weird orbits of distant solar system objects on the gravitational effects of an as-yet-undiscovered “Planet Nine” that lies in the icy realm far beyond Neptune. 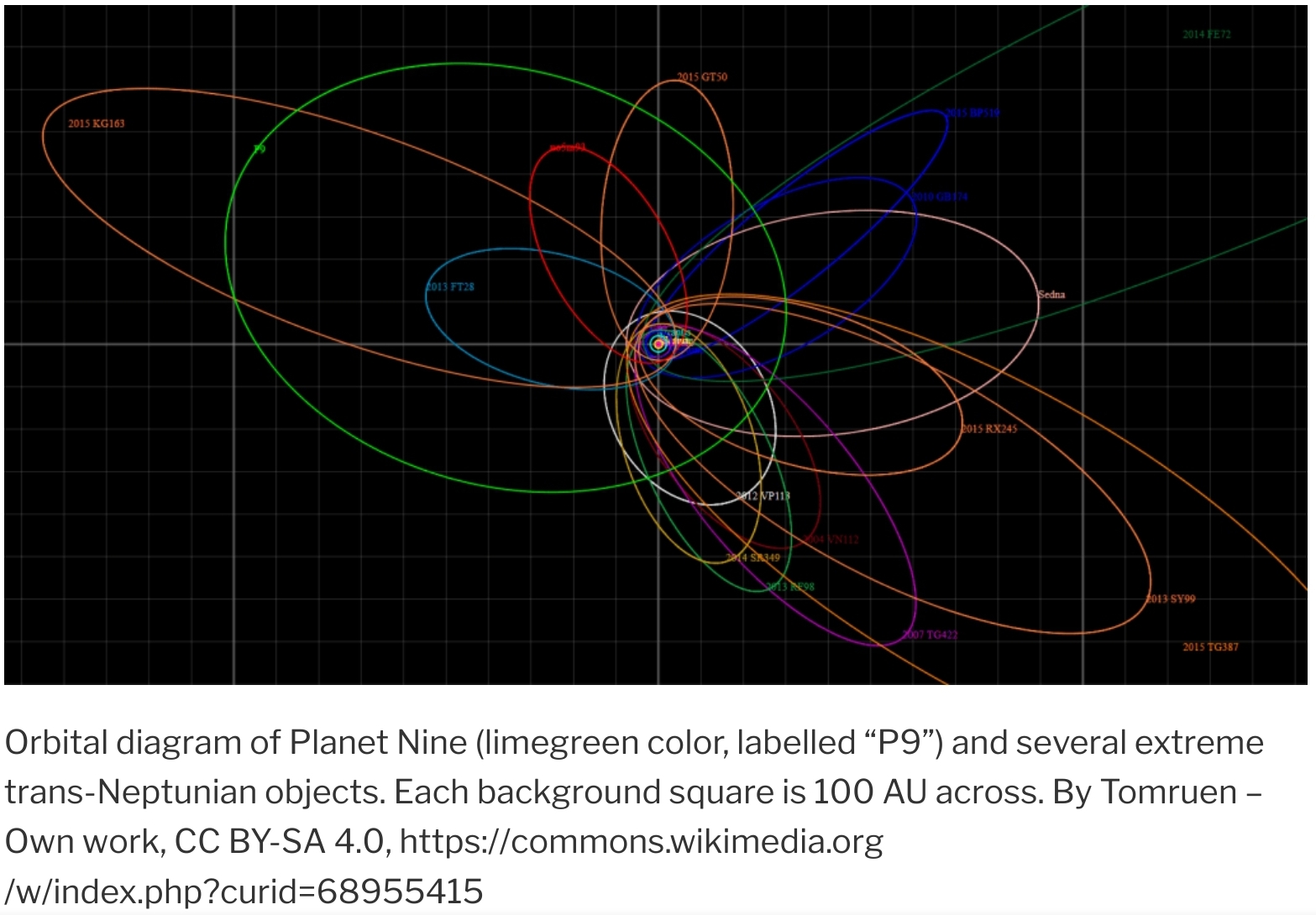 Previous studies have suggested Planet Nine, which some astronomers refer to as “Planet X,” has a mass between five and 15 times that of Earth and lies between 45 billion and 150 billion kilometers from the sun. At such a distance, an object would receive very little light from the sun, making it hard to see with telescopes.

To detect objects of that mass, whether planets or black holes, astronomers can look for weird blobs of light formed when light “bends” around the object’s gravitational field on its journey through the galaxy. Those anomalies would come and go as objects move in front of a distant star and continue in their orbit.

But a pair of physicists is now floating an intriguing idea that could offer a new way to search for the object: What if that supposed planet is actually a small black hole?planet-nine-may-actually-be-black-hole

A black hole with a mass between 5 and 15 time that of earth would have an event horizon the size of a grapefruit, most articles claim.

A short wiki on microlensing:


With microlensing, the lens mass is too low (mass of a planet or a star) for the displacement of light to be observed easily, but the apparent brightening of the source may still be detected. In such a situation, the lens will pass by the source in a reasonable amount of time, seconds to years instead of millions of years. As the alignment changes, the source's apparent brightness changes, and this can be monitored to detect and study the event.
Wiki

A few days back I stumbled upon a article about LOFAR. It was lining a story about a few cases where quasars had been found twinkeling like stars seen through earths atmosphere.

Radio observations have turned up evidence of a cloud of hot plasma near — or even in — the solar system. But its distance estimate is still up for debate.

Researchers didn’t observe the mystery cloud directly. Instead, they saw its effect on the radio waves of a background quasar known as J1402+5347. Its presence caused the quasar’s light to flicker on a timescale of minutes. “It’s a spectacular twinkler, and a very nice surprise,” says Mark Walker (Manly Astrophysics, Australia), who studies intra-hour variability of quasars but wasn’t involved in the new work. 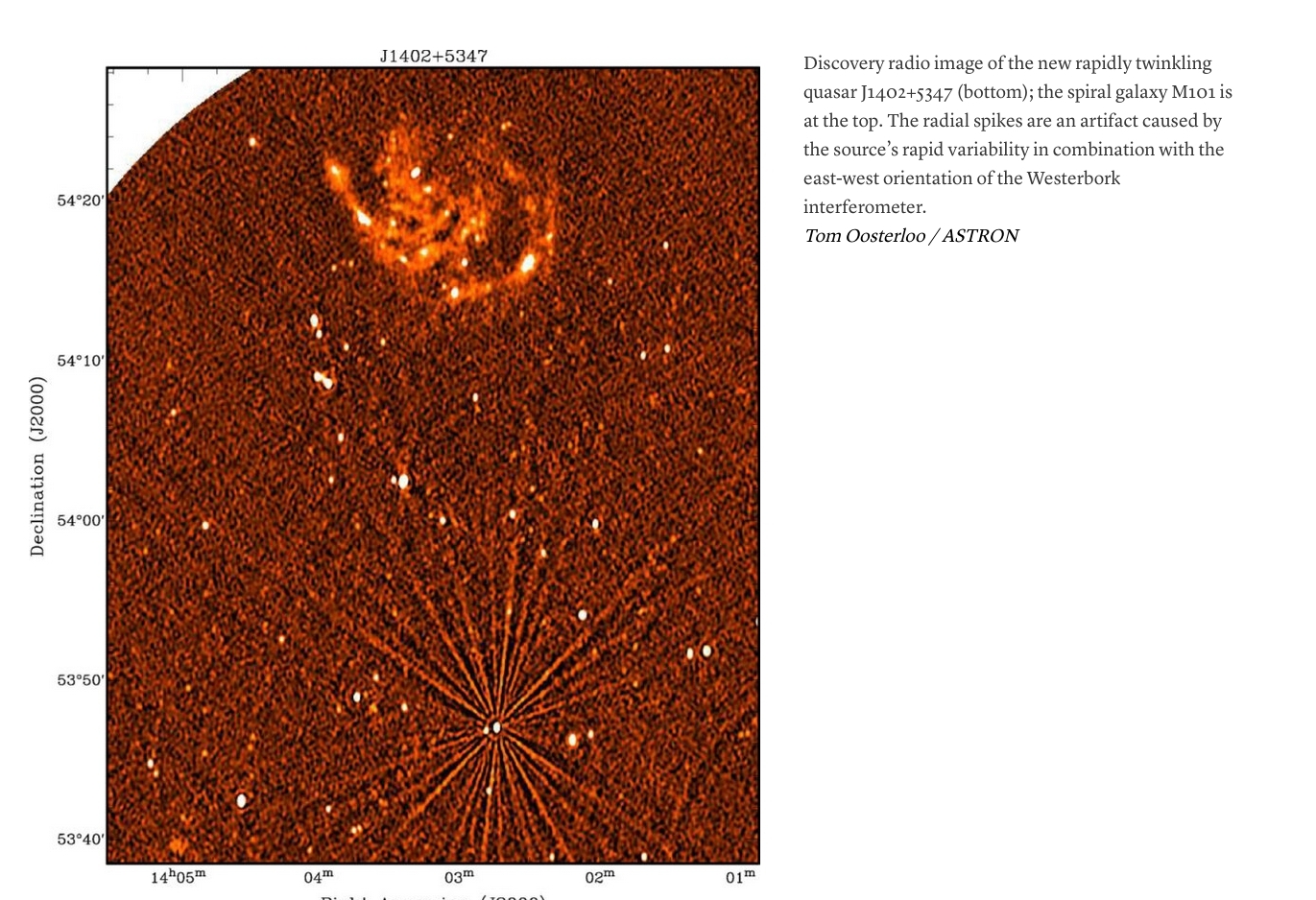 Until recently, astronomers knew of three rapidly twinkling quasars, whose scintillations suggested the presence of plasma clouds at distances of a few tens of light-years. But the new cloud is much closer, says study lead Tom Oosterloo (ASTRON Netherlands Institute for Radio Astronomy).

Now, I know there are multiple things that can cause the twinkle and it is  stretching a stretch beyond its breaking point connecting the observed anomaly to a (theorized) primordial black hole, but I can see a black hole the size of a grapefruit have enough hot plasma swirling around it to twinkle a quasar for a few minutes when it passes between an observer on earth and the feasting beast being observed.

How cool would it be to have our own little black hole to play with.

originally posted by: D.Wolf
How cool would it be to have our own little black hole to play with.

'Disposing of evidence' would be #1 on my list of things to do with it.


originally posted by: D.Wolf
How cool would it be to have our own little black hole to play with.

'Disposing of evidence' would be #1 on my list of things to do with it.

Just disposable purposes? Hell, I'd venture in and see if the rumors about DB's ---

Actually, never mind. Maybe some questions are best left unanswered. I have a feeling it would work out to be living through a really bad sci-fi B movie.

Its a worm hole to alpha centauri b. And you thought a black hole is cool .

Its been talked about that the planet 9 is really a brown dwarf, or that it collided with another planet thus forming the astroid belt between Jupiter and Mars, sending its moon Mars into its own orbit and what was left of it formed our moon. I forgot where I read that, interesting none the less.

Christopher Nolan predicted the same. Our future selves creating a wormhole near Saturn to save Earth from the blight.


There is only one way to ensure mankind's survival: Interstellar travel. A newly discovered wormhole in the far reaches of our solar system allows a team of astronauts to go where no man has gone before, a planet that may have the right environment to sustain human life.

According to wiki...22 micrograms


Minimum mass of a black hole

In principle, a black hole can have any mass equal to or above about 2.2×10−8 kg or 22 micrograms (the Planck mass). To make a black hole, one must concentrate mass or energy sufficiently that the escape velocity from the region in which it is concentrated exceeds the speed of light.

originally posted by: TheConstruKctionofLight
a reply to: Gothmog

According to wiki...22 micrograms


Minimum mass of a black hole

In principle, a black hole can have any mass equal to or above about 2.2×10−8 kg or 22 micrograms (the Planck mass). To make a black hole, one must concentrate mass or energy sufficiently that the escape velocity from the region in which it is concentrated exceeds the speed of light.


That IS NOT describing a self-sustaining black hole .
Do more research

Seriously what am I missing? By you saying self-sustaining does that mean wiki is wrong? Help me understand where I have misinterpreted