It's too much of a coincidence Trump was infected in October

originally posted by: olaru12
trump has been campaigning and fundraising nonstop, coming in contact with literally thousands of republican that reject the covid protocols because trump wants everything to look normal for the cameras....but it's the democrats fault.

Sounds like a rightwing rrreeeeeeeeeeee to me. The GOP used to be the party of personal responsibility, what happened?

Its a conspiracy site... duh..

In real life we still leave it up to the left to freak-out every moment they can. If you think about it, ALL the chaos going on is 99% liberal created. So calm down you guys are still the champs.


So is Trump infected ? Does Trump have the virus ? What`s going on ? Could they provide maybe some valid scientific results that actually shows proof.

Two of my workers wives who have been isolated since Mar and both tested positive at the hospital. One was having a baby and the other has serious medical conditions and was being treated. It is policy to test everyone coming in no matter what and both came up positive. Days later the baby, dad, siblings all tested negative in both cases and both wives have zero symptoms.

So what is up with that? I wonder if it is a money thing for the hospital to have positive results for patents that stay their.

originally posted by: njd2025
a reply to: Daughter2

Hope Hicks is hot. She's a close "adviser" to the president. Hmmmmmm.....

If we only knew truth!


I think they ruled out Hope as being too soon to be testing positive if it was her.

The test can give both , positive and negative in same day , it depends also which test to use.


Flip a coin , to be or not to be..Today is your lucky day and next day you are infected again. I think it was a money issue, at least when they treat patients .

He does wear a mask when deemed appropriate and people are required to keep the 6 feet plus from him even though that might not be 100% possible all the time. Also, anyone around him is tested regularly, so outside of total isolation in a bunker ya the chance is there no matter what.

We know that air conditioning helps to increase the spread of the virus, and Trump has repeatedly been in enclosed air conditioned areas with non mask wearing, non social distancing people. Such as AF1 and AF2.

Actually we don't know...its an assumption, and the assumption is more linked to a house AC that can have a very compact distance of circulation to the person than a building which can be rather large.

I can't confirm this as being true, but the grapevine suggests that it was Hope Hicks who brought Covid into Trump's inner circle. Given that she isn't big on mask wearing or social distancing and isn't taking all that many precautions to stop herself from being infected, it's extremely plausible that she did it by accident. If not her, then there are a lot of other people with similar attitudes to her that are close to Trump.

Maybe, but they are saying it wouldn't be her since the time was too short for her to give it to the President and he showed positive.

One thing everyone is not really looking at is Melania. They both have it so one most likely gave it to the other... Maybe Melania gave it to Trump, and so since we all know they are around each other all the time as all married couples are then you could give the virus to her much easier than Trump and get the same results. I would look in that direction more than who was around Trump.

It appears it was spread at the Rose Garden during the nomination of ACB.

Everyone who is testing positive was at that ceremony.

Interesting no Democrats attended, they refused.

edit on October 3rd 2020 by Daughter2 because: (no reason given)

Here is what the CDC says... Look at medium risk... "Sustained close contact (10 minutes or longer) within six feet of a person with COVID-19 while they had symptoms." 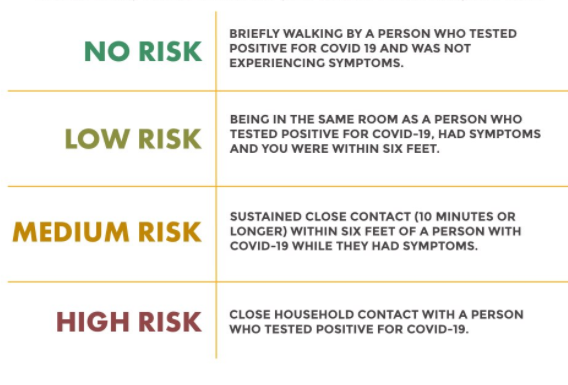 And here is the risk of a lecture type environment such as was there... 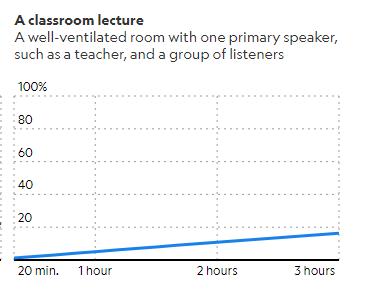 This is why I think they need to look into who was in contact with Melania as it would have been easier to get to her than Donald. I think if there is a conspiracy they gave it to her since she would be high risk for Trump to get it too. 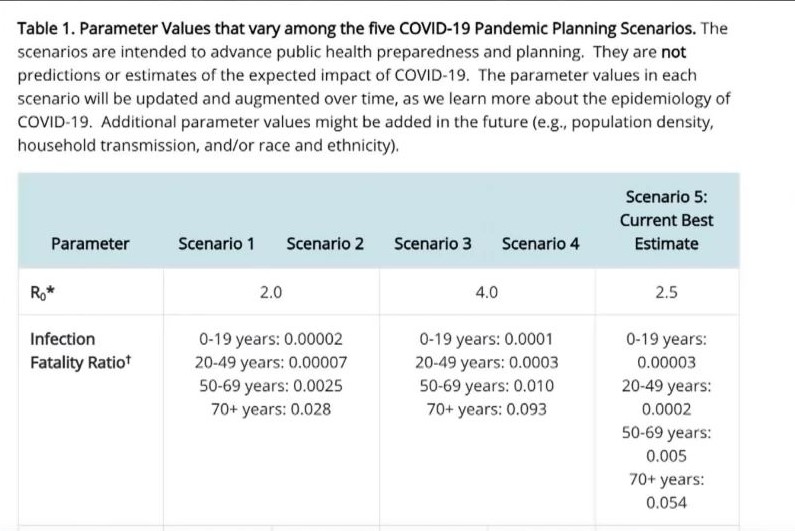 Well it is not just being heavy, it is the conditions that being heavy can help create like high blood pressure, diabetes, breathing problems and so on. I know people that I would call fit fat as they are extremely healthy but over weight. I'm not suggesting Trump is fit fat...lol but he doesn't has underlining conditions either.

The test can give both , positive and negative in same day , it depends also which test to use.


But how covenant it would be for a hospital to test someone positive if it meant fed funds...

posted on Oct, 3 2020 @ 12:21 PM
link
I thought the GOP was the party of personal responsibility. But now it's the dembs fault trump got the covid instead of his no mask wearing unhealthy lifestyle.

posted on Oct, 3 2020 @ 12:26 PM
link
and.......looks like the debate could be added to the possible source list.....I notice the media is mentions end still wonder why there is little noise about media being listed as positive
townhall.com... 413


Officials for the City of Cleveland said 11 cases of the Wuhan coronavirus could be traced back to the Sept. 29 presidential debate. The cases were a result of debate pre-planning and set-up, with the majority of cases impacting out-of-state travelers, particularly debate organizers and members of the media.

One of the journalists was at the White House as recently as last Saturday and had traveled on Air Force One to Pennsylvania since then.

According to a report by the Pittsburgh Post-Gazette, memos issued Friday by the White House Correspondents Association (WHCA) revealed that three unnamed journalists had contracted coronavirus.

Which is partly why my gut can't stop telling me it was an attack on the POTUS and administration, its too convienient and it has really impacted the very inner circle of the White House for the short-term... 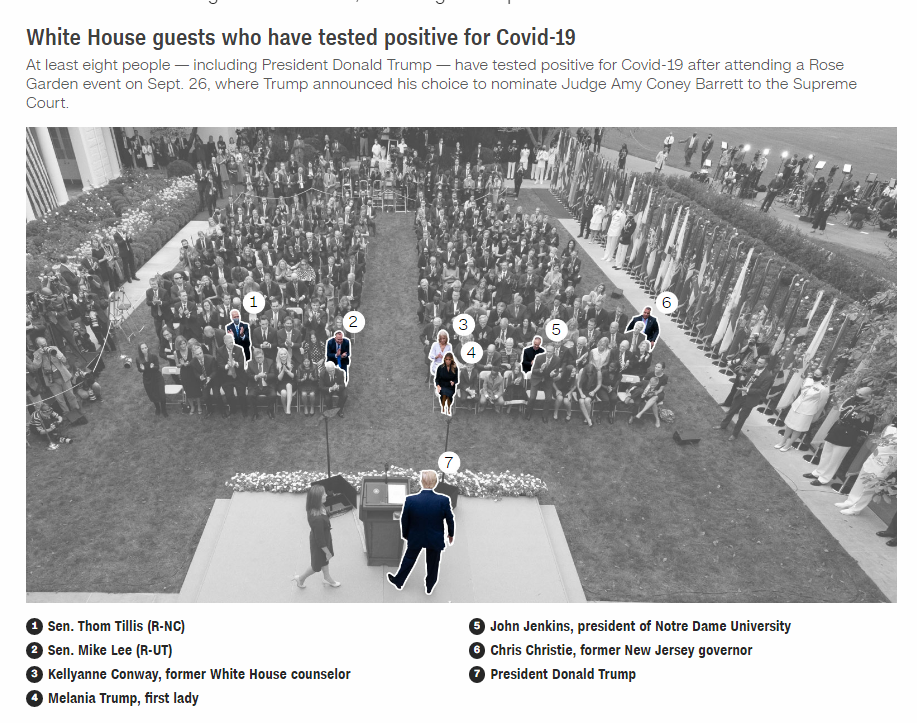 I think it was a deliberate action to get the President infected and a soft assassination attempt, the Secret Service, FBI, and DHS should investigate this very thoroughly.


Since everyone is tested before entering the Whitehouse, if they keep the swabs, it wouldn't be hard to find the spreader.

They just don't throw those out in the regular garbage. This happened to me once. I was sick and they wanted to find out when it started, they called the lab and they didn't dispose of my blood sample yet. They were able to test it about four days later.


Since everyone is tested before entering the Whitehouse, if they keep the swabs, it wouldn't be hard to find the spreader.

They just don't throw those out in the regular garbage. This happened to me once. I was sick and they wanted to find out when it started, they called the lab and they didn't dispose of my blood sample yet. They were able to test it about four days later.

Well unless they do a DNA test too... A little extra from a contaminated one would do the trick. Just touch tips....so to speak.

originally posted by: Daughter2
a reply to: Xtrozero

It appears it was spread at the Rose Garden during the nomination of ACB.

Everyone who is testing positive was at that ceremony.

Interesting no Democrats attended, they refused.

Melania was very close to Judge Barrett's family that day too. Holding hands with some of the kids I think?

None of Barrett's family are "infected" that I know of 😎

I can believe that it was an assassination attempt.

I wouldn't put anything past the leftists and establishment RINO's.

originally posted by: AdmireTheDistance
It's most likely just chance. Hell, over 40 people in my workplace alone have had the virus (all have since recovered). I certainly wouldn't rule out any sort of deliberate infection on the part of the radical left, but that would be next to impossible to prove.

Everyone will have come into contact with it at some point. Most are immune to it! Some will get minor symptoms and some will die. The people that die would have died from a bad cold or the Flu anyway.

These numbers the media and even counties are pushing are being BLOWN WAY OUT OF PROPORTION by the lying ass public hospitals just so they can milk Medicare out of Billions. Sadly some people who had no family with them or to check on them, walked into NYs public hospitals and were MURDERED just to push the lefts sick satanic lies.