President Trump and the First Lady have tested positive for Covid

Masks don't prevent people from getting COVID, they prevent them from spreading it.

He could have picked it up on his hands and then rubbed his eyes or someone could have sprayed it directly in his eyes.

*If* this was spread on purpose, I would assume it would have been spread on a surface people touch or maybe as an aerosol then it could have entered his eyes.
edit on October 4th 2020 by Daughter2 because: (no reason given)

originally posted by: Daughter2
a reply to: IAMTAT

Masks don't prevent people from getting COVID, they prevent them from spreading it.

He could have picked it up on his hands and then rubbed his eyes or someone could have sprayed it directly in his eyes.

Exactly. So why aren't we being chastised for not wearing goggles and latex gloves too?
I don't see how anyone knows that Trump didn't get it from touching a surface.

You mean THIS GUY? 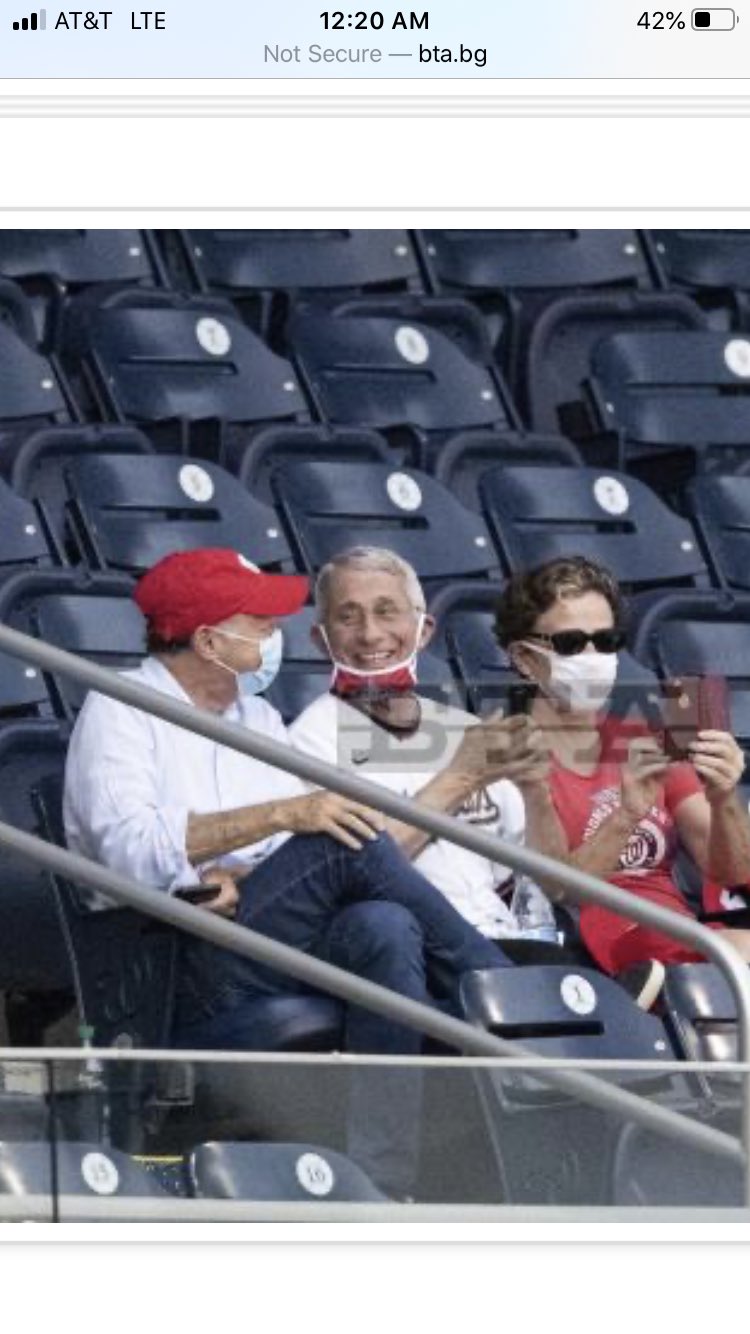 Yep, but I recall him saying something about people needing either goggles or face shields too at one point.

originally posted by: ketsuko
Meanwhile, Trump could be released from the hospital tomorrow.

“Today he feels well. He’s been up and around,” said Dr. Brian Garibaldi of Walter Reed Medical Center. “If he continues to look and feel as well as he does today our hope is that we can plan for a discharge as early as tomorrow.”

This is the first announcement of a potential release date.


This in itself is odd. In the video released didn't the President say he wanted to go the hospital? He said he didn't want to be "safe, upstairs" He wanted to be around people and basically show people he was not scared. Why would he go back to the WH?

Also there is still conflicting information. The doctor now admits he basically lied yesterday. I also read a quote where they said his organs are functioning normally and improving. How can it be both? No lung CT info? He has now taken dexamethazone which has only been proven to work in severe cases and is not recommended for any other stages.

There seems to be a lot the public is not being told.


Pressed about the conflicting information he and the White House released the previous day, Navy Cmdr. Dr. Sean Conley acknowledged that he had tried to present a rosy description of of the president’s condition.

posted on Oct, 4 2020 @ 01:57 PM
link
I find it interesting that they gave Trump sumplimental O2 with his sats at 94% when wearing a mask for long periods could lower a regular persons sats below that.

It's called "burning down one's house to prevent arson."


Most of the vulnerable already need assistance getting around day to day. They already have a caretaker. So it would be easier to have those caretakers exercise extreme caution and isolate the vulnerable otherwise than to try and isolate all of society. Eventually the virus will penetrate even those defenses, but the idea is that by the time it does there will be effective treatments available.

With the plus side that all their medical history and vulnerabilities are recorded... There's another issue. The non diagnosed who would be at serious risk of death or disability. That said I think it's better to find out you're a wildcard sooner than later.

All in all going this route could've saved a lot of lives. Just by focused care alone. Testing and PPE would've been more available in those crucial first couple of months.

A safety net for the 'wildcards' could've been set up.


I was my mother's caretaker for many years. Were she still alive, I would be paranoid about this virus around her. I hold no one in contempt for being paranoid in a similar situation. However, it has done no good to close down all of society. The only thing that has accomplished is to place more people at risk for everything from pre-existing conditions that could not be treated by law to suicides from social isolation, to an increase in domestic and child abuse, to academically stunting our already under-educated youth. None of those are positives. As I have said before, more people will die from COVID-19 who never contract it than who do.

I can't agree more with this.

The knock on effect of our overcautious governments, or should I say the way they've implemented things to slow this virus has and is having a huge detrimental effect.

Financially alone were up the creek without a paddle. I've seen far too much of the negatives you brought up already too. Things are a mess in the UK. I had worries for the future without this virus.

To end on a conspiracy note I'd say there's a couple of angles the west could shoot from to solve our resource needs and economic inflation whilst enhancing pressure on worldwide human rights. Who knows? Maybe that's why we've took such a self-depreciating approach.

One can hope. I'm envisioning further eroded rights for the individual and less restrictions on corporations. Levels of poverty that makes 2008 look like a couple of kids lost their pocket money.


At least under Trump we are finally moving in the right direction with regards to China. I have no real issue trading with them as long as the trading is fair. It has not been fair, and has consistently worsened throughout the last several decades.

I still support Trump on this. His goal might be fair trade but for goodness sake he galloped on first and opened what could've been flood gates. Where's everybody else?

We should pressure China and all her faults. Human rights is my issue... The UK gubment claims to be leaders in that field! Ha!

originally posted by: IAMTAT
POTUS (next week): "First Lady and I just beat Covid...no big deal. Feelin' great and even lost a few pounds. THANX, Hydroxychloroquine"...BTW...The Vaccine is also ready, if you want it"

What? No. I'm watching the news. You can see the anchors glee in trump having covid. You can see their disappointment as he improves. You can hear the excitement in their voice when they talk about his possible death. It was nothing to do with right wing forums. It's right there on the news.

LOL, we're just going to take your word for it? There are millions of ballots floating around. There is video evidence of fraud involving mail in ballots from prior elections. Allowing ballots after election day (when the results are tabulated) is the perfect scenario for fraud. Why else would they want to extend collection of ballots until after they know what the margin they need to defeat, is? And don't give me that clap trap about "enfranchising voters" dems don't want republicans to vote and republicans don't want dems to vote.

The whole thing is so transparently and obviously a fraud operation you can't be taken seriously if you don't see it. Put millions of unaccountable ballots in the mail system then extend the amount of time you have to gather them until after you know the result. Asinine.

Which is why the supreme court will have to throw out every single ballot that arrives after election day that wasn't a solicited ballot.

So I ask again, the question you seem incapable of answering: what are you going to do if this election is stolen?
edit on 7-10-2020 by Dfairlite because: (no reason given)

originally posted by: Dfairlite
LOL, we're just going to take your word for it?

So I ask again, the question you seem incapable of answering: what are you going to do if this election is stolen?

Nothing, since it won't but feel free to take your cues from Agent Orange and think it will. He's setting you up for the big fail so you can blame it all on the Biden Boogeyman.

Nothing, since it won't but feel free to take your cues from Agent Orange and think it will. He's setting you up for the big fail so you can blame it all on the Biden Boogeyman.

You should get out more. Biden isn't the boogeyman. Biden is the smokescreen.

originally posted by: Dfairlite
You should get out more.

I should but no one wants to see me.

Biden isn't the boogeyman. Biden is the smokescreen.

That doesn't change the fact that the election won't be 'stolen'. Get used to dealing with the results.


Or you could stand down and stand by and do whatever the Proud Soys will be doing.

I'm curious how you feel about the elections in places like turkey or maybe romania? NBD? Just legitimate elections where the results should be respected?

originally posted by: Dfairlite
I'm curious how you feel about the elections in places like turkey or maybe romania?

I don't feel anything about them, they are 100% irrelevant.

But you can worry about them if you want.

It's irrelevant that other countries have dubious elections? Not even worth looking at to see why and how they do it? Seems awfully... ignorant... to me.

originally posted by: Dfairlite
a reply to: jacobe001

What? No. I'm watching the news. You can see the anchors glee in trump having covid. You can see their disappointment as he improves. You can hear the excitement in their voice when they talk about his possible death. It was nothing to do with right wing forums. It's right there on the news.

All true. They knew a bio-attack had occurred on September 26th at the White House. Covid-19 likely was also weaponized into a targeted version. Remember how President Trump didn't shake Nancy Pelosi's hand at the State of the Union, and she immediately wiped something off? I'll stop there for now...

originally posted by: Dfairlite
It's irrelevant that other countries have dubious elections?

If the guy in the next town is a effing jerkoff does that make you one?

Not even worth looking at to see why and how they do it?

Turkey is a theocracy with a strong man dictator at this point, you figure out how the did it, if it takes you more than one second you need to upgrade your microprocessor.