President Trump and the First Lady have tested positive for Covid

posted on Oct, 2 2020 @ 10:58 AM
link
I could be wrong but as a halfassed futurist, trump will bail on the presidency because of "complications" so he won't have to suffer the indignity and shame of losing the election.

Were these red state kids openly wishing death on the Obamas? I don't see that kind of vitriol from even the adults, except in the most extreme fringes. My point is that this attitude is mainstream on the left and don't try to deny it.

originally posted by: projectvxn
We're they in their 30s and fat as hell? Because those are the people who are typically dying in those age groups.

So my son is at Pullman which is Washington State University and out in the middle of nowhere. They recently have had the highest infection rate in the world. The reason is that they are having basically Pox parties for COVID. They are spreading it like crazy...My son got it as did his two roommates very quickly...

As a group they said screw this and pushed their own herd immunity, so far no one died and no one knows a single person who had to go to the hospital as they all have the same symptoms of first day low temp, second day feel crappy and lose their sense of smell, third day they feel better and smell comes back by day 5 with zero side effects.

He said the weirdest part was the smell lost, but the flu was not even equal to a small cold. They are also not getting tested, so are not counted in the totally off totals that most likely represents a small fraction of the true total.

This just in, Ghislane Maxwell said, 'I wish him well'.

I been wishing her well for a very very long time....

This just in, Ghislane Maxwell said, 'I wish him well'.

She was so depressed upon learning of it she killed herself.


originally posted by: IAMTAT
"My fellow Americans...FLOTUS and I just beat the CHYNA VIRUS...and, together, so will we all!"

"If it weren't for you kids and that pesky dog, I would have gotten away with it!"
-LeBron James

DId I say the odds were zero?

No, I didn't. What I said is that they were remarkably, as in low like the flu. Guess what? That kills people too. You know what? This past year it killed two elementary school teachers, in the same school, who were both in their 40s about an hour from here. It was tragic.

But guess what? We don't shut down the entire world over the flu. We also don't shut down highways because an entire family dies in a car wreck either. I don't happen to know anyone who has lost their life in a car wreck, but that doesn't mean no one does or that it doesn't happen. It also doesn't mean that I'm immune to the pain of losing someone in a sudden and violent way. I had a cousin get stabbed to death, murdered. But I'm also very very aware the the odds of having another cousin die similarly are low, so I don't demand we all lock up our knives. 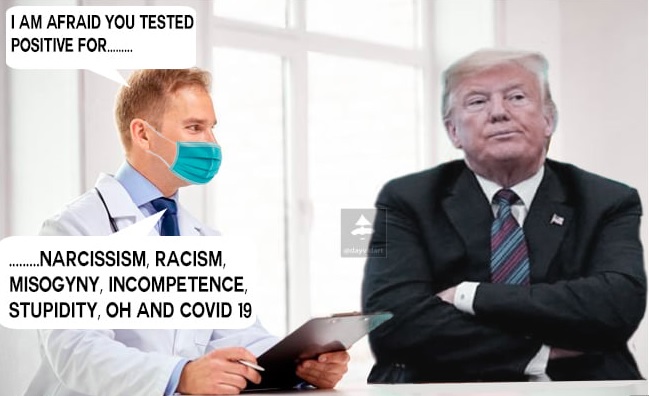 originally posted by: DBCowboy
"If it weren't for you kids and that pesky dog, I would have gotten away with it!"
-LeBron James

Unfortunately , the records got mixed up....

You, and all the other Trump haters, could only wish this would happen.

originally posted by: underpass61
a reply to: IAMTAT

Biden and his wife test negative.

I do not wish ill on Trump or his family, but I do hope more
people wear mask & wear them properly.
I really believe it helps.

Who all can honestly say that they look good naked?

If I should get an off topic it's because I keep falling
into Augustus' traps...

So many orifices'...so little time.