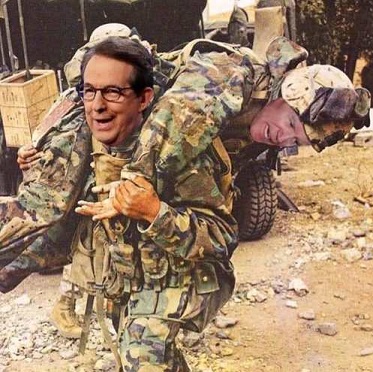 What happens when some fact-checking is done on the claims made during the Trump-Biden debate? Does the whole sweater start to unravel? I think Trump realized very early on that he had to stand his ground on two fronts: Wallace & Black-Eyed Biden.

I said in another post that the reason the debate turned into a crap storm of people talking over each other was due to false assumptions and loaded questions being tossed around (at Trump.) On the other side of the coin we had Biden plugging his ears, closing his eyes, and singing "That's not true! That's not true!" to every worthy question directed at him.

2) Biden is adamant that Hunter did not receive 3.5 million dollar payout from the wife of a former mayor in Moscow--Mawry determined, that was a lie.

3) Biden also chanted his mantra "That's not true!" while it was stated that Hunter Biden was discharged from the military for drug use--Mawry determined, that was a lie.

4) Biden did an impressive flip-flop stating he does not support the Green New Deal, however, it will magically pay for itself too.

5) Trump referred to the military as suckers and losers, right?--Wrong. It's been debunked, but not in Joe Biden's world.

6) Remember when Joe tried to say increases in violence were happening in GOP cities?--Wrong again.

7) Remember folks, Antifa is an idea, not an organization--I'll give Joe that one for free because LUL

The list is long my friends, but I expect many to play the Biden defense and close those eyes and plug those ears la-la-la-la-la.

posted on Oct, 1 2020 @ 08:40 PM
link
The biggest and most important fact to check is that Biden interrupted Trump three different times before Trump bulled over Biden and Wallace both, since it was clearly 2 vs 1 very early on in the debate.
edit on 1-10-2020 by Ahabstar because: (no reason given)

posted on Oct, 1 2020 @ 08:58 PM
link
a reply to: Ahabstar
And this is why I didn't care for watching the debate. It's a shame to the integrity that everyone has been clamoring to be sacred, even have Joe talking about how important the presidency is and how undermined its become.

Yet during an election, the integrity of an honest debate is thrown out the window and turns into a character assassination.

posted on Oct, 1 2020 @ 09:27 PM
link
I just couldn't believe how many times Biden said "that's not true" or "that's been thoroughly debunked" and not one follow up by the 'moderator'. No wonder he gets to make the decision on who is black and who is not, he obviously knows absolutely everything, one hundred percent correct, one hundred percent of the time, always and forever!

originally posted by: Oppositeoftruth
I just couldn't believe how many times Biden said "that's not true" or "that's been thoroughly debunked" and not one follow up by the 'moderator'. No wonder he gets to make the decision on who is black and who is not, he obviously knows absolutely everything, one hundred percent correct, one hundred percent of the time, always and forever!

Ehh I didn't ask a question... I get that Chris is a lib, I understand that. It was my hope that he would be an actual moderator instead of another debater. Chris should have went out there with something to prove, that he has the ability to be impartial and an actual journalist, but he just couldn't help himself.

Man, someone is lying to me...