13 foot hole in side of sunken ferry

In 1994 the ferry Estonia sank resulting in 852 deaths. Most of the bodies were never recovered due to the depth and sea condition.

Officially the bow doors were blamed for the sinking, but there were also reports of an on board explosion.

Its been confirmed that there is a 13 foot hole in the side, of the wreck but officials say that this wasn't what sank the ship.

Does anybody remember this from the time or have any useful insights into the explosion hypothesis?

I remember the sinking but I don't remember anything about there being an explosion on board. But it was a long time ago so I may simply have forgotten about it.

posted on Sep, 28 2020 @ 07:34 AM
link
I do remember this, I remember the car ramps/rear doors being blamed for apparently not being shut properly and causing it to flood and then sink.

This is the first I'd heard of an explosion, I dont even remember a conspiracy around it, except for the neglect of the doors not being closed properly.


You'd need a very large object moving quite fast to make a 13 foot hole in side of a ship like that, and the noise of the storm could cover the noise of an explosion.

Your link says clearly they think it was a collision with a submarine and not an explosion.

I do remember the door thing as well.....

It's not the sexy answer but it's the most likely one.
A heavy truck falling into a steel plate of the ship.

We need pictures.
Explosions are pretty easy to identify but since it's 25 years ago it might be harder to see.

Then where is the wreck of the submarine?

What was this a cement truck traveling at 90mph?

These ferries have to survive rough seas, they're made of tough stuff.

posted on Sep, 28 2020 @ 08:44 AM
link
I would not be surprised the way it turned that the hull was damaged. What I am surprised by is they never retrieved the bodies. Its not unreachable so why didnt they retrieve the bodies for the families?

posted on Sep, 28 2020 @ 08:48 AM
link
Something happened and they been determined to keep it secret since. I dont believe the offical narrative.

originally posted by: AaarghZombies
Then where is the wreck of the submarine?

Subs have special alloy hulls designed for great depth, punching a hole in a ferry isn't going to sink it and for security or public perception reasons they may not make the collision public. Think of the teeth pulling that was required to get the Russians to admit what happened with the K-19 or Kursk sinkings.

Citing the practical difficulties and the moral implications of raising decaying bodies from the sea floor (the majority of the bodies were never recovered), and fearing the financial burden of lifting the entire hull to the surface and the salvage operation, the Swedish government suggested burying the whole ship in situ with a shell of concrete.[33][34] As a preliminary step, thousands of tons of pebbles were dropped on the site.[32] The Estonia Agreement 1995, a treaty among Sweden, Finland, Estonia, Latvia, Poland, Denmark, Russia and the United Kingdom, declared sanctity over the site, prohibiting their citizens from even approaching the wreck.[35] The treaty is, however, only binding for citizens of the countries that are signatories. At least twice, the Swedish Navy has discovered diving operations at the wreck. The wreck is monitored by radar by the Finnish Navy.[36]

That definitely sounds like they (literally) tried to cover something up

How long is a pickup truck?
13ish feet long?

Now slide multiple other vehicles into the truck as the ship rolls on it's side and they could punch through.

Like I said...
Show up the pictures.
Let's see the hole.

Until then it's nothing more than speculation.


My guess is that explosives sinked the ship. Divers and experts say they found proof from the hole area about explosives.
edit on 28-9-2020 by Kenzo because: (no reason given)

There was a ferry that sank off of England in the 1980s, the vehicles smooshed up against the side of the vehicle deck but none penetrated the Hull. There were a lot of pictures in then media. One hypothesis is that the vehicle slamming against the side was what caused it to tip over, none went through.

I remember that one..
Like I said...
Only speculation.

I still think an explosion big enough to make that big of a hole would have been heard by someone.
As far as I know there have been no reports of that but I could be wrong.

Pressure and penetration are different things. If it made a hole that big it would have been badly damaged.

originally posted by: AaarghZombies
Pressure and penetration are different things. If it made a hole that big it would have been badly damaged.

All submarines have at least two hulls, a collision with an unarmored vessel is not going to rupture the pressure hull and compromise water tightness.

This is General Dynamics Groton drydock, can you circle the submarines visible? 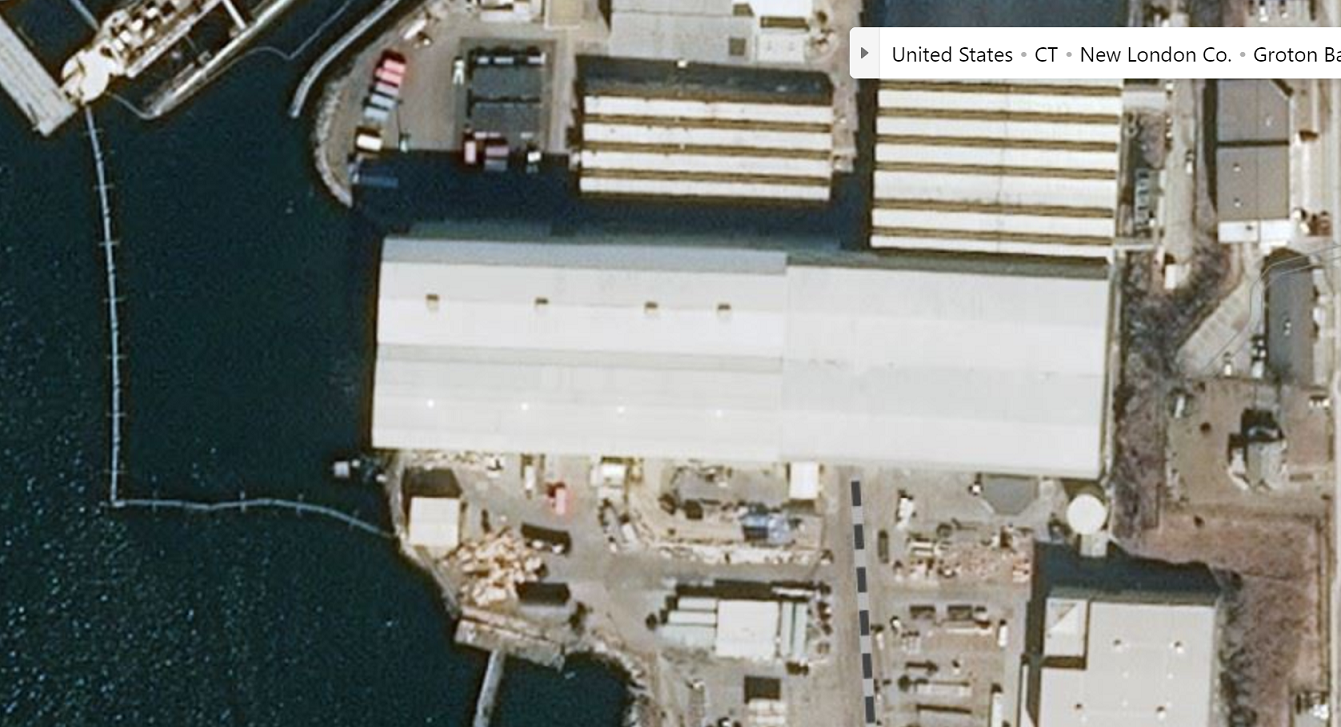