At the direction of President Trump, the White House Office of Management and Budget will move to identify and eliminate any trace of “critical race theory” in the federal government.

Critical race theory is the leftist, racist doctrine that forms the intellectual underpinnings of Black Lives Matter, Antifa, and other radical organizations currently engaged in unrest on America’s streets.

It alleges, among other things, that the United States is a white supremacist country, and that all white people are guilty of racism, whether they intend it or not. 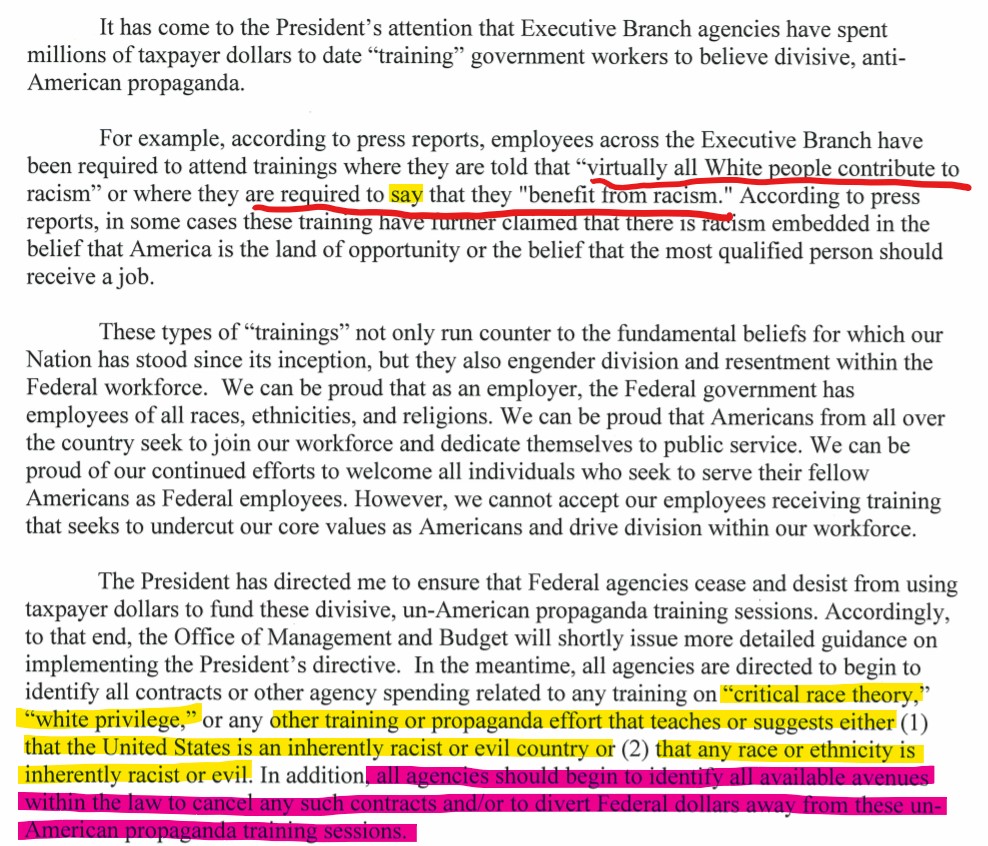 According to the memorandum, agencies are advised to identify such propaganda and cancel contracts.

Fortunately, I've never been taught anything like this and I've never received racist training here in Eastern Europe, but I'm glad things like these are finally brought up and Trump himself started doing something.

I was taught things about the complexity of my language and people, the heroes who defended my country and spread the teachings of Christianity and the contributions we made to the world. I feel bad for students in western nations who are indoctrinated into hating themselves.

I wouldn't tolerate attending training that calls me, my people, or my country evil.

What do you think, ATS?

Is it time to do the same in western public schools and universities?

They tell us constantly the way that they'll get their revolution is to apply and teach critical theory as widely as possible.

We all must become critical theorists to do it, though we will have to do away with liberalism with freedom, because then people can't choose their own things and mess up our theoretical plans for a utopian society, just like with communism, the limits of freedom in a social Justice society will be defined by critical theorists.

Their job is to do one thing: scrutinize every conceivable cultural artifact for hidden and Justices speech, food, dress, text, performance outcomes, everything the point of a critical theory is not to understand a liberal society.

Yes it’s about time but he should expect a huge pushback from the Leftist cult on this one.
It will drive them crazy if they can’t push their deranged agenda.

“I think that we’ve got to see that a riot is the language of the unheard. And, what is it that America has failed to hear? It has failed to hear that the economic plight of the Negro poor has worsened over the last few years.”
Martin Luther King Jr, 1966

For those who don't really know what it is, here is a breakdown.

1) believes racism is present in every aspect of life, every relationship, and every interaction and therefore has its advocates look for it everywhere

2) believes science, reason, and evidence are a “white” way of knowing and that storytelling and lived experience is a “black” alternative, which hurts everyone, especially black people

5) only treats race issues as “socially constructed groups,” so there are no individuals in Critical Race Theory

6) rejects all potential alternatives, like colorblindness, as forms of racism, making itself the only allowable game in town (which is totalitarian)

7) acts like anyone who disagrees with it must do so for racist and white supremacist reasons, even if those people are black (which is also totalitarian)

8) cannot be satisfied, so it becomes a kind of activist black hole that threatens to destroy everything it is introduced into

Eight years of a black president and they still haven't been heard?

It does exist and happened to me.

The racial tension was enormous, local blacks and whites were at each other's throats. The military brats were caught in the middle and befuddled at their extreme hatred and even violence toward anyone not of their race.

I know some of you won't believe it, but this really happened, I was there. This policy does more harm than good, to tell people they must be racists and spending time convincing them they are racists because of the lack of melanin in their skin.

originally posted by: xuenchen
Democrats having a sh!t hemorrhage yet ? 😆

To Democrats there is no such thing as an individual who can think for themselves.
There are only groups who must think in groupthink and the groupthink is what the liberals tell them it is.
White people are all racists and secret white supremacist's, even if they are liberal and must admit to the truth and humble themselves and feel terrible about their whiteness to atone for the sins of generations ago.
Black people belong to the Democratic Party liberals/progressives and are not really black if they think independently.
Hispanics belong to the Democratic Party and they must all be for mass illegal immigration or they betray their race.

There is no room in the Democratic Party or liberalism for anyone who dares to think for themselves or to make up their own mind on any issue. To depart from the party line is to risk doxing, social media bullying, job loss, destruction of business, a beating for wearing a symbol (hat) of disagreement with Democratic Party ideology. Thinking for oneself and having an opinion that does not 100% agree with the Democratic Party is strictly forbidden - or else.

My oldest went to Texas Tech, and came home one summer full of this horsecrap. I had to finally stop him and ask him point blank: are you calling your dad a racist in his own home? He saw my point (that he was welcome to GTFO if thats how he felt) and soften his approach.

Its taken us 6 years of occasional conversation, not always comfortable, to get him past what he was taught in university. He's still such a die hard never Trumper that he writes the name "Tr*mp". Which i ridicule him for...no free passes even if you are family.

These programs like this are all BS because there's plenty of laws.

But certain Democrat/Racist groups refuse to fight things in court.

Democrats need a dependent class in order to maintain their money laundering flow. 🚬😎

Critical Race Theory is a racist cult belief that should not be allowed into policy making positions, yet adherents have wormed their way into almost everything.

👆👆👆👆👆
This statement alone and the thinking behind it are the real problem.

originally posted by: scraedtosleep
a reply to: Anon283799


The point is to fight it in court for further exposure of all the ongoing scams !

The "EO" is just the beginning 😎

queenofswords
+12 more
posted on Sep, 5 2020 @ 11:46 AM
link
A lot of Diversity Training companies were making lots of money off this bs.

I would imagine, especially under Obama, that some of these training companies or 501(c)3's that were teaching this propaganda bs were receiving government grants.

I bet if you follow the money trail for the last several years, you would probably find some politicians and/or their family and friends owning interest in these "education" (ha!) indoctrination 501(c)3's and/or firms.

Yup. And they are dug in deep too 🤫


What do you think, ATS?