something odd i captured mowing my lawn

posted on Aug, 31 2020 @ 03:21 AM
link
i was mowing when i saw this white blob high up zipping to a from like lightning and i captured it as it was just going away. 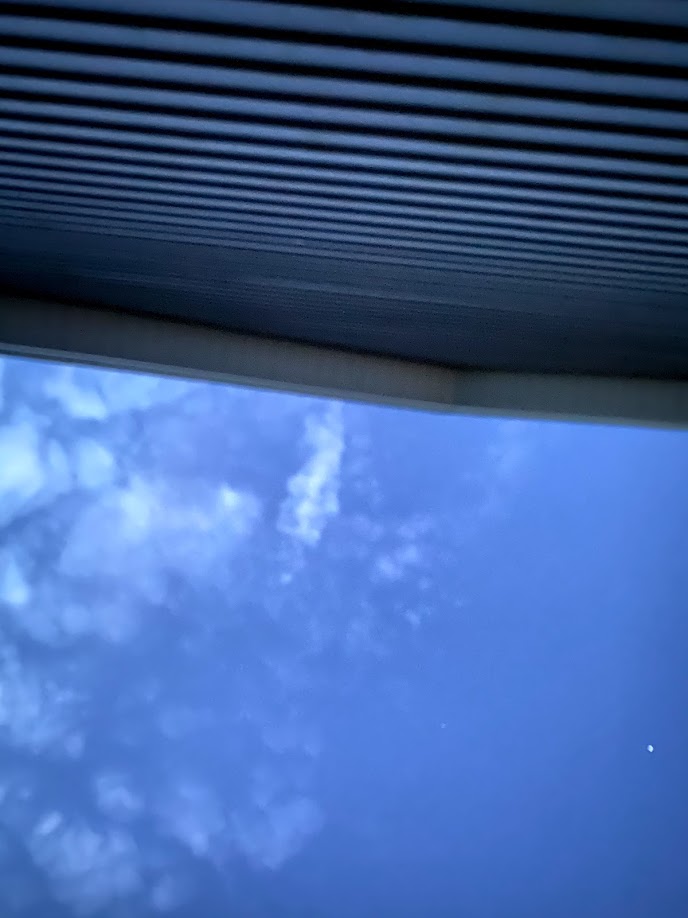 How long did it appear?
Estimated height?
Speed velocity, consistency, variations?
Brightness...were there any flashes such as to indicate shape features, ie., planes
of geometry?

How long did you watch it?
Where was it going, direction?
What do you mean when you say like lightning?

Anything would be more helpful than a minimalistic description.
We didn’t see this, you did. Help us to see it.

Nice catch..
I played around with contrast and brightness on the object.
And a strange outline appeared around the dot. 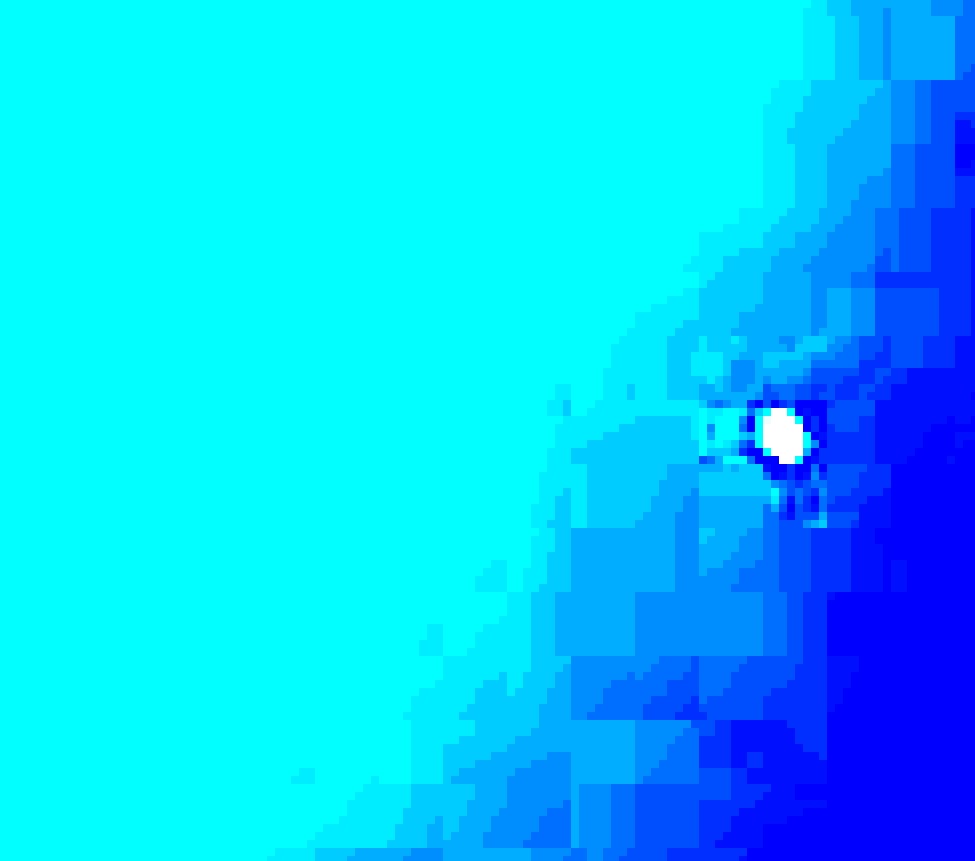 I keep hoping Bigfoot will secretly mow my lawn.

it was hard to tell how far away it really was as there was nothing to compare it with.

to my eye it looked like a white fat egg if you can picture what i mean.

there were no light only glints when it came down lower, but it fell like a falling leaf so the glints of sun drew my eye to it

it zipped around for a few seconds then fluttered down in high in that odd way and then took off as i was taking the picture.


honestly the only reason i was able to get a picture was that i had my phone playing music and i was JUST fast enough to capture it, the whole sighting was less than 15 seconds 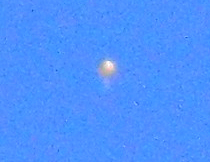 That's a real photo... enhanced from the image below (which I had to crop because ATS has a resolution limit. It was originally about 3000 pixels wide and all of it is blue sky except this little dot. 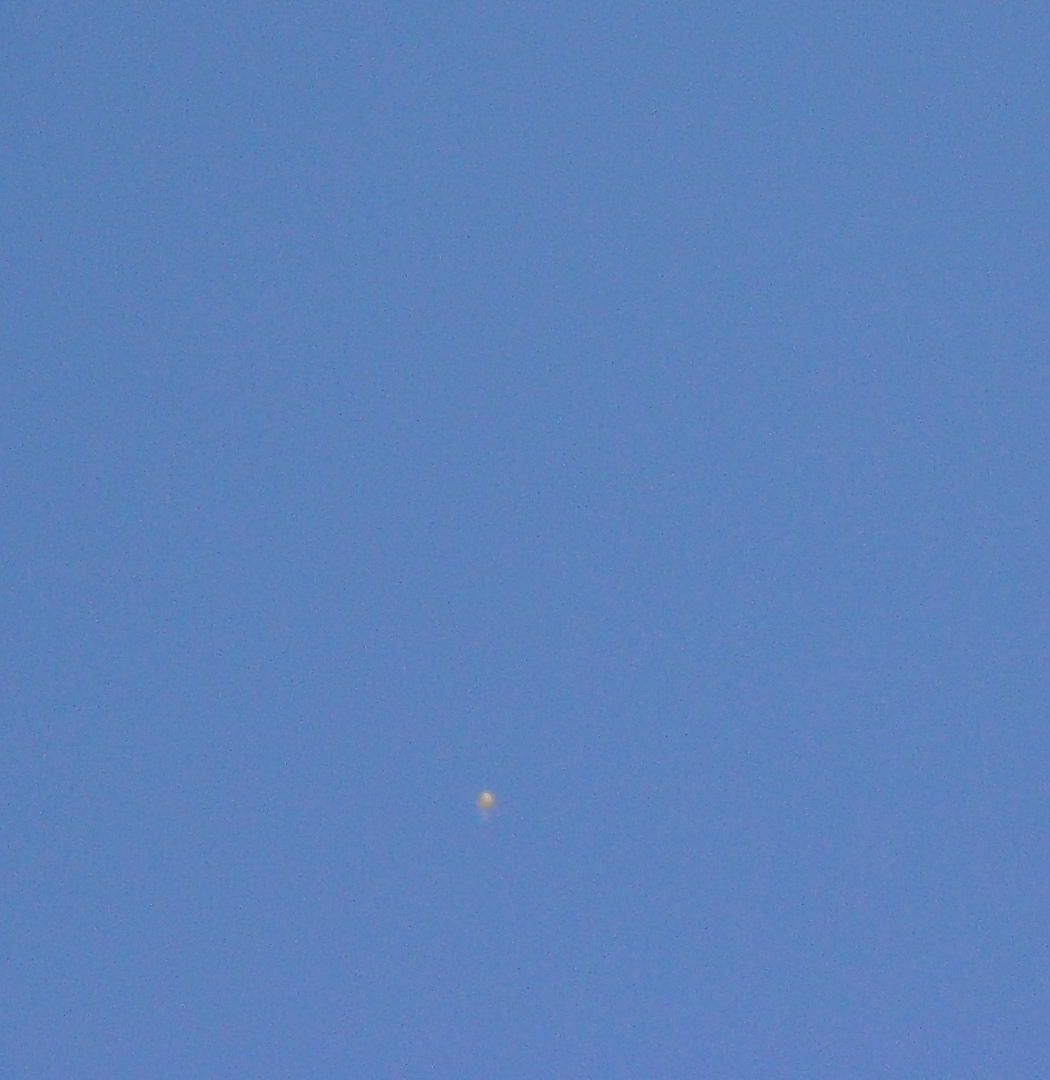 My Dad mentioned a bit of a tail on it, like a sperm. Did yours? 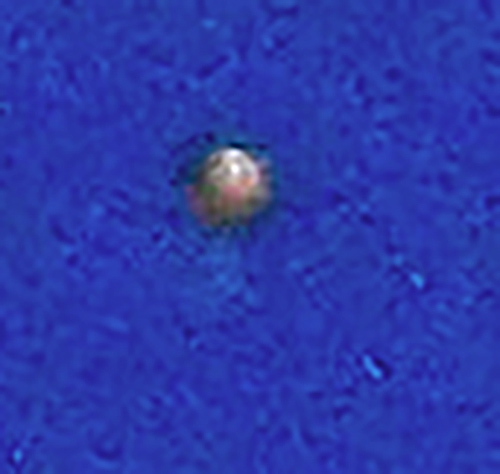 
My Dad mentioned a bit of a tail on it, like a sperm.

lol. No, he said it was very high up and moving at a high speed on a very linear path. Of course it could be a balloon of some sort I suppose, at that size, you take from it what you want. But I know my Dad is a very good observer and would know the difference. I did press him on details at the time and am pretty sure he saw something a little out of the ordinary.

p.s. It was a perfectly still summer day. Though that isn't to say high altitude winds aren't at play. But if it was that high, then if it was just a party balloon, you wouldn't see it. 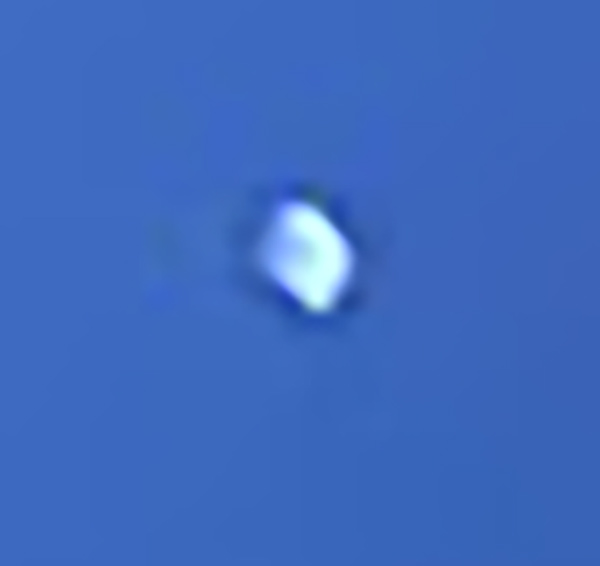 
No, he said it was very high up and moving at a high speed on a very linear path.

While walking down to the beach one fine summer day I came upon a group of people looking up with their hands shading their eyes from the Sun and pointing at the sky. I looked up but couldn't see anything. As I got closer to them I could hear comments; "It's huge!", "Look how fast it's going!"

Really curious now, I asked what they were looking at. One of them said, "It's a UFO. Look, right there." I looked. I saw. A black toy balloon about 10" in diameter and maybe 100' in the air, drifting with the wind.

An object isolated in the sky, with no points of reference, can fool the eye. The observers had made the assumption that this was a very large object. Going from that assumption, because it looked so small, it must be very high in the sky. From there, its motion must be very fast instead of just drifting with the wind, the way balloons do. As a group, they had come to the wrong conclusion about what they were looking at. Their excited chatter feeding the illusion.

I said, "Um, I think it's a balloon." There was an immediate, "Yeah, right. Look how big it is." But then there were some abashed giggles as the observers' perspective changed. The group dispersed as the balloon passed under a cloud, making it obvious what was being seen.

Your father had no points of reference. The ribbon appears to be hanging below he object.


Though that isn't to say high altitude winds aren't at play. But if it was that high, then if it was just a party balloon, you wouldn't see it.

The wind a couple of hundred feet above the surface can be quite different from that on the ground.
edit on 8/31/2020 by Phage because: (no reason given)

Oh hey for sure. You'll get no disagreement from me. That happens a lot.
To be honest Phage, I only shared that pic because I thought the OP saw a sphere. I have no info beyond the pic and what my Dad said. Bare in mind, I debunked the big balloon sighting in Cali that had everyone 100% sure they'd hit gold. It turned out to be a show balloon for some vaping company that had broken loose at a festival.

But at the same time, I've seen a flying triangle (underneith it) from about 30 meters (also seen by my other half)... I've had a joint UFO sighting with my missus of 2 spherical egg shaped craft flying silently over us in formation... I've seen a silent super bright light (my very first sighting) fly over my head and then over the horizon in less than half a second... plus others. Beyond that, my Gran had a very close sighting back in the 60s, and my Dad saw a cylinder with spheres entering it back in the 70s while playing in the middle of a local football match.

So, I suppose that I don't need to doubt the reality of "whatever they really are" being up there. The only questions I have are which ones that other people post are real... and the origin. The Triangle was military though. Plasma engines.
My experiences help in discerning what is real and what is not. I know not everyone has that luxury.

Anyway, back to your point... like I say, the scenario you mention happens a lot I'm sure.

EDIT: Out of interest, have you ever seen anything out of the ordinary? I gather you are very rational from what I've seen you post, so I'm intrigued if you've seen anything which has stumped you...
edit on 31-8-2020 by saladfingers123456 because: (no reason given)

Interesting, thank you for sharing. There is much more in the sky than just the mundane. Hope you get to see something more impressive in the future, because they/it/oddities are up there... even if they turn out to be black projects or similar.

That looks similar to what another member posted about a while back.

I can't find the post, because for whatever reason when I go to my profile page it only goes so far. However, I do still have the photo that I ran through an AI upscaler. 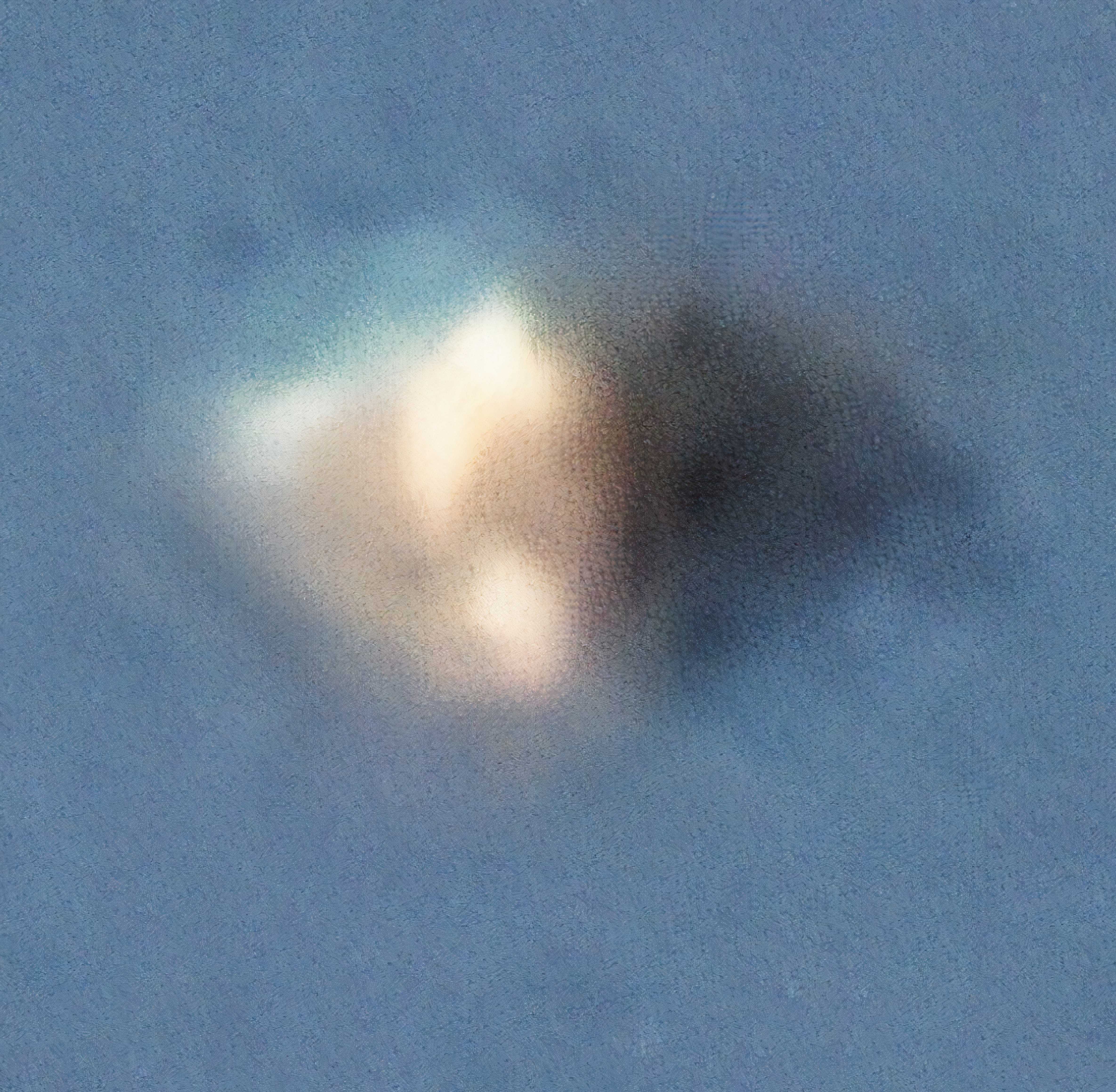 
However, I do still have the photo that I ran through an AI upscaler.


Which means that you added information which was not in the original image.

It really doesn't look any different from the original which is why I was trying to find the original thread. In it, I expressed my disatisfaction with the program for not really doing much to help make out what it is.

What I did was crop the image, blew it up, and ran it through the program. If anything it's just as fuzzy as the original.

If I'm not mistaken you also contributed in that thread, so maybe you could help out and possibly locate that thread. I tried going back in my post history, but couldn't find it. I also tried searching for it, and I went through ten pages of results and couldn't find it that way either.


If anything it's just as fuzzy as the original.


If it's something other than enlarged pixels it's inventing information that was not in the original image.
edit on 8/31/2020 by Phage because: (no reason given)


Same. I'd kill to see a solid, defined shape. Ours (wife and I) was what looked like 3 large translucent trash bags, randomly stuck together that buzzed by over head in a straight line. I can't say "floated" because that would imply a drift, both laterally and horizontally to some degree. This was in a static position, simply moving across the sky. Very interesting
edit on 1-9-2020 by TXRabbit because: (no reason given)