The fallen soldiers turned into cranes

Today I want to tell you the story of one song that has become a cult in Russia. When we hear the performance of this song, tears invariably appear in our eyes. This song is about soldiers who died defending their homeland. But they turned into white cranes and now fly over every city in Russia. This story is amazing.

The Gazdanov family from the village of Dzuarikau in North Ossetia in the Caucasus had seven sons. One died in 1941 near Moscow. Two more - during the defense of Sevastopol in 1942. After the third "death letter", his mother died. The next three sons of the Gazdanovs fell in battles in Novorossiysk, Kiev, Belarus. The village postman refused to carry the "death letter" for the last, seventh son of the Gazdanovs, who died in the capture of Berlin. And then the elders of the village themselves went into the house, where the father was sitting on the threshold with his only granddaughter in his arms: he saw them, and his heart broke ...

In 1963, an obelisk was erected in the village in the shape of a grieving mother and seven birds flying away. The Dagestani poet Rasul Gamzatov visited the monument. Impressed by this story, he wrote a poem. These are the words:

Sometimes it seems to me that the soldiers
From the bloody fields that did not come,
They did not fall into our land once,
And they turned into white cranes.

They are still from the days of those distant
They fly and give us votes.
Isn't that why it's so often and sad
Do we fall silent, looking up at the heavens?

A tired wedge flies, flies across the sky -
Flying in the fog at the end of the day
And in that order there is a small gap -
Maybe this is the place for me!

The day will come, and with a flock of cranes
I will sail in the same gray haze
From under the sky calling out like a bird
All of you whom he left on earth.

The poem caught the eye of Mark Bernes, for whom the war was a deeply personal topic. He turned to Jan Frenkel and asked him to compose music for a song on these lines.

Bernes had lung cancer. After he heard the music, he began to rush everyone. According to Frenkel, Bernes felt that there was little time left, and wanted to put an end to his life with this song. He could hardly move, but, nevertheless, on July 8, 1969, his son took him to the studio, where Bernes recorded the song. With one take.
If you listen to this song performed by him, you will feel a lot in Bernes' voice and intonations. This record really became the last in his life - Bernes died a month later, on August 16.

A few years after the song "Cranes" appeared in the battle sites of 1941-1945 and in Russian cities, stelae and monuments began to be erected, the central image of which was flying cranes.

In my city of Saratov, a monument "Cranes" was also built on Sokolovaya Gora in memory of all the inhabitants of the city who died for their Motherland. 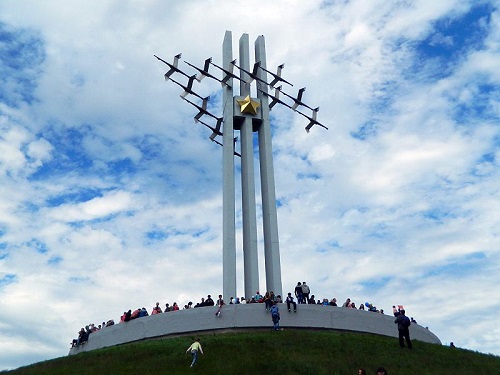 posted on Aug, 31 2020 @ 05:57 AM
link
The song certainly has a sad feel to it but very pleasant.
I like the strings they remind me of older Country Music and movies here in the US.

originally posted by: Iamonlyhuman
What a touching story! Thank you OP!

Thank. I think that we need to know each other's cultures in order to better understand.))