posted on Aug, 8 2020 @ 04:08 AM
link
This is what I think The Phoenix incident was all about. It was even tossed out as a possibility on a UFO Hunters episode on The Phoenix Lights. Testing a new toy in a real life situation.

Plus every time I think about what it was I see this thing in my mind's eye. 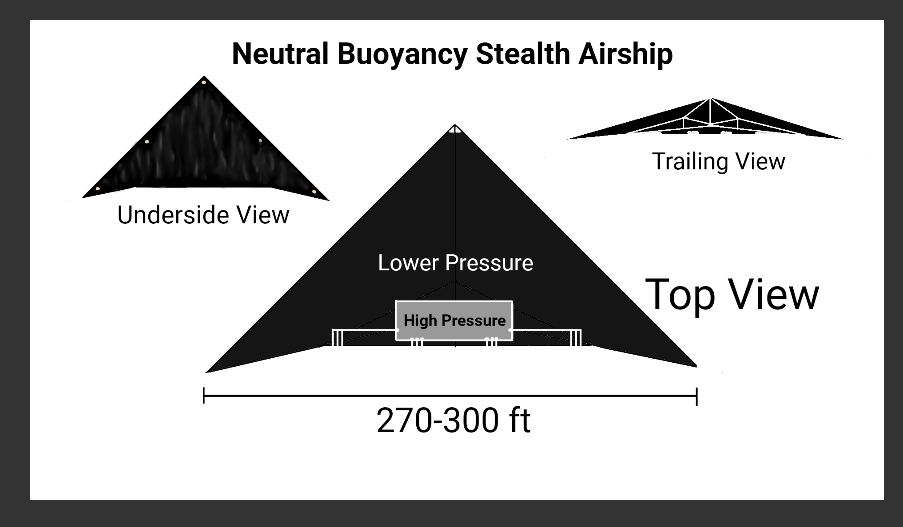 * This was increased significantly when I double checked the timeline 45 minutes ago. That will contradict a previous post.

I see It handling like a flying wing. Trailing edge control surfaces (flaps/rudder) and ailerons. With a rigid light carbon airframe, neutral buoyancy, and aerodynamic flight characteristics of a jet powered flying wing I see it comparing almost to B2 in performance.

That's about how long a 737 flight takes.

The propulsion system was decribed by eyewitnesses as sounding like rushing air.

As the picture displays I really think it may be that simple. An vessel inside the vessel (located in the center) with compressed pressure levels. There would need to be plenty of calculations of compressed weight vs buoyancy (to keep it neutral) and you'd need transfer ability back into the main ballast area if needed.

Perhaps a simple valve/chamber similar to a jet, only conceptually like letting air out of a balloon (or helium out of the tank). How much thrust can be achieved by helium release alone may be comparable to passager jets with Turbofan engines, especially if what it's propelling carries no resting weight.

Given how ghostly it could be this could be a deadly stealth aircraft that flies below 1000 feet and does about anything from; reconnaissance; to payload delivery, to screwing with thousands of people's heads.

This isn't as cool as ion propulsion (different type of wind propulsion) or an electromagnetic centrifuge but still a very simple and possibly effective vehicle.

But I know next nothing about jet or air propulsion and aeronautical engineering so it could also be BS. What i suggest may be well out of the range of airship tedchnology and I just made myself look ignorant.

But I cant see anything ruling it out so long as its aerodynamic as a B2, large enough for neutral buoyancy, and has significant enough propulsion.

Flight characteristics and requirements for takeoff.

To my guess you would want something large enough to be neutrally buoyant filled to 90% capacity. You'd need to incorporate the weight of the tanks holding the compressed helium which I can't imagine adding much more weight than the rigid frame keeping the shape of a stealth hydrofoil.

It would need to be huge. With the displacement approaching that of a small zeppelln.

I see It just lifting up like a blimp balancing out it's weight. And taking off like it's on a hover runway.

Then it becomes an airplane in how it maneuvers.

Once again, please tell me where I'm stupid or missing why this is impossible because I'd rather know why I am idiot.

I rest this on an assumption it is easier to propel because it's essentially weightless. Am I making a false assumption?

Is this hybrid aircraft I am imagining even possible?
edit on 8-8-2020 by Degradation33 because: (no reason given)

Perhaps hydrogen? It's half the weight and a small amount of lift is gained.

How big of a displacement and how light the materials would need to be may make this beyond reach. How much does a zeppelins structure weigh?

It appears I have to do math.

A stealth shape is easy and triangular shapes are strong. Assuming equal framework is needed to form the frame (triangles instead of spine and ribs), plus a 20 tons of extra weight, I feel I can safely speculate 30 tons (60,000 pounds) as it's uninflated weight if the lightest strongest possible materials are used.

originally posted by: TheConstruKctionofLight
a reply to: Degradation33

Yep....that didnt go so well for the Hindenburg

Ok you"ve thought much of this. You've got lift but what then? How far would you get using the expelled gas like a toy balloon? You need powered flight, no?

posted on Aug, 8 2020 @ 08:28 AM
link
OOOOOoo, stealth airship? About as stealthy as a Polar Bear at a Penguins marriage. You do know what the word stealth means. Then there's the little hiccup of just one missile and "poof"

posted on Aug, 8 2020 @ 10:37 AM
link
You do not need to make the entire airship rigid, just the leading edge; drag, which would limit performance, can be managed over the remaining surfaces, as laminar flow, “electrically”.

Lighter than Air Vehicles are, by their very nature, “stealthy”.

With a neutrally buoyant craft, the propulsion system need only propel the craft, lift is provided by the nature of the vehicle itself, so the engines do not have to be as powerful as would be expected given the size of the craft, assuming mass and drag are managed; a neutrally buoyant vehicle will still have mass, and its propulsion system will have to overcome
the inertia of that mass.

Rather than jets of compressed gas, I would suggest electric ducted-fan motors, at least for low altitude propulsion and maneuvering; they would be quiet (much of their noise would be attenuated by the gas in the lifting cells, depending on their placement), and they could be powered by electricity generated by thin-film PV cells on the craft’s generous upper surfaces.

Yes, vehicles of this general design have been in development for some years, and are currently being tested as prototypes. I know of one program currently operating out of northern NV.

originally posted by: crayzeed
OOOOOoo, stealth airship? About as stealthy as a Polar Bear at a Penguins marriage. You do know what the word stealth means. Then there's the little hiccup of just one missile and "poof"

If you can’t see it, can’t hear it, and don’t know to look for it; you’ll probably never find it.

And a typical missile would likely pass right through an airstrip and never notice it any more than if it passed through a party balloon.

The airship would just go on about its business with one less lifting cell.

You should brush up on your knowledge of LAV’s and their design.

posted on Aug, 8 2020 @ 01:18 PM
link
Sounds like the perfect craft for when noise/heat are the enemies and you have plenty of time to just basically glide in a bit like an helicopter in that you have 3d control and it would be pretty cheap so could be used as a one way item with conventional pickup once the jobs done and the SF teams have blown the place up.

Could also sit closer to the action as a relay station for data as if remotely operated with virtually no need to refuel probably for weeks would be like having an f35 etc .

edit on 9-8-2020 by mysterioustranger because: (no reason given)

posted on Aug, 28 2020 @ 06:33 AM
link
Thing thats gets me is the apparent sudden increase of speed these things seem to have..Never seen the Good Year Blimp hit over 500mph.

originally posted by: Blackfinger
Thing thats gets me is the apparent sudden increase of speed these things seem to have..Never seen the Good Year Blimp hit over 500mph.

The Goodyear blimp’s “envelope” was never designed to generate lift. In fact, it’s design provides for only minimal aerodynamics for pitch and yaw.

Back in the early 1960’s there were designs out of NASA for an inflatable “hang-glider” - like steerable recovery system which would have (theoretically) allowed re-entering space capsules to “fly” to a recovery point.

posted on Oct, 13 2020 @ 02:11 AM
link
Assuming the US has a material of significant strength it could fill the airship with a vacuum. As for propulsion it would be non traditional and involve noise canceling beyond any publicly known form - It could be designed like an aircraft and could travel at high speeds.

It may be possible to use ground effects and temperature variations on the upper and lower sides to boost lift and provide some sort of thrust through valves.

Also assuming it's purpose is to house a central piloting and sensor unit I assume it could be extremely light, compared with traditional ships. A triangle could be an assembly of carbon tube triangles for strength and weight.

The Atlas helicopter is larger than a 747 but only weighs 120 pounds, stretch a skin over that and triple the size and it's still half the weight of a Honda accord.

posted on Oct, 19 2020 @ 05:35 PM
link
With 3d printing you can print the interior of parts with hollow chambers and fill with helium or as you say a vacuum.

at sufficient altitude almost invisible to the eye and ear.
best chance for other aircraft to visually see but air supremacy might prevent.

hide in the clouds during the day.

US Navy had airships on the 20s and 30s. they were able to sneak over and 'bomb' ships during wargames.
US never went all in on rigid airships but used smaller ('blimps') as antisub in WWII.