originally posted by: dug88
Just seen thisband thought i'd post it here. Seems odd with everything going on lately. 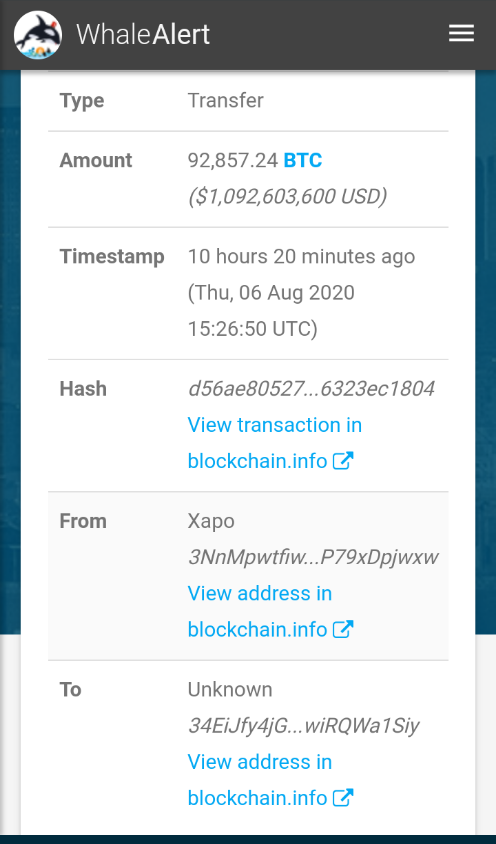 Over $1Billion was just transferred between two bitcoin wallets. Somebody just dropped over a billion dollars on something 10 hours ago. Keep an eye on big happenings soon.

How does this rank on largest transfers in the history of bitcoin?

That is a definitely a pucker worthy moment.....

Strange that this happen near the same time that this transfer of funds occurred. Something else to think about. Jerry Jones is a big supporter of Trump, and an article from Sports Illistrated has noted (as seen here):


“It’s just hypocritical,” Popovich said in an interview with columnist Maureen Dowd of the New York Times. “It’s incongruent. It doesn’t make sense. People aren’t blind. Do you go to your staff and your players and talk about injustices and democracy and how to protest? I don’t get it. I think they put themselves in a position that’s untenable.”

Jones (who has remained silent regarding this period of civil unrest) and Kraft are among the NFL owners who have given financial support to President Trump, who in Popovich's view is on the wrong side of this issue - and most others.

So was this transfer made by Jones?
If so did he have the key stored in Seattle Wa?
Is something going to happen in Seattle this weekend that would have prevented Jones from getting this key out of there afterwards?

Or is the strange appearance of Jerry Jones' mega yacht, this massive transfer of fund through BitCoin, and the possibility of something bad happening this weekend all unconnected?


That's not very close to $1 billion.

Jerry already owns the boat. he used it to travel to Seattle. The transfer had nothing to do with the boat, other than using it to travel to Seattle. Maybe he needed the money to buy some Poi and wanted to make sure he had the funds for it before he left to go there. Who knows, that's why I speculated above.
edit on 6-8-2020 by Guyfriday because: (no reason given)

The "location" of a key means nothing in any kind of crypto currency, unless you are stupid enough to write it down somewhere and leave it in a physical location.

Then somehow the $1B has something to do with Jerry.

Are you sure your dots are numbered correctly?
edit on 8/6/2020 by Phage because: (no reason given)

posted on Aug, 6 2020 @ 11:46 PM
link
a reply to: charlyv
There are a number of international banks the operate out of Seattle, but who knows.

a reply to: Phage
I was using "Dippin' Dots" and some of them melted. The connection was that Jerry has the access to that kind of money, and that his appearance happened to take place at the same time this transfer took place. Add those two points with the point that Seattle has quick access to physical International banks (Brick and Morter Buildings)

I think the concurrence of Jerry Jones showing up at the same time that this massive transfer of fund took place isn't something that should be over looked. I get where you're coming from though, sometimes things just happen at the same times. I just wanted to point out the possibility.

posted on Aug, 7 2020 @ 03:12 AM
link
I recently wrote a story about a guy being in a coma for 8 years and waking up to be a Bitcoin billionaire but I promise guys it wasn't me.

originally posted by: infolurker
a reply to: dug88

Sorry. Will have to apologize for bragging a tiny bit, on that epicurean forum.

Otherwise very pleased with the transaction.
Thank-you very much !
Am sure my guests will thoroughly enjoy our Komodo-Dragon feast, upon the autumn equinox.

You sell them just like stocks and have the dollars deposited into the account(s) of your choice after they settle?

You use a stock broker?

Most exchanges will have a limit on how much bitcoin you can sell. Besides, you don't have to cash out bitcoin. Bitcoin is equal to bitcoin and can be spent as such.

posted on Aug, 7 2020 @ 09:55 AM
link
I don't know much about bitcoin, but shouldn't we be looking at who handles that large of bitcoin? If most have a limit to transfers? This was one transfer, not multiple little ones.

Bitcoin is data on a blockchain. "moving" bitcoin requires a bitcoin wallet address to move it to. That's it.

What's great about crypto is that YOU are the bank.

posted on Aug, 7 2020 @ 11:32 AM
link
This is probably a wallet for a crypto exchange or something like that. I doubt the transfer is an actual business transaction of some kind. Probably just a security update.

That makes the most sense to me.

originally posted by: SouthernForkway26
This is probably a wallet for a crypto exchange or something like that. I doubt the transfer is an actual business transaction of some kind. Probably just a security update.

Yeah thats what I said earlier in the thread, its probably a transfer for security purposes.

To countreract what you said though, its not really that private, no crypto really is. Theres always an "off-ramp" and you can eventually be discovered that way.

-The person earlier mentioned a "sell limit." As they said, this is in reference to exchanges. If you want to exchange your Bitcoin for US dollars or any other currency, you sign up for an account on an exchange (just like an etrade or robinhood account) and you can sell your Bitcoin on the open market for whatever fiat or crypto your heart desires. The exchanges sometimes wont allow sell orders of a certain size, because it would be akin to.. say.. Jeff Bezos selling all his Amazon shares on Etrade... its not liquid enough and would crash everything. Plus theres all types of laws for cash transactions that large.

-1 Billion dollars worth is ALOT of bitcoin, especially if its from an UNKNOWN wallet, as many of the massive wallets have known owners, so its really intriguing to think who could be making this transfer...

As I and others stated, its probably an Exchanges wallet, and theyre just transferring for security...

However... most exchange wallets are known...

So it could be some mystery billionaire out there.

As @projectvxn said.. when you have THAT much bitcoin, selling it for another currency hurts both YOU and the market. It will devalue youre own holdings. What is 1000x smarter, is to actually purchase assets with the btc directly, this actually increases its value.