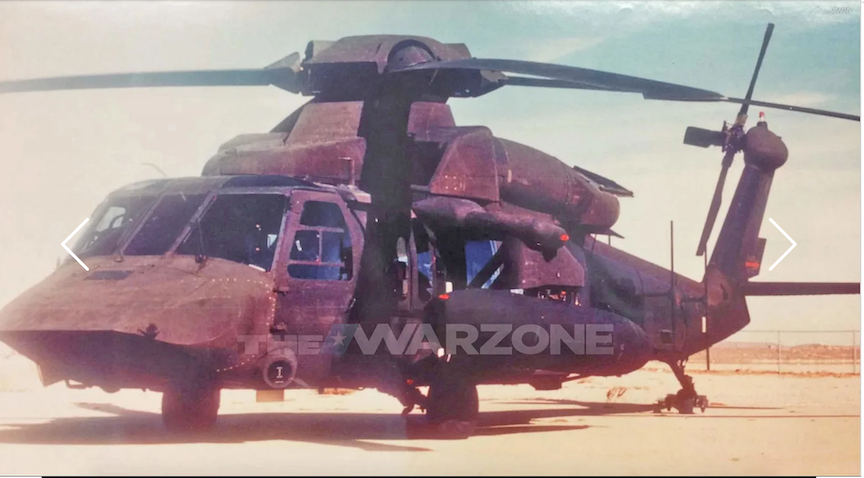 The Drive's Warzone seems to have tracked down this picture of a stealthed up blackhawk. The picture is, as the authors state, undated. It does look...older for some reason. I could be wrong there.

That said, the bird definitely looks interesting. However, I see a nontrivial difference between the tail section left behind at the bin Laden raid and the one show here. That would suggest, to me, the stealth hawk above is an older prototype or at least version than that used. That should not be a surprise if the stealthy SOF black hawks go back far enough. I'd assume so, but you know what they say about assuming.

What else do we see?

The quietest helicopter I’ve ever been around is the K-Max. Not only can it haul a heavy load, it can do it very quietly.

That is not a stealth helicopter.

It still has the HIRSS exhaust system. It's a modified H60L. There's nothing stealth about it.

What it is modified for is unknown to me. It is definitely an older model and with the antenna package, it may have been used for electronic surveillance.

This is definitely not a new model aircraft BTW. This image is old. It could actually be old Sikorsky imagery from the UH60Y prototype, but I'm not sure when HIRSS was introduced so don't quote me on that.

Right now HIRSS are being phased out and it is an old system.

They have a second image of an EH60 at the middle of the article. That is a EH60A.

The dust covers you're seeing in the OPs photo are for desert use. Either this photo was taken in during the Gulf War or it was taken in a desert facility somewhere in the US where those would be necessary.

The hydraulic deck cover is different and so is the rotor head. Looks like the old covers from the 60Y prototype days.
edit on 8 4 2020 by projectvxn because: (no reason given)

Not saying you're wrong, but do you have an image of the dust covers that match what you are saying? My google search has come up empty so far.

Just as an aside, I am a former UH60L/M crew chief and door gunner.

The stealth versions are insanely quiet. I had what I suspect is one go over me one night, and until it was almost directly overhead I couldn't hear a damn thing. Even straight overhead it was hard to hear.

We had the carcass of a Comanche at Fort Eustis when I went through the 60 pipeline.

It was a hell of a beast. I would love to see them still flying around.

and the changes to the rotors? that's nontrivial.

They almost look like L model rotor blades. I'm not seeing silencer caps on the tip caps. The covers on the cuffs are concealing the BIM indicators. Those blades are nitrogen filled. The tail rotor has no modification that I can see. What I see are covers placed over the rotor head, blade cuffs & BIM indicators, and a hydraulic deck cover that conceals the shaft extension on the rotor head. It looks like they tried to make a nonstealth aircraft more stealthy.

This thing is pretty confusing to be honest.

I have the feeling this was more of something like the F-15SE, and an attempt to reduce the RCS, rather than to become something truly stealthy.
edit on 8/4/2020 by Zaphod58 because: (no reason given)

In 'nam they used those little bird(not sure the name exactly) that had a really good 'muffler' for lack if a better word. the men who used them(mostly sheeps) said they could get right up on the Viet Cong

i would imagine a chopper with a good sound suppression system(passive and active) would be VERY quite and would only hear the the noise of the rotor wash.

I've seen the Little Birds up close and they are extremely quiet. They used them to raid an Iranian oil platform and were able to get right up close to them before being heard. Compared to the one I saw a couple months ago, they sound like a Huey.

I know I'm late to the game on this one, but I have a question/comment.

I recall a conversation years ago with someone that worked for one of the Big 3 auto manufacturers and they said that towards the end of a production run, when you had odd numbers of parts available that didn't normally go together on a particular vehicle, the boys at the factory would sometimes wing it and throw together a car that had a few oddities, ie. an engine/carb/transmission combination that wasn't normally offered in that model.

Is it possible aircraft manufacturers screw around in such a manner after they've finished a production run, just tinkering and seeing what they can put together?

Unfortunately, it probably doesn't happen too often. Parts on aircraft are tightly controlled and audited. NTSB and the FAA would flip out if something like that ever got built with the intent to fly without the prototyping and airworthiness testing. This is not to say that they don't experiment. Those experiments are also tightly controlled as well.
edit on 8 7 2020 by projectvxn because: (no reason given)

originally posted by: projectvxn
a reply to: face23785

Unfortunately, it probably doesn't happen too often. Parts on aircraft are tightly controlled and audited. NTSB and the FAA would flip out if something like that ever got built with the intent to fly without the prototyping and airworthiness testing. This is not to say that they don't experiment. Those experiments are also tightly controlled as well.

At the time, Marvel was interested in the latest Military equipment so they can juice it up for the movies, at the time, the F22 and Commanche were at the forefront.

Both prototypes are on display at the museum at Ft Rucker.

Looks to me like they changed out some panels and covers with something synthetic, sides and nose. The rotor head is covered with plastic fairings.

Somebody mentioned the tail rotor section at the Pakistani raid. Those were fake as hell.