posted on Aug, 4 2020 @ 11:08 AM
link
Breaking now...an enormous explosion was reported in Beirut Lebanon.
The explosion is so large...it looks like a mushroom cloud above the city. 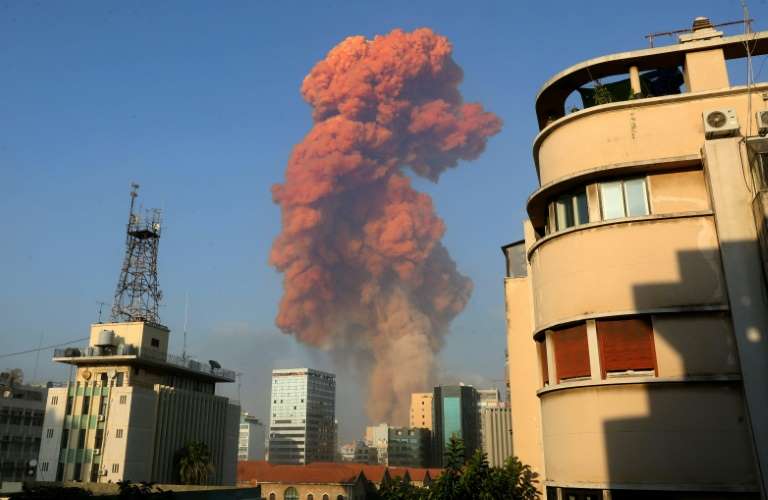 The loud blast in Beirut's port area was felt across large parts of the city and some districts lost electricity.

Preliminary reports by local Lebanese media said the blast may have been the result of an incident at Beirut port.

"Buildings are shaking," tweeted one resident, while another wrote: "An enormous, deafening explosion just engulfed Beirut. Heard it from miles away".

That is a hell of explosion (actually there was 2), but the second was caught on film and it wiped out what looked like a 20/30 story building.

Someone also mentioned it may have been from a jet.

Definitely more than one plume.

posted on Aug, 4 2020 @ 11:26 AM
link
a reply to: IAMTAT
I remember that happening.
I had some friends in the barracks there.
History rhymes.

posted on Aug, 4 2020 @ 11:29 AM
link
Clearly a meth house catastrophe. Lebanon these days is too irrelevant for anything else 😁

The plume at the start could easily have been from a jet strike, the resulting explosion could be a secondary effect from it, especially if, as some have mentioned, there was a weapons depot close by.

Obviously all just speculation at the moment

Reminds me of the initial part of a mini-nuke blast.


A UN tribunal is due to issue its verdict in the trial of four suspects in the murder by car bomb of Hariri.
All four are members of the Iranian-backed Hezbollah group, which has consistently denied any role in Hariri's death. They are being tried in absentia and the verdict is due on Friday.
The possible second explosion was reported to be at the Hariri residence in the city.

posted on Aug, 4 2020 @ 11:38 AM
link
a reply to: carewemust
The color or the smoke could maybe indicate the materials ,but yea looks like a nuke in some ways?
Speculation goes fireworks, but that will soon change to something else I guess?

That's obviously a high explosive detonation--probably military grade. That would suggest military ordnance, either in a ship or in a dockside warehouse. That would suggest perhaps somebody clandestinely preventing munitions from getting shipped through the port to their end user, whoever that might be.

The Mideast being what it is, the initiator could be any one of several different players.

Or, it could just be an accident, but this is a conspiracy website, after all......

posted on Aug, 4 2020 @ 11:49 AM
link
That was not a nuke.
The fire obviously built pressure in something that finally popped.
The color of the flames don't look like a high explosive either.

Since there were people filming the initial fire next door. I'm sure we'll see more video clips of the second explosion.

Lebanon's Health Minister Hamad Hasan said an explosion in central Beirut on Tuesday had caused a "very high number of injuries" and extensive damage, Lebanese LBC television channel quoted the minister as saying. Its state news agency NNA and two security sources said the blast had occurred in the port area where there are warehouses housing explosives. It was not immediately clear what caused the blast or what kind of explosives were in the warehouses.

that is a big explosion.

posted on Aug, 4 2020 @ 12:05 PM
link
I was able to slow the video down. It looks like a ship went up. The initial explosion the brown cloud and then water thrown up by the shock wave, the white mist. My best guess would be ammonium nitrate fertilizer.

Just heard on skynews that officials are saying there's a warehouse in the area storing fireworks but from the video thats playing, it looks like more than fireworks caused that explosion

Well, they ARE explosives that don't do anything entertaining until they explode. One can take off a hand, a couple can kill a human holding them, a bunch would certainly be capable of leveling something. I'd imagine with enough in one spot like a warehouse, "bomb-like" is apt.

Edit: Also, it being a port and a foreign one at that, and you have a wide variety of everything that can catch or go boom crammed into the export storage area.

Grain silos is something people keep mentioning, but no one really knows just how explosive silo dust is. Silo dust can generate MASSIVE explosions, we've had more than a few of those right here in the US. They're rare anymore, but they did used to be more common (relatively speaking) My dad farmed, but never farmed grain or feed corn, because he knew full well the spark & boom risks -- he avoided that area of farming and just stuck with many acres of veggies and small herds to cull.

Some of the boom being kicked off by igniting silo dust wouldn't be unheard of. It's happened many times before elsewhere.